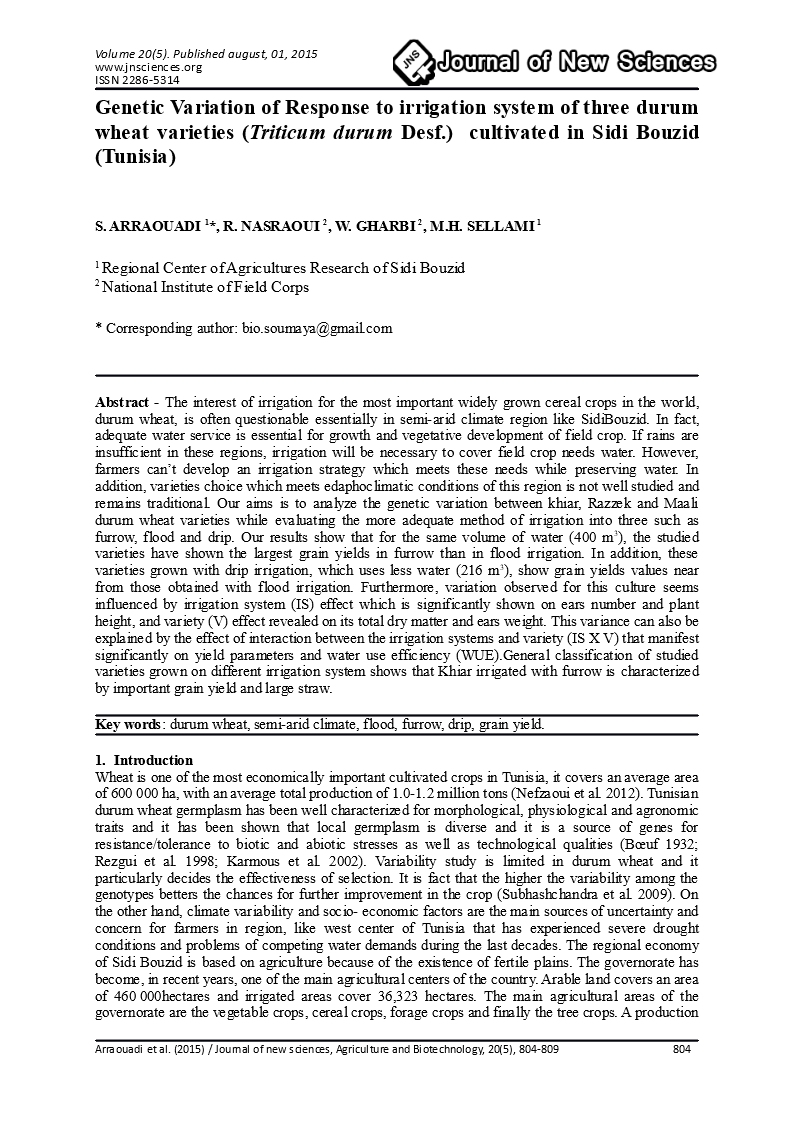 Abstract - The interest of irrigation for the most important widely grown cereal crops in the world, durum wheat, is often questionable essentially in semi-arid climate region like SidiBouzid. In fact, adequate water service is essential for growth and vegetative development of field crop. If rains are insufficient in these regions, irrigation will be necessary to cover field crop needs water. However, farmers can’t develop an irrigation strategy which meets these needs while preserving water. In addition, varieties choice which meets edaphoclimatic conditions of this region is not well studied and remains traditional. Our aims is to analyze the genetic variation between khiar, Razzek and Maali durum wheat varieties while evaluating the more adequate method of irrigation into three such as furrow, flood and drip. Our results show that for the same volume of water (400 m3), the studied varieties have shown the largest grain yields in furrow than in flood irrigation. In addition, these varieties grown with drip irrigation, which uses less water (216 m3), show grain yields values near from those obtained with flood irrigation. Furthermore, variation observed for this culture seems influenced by irrigation system (IS) effect which is significantly shown on ears number and plant height, and variety (V) effect revealed on its total dry matter and ears weight. This variance can also be explained by the effect of interaction between the irrigation systems and variety (IS X V) that manifest significantly on yield parameters and water use efficiency (WUE).General classification of studied varieties grown on different irrigation system shows that Khiar irrigated with furrow is characterized by important grain yield and large straw.

Wheat is one of the most economically important cultivated crops in Tunisia, it covers an average area of 600 000 ha, with an average total production of 1.0-1.2 million tons (Nefzaoui et al. 2012). Tunisian durum wheat germplasm has been well characterized for morphological, physiological and agronomic traits and it has been shown that local germplasm is diverse and it is a source of genes for resistance/tolerance to biotic and abiotic stresses as well as technological qualities (Bœuf 1932; Rezgui et al. 1998; Karmous et al. 2002). Variability study is limited in durum wheat and it particularly decides the effectiveness of selection. It is fact that the higher the variability among the genotypes betters the chances for further improvement in the crop (Subhashchandra et al. 2009). On the other hand, climate variability and socio- economic factors are the main sources of uncertainty and concern for farmers in region, like west center of Tunisia that has experienced severe drought conditions and problems of competing water demands during the last decades. The regional economy of Sidi Bouzid is based on agriculture because of the existence of fertile plains. The governorate has become, in recent years, one of the main agricultural centers of the country. Arable land covers an area of 460 000hectares and irrigated areas cover 36,323 hectares. The main agricultural areas of the governorate are the vegetable crops, cereal crops, forage crops and finally the tree crops. A production of 41000 t/year for cereal crops was in irrigated zones of Sidi Bouzid region. On the other hand, durum wheat production must be simulated under future climate change conditions to evaluate the effects of increased maximum temperature and high rainfall variability on crop yield, and the adaptability of the crop response. In fact, water demand growth in urban, industrial, agricultural and environmental sections creates more competition for the limited and degraded water resources. Hence, it is crucial to plan accurately water resources distribution and allocation to attain sustainable agriculture. Where pests and diseases are controlled and nitrogen is not a limiting factor, water management is the main factor influencing yield for a given environment. This research aims to evaluate the agronomic diversity with three different method of irrigation of khiar, Razzek and Maali durum wheat varieties cultivated in SidiBouzid region of Tunisia.

The field experiments were carried out on a silt loam soil plots (7.68% clay, 69.60% silt and 22.62% sand) located at Om Laadham station of Sidi Bouzid (Tunisia). This study was conducted during the 2013-2014 company characterized by climatic variation expressed by rainfall, temperature and evapotranspiration (ET0) which are shown in Figure 1.

These climate data were monitored at a weather station situated in the experimental station. The three studied varieties of durum wheat (Table 1) were grown under three irrigation methods. Each studied varieties irrigated by flood and drip irrigation were repeated 4 times at random and seeded on 6 lines in block sizes 2m / 7m. However those irrigated by furrow irrigation were sown on 3 lines per stripe. Fertilization doses were adapted to plant requirements as three adding of amonitrate 33.5% at 3 leaves stage, heading stage and elongation. To determine areal dry weight (ADW), weight of ear (WE), number of ear (NbE), height of plant (H), grain weight (GW), grain number (GNb), weight of thousands grain (PMG), the grain yield (GY) and grain yield vs water use efficiency (GY_WUE) 1 m2 sub-plots were hand harvested (Table 2). Irrigation consisted into water applications by three different methods. Flood irrigation when water is pumped to the fields and is allowed to flow along the ground among the crops, drip irrigation involves dripping water onto the soil at very low rates (2l/hour) from a system of small diameter plastic pipes fitted with outlets called emitters or drippers spaced from 10 cm and furrow irrigation consist of pumping water to the stripes.

Table 3 resumes our results. In fact, variation observed for this culture seems influenced by irrigation system (IS) effect which is significantly shown on ears number and plant height, and variety (V) effect revealed on its total dry matter and ears weight. This variance can also be explained by the effect of interaction between the irrigation systems and variety (IS X V) that manifest significantly on yield parameters and water use efficiency (WUE).

The significant effect of irrigation system and variety interaction found on grain yield and for yield / water use efficiency ratio suggest that choice of genotype accomplished by irrigation system was crucial to develop a good strategy to support arid climate. Our results confirm previous study of National Institute of Field Corps which showed that khiar variety is the most adequate one for SidiBouzid region of Tunisia. In fact, large areas in the center are cultivated annually in a semi-arid climate characterized by low annual rainfall (200-400mm), erratic and generally left with a bad drought especially during development and grain filling. The differences between the potential yield of durum wheat (9.5 t/ ha) (Brink and Belay 2006) and farm yields (1 t/ ha to 6 t/ ha) are mainly attributed to poor control the technical route and especially to drought (Rajaram and Braun 2008; Latiri et al. 2010). Consequently our study enters in this item in order to develop more extensive agricultural areas. Finally, further study is needed to validate our results where their usefulness should therefore be evaluated in another company.

We thank Basma Fersi and Najib Mnafki for technical assistance in the field. We are also grateful to Ennajeh Mustafa and Hafedh Hajlaoui for useful discussion.