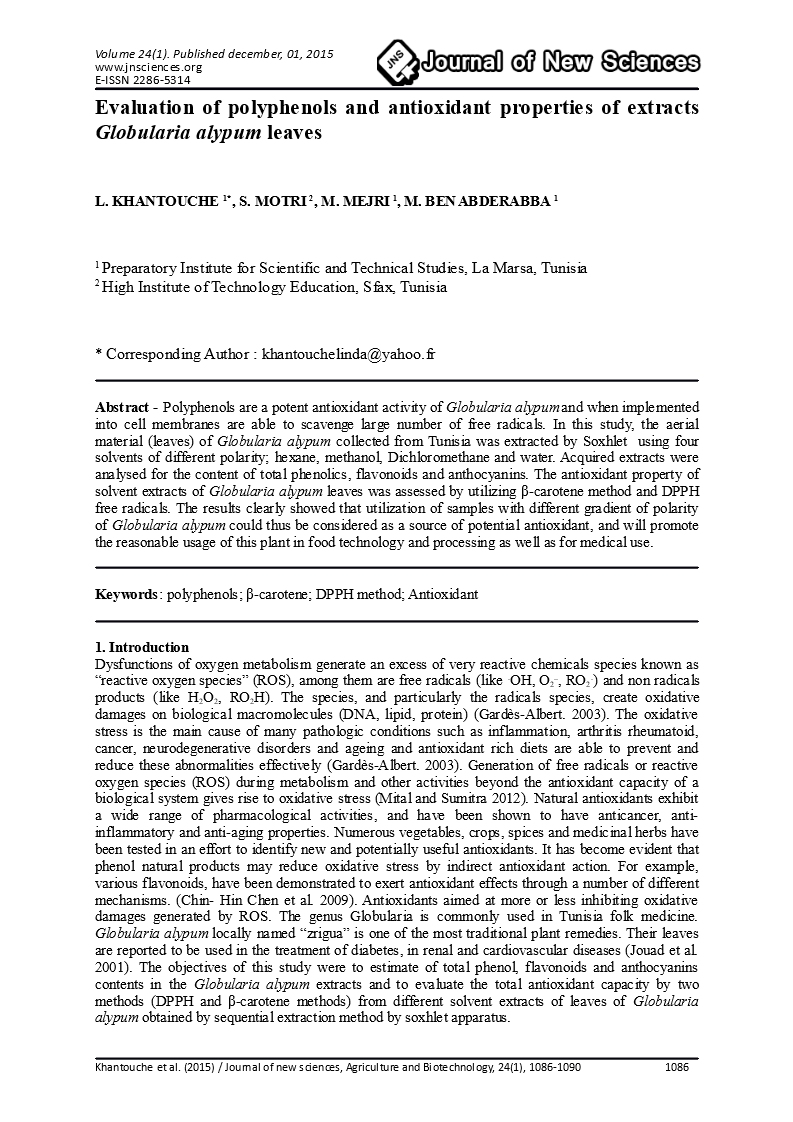 Abstract - Polyphenols are a potent antioxidant activity of Globularia alypum and when implemented into cell membranes are able to scavenge large number of free radicals. In this study, the aerial material (leaves) of Globularia alypum collected from Tunisia was extracted by Soxhlet using four solvents of different polarity; hexane, methanol, Dichloromethane and water. Acquired extracts were analysed for the content of total phenolics, flavonoids and anthocyanins. The antioxidant property of solvent extracts of Globularia alypum leaves was assessed by utilizing β-carotene method and DPPH free radicals. The results clearly showed that utilization of samples with different gradient of polarity of Globularia alypum could thus be considered as a source of potential antioxidant, and will promote the reasonable usage of this plant in food technology and processing as well as for medical use.

Dysfunctions of oxygen metabolism generate an excess of very reactive chemicals species known as “reactive oxygen species” (ROS), among them are free radicals (like .OH, O2.., RO2.) and non radicals products (like H2O2, RO2H). The species, and particularly the radicals species, create oxidative damages on biological macromolecules (DNA, lipid, protein) (Gardès-Albert. 2003). The oxidative stress is the main cause of many pathologic conditions such as inflammation, arthritis rheumatoid, cancer, neurodegenerative disorders and ageing and antioxidant rich diets are able to prevent and reduce these abnormalities effectively (Gardès-Albert. 2003). Generation of free radicals or reactive oxygen species (ROS) during metabolism and other activities beyond the antioxidant capacity of a biological system gives rise to oxidative stress (Mital and Sumitra 2012). Natural antioxidants exhibit a wide range of pharmacological activities, and have been shown to have anticancer, anti-inflammatory and anti-aging properties. Numerous vegetables, crops, spices and medicinal herbs have been tested in an effort to identify new and potentially useful antioxidants. It has become evident that phenol natural products may reduce oxidative stress by indirect antioxidant action. For example, various flavonoids, have been demonstrated to exert antioxidant effects through a number of different mechanisms. (Chin- Hin Chen et al. 2009). Antioxidants aimed at more or less inhibiting oxidative damages generated by ROS. The genus Globularia is commonly used in Tunisia folk medicine. Globularia alypum locally named “zrigua” is one of the most traditional plant remedies. Their leaves are reported to be used in the treatment of diabetes, in renal and cardiovascular diseases (Jouad et al. 2001). The objectives of this study were to estimate of total phenol, flavonoids and anthocyanins contents in the Globularia alypum extracts and to evaluate the total antioxidant capacity by two methods (DPPH and β-carotene methods) from different solvent extracts of leaves of Globularia alypum obtained by sequential extraction method by soxhlet apparatus.

The dried powder of the leaves was extracted sequentially by soxhlet apparatus, using different solvents depending upon their polarities like hexane, dichloromethane, methanol and water. Approximately, 22.5g of dried plant material was thoroughly extracted with hexane in a soxhlet apparatus. The crude extracts were subsequently filtred under vaccum and evaporated in a rotary evaporator to obtain the Soxhlet Hexane Extract (SHE). After drying at room temperature, the same dried plant material was extracted with dichloromethane as the same process to obtain the Soxhlet Dichloromethane Extract (SDE). We repeat the same process with methanol and water to obtain the Soxhlet Methanol Extract (SME) and finally the Soxhlet Water Extract (SWE). The extracts were concentrated and freed of solvent under reduce pressure, using rotary evaporator. The dried crude concentrated extracts were weighed to calculate the extractive yield and stored in a refrigerator (4°C) in air tigh bottles until used for analysis (Mital and Sumitra 2012).

The amount of total phenolics was determined with the Folin-Ciocalteu reagent using the method of Lister and Wilson (2001). This method was employed to evaluate the phenolic content of the samples. A calibration curve of gallic acid (ranging from 0.005 to 0.05 mg/ml) was prepared, and the results, determined by the regression equation of the calibration curve (y= 6.,94x – 0.67, R2= 0.99) , were expressed as mg gallic acid equivalents per gram dry weight of raw material (mg GAE/ g dry weight). In this methods, 100 µl of sample (diluted to obtain absorbance in the range of the prepared calibration curve) were dissolved in 500 µl (1/10 dilution) of the Folin-Ciocalteu reagent and 1 ml of distilled water. The solutions were mixed and incubated at room temperature. After 1 min, 1.5 ml of 20% sodium carbonate (Na2CO3) solution were added. The final mixture was shaken thoroughly and then incubated for 2 h in the dark at room temperature. The absorbance of all samples was measured at 760 nm using a HACH UV-Vis spectrophotometer (El Akrem et al 2007).

The amount of flavonoid content in different solvent extracts of leaves was determination by aluminium chloride colorimetric method of Zeghad and Merghem (2013). The reaction mixture 2 ml consisted of 1 ml of sample (1 mg/ml), 0.5 ml of aluminuim chloride (1.2%) and 0.5 ml of potassium acetate (120 mM) was incubated at room temperature for 30 min. The absorbance of all samples was measured at 415 nm. Quercetin was used as positive control. The flavonoid content is expressed in terms of quercetin equivalent (mg/g QE of dry extract for flavonoids) of extracted compound. The assay was carried out in triplicate and the mean values with± SEM are presented.

The amount of anthocyanins contents was determined using the method of Pamino-Duran et al (2001). The mixture, composed with 1 ml of samples and 9 ml of HCl, was incubated at room temperature for 5 min. the absorbance of samples was measured at 520 nm using a HACH UV-Vis spectrophotometer. The anthocyanins content is expressed in terms of mg E Cy/g dried mass (mg Equivalent of Cyanine per gram of dried mass).

The antioxidant activity of plant extract was evaluated according to Pratt(1980).The assay reagent was prepared by mixing 0.5 mg of β-carotene with 1 ml of chloroform, 25µl of linoleic acid and 200 mg of Tween 40 (polyoxethylenesorbitanmonopalmitate). Chloroform was removed at 50 °C, under vaccum, using a rotary evaporator (Heidolph, Germany). The resulting mixture was immediately diluted with 100 ml of oxygenated distilled water. Aliquots (2500 µl) of this emulsion were transferred into different test tubes containing 350 µl of test samples. The tubes were shaken and incubated at 50°C in water bath. BHT was used for comparative purposes. Absorbance of all samples at 490 nm were taken at zero time (t= 0), measurement of absorbance was continued, until the color of the β carotene disappeared in the control reaction (t= 1h), at 5 min intervals. A mixture prepared as above, without β-carotene, served as blank.

1 ml of corresponds solvent was added to the dry extract; the resulting extract has the initial concentration. These solutions were diluted to 1/10, 1/100 and 1/1000.

The antioxidant power of these plant extracts was examined on the basis of the scavenging effect compound, and the reaction is monitored by a spectrometer (Guesmi et al 2014). Each sample (50 µl) was added to methanolic solution of DPPH (2 ml of 6.10-5 M). The antioxidant tests were based on the measurement of the loss of DPPH color at 515 nm. BHT was used for comparative purposes. Free radical scavenging capacity was calculated by the following equation:

Results are presented as mean values ± standard deviation. Statistical analyses, using excel, between experimental results are based on the Student’s t test.

Factors like type of cultivar, climate condition and soil composition could explain this variability (Guesmi et al 2014). Researches of Nadia Zeghad et al. (2013)showed a content of flavonoid in the extract of Thymus vulgaris in terms of Quercetin equivalent about 8.56±0.001 mg/g QE of dry material. Results reported by Hayouni(2009) showed a content of phenolic in the extract of Quercus coccifera about 45 mg GAE/g of dry material. Furthermore, these results showed an important polyphenols of Globularia alypum leaves content than other plants.

In the case of β-carotene test results, the antioxidant power decreased in the order DCM> Hexane>Methanol>Water. As shown in Figure 1, extracts of Globularia alypum exhibited a higher antioxidant activity than BHT (Butylated hydroxytoluene). The decreasing of absorbance of β-carotene with extract is measured with time. The extracts avoid the bleaching of β-carotene with comparison with the control. The absorbance of the samples demonstrates a decreasing after 50 min (Figure 1). This result is confirmed with the literature of Dastmalchi et al. (2007) witch demonstrated that all extracts of Dracocephalum moldavica were capable of inhibiting of β carotene by scavenging linoleate-derived free radicals.

The DPPH radical had been used widely in the model system to investigate the scavenging activities of several natural compounds such as phenol compounds. DPPH radical was scavenged by antioxidants through the donation of hydrogen, forming the reduced DPPH-H.. The color changed from purple to yellow after reduction, which can be quantified by its decrease of absorbance at wavelength 515 nm. The results obtained are given in table 2 and are expressed as the percentage of scavenging activity of DPPH. The extraction of aerial parts of Globularia alypum with various solvents, and the reduction of DPPH was used to evaluate the antioxidant activity of the obtained extracts. Our experiment results demonstrate that the methanol extract possesses the higher antioxidant activity than other extracts. Similar results were founded by Nour-Eddine Es-Safi et al (2007). The result of the present study suggests that Globularia alypum can be used as a source of antioxidants for pharmacological preparations (Nour-Eddine Es-Safi et al. 2007).

As observed, extracts with higher antioxidant capacity also had higher phenols contents. Polyphenols were reported to have an important role in stabilizing lipid peroxidation and are associated with a wide range of biological activities including antioxidant properties (Khlifi et al.2005). The Globularia alypum leaves rich in phenolics are increasingly being used in the food industry because they retard oxidative degradation of lipids and improve the quality and nutritional value of food. The implication of the polyphenolic compounds in the antioxidant activity of G. alypum is supported by previous results obtained with other Globularia species (Khlifi et al. 2005). The antioxidant capacity of the samples in the DPPH assay is as follows, in decreasing order: Methanol>water>hexane>DCM.

It is notable that the extracts from Globularia alypum were more efficient as antioxidant capacity than BHT with β-Carotène bleaching test.

The present study showed that Globularia alypum accessions can be considered as good sources of natural antioxidants for side dishes, medicinal and commercial uses.

Guesmi F, Ben farhat M, Mejri M, and Landoulsi A (2014) In vitro assessment of antioxidant and antimicrobial activities of methanol extracts and essential oil of Thymus hirtus sp. algeriensis.Lipids in Health and Disease 13: 114.