Abstract – Having studied the life cycle and the dynamic population of Mayetiola destructor Say (1817) et Mayetiola hordei Kieffer (1909) (Diptera; Cecidomyiidae) using two sampling methods in barley fields. Results showed that M. destructor is more important than M. hordei in the region of Mograne. Populations of the two Hessian flies appear extensively in both experimental fields particularly the adults. During this campaign, 3 adults ‘generations were able to emerge in both plots with a dominance of the females which was absolute for certain periods by causing many damages. Damages evaluation showed a percentage of attacks that reached 100% during certain periods. On the other hand, a phenomenon of parasitism was observed, and which achieved in certain cases 62% for the first experimental field and 100% for the second one which causes the Hessian fly populations’ decrease. 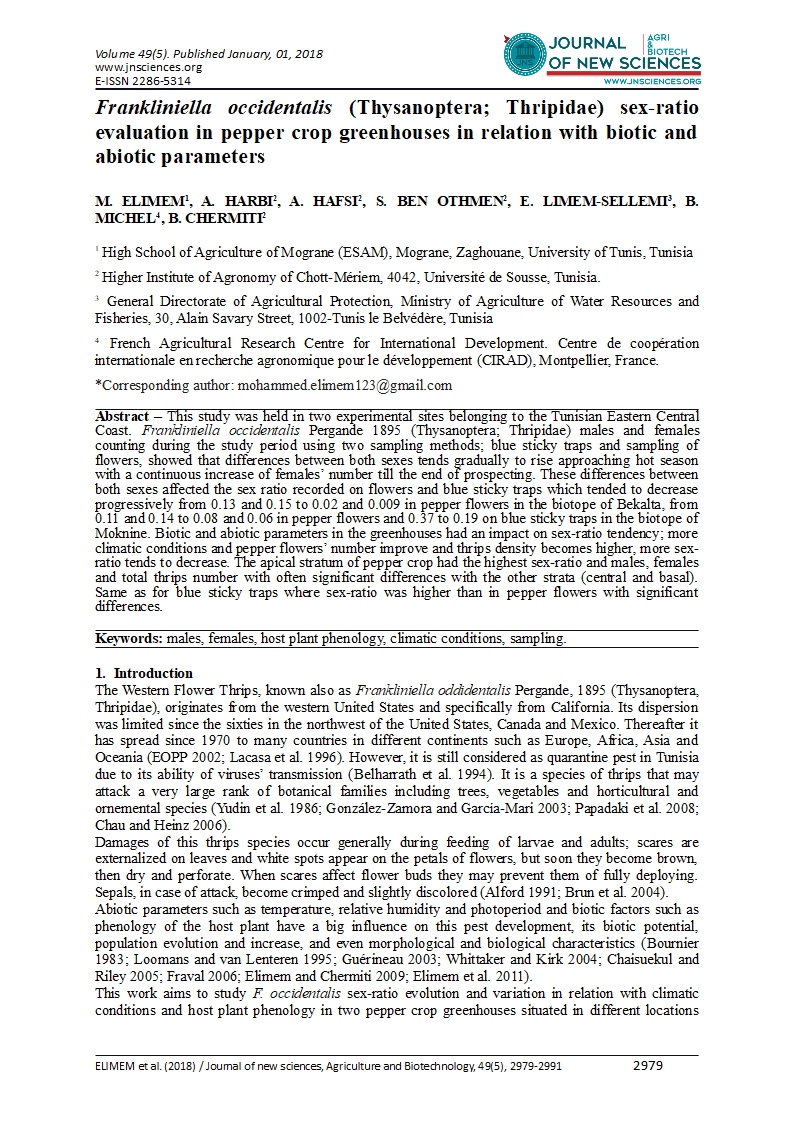 Abstract – This study was held in two experimental sites belonging to the Tunisian Eastern Central Coast. Frankliniella occidentalis Pergande 1895 (Thysanoptera; Thripidae) males and females counting during the study period using two sampling methods; blue sticky traps and sampling of flowers, showed that differences between both sexes tends gradually to rise approaching hot season with a continuous increase of females’ number till the end of prospecting. These differences between both sexes affected the sex ratio recorded on flowers and blue sticky traps which tended to decrease progressively from 0.13 and 0.15 to 0.02 and 0.009 in pepper flowers in the biotope of Bekalta, from 0.11 and 0.14 to 0.08 and 0.06 in pepper flowers and 0.37 to 0.19 on blue sticky traps in the biotope of Moknine. Biotic and abiotic parameters in the greenhouses had an impact on sex-ratio tendency; more climatic conditions and pepper flowers’ number improve and thrips density becomes higher, more sex-ratio tends to decrease. The apical stratum of pepper crop had the highest sex-ratio and males, females and total thrips number with often significant differences with the other strata (central and basal). Same as for blue sticky traps where sex-ratio was higher than in pepper flowers with significant differences. 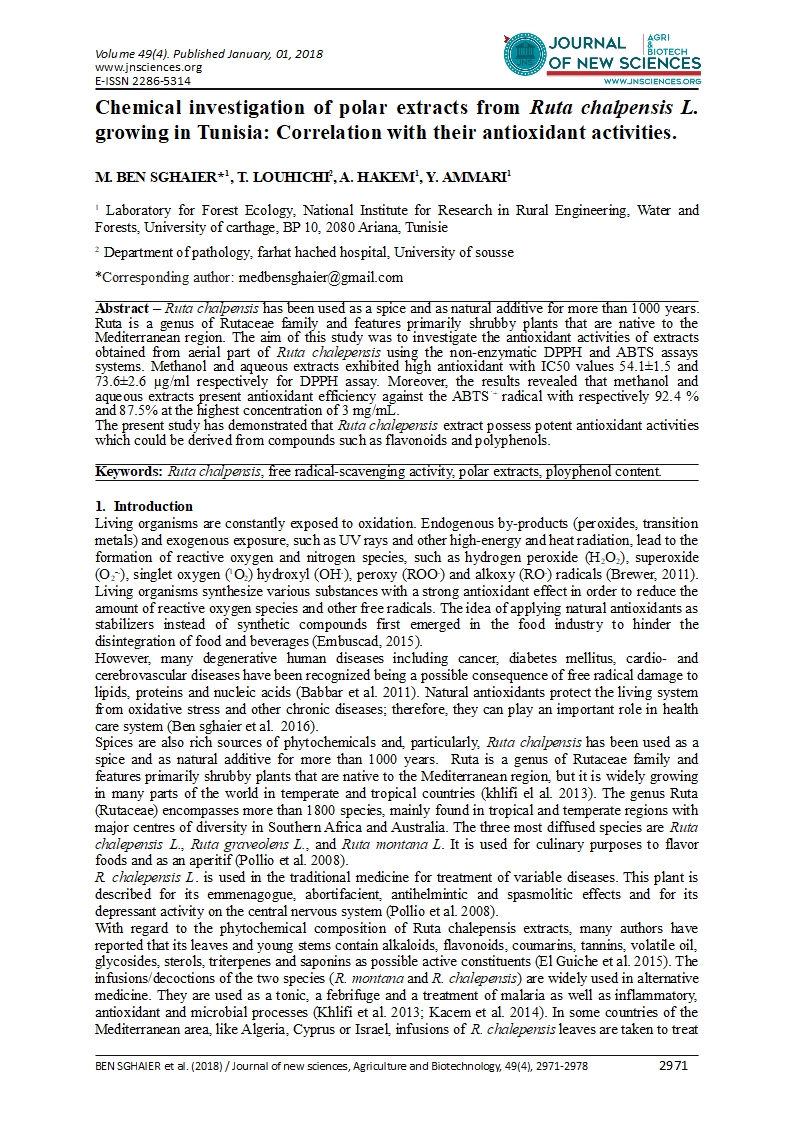 Abstract – Ruta chalpensis has been used as a spice and as natural additive for more than 1000 years. Ruta is a genus of Rutaceae family and features primarily shrubby plants that are native to the Mediterranean region. The aim of this study was to investigate the antioxidant activities of extracts obtained from aerial part of Ruta chalepensis using the non-enzymatic DPPH and ABTS assays systems. Methanol and aqueous extracts exhibited high antioxidant with IC50 values 54.1±1.5 and 73.6±2.6 µg/ml respectively for DPPH assay. Moreover, the results revealed that methanol and aqueous extracts present antioxidant efficiency against the ABTS˙+ radical with respectively 92.4 % and 87.5% at the highest concentration of 3 mg/mL. The present study has demonstrated that Ruta chalepensis extract possess potent antioxidant activities which could be derived from compounds such as flavonoids and polyphenols. 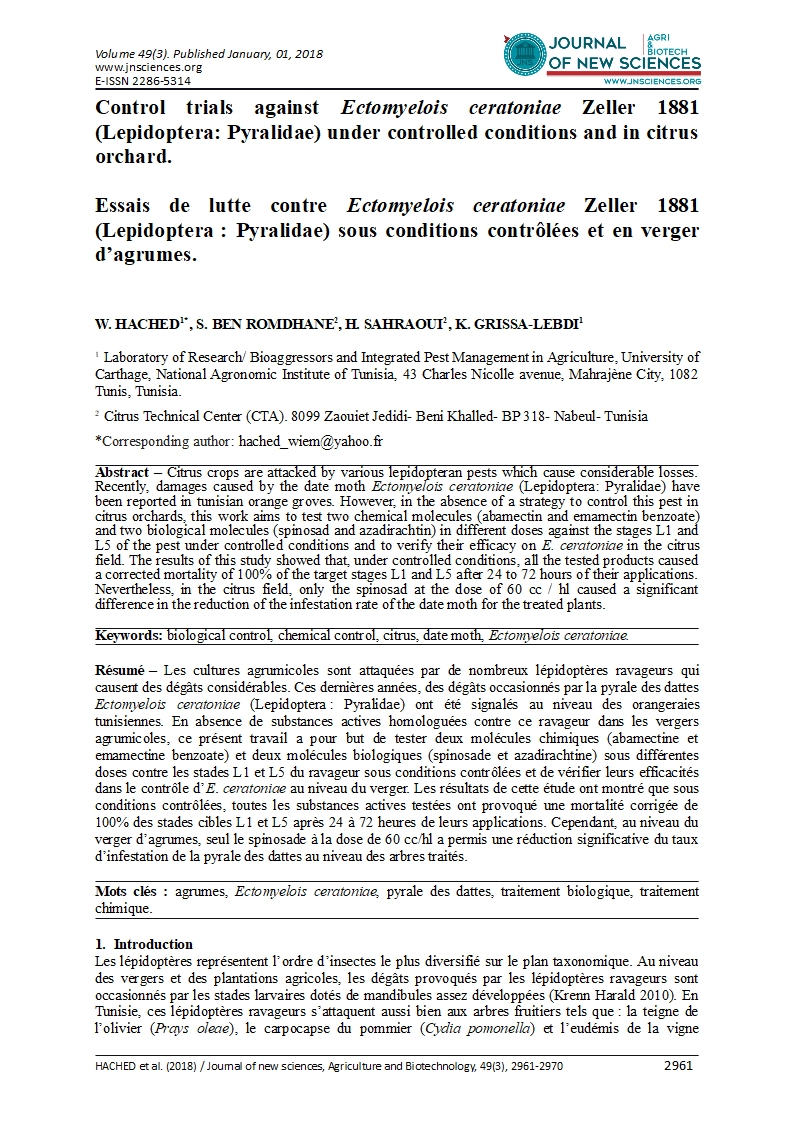 Abstract – Citrus crops are attacked by various lepidopteran pests which cause considerable losses. Recently, damages caused by the date moth Ectomyelois ceratoniae (Lepidoptera: Pyralidae) have been reported in tunisian orange groves. However, in the absence of a strategy to control this pest in citrus orchards, this work aims to test two chemical molecules (abamectin and emamectin benzoate) and two biological molecules (spinosad and azadirachtin) in different doses against the stages L1 and L5 of the pest under controlled conditions and to verify their efficacy on E. ceratoniae in the citrus field. The results of this study showed that, under controlled conditions, all the tested products caused a corrected mortality of 100% of the target stages L1 and L5 after 24 to 72 hours of their applications. Nevertheless, in the citrus field, only the spinosad at the dose of 60 cc / hl caused a significant difference in the reduction of the infestation rate of the date moth for the treated plants. 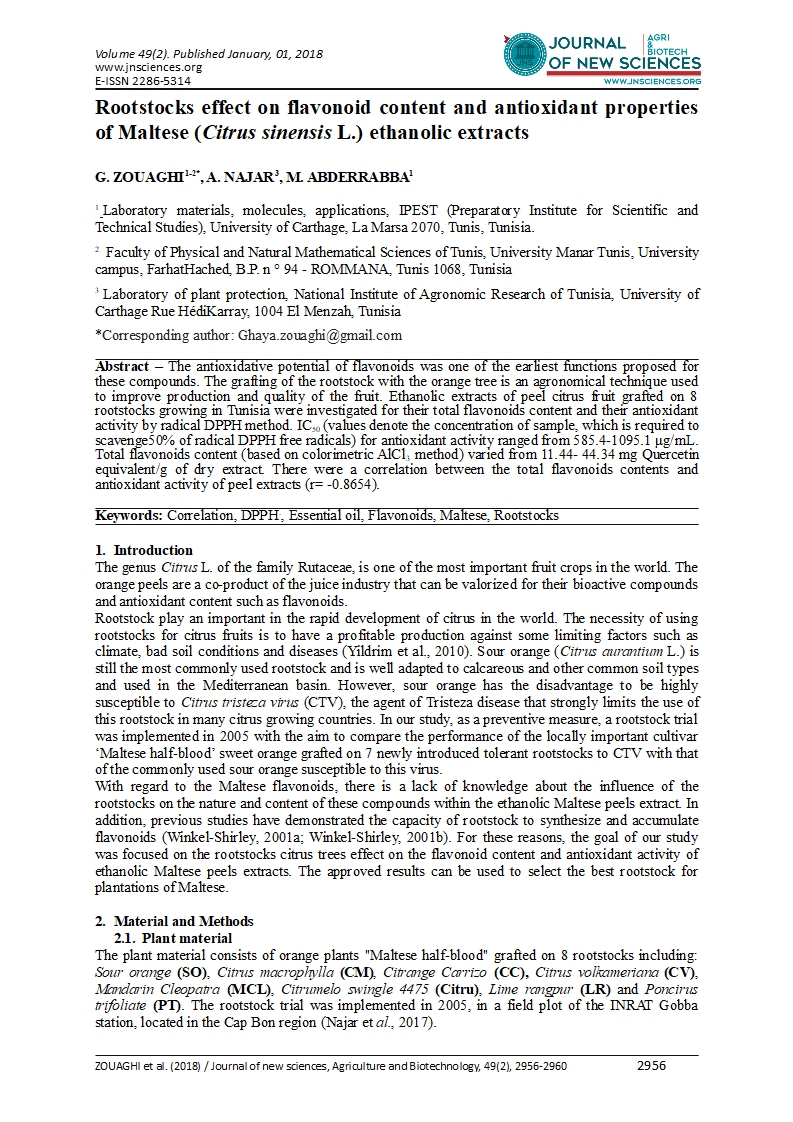 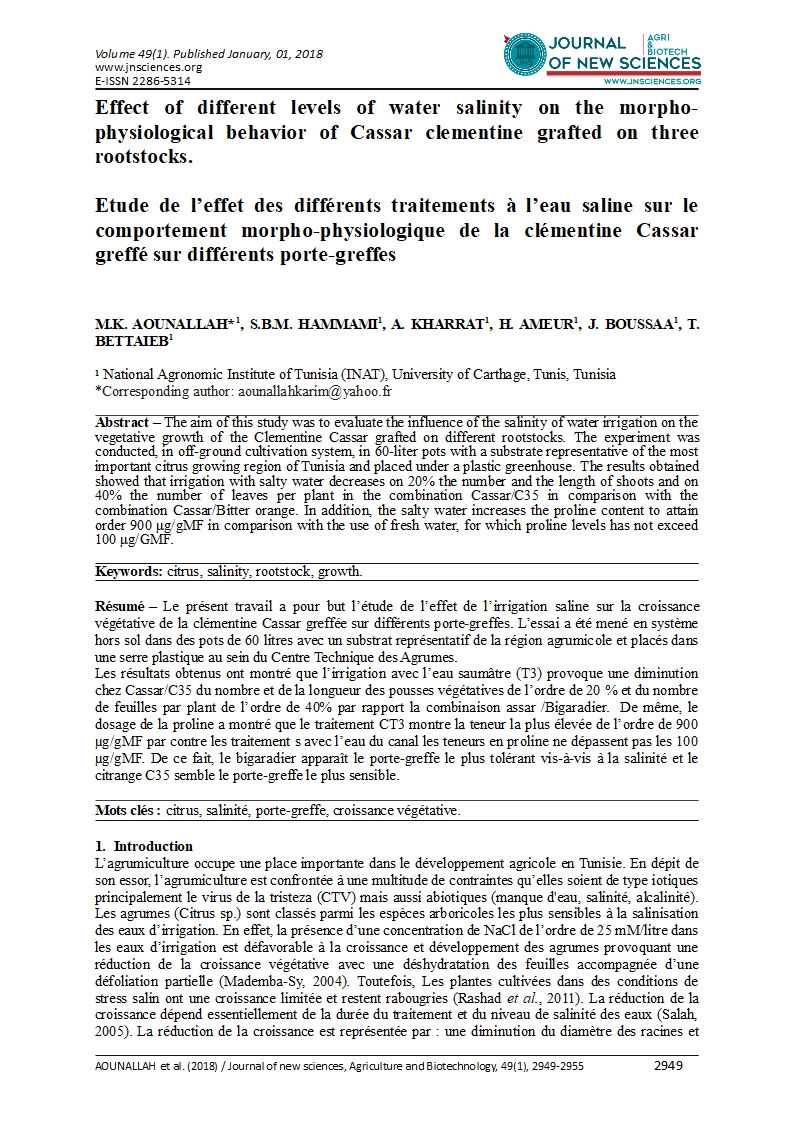 Abstract – The aim of this study was to evaluate the influence of the salinity of water irrigation on the vegetative growth of the Clementine Cassar grafted on different rootstocks. The experiment was conducted, in off-ground cultivation system, in 60-liter pots with a substrate representative of the most important citrus growing region of Tunisia and placed under a plastic greenhouse. The results obtained showed that irrigation with salty water decreases on 20% the number and the length of shoots and on 40% the number of leaves per plant in the combination Cassar/C35 in comparison with the combination Cassar/Bitter orange. In addition, the salty water increases the proline content to attain order 900 μg/gMF in comparison with the use of fresh water, for which proline levels has not exceed 100 μg/GMF.