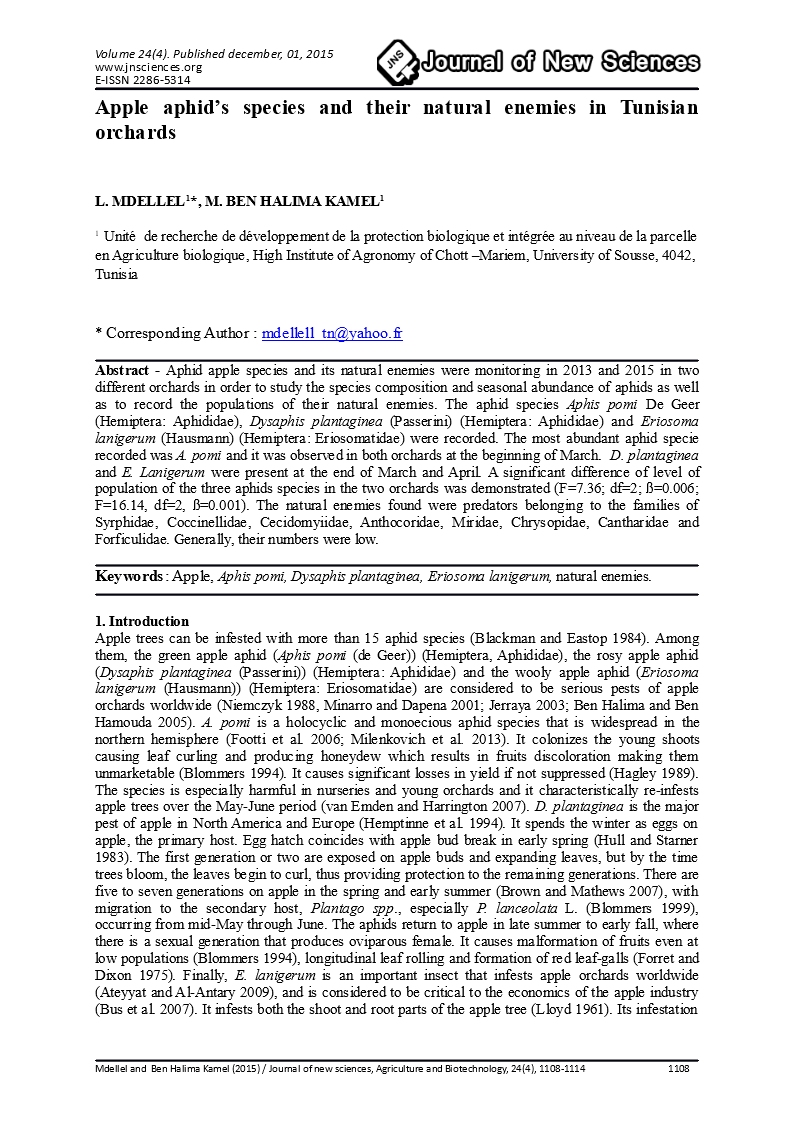 Abstract - Aphid apple species and its natural enemies were monitoring in 2013 and 2015 in two different orchards in order to study the species composition and seasonal abundance of aphids as well as to record the populations of their natural enemies. The aphid species Aphis pomi De Geer (Hemiptera: Aphididae), Dysaphis plantaginea (Passerini) (Hemiptera: Aphididae) and Eriosoma lanigerum (Hausmann) (Hemiptera: Eriosomatidae) were recorded. The most abundant aphid specie recorded was A. pomi and it was observed in both orchards at the beginning of March. D. plantaginea and E. Lanigerum were present at the end of March and April. A significant difference of level of population of the three aphids species in the two orchards was demonstrated (F=7.36; df=2; ß=0.006; F=16.14, df=2, ß=0.001). The natural enemies found were predators belonging to the families of Syrphidae, Coccinellidae, Cecidomyiidae, Anthocoridae, Miridae, Chrysopidae, Cantharidae and Forficulidae. Generally, their numbers were low.

Apple trees can be infested with more than 15 aphid species (Blackman and Eastop 1984). Among them, the green apple aphid (Aphis pomi (de Geer)) (Hemiptera, Aphididae), the rosy apple aphid (Dysaphis plantaginea (Passerini)) (Hemiptera: Aphididae) and the wooly apple aphid (Eriosoma lanigerum (Hausmann)) (Hemiptera: Eriosomatidae) are considered to be serious pests of apple orchards worldwide (Niemczyk 1988, Minarro and Dapena 2001; Jerraya 2003; Ben Halima and Ben Hamouda 2005). A. pomi is a holocyclic and monoecious aphid species that is widespread in the northern hemisphere (Footti et al. 2006; Milenkovich et al. 2013). It colonizes the young shoots causing leaf curling and producing honeydew which results in fruits discoloration making them unmarketable (Blommers 1994). It causes significant losses in yield if not suppressed (Hagley 1989). The species is especially harmful in nurseries and young orchards and it characteristically re-infests apple trees over the May-June period (van Emden and Harrington 2007). D. plantaginea is the major pest of apple in North America and Europe (Hemptinne et al. 1994). It spends the winter as eggs on apple, the primary host. Egg hatch coincides with apple bud break in early spring (Hull and Starner 1983). The first generation or two are exposed on apple buds and expanding leaves, but by the time trees bloom, the leaves begin to curl, thus providing protection to the remaining generations. There are five to seven generations on apple in the spring and early summer (Brown and Mathews 2007), with migration to the secondary host, Plantago spp., especially P. lanceolata L. (Blommers 1999), occurring from mid-May through June. The aphids return to apple in late summer to early fall, where there is a sexual generation that produces oviparous female. It causes malformation of fruits even at low populations (Blommers 1994), longitudinal leaf rolling and formation of red leaf-galls (Forret and Dixon 1975). Finally, E. lanigerum is an important insect that infests apple orchards worldwide (Ateyyat and Al-Antary 2009), and is considered to be critical to the economics of the apple industry (Bus et al. 2007). It infests both the shoot and root parts of the apple tree (Lloyd 1961). Its infestation reduces vegetative growth and hence production capacity (Brown and Schmitt 1990; Brown et al. 1995). The protection of the orchards is currently only assured by one preventive and intensive chemical fight. However, the misuse of the pesticides by the farmers in particular with the choice of the medicinal agro products, the active matters, the amounts applied, the frequency of the treatments, the equipment of treatment etc, caused diseases on this culture, the destruction of auxiliary fauna as well as the pollution of the environment. Thus, alternative strategies are needed. The growing of resistant cultivars probably provides the best long term solution. Biological control by natural enemies, either by weed strips to enhance the number of aphidophagous predators (Wyss 1995; Wyss et al. 1995), or augmentative releases of indigenous natural enemies (Wyss et al. 1999), may be other powerful tools. However, despite the traditional growing of local apple trees, the community of apple aphids and their natural’s enemies has not been still studied in Tunisia. Studies on species composition and abundance of aphids and their natural enemies are required for the development of an integrated management program in apple orchards. Under this concept the aim of the present work was to study the species composition and seasonal abundance of aphids as well as to record the populations of their natural enemies.

In order to register the presence of aphids, all the trees were assessed weekly during the spring aphid occurrence by visuals controls. Therefore, for aphids’ species identification and abundance and in order to minimize the losses of the farmer, 4 rows of 20 trees in each orchard were selected for sampling. The temporal abundance of aphids was studied weekly by taking samples from 7 selected trees using random number. The sampling unit was the upper part of the growing shoot, bearing more than six leaves offers an adequate estimation of the population level of aphids on the tree, since according to Hull and Grimm (1983) 90 or more than 90% of the total aphid population collected from the top on the lower part of the tree, respectively, develops on those leaves. From each tree, 8 shoots (2 from each side: north, south, east, west) were collected. Samples were collected weekly and each shoot was put separately in a polyethylene bug and brought to the laboratory for species identification and for counting. Arthropod predators were also assessed weekly during the spring aphid occurrence by visual controls. Some larvae were reared on aphids’ colonies in laboratory in order to determine the species. Mummies founded were also brought to laboratory and put in Petri Dish until parasitoid emergence and determinate species.

For the laboratory assays, the experimental results were statistically analyzed using SPSS 17 program, a one way analysis of variance and a S-N-K test, with statistical significance set at ß=0.05. The level of population of each aphid in both orchards was compared.

Aphid’s surveys show the presence of three species on apple trees in the two studied orchards. The most abundant aphid specie recorded was Aphis pomi De Geer (Hemiptera: Aphididae) (Figure 1 A and B). It was observed in both orchards at the beginning of March. During period surveys, a high population of A. pomi was registered in the second orchard (1585.54±1382.18) in comparison to that in the first orchard (201.17±24.03). Dysaphis plantaginea Passerini (Figure 1 C and D), the second abundant aphid was observed at mid March in Sousse (second orchard), therefore, at mid April in Ben Arous (First orchard). A population of D. plantaginea in the first orchard is higher than that in the second orchard. The level of population was 857.33±234 and 33.41±24.20 in the first and the second orchard respectively. The third identified aphid specie was Eriosoma lanigerum Hausmann (Figure 1 E and F). It was observed at mid May on trunks of apple trees in the first orchard. Therefore, it was seen in shoots and branches at the end of March and disappears in two week in second orchard. A comparison of level of population of the three aphids species in the two orchards demonstrate a significant difference in both orchards (F=7.36; df=2; ß=0.006; F=16.14, df=2, ß=0.001) (Figure 2).