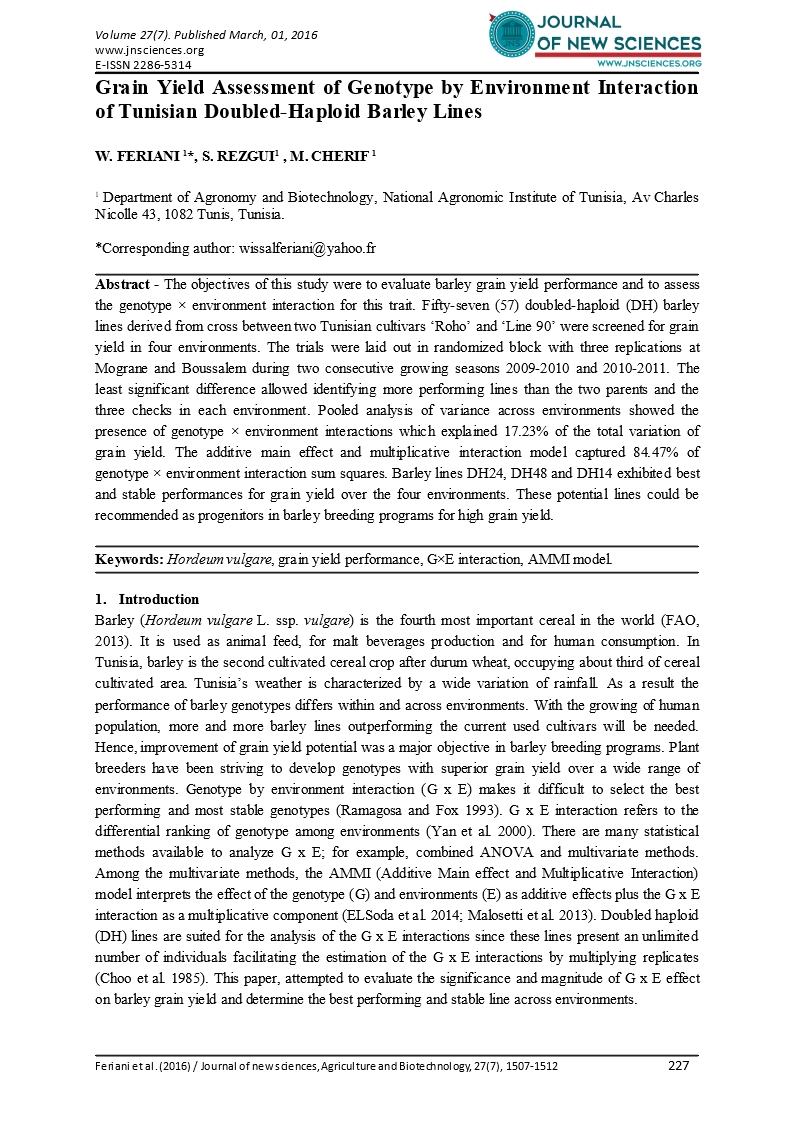 Barley (Hordeum vulgare L. ssp. vulgare) is the fourth most important cereal in the world (FAO, 2013). It is used as animal feed, for malt beverages production and for human consumption. In Tunisia, barley is the second cultivated cereal crop after durum wheat, occupying about third of cereal cultivated area. Tunisia’s weather is characterized by a wide variation of rainfall. As a result the performance of barley genotypes differs within and across environments. With the growing of human population, more and more barley lines outperforming the current used cultivars will be needed. Hence, improvement of grain yield potential was a major objective in barley breeding programs. Plant breeders have been striving to develop genotypes with superior grain yield over a wide range of environments. Genotype by environment interaction (G x E) makes it difficult to select the best performing and most stable genotypes (Ramagosa and Fox 1993). G x E interaction refers to the differential ranking of genotype among environments (Yan et al. 2000). There are many statistical methods available to analyze G x E; for example, combined ANOVA and multivariate methods. Among the multivariate methods, the AMMI (Additive Main effect and Multiplicative Interaction) model interprets the effect of the genotype (G) and environments (E) as additive effects plus the G x E interaction as a multiplicative component (ELSoda et al. 2014; Malosetti et al. 2013). Doubled haploid (DH) lines are suited for the analysis of the G x E interactions since these lines present an unlimited number of individuals facilitating the estimation of the G x E interactions by multiplying replicates (Choo et al. 1985). This paper, attempted to evaluate the significance and magnitude of G x E effect on barley grain yield and determine the best performing and stable line across environments.

Plant material used in this study consisted of fifty-seven DH barley lines obtained at Florimond Desprez (France), using anther culture and the Hordeum bulbosum method (Pickering and Devaux, 2005). These DH lines were developed from F1 plants of the cross between the Tunisian cultivar 'Roho' and the local line '90' which was carried out at INAT (Institut National Agronomique de Tunisie). Three barley genotypes ‘Martin’, ‘Manel’ and ‘Rihane’ were added to the present population as checks.

The trials were laid down in a randomized block design with three replications. Barley lines were sown on 12 November 2009 and on 30 November 2010 at Mograne. The sowing dates at Boussalem site were on 20 November 2009 and 23 November 2010. Each genotype was sown in two rows of two meters length with 25 cm inter-rows spacing and 5cm between plants spacing. Grain yield (GY) was assessed as the total grain weight of two rows measured after harvest, and expressed in grams per meter square (g/m2).

Grain yield (GY) data was first analyzed using PROC ANOVA of SAS (SAS Institute, 1988) separately for each environment to assess variation within barley genotypes according to the following model:

Then, lines were separated for GY using the least significant difference (LSD) test at a probability level of 5% to generate superior genotypes per environment.

PROC Mixed with the option of PDMix800 of SAS (SAS Institute, 1988) was implemented to compare means of barley genotypes across environments.

The AMMI model was performed using the GenStat (12.1) software to evaluate the significance and magnitude of G x E effect on grain yield according to the following model:

A wide range of variations was found among the barley lines for grain yield in each environment (Table 1). Summary statistics of the phenotypic performance of barley population for grain yield assessed in Mograne and Boussalem during 2009-2010 and 2010-2011 are represented in Table 2.

The fact that each site identifies a specific set of performing barley genotypes is a powerful
indication of the presence of the G × E interaction. Table 2 showed that the rank of genotypes changes across the four environments. The combined analysis of variance demonstrated a highly significant difference for the environment effect (E), the genotype main effect (G) and genotype × environment interaction effect (G × E) (Table 3). Environmental effect was the most prominent contributing to the source of variation for 31.44% of the treatment sum of squares, while the genotype and G x E interaction effects explained 19.03% and 17.23% of the total variation, respectively. The large sum of squares for the environment effect indicated that environments were diverse causing variation in plant grain yields. This result is similar to that reported by Kadi et al. (2010) and Samonte et al. (2005) noting that the largest proportion of total variation in multi-environment trials is attributed to environments, whereas genotype and G × E interaction sources of variation are relatively smaller. Significant G × E interaction effects indicated that substantial differences in genotypic response across environments existed, suggesting to conduct multiple-environment trials to identify superior cultivars for the target region. Previous studies have also reported significant G × E interaction effect for grain yield in barley populations (Von Korff et al. 2008; Schmalenbach et al. 2009).

The results indicated that there were desirable genotypes in the barley population in terms of high mean yields over the four tested environments. Lines DH24, DH38 and DH48 were the most productive genotypes. Grain yield performance was highly influenced by G × E interaction effects. The presence of the genotype x environment interaction indicated a change of genotypes rank across environments. The AMMI model effectively explained 84.72% of G × E interaction. Moreover, results identified DH24, DH48, DH14, DH38, DH28, DH44 and DH58 as the seven best performing and stable barley lines. Therefore, it is reasonable to recommend these varieties as progenitors in barley breeding programs for high grain yield.

We thank Dr. Pierre Devaux and his team from seed Coop. ‘Florimond Desprez Veuve and Fils’ for their contribution in this investigation by producing doubled haploid lines.