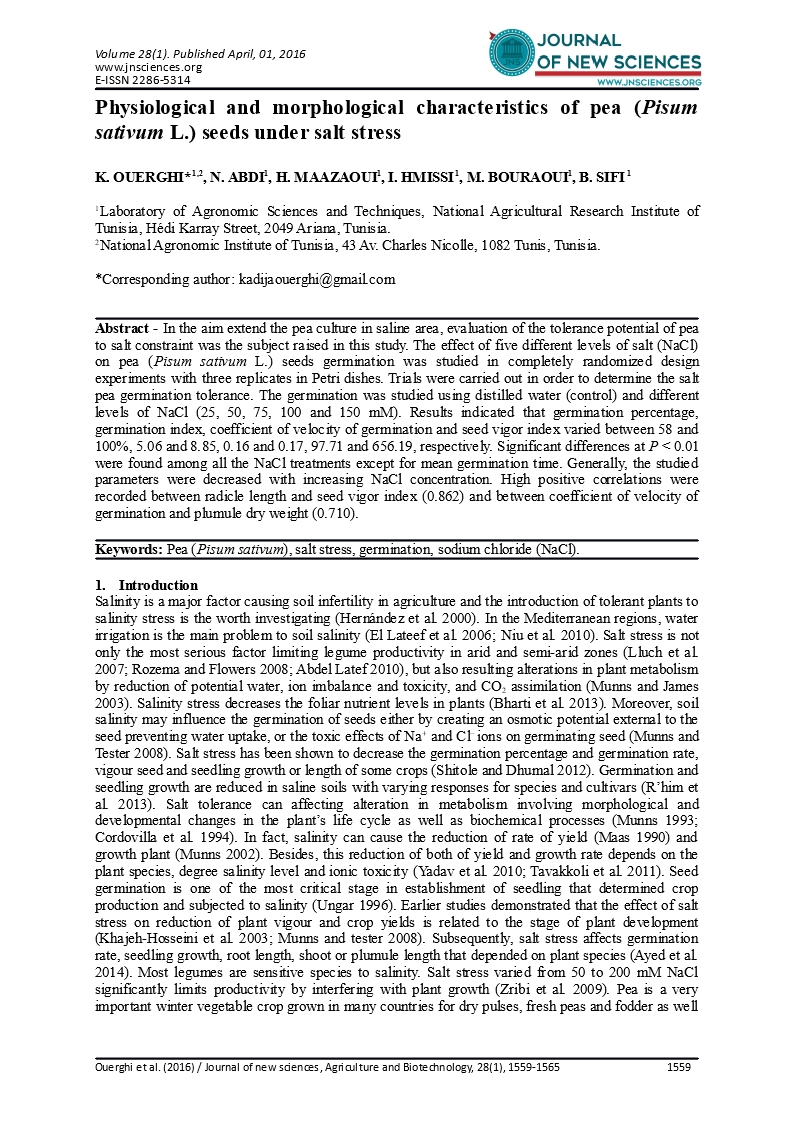 Abstract - In the aim extend the pea culture in saline area, evaluation of the tolerance potential of pea to salt constraint was the subject raised in this study. The effect of five different levels of salt (NaCl) on pea (Pisum sativum L.) seeds germination was studied in completely randomized design experiments with three replicates in Petri dishes. Trials were carried out in order to determine the salt pea germination tolerance. The germination was studied using distilled water (control) and different levels of NaCl (25, 50, 75, 100 and 150 mM). Results indicated that germination percentage, germination index, coefficient of velocity of germination and seed vigor index varied between 58 and 100%, 5.06 and 8.85, 0.16 and 0.17, 97.71 and 656.19, respectively. Significant differences at P <0.01 were found among all the NaCl treatments except for mean germination time. Generally, the studied parameters were decreased with increasing NaCl concentration. High positive correlations were recorded between radicle length and seed vigor index (0.862) and between coefficient of velocity of germination and plumule dry weight (0.710).

Salinity is a major factor causing soil infertility in agriculture and the introduction of tolerant plants to salinity stress is the worth investigating (Hernández et al. 2000). In the Mediterranean regions, water irrigation is the main problem to soil salinity (El Lateef et al. 2006; Niu et al. 2010). Salt stress is not only the most serious factor limiting legume productivity in arid and semi-arid zones (Lluch et al. 2007; Rozema and Flowers 2008; Abdel Latef 2010), but also resulting alterations in plant metabolism by reduction of potential water, ion imbalance and toxicity, and CO2 assimilation (Munns and James 2003). Salinity stress decreases the foliar nutrient levels in plants (Bharti et al. 2013). Moreover, soil salinity may influence the germination of seeds either by creating an osmotic potential external to the seed preventing water uptake, or the toxic effects of Na+ and Cl− ions on germinating seed (Munns and Tester 2008). Salt stress has been shown to decrease the germination percentage and germination rate, vigour seed and seedling growth or length of some crops (Shitole and Dhumal 2012). Germination and seedling growth are reduced in saline soils with varying responses for species and cultivars (R’him et al. 2013). Salt tolerance can affecting alteration in metabolism involving morphological and developmental changes in the plant’s life cycle as well as biochemical processes (Munns 1993; Cordovilla et al. 1994). In fact, salinity can cause the reduction of rate of yield (Maas 1990) and growth plant (Munns 2002). Besides, this reduction of both of yield and growth rate depends on the plant species, degree salinity level and ionic toxicity (Yadav et al. 2010; Tavakkoli et al. 2011). Seed germination is one of the most critical stage in establishment of seedling that determined crop production and subjected to salinity (Ungar 1996). Earlier studies demonstrated that the effect of salt stress on reduction of plant vigour and crop yields is related to the stage of plant development (Khajeh-Hosseini et al. 2003; Munns and tester 2008). Subsequently, salt stress affects germination rate, seedling growth, root length, shoot or plumule length that depended on plant species (Ayed et al. 2014). Most legumes are sensitive species to salinity. Salt stress varied from 50 to 200 mM NaCl significantly limits productivity by interfering with plant growth (Zribi et al. 2009). Pea is a very important winter vegetable crop grown in many countries for dry pulses, fresh peas and fodder as well as for to its richness in proteins and carbohydrates (Hussein et al. 2006). Many studies demonstrated that pea is the most sensitive species to salinity than soybean and faba bean (50 and 100 mM NaCl) (Nenova 2008). Approximately 50% yield reduction in pea crop was found at 100 mM NaCl (Subbarao and Johansen 1994) and subsequently, reduction of productivity following high level of salinity (Najafi et al. 2007). Nevertheless, the tolerance of pea to long-term salt stress (70 mM NaCl) is associated with induction of antioxidant defences (Hernández et al. 2000). Moreover, under 80 mM NaCl, salinity stress significantly enhanced potassium deficiency and sodium accumulation in the leaves of pea (Pandolfi et al. 2012). The tolerance to salinity in pea plants was assessed by reducing stress ethylene levels under 200 mM NaCl (Barnawal et al. 2014). Cokkizgin and Colkesen (2012) reported that increasing NaCl osmotic potential decrease generally all parameters applied on seed germination of pea such as the lowest of seed vigor index, seed length, radicle length and germination percentage. The present study aimed to investigate the effects of salt stress on the germination seed of pea under controlled conditions.

This research was carried out under controlled conditions at the Agronomic Sciences and Techniques Laboratory of the National Agricultural Research Institute of Tunisia. The pea Lincoln variety was used as plant material. It is an important edible leguminous seed crop for human nutrition, ideal for fresh use and suitable for open field production in Tunisia and the thousand kernel weight is 225 g.

Pea seeds were sterilized with 5% sodium hypochlorite (NaOCl) and washed minutely with mono distilled water (2.3µS/cm) (Sauer and Burroughs 1986). The seeds were then germinated in 120 mm sterilized Petri dishes. All Petri dishes were sterilized at 120°C for 20 minutes in autoclave. Salt (NaCl) solutions were prepared as follows: 0 (control), 25, 50, 75, 100 and 150 mM NaCl. The experimental design adopted was completely randomized. Ten seeds were supplied in each Petri dish on double layer what man paper with three replicates. Subsequently, Petri dishes were placed in germination cabinet at a temperature of 20°C and 50% relative humidity (RH) for 8 days (ISTA, 2011). During this period, 5 ml of appropriate solution was applied to each Petri dish every day (Cokkizgin and Colkesen 2012).

According to the seedling evaluation procedure in the Handbook of Association of Official Seed Analysts, the germinated seeds were counted daily. The number of germinated seeds was recorded every 24 h (AOSA, 1993). The germination percentage was determined as described by Cokkizgin and Colkesen (2012) as follows:

Seed vigor index (SVI) was determined by multiplying seedling length (cm) by germination percentage (GP) according to Baki and Anderson (1973).

Coefficient of velocity of germination (CVG) was calculated as described by Maguire (1962) as:

Where G is the number of germinated seeds and n is the last days of germination.

The mean germination time (MGT) was evaluated according to Ellis and Roberts (1981) as follows:

Where D is the day of counting and n is the number of seeds germinated on each day.

The lengths of both plumule and radicle were measured in millimetres using hand potentiometric calliper (Keys et al. 1984).

The radicle and plumule were putted separately into paper packets and placed into a steamed for 48 hours at temperature of 70°C. Radicle dry weight (RDW) and plumule dry weight (PDW) were weighed in gram using precision balance.

Germination percentage (GP) was significantly affected at P <0.01 by NaCl doses (Table 1).The highest GP (100%) was recorded in the control, while the lowest GP (50%) was registered for 150 mM NaCl treatment. Shitole and Dhumel (2012) reported that increasing NaCl doses caused reduction in seed germination percentage. Figure 1.A illustrates the change in GP with different NaCl levels. Correlation coefficients between all combinations were shown in Table2. GP exhibited a strong positive correlations with germination index (0.844**), seed vigor index (0.782**), seed length (0.697**), radicle dry weight (0.697**) and plumule fresh weight (0.791**), and a negative correlation with mean germination time (-0.496*).

Significant differences at P <0.01 were found among NaCl treatments in term of germination index (GI) (Table.1). GI increased when the NaCl level decreased. The maximum GI (8.85) was observed in the control (Figure 1.B). Otherwise, GI showed a positive correlations with seed vigor index (0.766**) and RDW (0.752**) and a negative correlation with MGT (-0.502*) (Table 2). These results agree with those reported by Cokkizgin and Colkesen (2012).

Significant differences were found among NaCl treatments in relation to the coefficient of velocity of germination (CVG). For all treatments, the mean values of CVG ranged from 0.16 to 0.17 (Table1). Figure1.C showed the variation of the CVG according to the different NaCl treatments. However, CVG showed positive and significant correlation with SVI (0.666**), seed length (0.674**) and plumule dry weight (0.737**), but a strong negative correlation with MGT (-0.887**) (Table2). These results are also in agreement with those reported by Cokkizgin (2012).

Significant differences were observed among the NaCl levels in terms of MGT (Table 1). All the studied parameters decreased with increasing NaCl concentrations, except for MGT (Table 1). The maximum of MGT (6.10 days) was recorded in the 75 mM NaCl, whereas the lowest one (6.00 days) was observed with control. Nevertheless, our results indicate that MGT has a negative significant correlation with all parameters. A high significant negative correlations was reported for both plumule fresh weight (-0.704**) and plumule dry weight (-0.695**) (Table2). This funding corroborate with Cokkizgin (2012) who observed that MGT increase with increasing salinity concentrations. Similar studies reported by Bayuelo- Jiménez et al. (2002) on bean and Okçu et al. (2005) on pea cultivars, demonstrated that MGT increase with the addition of NaCl and this increase is more important when the salt concentration is higher.

Significant differences were observed between NaCl treatments for seed vigor index (Table1). SVI is considerably decreased with increasing NaCl concentrations (Figure 1.D). The highest SVI was recorded in control (656.19), whereas the lowest one was noted at 150 mM NaCl (97.71) (Table1). All parameters have highly significant correlations with SVI. A strong positive correlation of SVI was reported for seed length (0.977**), radicle length (0.822**) and plumule fresh weight (0.830**) (Table 2). Similar results showed a strong correlation between radicle growth and the vigorous level of a seed (Bingham et al. 1994).

The lengths and weights of both radicle and plumule were significant affected (P <0.01) by NaCl treatments (Table 1). The highest lengths of radicle and plumule were observed with control (3.13 and 0.90 cm respectively). Figure 1.E and F showed that morphological parameters decreased with increasing NaCl levels. Subsequently, a strong positive correlations were obtained between radicle dry weight and plumule dry weight, 0.628** and 0.737**, respectively as shown in Table 2. Similar results were obtained with dry weight. Thus, a positive correlations were registered between radicle dry weight and plumule fresh weight, 0.686** and 0.751**, respectively as noted in Table 2. These results agree with other reports in various species as for Pisum sativum (Cokkizgin and Colkesen 2012) and Durum wheat (Ayed et al. 2014). Furthermore, Khan et al. (1994; 1997) indicated that plumule length of Oryza sativa significantly decreased with an increase in salinity stress.

Our results showed that all studied parameters were gradually decreasing with increasing NaCl levels. There was an indirect relationship between NaCl levels and germination characteristics, i.e. the germination was influenced with increasing NaCl levels especially under salinity of 150 mM NaCl. Otherwise, high positive correlations were recorded between radicle length and seed vigor index and between coefficient of velocity of germination and plumule dry weight. The best germination features for all parameters are shown for both levels of salinity 50 and 100 mM NaCl. Based on these results, the germination test and soil analysis should be realized before seedling seeds on field conditions.

Special thanks to Dr. Badii Gaaliche for his precious help and guidance in statistical analysis of data.

Khan M, Hussain F, Ilahi I (1994) The effects of saline conditions on the emergence and establishment of various cultivars of sunflower. Sarhad J Agric 10: 1-19.

Maguire JD (1962) Seed of germination-aid in selection and evaluation for seedling emergence and vigor. Crop Science 2: 176-177.