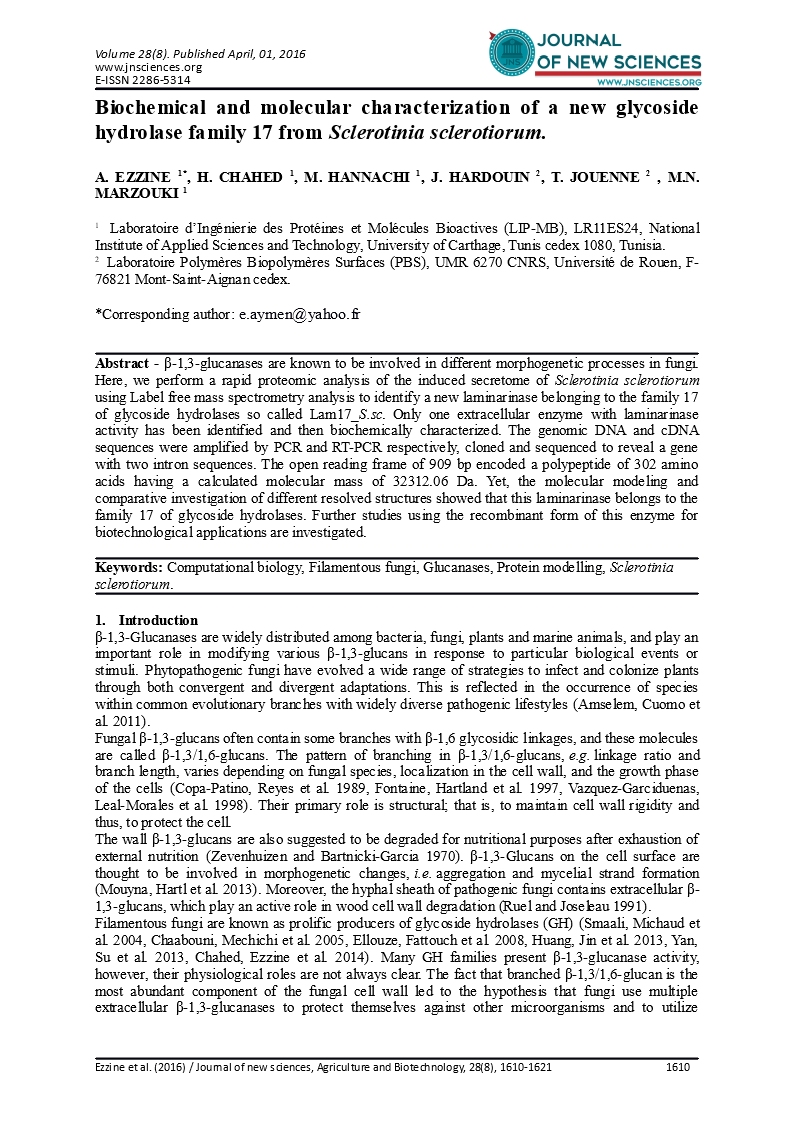 Abstract - β-1,3-glucanases are known to be involved in different morphogenetic processes in fungi. Here, we perform a rapid proteomic analysis of the induced secretome of Sclerotinia sclerotiorum using Label free mass spectrometry analysis to identify a new laminarinase belonging to the family 17 of glycoside hydrolases so called Lam17_S.sc. Only one extracellular enzyme with laminarinase activity has been identified and then biochemically characterized. The genomic DNA and cDNA sequences were amplified by PCR and RT-PCR respectively, cloned and sequenced to reveal a gene with two intron sequences. The open reading frame of 909 bp encoded a polypeptide of 302 amino acids having a calculated molecular mass of 32312.06 Da. Yet, the molecular modeling and comparative investigation of different resolved structures showed that this laminarinase belongs to the family 17 of glycoside hydrolases. Further studies using the recombinant form of this enzyme for biotechnological applications are investigated.

β-1,3-Glucanases are widely distributed among bacteria, fungi, plants and marine animals, and play an important role in modifying various β-1,3-glucans in response to particular biological events or stimuli. Phytopathogenic fungi have evolved a wide range of strategies to infect and colonize plants through both convergent and divergent adaptations. This is reflected in the occurrence of species within common evolutionary branches with widely diverse pathogenic lifestyles (Amselem, Cuomo et al. 2011).

Fungal β-1,3-glucans often contain some branches with β-1,6 glycosidic linkages, and these molecules are called β-1,3/1,6-glucans. The pattern of branching in β-1,3/1,6-glucans, e.g. linkage ratio and branch length, varies depending on fungal species, localization in the cell wall, and the growth phase of the cells (Copa-Patino, Reyes et al. 1989, Fontaine, Hartland et al. 1997, Vazquez-Garciduenas, Leal-Morales et al. 1998). Their primary role is structural; that is, to maintain cell wall rigidity and thus, to protect the cell.

The wall β-1,3-glucans are also suggested to be degraded for nutritional purposes after exhaustion of external nutrition (Zevenhuizen and Bartnicki-Garcia 1970). β-1,3-Glucans on the cell surface are thought to be involved in morphogenetic changes, i.e. aggregation and mycelial strand formation (Mouyna, Hartl et al. 2013). Moreover, the hyphal sheath of pathogenic fungi contains extracellular β-1,3-glucans, which play an active role in wood cell wall degradation (Ruel and Joseleau 1991).

β-1,3-Glucanases are often termed laminarinases since the most widely studied natural β-1,3-glucan-containing polymers is laminarin. Degradation of β-1,3-glucans by fungi often involves the cooperative action of multiple β-1,3-glucanases rather than a single enzyme. Although some fungal β-1,3-glucanases are constitutively produced, their expression levels are often controlled by culture conditions (Pitson, Seviour et al. 1993). Many β-1,3-glucanases have been characterized, and they exhibit a wide variety of substrate specificities and modes of actions (Martin, McDougall et al. 2007). These facts suggest the involvement of β-1,3-glucanases in mobilization of cell wall β-glucans especially in the case of yeast enzymes. However, in plants, glucanases are known by their protective role against fungal pathogens which was confirmed after their expression in a variety of plant species upon fungal invasion (Adams 2004).

S. sclerotiorum was maintained on potato dextrose agar medium (PDA). Actively growing fungal mycelium from a 3 days culture was transferred into 200 ml of enriched broth medium prepared according to Mandel's medium (Mandels and Weber 1969) supplemented with 1% (w/v) of laminarin before sterilization. After adding mycelium to the inducing medium, incubate on a rotary shaker at 150 rpm at 25°C for 5 days. The culture was centrifuged and the recovered supernatant was used as crude enzyme preparation.

The produced extracellular proteins were precipitated using 80% ammonium sulfate and recovered by centrifugation at 7500 rpm for 45min at 4°C. The pellet was resuspended in 100mM sodium acetate buffer (pH 5.0).

The standard assay for β-1, 3-glucanase activity contained 100 µl of 1% laminarin, 20 µl enzyme solution (15 µg of protein), and 180 µl of 0.1M sodium acetate buffer (pH 5.0). The reaction was incubated at 37°C, for 10 min. Reducing sugars released from laminarin were measured by the method of Dygert et al. (1965) (Dygert, Li et al. 1965). One unit of β-1,3-glucanase was defined as the amount of enzyme releasing 1µmol of glucose/min under these conditions.

For optimal temperature determination, the activity assay was performed at incubation temperatures varying from 35 to 65°C with 5°C intervals during 30min.

For metal ion effect measurement, the enzyme was pre-incubated for 60 min at room temperature with the following salts CaCl2, CuSO4, FeCl3, MgCl2, MnCl2, or ZnCl2 (1mM or 5mM) and the activity was assayed under the standard conditions using 1% laminarin as substrate.

Genomic DNA of S. sclerotiorum was purified according to a modified protocol of Sambrook et al.(Sambrook, Fritsch et al. 1989) and used as template for a polymerase chain reaction amplification of the glucanase gene, using specific primers: Forward: 5’-ATGCGCTCGCTCGTTATTCTCCCG-3’ and Reverse: 5’-TTAACAATTCAACGAGTACTTGCTGC-3’. The amplification was performed with 2.5U of Pfu DNA polymerase to generate blunt ended PCR products.

50µg of laminarin-induced crude extract were separated in 10% Native-PAGE. After migration, the polyacrylamide gel was cut into 2 mm fragments from its top to the bottom. Each fragment was ground in the activity buffer in order to elute the proteins from the gel. After a brief centrifugation, the soluble aliquotes were tested for β-glucanase activity with laminarin as substrate as described previously.

About 30 µg of proteins (from the crude extract) were resolved by 1D SDS-PAGE 7% and then briefly stained with Coomassie Blue. After destaining the gel, the protein band was excised and subjected to tryptic digestion. In brief, the disulfide bonds were reduced by the addition of dithiothreitol and the free cysteine residues were alkylated with iodoacetamide. The gel plugs were washed prior to a dehydration step, followed by the tryptic digestion. The resultant tryptic peptides were finally lyophilized and ready to use for the spectrometry analysis.

The corresponding amino acid sequence was deduced from the sequenced cDNA. Multalin software was used to generate the alignment of glucanases sequences (Corpet 1988). Rendering of the alignment figure including the prediction of the secondary structures was performed with the ESPript program (Gouet, Robert et al. 2003, Robert and Gouet 2014). Putative signal sequence was identified using the SignalP prediction software (Nielsen, Engelbrecht et al. 1997). The nucleotide sequence data of the GH17 of Sclerotinia sclerotiorum is available in the Gene Bank database (NCBI Reference Sequence: XM_001595467.1).

They have also a physiological role in morphologic and morpholytic processes during fungal development and differentiation and general cell wall modification. In Sclerotinia sclerotiorum, we can identify a complex system of extracellular enzymes with large spectral activities. Cellulolytic and non cellulolytic glucanases including β-1,4-; β-1,6- and β-1,3-Glucanases are the most identified.

To identify and characterize the number of glucanase isoforms, if any, the S. sclerotiorum secreted proteins were analyzed by native PAGE. As shown in figure 2, the glucanase activities measured from cut bands revealed the presence of a unique laminarinase isoform under these induction conditions. This slab enzyme activity test is an efficient method to screen for different isoforms displayed in a protein mixture in a relatively fast way.

Furthermore, a Label-free mass spectrometry analysis was performed to the secreted protein mixture of S. sclerotiorum. This technique is used to identify few quantities of polypeptides into protein mixtures. Therefore, we applied this efficient technique to characterize all putative laminarinases induced and secreted by this pathogenic fungus (Figure S1). Results showed that only one putative Glucan β-1,3-glucosidase isoform that can exhibit laminarinase activity from secreted proteins. Two peptide sequences were identified by LC-MS/MS (Table 1).

They belong to the amino acid sequence of the glucan β-1,3-glucosidase previously determined as a putative protein in the Gene Bank database. This polypeptide is formed by 302 amino acid residues and has a theoretical molecular weight of 32.3 kDa with a calculated pI of 4.78.

This analysis enabled us to confirm the presence of a single isoform of β-1,3-glucanase exhibiting laminarinase activity and consequently, we can directly use the crude extract without proceeding to purification steps, especially since the enzyme quantity and activity is also too low.

Similarly, when the β-1,3-glucanase from A. fumigatus was pre-incubated for 1h at different temperatures, its stability was found to be markedly reduced at temperatures higher than the optimum temperature for activity (Fontaine, Hartland et al. 1997).

Using laminarin as assay substrate, a range of mono-, di and trivalent metal ions were examined for their effect on the extracellular β-1,3-glucanase activity from S. sclerotiorum.

Analysis of the results presented in Table 2 showed that the laminarinase activity was markedly sensitive to Mn2+, Cu2+ and Zn2+ divalent cations.

CuSO4 presented an important inhibitory effect on the extracellular S. sclerotiorum β-1,3-glucanase activity. However, MnCl2 increased significantly the laminarinase activity. These findings suggest the presence of an accessible, essential sulfhydryl or other readily oxidisable groups in this enzyme. The T. emersonii enzyme was also relatively unaffected by a range of metal ions and chemical modifiers (O'Connell, Piggott et al. 2011).

Genomic DNA and cDNA of the S. sclerotiorum β-1,3 glucanase were amplified using the corresponding genome and total RNA, respectively. According to figure 4-A, we succeeded to amplify fragments of 1090 bp and 909 bp corresponding to the expected sizes of the genomic DNA and cDNA of the Glucan β-1,3 glucosidase sequences, respectively. Nucleotide sequences of the obtained PCR products were subsequently cloned and sequenced.

The resulted sequences were aligned and two introns were identified (figure 4-B). This result confirmed the theoretical gene sequence reported after the S. sclerotiorum whole genome sequencing. This sequence is available under the NCBI Reference: XM_001595467.1. Translation of the open reading frame provides the same glucanase amino acid sequence referenced in the database. Hence, the predicted protein sequence is composed of 302 amino acids and has a calculated molecular weight of 32311.9 Da and an isoelectric pH of 4.57.

These data are in perfect correlation with the label free mass spectrometry data and confirm that we have characterized the only laminarinase isoform secreted under these conditions of induction.

Multiple alignment of the amino acid sequence of the studied glucanase with proteins database show that this enzyme belongs to the super-family 17 of glycosyl hydrolases (GH).

The ESPript analysis program allowed the prediction of the laminarinase secondary structure based on the multiple alignments to proteins with defined structures (Figure 5).

This prediction study elucidates the presence of eight β-sheets and eight α-helices localized in conserved regions. This typical (β/α)8 TIM-barrel motif found in GH17 consists of an internal crown of eight β-strands connected by more or less extended loops to an outer crown of eight α-helices. An additional C-terminal loop containing generally a β-sheet formed by two short antiparallel strands protrudes from the external crown of α-helices.

Hence, we can confirm that our laminarinase enzyme belongs to the family 17 of glycoside hydrolases and for this reason we can name it as Lam17_S.sc.

A modeling study has been performed with RaptorX program to predict the 3D structure of the studied laminarinase. The model is shown to have a typical structure similar to GH17 enzymes based on the resolved crystal structure of the one from banana (2CYG) performed at 1.45Å resolution (Receveur-Brechot, Czjzek et al. 2006).

This program permitted to edit a predicted structure that matches with the typical GH17 tertiary structure presented by a TIM-barrel with a (β/α)8 motif (Figure 6). SignalP prediction analysis showed that the N-terminus of Lam17_S.sc contains a signal sequence for extracellular expression (figure 7-A). In the maturation steps and secretion procedures, the signal peptide is automatically removed to release the active protein (Figure 7-B). Based on the RaptorX program criterions, the created 3D model has a high indicator for a good quality. The predicted binding residues, colored in green into the surface defined model, are potentially involved in different substrates binding and stacking of the sugar rings of the substrate (S119, W155, F179, W182, F263, K271, P272, E284, and W287). Moreover, K29, Y60, E268 and K271 are also suggested to be putative catalytic residues for different ligands like β-D-Glucose.