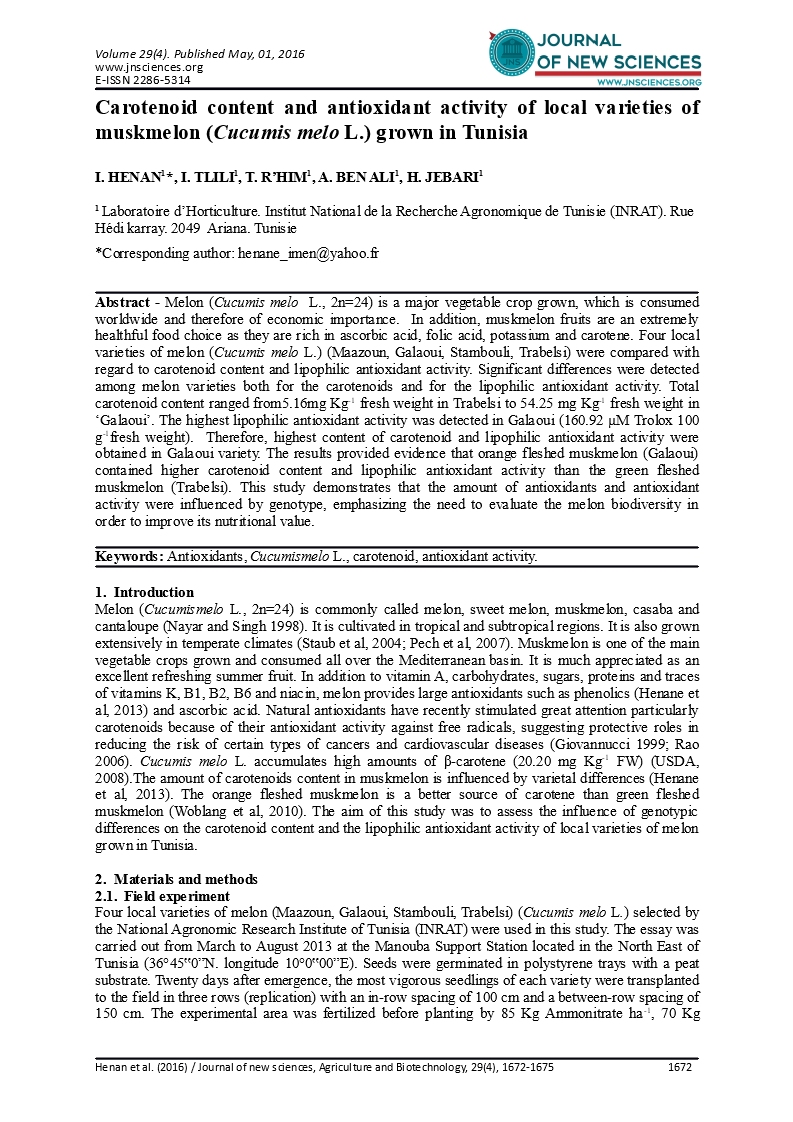 Melon (Cucumismelo L., 2n=24) is commonly called melon, sweet melon, muskmelon, casaba and cantaloupe (Nayar and Singh 1998). It is cultivated in tropical and subtropical regions. It is also grown extensively in temperate climates (Staub et al, 2004; Pech et al, 2007). Muskmelon is one of the main vegetable crops grown and consumed all over the Mediterranean basin. It is much appreciated as an excellent refreshing summer fruit. In addition to vitamin A, carbohydrates, sugars, proteins and traces of vitamins K, B1, B2, B6 and niacin, melon provides large antioxidants such as phenolics (Henane et al, 2013) and ascorbic acid. Natural antioxidants have recently stimulated great attention particularly carotenoids because of their antioxidant activity against free radicals, suggesting protective roles in reducing the risk of certain types of cancers and cardiovascular diseases (Giovannucci 1999; Rao 2006). Cucumis melo L. accumulates high amounts of β-carotene (20.20 mg Kg-1 FW) (USDA, 2008).The amount of carotenoids content in muskmelon is influenced by varietal differences (Henane et al, 2013). The orange fleshed muskmelon is a better source of carotene than green fleshed muskmelon (Woblang et al, 2010). The aim of this study was to assess the influence of genotypic differences on the carotenoid content and the lipophilic antioxidant activity of local varieties of melon grown in Tunisia.

Four local varieties of melon (Maazoun, Galaoui, Stambouli, Trabelsi) (Cucumis melo L.) selected by the National Agronomic Research Institute of Tunisia (INRAT) were used in this study. The essay was carried out from March to August 2013 at the Manouba Support Station located in the North East of Tunisia (36°45‟0”N. longitude 10°0‟00”E). Seeds were germinated in polystyrene trays with a peat substrate. Twenty days after emergence, the most vigorous seedlings of each variety were transplanted to the field in three rows (replication) with an in-row spacing of 100 cm and a between-row spacing of 150 cm. The experimental area was fertilized before planting by 85 Kg Ammonitrate ha-1, 70 Kg phosphoric acid ha-1, 130 Kg potassium nitrate ha-1, 80 Kg magnesium sulfate ha-1. Other agronomic practices including irrigation, weeding and chemical insecticide treatments were conducted uniformly and as required in all plots.

Fruits were cut longitudinally from stem-end to blossom end through the ground spot and tissues samples were taken from the central part of each fruit. Muskmelons flesh was cut in pieces and homogenized in a mixer. The Juice of melon was wrapped with aluminum, put in plastic bags and kept quickly at -80° C.

Total carotenoid content was extracted withhexane/ethanol/acetone (2:1:1 by vol.) containing 0.05% butylatedhydroxytoluene (BHT). The absorbance was measured at 540 nm with a Cecil BioQuest CE 2501 spectrophotometer (Cecil Instru- ments Ltd., Cambridge, UK), as described by fish et al, (2002). During the extraction process and the analysis, some precautions were taken, like working in a reduced luminosity room and wrapping glass materials in aluminum foil to minimize carotenoids loss by photo-oxidation. Total carotenoids were expressed as mg of carotenoids equivalents Kg-1fresh weight (FW).

The antioxidant activity was measured using the ABTS decoloration method (Pellegrini et al, 2007). Lipophilic antioxidant was extracted from 0.3g homogenous juice (three replicates) with 50% acetone, at 4°C under constant shaking (300rpm) for 12h. Samples were centrifuged at 10,000 × g for 7min.The antioxidant activities were measured at 734 nm in a Cecil Bio Quest CE2501spectrophotometer.Values were obtained from three replicates as µmolTroloxper100g of melon FW(µmolTrolox/100g FW).

The carotenoid content in different local varieties of melon was shown in Figure 1. The analysis of variance showed a highly significant (P<0.01) difference between studied muskmelon varieties.

The results showed that values ranged from 5.16 mg kg-1 FW in Trabelsi (green flesh) to 54.25 mg kg-1 FW in Galaoui (orange flesh). The carotenoid content obtained in Galaoui was more than 9- folder higer than those obtained in Trabelsi. Generally, highest values of carotenoids were obtained for orange pulp varieties. Our results are close to the range obtained by Woblang et al, (2010) who studied the influence of pre- and post-harvest factors on the β-carotene content and antioxidant capacity in melon. Higher values attaining 31 mg Kg -1 FW were obtained in orange pulp muskmelon varieties by Navazio et al, 1994. These divergent results may be explained by variety or environmental differences.

The lipophilic antioxidant activity (LAA) values determined by the TEAC assay in muskmelons varieties are presented in figure 2. The results showed that the LAA varied significantly among the different local varieties of muskmelon (P<0.01). Lipophilic antioxidant activity ranged from 22 µM Trolox-1FW in Maazoun to 160.92 µM Trolox-1FW in Galaoui. ALA obtained in ‘Galaoui’ was more than 7- fold higher than those obtained in Maazoun. The obtained values were lower compared to those reported by Rodrigues et al, (2011) varying from 1238.4896 to 2445.96 µM 100 g Trolox-1FW in blueberry. Our results were in agreement with those found by Tlili et al, (2010) ranging from 195.23 to 283.97 µM 100 g Trolox-1 FW in watermelon varieties. Furthermore, the results found are also higher than those reported by Wu et al, (2004) (0.66 µM Trolox-1PF 100 g) in varieties of apricots.

Our data highlight the important role played by genetic in determining the antioxidant potential of muskmelon. In this study, Galaoui obtained the highest carotenoid content and lipophilic antioxidant activity. Therefore, our results provided that orange fleshed muskmelon contained the highest value of carotenoid content and lipophilic antioxidant activity than the green fleshed muskmelon. These data are useful to plant breeders and food scientists working to maximize the nutritional value and antioxidant contents of muskmelon varieties. Furthermore, they prove that this refreshing summer fruit is a valuable source of dietary antioxidants for the population of the Mediterranean area because of its availability and high consumption.

Pellegrini N, Colombi B, Salvatore S, Brenna O, Galaverna G, Del Rio D (2007) Evaluation of antioxidant capacity of some fruit and vegetable foods: Efficiency of extraction of a sequence of solvants. Journal of the science of food and agriculture 87:103-111.