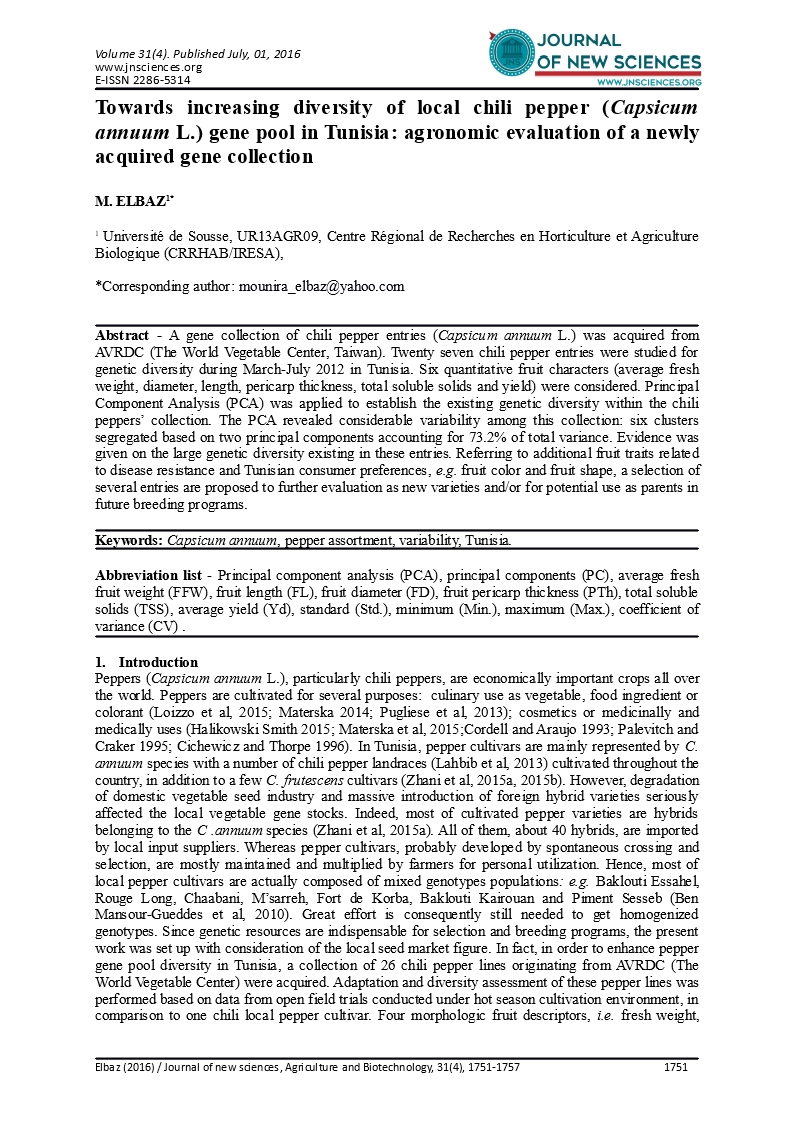 Peppers (Capsicum annuum L.), particularly chili peppers, are economically important crops all over the world. Peppers are cultivated for several purposes: culinary use as vegetable, food ingredient or colorant (Loizzo et al, 2015; Materska 2014; Pugliese et al, 2013); cosmetics or medicinally and medically uses (Halikowski Smith 2015; Materska et al, 2015;Cordell and Araujo 1993; Palevitch and Craker 1995; Cichewicz and Thorpe 1996). In Tunisia, pepper cultivars are mainly represented by C. annuum species with a number of chili pepper landraces (Lahbib et al, 2013) cultivated throughout the country, in addition to a few C. frutescens cultivars (Zhani et al, 2015a, 2015b). However, degradation of domestic vegetable seed industry and massive introduction of foreign hybrid varieties seriously affected the local vegetable gene stocks. Indeed, most of cultivated pepper varieties are hybrids belonging to the C .annuum species (Zhani et al, 2015a). All of them, about 40 hybrids, are imported by local input suppliers. Whereas pepper cultivars, probably developed by spontaneous crossing and selection, are mostly maintained and multiplied by farmers for personal utilization. Hence, most of local pepper cultivars are actually composed of mixed genotypes populations: e.g. Baklouti Essahel, Rouge Long, Chaabani, M’sarreh, Fort de Korba, Baklouti Kairouan and Piment Sesseb (Ben Mansour-Gueddes et al, 2010). Great effort is consequently still needed to get homogenized genotypes. Since genetic resources are indispensable for selection and breeding programs, the present work was set up with consideration of the local seed market figure. In fact, in order to enhance pepper gene pool diversity in Tunisia, a collection of 26 chili pepper lines originating from AVRDC (The World Vegetable Center) were acquired. Adaptation and diversity assessment of these pepper lines was performed based on data from open field trials conducted under hot season cultivation environment, in comparison to one chili local pepper cultivar. Four morphologic fruit descriptors, i.e. fresh weight, length, diameter and wall thickness, as well as total soluble solids and fruit yield were assessed. Principal component analysis (PCA) multivariate method was applied for the chili pepper collection’s assessment. The main objective of this approach was to identify the existing genetic diversity within chili collection entries and to distinguish potentially suitable material for future utilization as new varieties or eventual genitors in future breeding programs.

Twenty six chili pepper entries (Table 1) were acquired from AVRDC gene bank. One local pepper variety, Baklouti, was also included in the present work as a local control. The experiment design was a randomized complete block with three replications. Each plot contained 20 plants. Plant spacing was 40 cm within and 100 cm between rows. Plants were watered with a drip irrigation system and they were cultivated using the standard horticultural practices in the region for open field pepper varieties.

Significant differences among the collection of C. annuum chili peppers were shown for all the studied characters (Tables 2). Mean values, standard (Std.) Error, minimum (Min.) and maximum (Max.) values showed wide range of all parameters measured. In addition, coefficient of variance (CV) ranges from 24.3 (FL) to 69.3 % (FFW). These results are giving evidence on considerable genetic diversity occurrence within the pepper collection.

Aiming to identify divergent entries’ groups, multivariate PCA was applied to the chili pepper data set. Multivariate PCA of chili pepper entries based on fruit descriptors (fresh weight, length, diameter and pericarp thickness), TSS and average yield, came out with two principal components (PC1 and PC2). Table 3 shows proportional share of each trait in these two PC. PC1 explained 46.41% of the total variance, and its loading was for three fruit descriptors: fresh weight, diameter and pericarp thickness. PC2 explained 26.78% of the total variance and it is accounted for by fruit length, TSS and yield. TSS is also negatively correlated with PC1. The two principal components accounted for 73.19% of the total variance.

CIV, containing entries number12, 13 and 17, had intermediate score of C1, but lowest score of C2. Accordingly, this cluster is characterized by small fruits and low yield: average parameters in CIV are FFW=2.69g, FD=9.80mm, PTh=1.03mm and Yd=0.67kg/plant. Entries in CIII clustered at the center of Figure 1 suggesting intermediate values of all parameters. It is the largest cluster including 14entries, referring to following trait averages: FFW=9.30g, FD=14.27mm, PTh=1.69mm, FL=98.96mm, TSS=8.24°Brix and Yd=0.97kg/plant.

Cluster CVI enclosed entry 26, while CV harbored local variety Baklouti only. They located at two opposite positions and had lowest and highest scores of PC1 respectively, but similar scores of PC2. It follows that the two entries had similar performance regarding TSS and yield but differ at fruit size and weight parameters where local Baklouti variety had higher scores, i.e. it has heavier and bigger fruits.

To sum up, cluster CIII was the largest one covering 14 entries characterized by intermediate values of all parameters. Whereas clusters CI and CII contained 5 and 3 entries, respectively, and performed the best for fresh fruit weight, fruit diameter and fruit pericarp thickness. Local variety Baklouti formed cluster CV by itself. Unsurprisingly, this variety is of potential interest to be used as parent in breeding program because of its phenotypic and horticultural characters.

Remaining pepper entries had small fruits with fruit weight and fruit length ranging from 2 to 9 g and from 6 to 11 cm, respectively. In addition to their potential value as genitors in breeding programs, industrial use might be possible for some of these entries, especially those offering good yield levels. Nevertheless, this proposal hasn’t been explored yet. For instance, entries 22 and 26 with high TSS levels (exceeding 14 °Brix) might represent an interesting material for industrial processing utilization.

This work was carried out seeking to enrich the C. annuum gene pool in Tunisia using a collection of chili pepper lines acquired from AVRDC, which include entries from Taiwan and India.

Considering yield performance, average yield of pepper production in Tunisia was 16.8t/ha in 2012 (Observatoire National de l’Agriculture), while recorded yields during this work was from 12.7t/ha (entry 17) to 43.3t/ha (entry 23), and 6 of them yielded more than 30t/ha. Baklouti variety, used as a control, gives 18.4t/ha.

In Tunisia, pepper gene stock is mainly comprised of C. annuum besides C. frutescens species (Zhani et al, 2015a, 2015b; Lahbib et al, 2013). Most of Tunisian cultivars are maintained by farmers in a population structure, except very few cultivars which have been closely purified (e.g. Baklouti cultivar). Consequently, the majority of commercial pepper varieties are imported hybrids: more than 4.5t of pepper hybrid seeds have been imported in 2015. Importing highly productive varieties is valuable for pepper crop in Tunisia. However, it was reported that shipments have transported two harmful foreign diseases, Verticillium wilt and Phytophthora blight (M’Hamdi et al, 2009). These fungal diseases are causing severe losses both in field and greenhouse pepper production areas. Accordingly, producing pepper seeds locally will offer an alternative to enhance pepper production in Tunisia and prevent introduction of new diseases. Furthermore, useful information related to Tunisian consumer preferences (e.g. immature fruit color and fruit shape) should be considered during entries selection. From current collection of chili pepper, entries 23 and 25 had an additional interest; in fact they were shown to be resistant to Phytophthora nicotianae (Elbaz et al, 2015). In addition, based on laboratory assays performed in Taiwan (AVRDC), entry 23 was resistant to several viruses (CMV-Cucumber Mosaic Virus; CVMV-Chili Veinal Mottle Virus; PVY-Potato Virus Y and ToMV-Tomato mosaic virus).

Characters studied differentiated pepper entries into several groups from which superior hybrids could be achieved. Crosses that would be performed should be planned based on the genetic divergence and on the key agronomic traits. Parents of one cross should involve entries from distant clusters to increase variability and produce transgressive segregants allowing identification of material with high heterotic effects. Outputs from this work provide promising parent entries that should be considered as reservoir genes. They will definitely offer positive impact on the development of pepper seed sector in Tunisia. Interestingly, some of studied entries have already been released as open field varieties in several countries: entry 4 (Kazakhstan and Uzbekistan), entry 5 (Kazakhstan), entry 7 (Armenia), entry 10 (Kazakhstan and Mali) and entry 15 (Uzbekistan and Mali) (Lin et al, 2013). To conclude, the main objective of this work was reached since it came out with several pepper entries that possibly can be used either as new varieties or as parents in breeding programs.

This work was aiming to enrich the C. annuum gene pool in Tunisia using 26 chili pepper entries originating from Taiwan and India. The multivariate PCA came out with six clusters showing high variation among the pepper collection based on fruit descriptors, TSS and yield. Nine pepper entries, originating from three different PCA clusters, were selected for their fruit size adequate to local consumers’ preferences. All of these entries, except one (entry 19), gave higher yield than the local control variety (Baklouti), and six of them yielded more than 30t/ha. Interestingly, considering disease resistance, entries 23 (43.3t/ha) and 25 (37.4t/ha) were shown to be resistant to P. nicotianae according to a previous work. Also, entry 23 is known as resistant to CMV, CVMV, PVY and ToMV. Moreover, further investigation on fruit quality will be performed to make a better selection of entries that will be involved in breeding work. Therefore, the main purpose of this work was reached and several pepper entries were shown to be potentially useful as new varieties or genitors to develop new hybrids. Finally, major outcome of this work is to contribute to build up a local pepper seed industry in Tunisia.

This investigation was supported by special grant from IRESA (Institution of Agricultural Research and Higher Education, Ministry of Agriculture-Tunisia).

Halikowski Smith S (2015) In the shadow of a pepper-centric historiography: Understanding the global diffusion of capsicums in the sixteenth and seventeenth centuries. J Ethnopharmacol 167: 64–77.