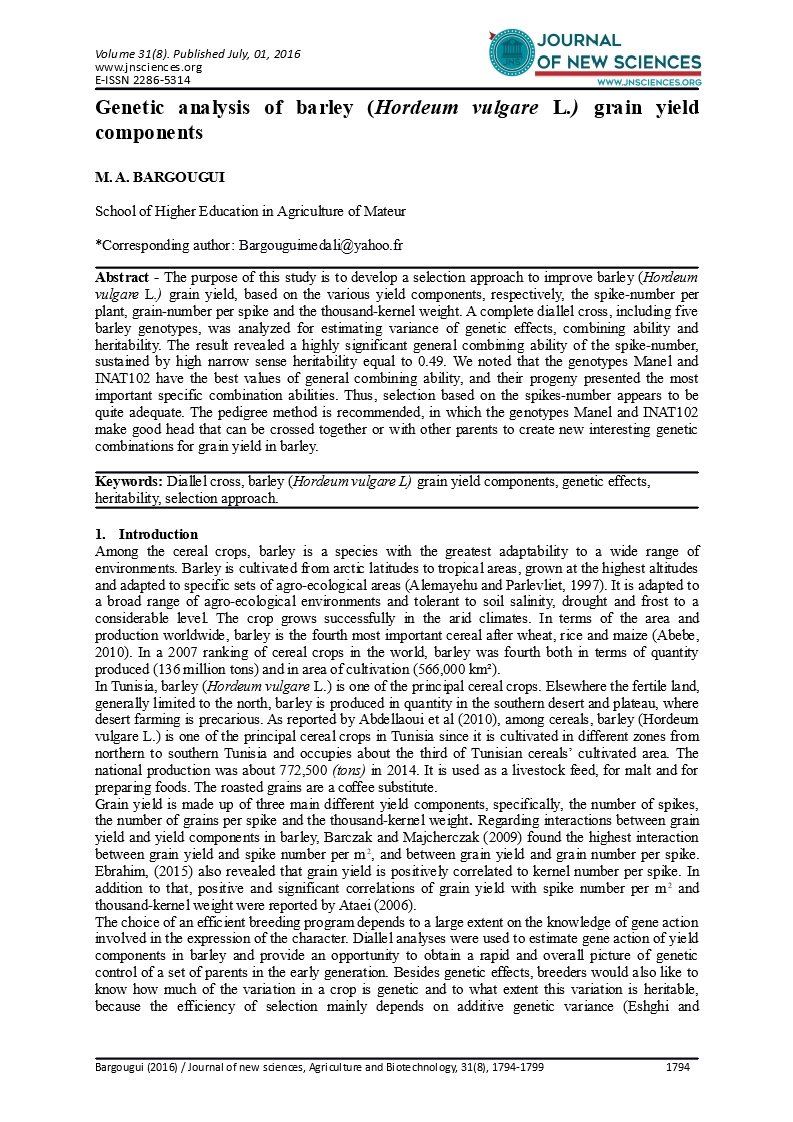 School of Higher Education in Agriculture of Mateur

Abstract - The purpose of this study is to develop a selection approach to improve barley (Hordeum vulgare L.) grain yield, based on the various yield components, respectively, the spike-number per plant, grain-number per spike and the thousand-kernel weight. A complete diallel cross, including five barley genotypes, was analyzed for estimating variance of genetic effects, combining ability and heritability. The result revealed a highly significant general combining ability of the spike-number, sustained by high narrow sense heritability equal to 0.49. We noted that the genotypes Manel and INAT102 have the best values of general combining ability, and their progeny presented the most important specific combination abilities. Thus, selection based on the spikes-number appears to be quite adequate. The pedigree method is recommended, in which the genotypes Manel and INAT102 make good head that can be crossed together or with other parents to create new interesting genetic combinations for grain yield in barley.

Among the cereal crops, barley is a species with the greatest adaptability to a wide range of environments. Barley is cultivated from arctic latitudes to tropical areas, grown at the highest altitudes and adapted to specific sets of agro-ecological areas (Alemayehu and Parlevliet, 1997). It is adapted to a broad range of agro-ecological environments and tolerant to soil salinity, drought and frost to a considerable level. The crop grows successfully in the arid climates. In terms of the area and production worldwide, barley is the fourth most important cereal after wheat, rice and maize (Abebe, 2010). In a 2007 ranking of cereal crops in the world, barley was fourth both in terms of quantity produced (136 million tons) and in area of cultivation (566,000 km²).

The choice of an efficient breeding program depends to a large extent on the knowledge of gene action involved in the expression of the character. Diallel analyses were used to estimate gene action of yield components in barley and provide an opportunity to obtain a rapid and overall picture of genetic control of a set of parents in the early generation. Besides genetic effects, breeders would also like to know how much of the variation in a crop is genetic and to what extent this variation is heritable, because the efficiency of selection mainly depends on additive genetic variance (Eshghi and Akhundova, 2009). These authors reported additive genetic effects of tillers number and an over-dominance gene action for number of grains per spike.

Genetic study of forage yield and other traits in barley (Hordeum vulgare L.), based on twenty one genotypes of six – parent half diallel analysis, realized by Pal and Kumar (2009) revealed significant role of additive genetic component for the inheritance of days to 50% heading, plant height and spikelets per ear. A non-additive component was found to be important for the genetic control of all the traits except for days to 50% heading and tillers per plant.

Concerning the approaches of grain yield improvement in barley, Lalić et al (2006) reported that genetic gain estimates showed that pedigree method was efficient for shorter stem, higher number of spikes per plant, and single grain weight and grain yield per plant. While single seed descent method was superior for grain yield per plant. This approach is also based on the heritability of the various characteristics and on the general combining abilities of the parental genotypes. Thus, the choice of the hybridization between the head of lines is made according to the best specific combining abilities.

To quantify the yield, we measured its three most interesting components, respectively the spike-number per plant, the grain-number per spike, and the thousand-kernel weight.

A complete diallel cross including five barley genotypes, Rihane, Manel, Martin, INAT-102 and Souihli (Bargougui, 2016) had been realized. The five parental lines and their 20 hybrids progenies were grown the same year and under the same crop conditions, according to a completely randomized design, in which the experimental unit is represented by a row of 125 cm length for each genotype.

The analysis of the variance for the spike-number (Table 1) showed that only the genetic effect contributed to a significant variation, the effect of the replicates was not significant

Duncan t test revealed an important variability of the spike-number and if we consider the genotype INAT102 as having the minimal value for the best cross choice, we note that the majority of its own hybrids are significantly superior. Indeed the most interesting hybrid was resulting from INAT102 crossed with Manel.

The decomposition of the genetic effect (Table: 2) showed the preponderance of the general combating ability, indicating that this characteristic depends probably more on the additive genetic action than on the interactions. This is of a great interest for the genetic improvement of this component.

The classification of parents according to their general combining abilities (Table 3) revealed a very important variation, which supports already the analysis of the variance. This classification puts at the head the genotype INAT-102 followed by Manel and Rihane. Thus, to improve this characteristic the genotype INAT-102 seems to be the best head of lines in any future cross.

For the grain-number, both genotypes and replicates showed high significant variation (Table 4). This indicates that this characteristic is influenced by the environment conditions generating an individual variation and an essential genetic effect.

Duncan t test showed that the genotype Martin had the best value, which differs significantly from the other parents except when compared to the INAT102. An increased value is noted for the majority of their hybrids. The decomposition of the genetic effect (Table 5) showed that there is a prevalence of the specific combining ability and reciprocal effect. This indicates that genetic improvement of grain yield based on this characteristic is less probable.

Similar results are obtained by Madić et al (2014), particularly for grain number per spike. The classification of parents according to their general combining abilities for the grain-number (Table 6) sets the genotypes Rihane and Souihli in the best ranks. INAT-102 showed a negative value, which differs from the preceding classification according to the spike-number.

For the thousand-kernel weight, the analysis of variance (Table 7) indicates that the replicate effect remains relatively important. This indicates that this characteristic undergoes the environment effects. However, genotypic variation is more important.

The genotypes classification according to the thousand-kernel weight showed that Martin is the genotype that has the most important thousand-kernel weight followed by Manel and souihli. For this characteristic INAT-102 has a relatively moderate value. However, its hybrids remain among the best hybrids. Overall, the hybrids expressed a more important performance, compared to the parental genotypes. This avoids any restriction to choose the best hybrid combinations. According to the analysis of the variance (Table 8), we notice the prevalence of the effects of genetic interaction and the reciprocal effects compared to the general combining ability.

The classification of the genotypes according to their general combining ability for thousand-kernel weight (Table 9) puts the genotype Martin at the first rank followed by Manel variety.

As a conclusion, we may retain that the spike-number constitutes the component that imply the additive genetic effect, and can be used to genetic improvement of the grain-yield of the Barley.

Taking into account these results, INAT102 and Manel genotypes can be considered as being suitable parental genotypes and their cross as the better hybrid combinations to select best resistant varieties with better grain yield.

The narrow sense heritability values of the three yield-components were estimated by the regression of the hybrid values on their respective parents (Falconer, 1960). As it is shown in the table 10, only the spike-number has significant heritability values.

This result sustains another time the prevalence of the general combining abilities, noted previously for these characteristics. Particularly, the spike-number is a heritable yield-component and it can be useful for the improvement of barley grain-yield. In fact, Yadav et al (2015) reported corresponding conclusions.

Let us recall first that the genetic analysis allowed us to consider the genotypes Manel and INAT102 as the best parents for the creation of new genetic combinations interesting for the barley grain-yield. The choice of the parents has been done according to their general combining abilities. The choice of their hybrid crossings will be based on the specific combining ability given by the table 11.

Crosses including Manel and INAT102 as parental genotypes exhibit an interesting specific combining abilities which likely can be considered as being suitable heads of lines in a genetic improvement program to increase the spike-number.

Selection based on the spike-number appears to be possible to create new high yielding barley varieties. A pedigree method, in which the Manel and INAT102 genotypes constitute the best parents who can be cross between them or with other parents, is recommended.

Barley (Hordium vulgare L.) is self pollinated species and improved genotypes are often developed by inbreeding within population formed by artificial hybridization. In such case, improvement schemes involve crossing between parental lines followed by a selection among their segregating generations. It is necessary to establish the number of generations required to get a sufficient and adequate level of uniformity to obtain lines possessing desirable attributes. Cultivars displaying high performances that can be released for use are derived as early as the F2 and as late as the F11 generation.

For highly heritable traits, pedigree selection is appropriate to obtain homogeneous improved lines promptly. F2 genotypes are subjected to individual plant selection for desirability in one or more important traits. Then, selected plants are harvested individually and followed by progeny testing.

Such a study revealed high heritability of the spike-number, allowing efficient selection for yielding barley varieties. The combining abilities analyses showed a mainly additive genetic effect. So selection should be earlier in order to carry the characters within individual homozygous lines.

A pedigree method in which the Manel and INAT102 genotypes constitute the best parents that can be inter-crossed or crossed with other parents is recommended. Hybridization can include more than two parents and more complex crosses can be used to combine different interesting genes within potential new improved varieties. According to Bargougui (2016) result, we recommend simultaneous selection for the spikes-number and powdery mildew “Erysiphe graminis f. sp.” resistance to improve grain yield of barley. In deed Simmonds (1988) indicated that the main problem lies in combining the resistance with other improved characteristics to create high-yielding varieties.