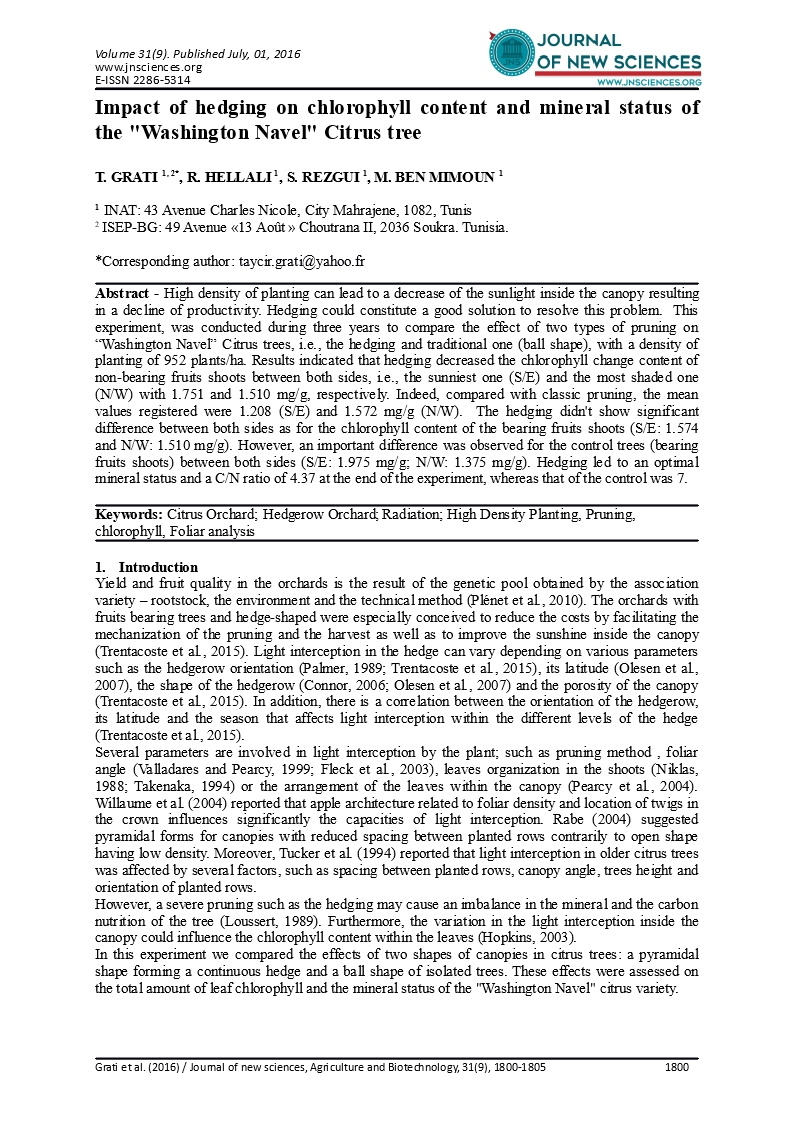 Abstract - High density of planting can lead to a decrease of the sunlight inside the canopy resulting in a decline of productivity. Hedging could constitute a good solution to resolve this problem. This experiment, was conducted during three years to compare the effect of two types of pruning on “Washington Navel” Citrus trees, i.e., the hedging and traditional one (ball shape), with a density of planting of 952 plants/ha. Results indicated that hedging decreased the chlorophyll change content of non-bearing fruits shoots between both sides, i.e., the sunniest one (S/E) and the most shaded one (N/W) with 1.751 and 1.510 mg/g, respectively. Indeed, compared with classic pruning, the mean values registered were 1.208 (S/E) and 1.572 mg/g (N/W). The hedging didn't show significant difference between both sides as for the chlorophyll content of the bearing fruits shoots (S/E: 1.574 and N/W: 1.510 mg/g). However, an important difference was observed for the control trees (bearing fruits shoots) between both sides (S/E: 1.975 mg/g; N/W: 1.375 mg/g). Hedging led to an optimal mineral status and a C/N ratio of 4.37 at the end of the experiment, whereas that of the control was 7.

Several parameters are involved in light interception by the plant; such as pruning method , foliar angle (Valladares and Pearcy, 1999; Fleck et al., 2003), leaves organization in the shoots (Niklas, 1988; Takenaka, 1994) or the arrangement of the leaves within the canopy (Pearcy et al., 2004). Willaume et al. (2004) reported that apple architecture related to foliar density and location of twigs in the crown influences significantly the capacities of light interception. Rabe (2004) suggested pyramidal forms for canopies with reduced spacing between planted rows contrarily to open shape having low density. Moreover, Tucker et al. (1994) reported that light interception in older citrus trees was affected by several factors, such as spacing between planted rows, canopy angle, trees height and orientation of planted rows.

However, a severe pruning such as the hedging may cause an imbalance in the mineral and the carbon nutrition of the tree (Loussert, 1989). Furthermore, the variation in the light interception inside the canopy could influence the chlorophyll content within the leaves (Hopkins, 2003).

In this experiment we compared the effects of two shapes of canopies in citrus trees: a pyramidal shape forming a continuous hedge and a ball shape of isolated trees. These effects were assessed on the total amount of leaf chlorophyll and the mineral status of the "Washington Navel" citrus variety.

The study was carried out in the region of Cap Bon (37° N, 10° E) considered as the main cultivation citrus area in Tunisia. The region has a cold semi-arid climate mitigated by the sea. The "Washington navel" variety of Citrus sinensis was used in this experiment and was grafted on Citrus aurantium rootstok. The orchard was four years old at the beginning of the experiment. The plantation density is 952 trees/ha with 3.5m x 3 m spacing. Two pruning methods were applied: (i) a hedging forming a continuous pyramidal hedge indicated as treatment; (ii) an open vase which is the traditional pruning for Citrus in the region, forming a ball shaped canopy as control. For each type of pruning, measurements were performed during three years throughout the spring, summer and autumn development, on the 8th, 9th and 10th year old of the orchard. However, only results related to the development of the spring flush which is the most important under Mediterranean climate for photosynthetic activity, are presented in this paper.

Pruning consisted in cutting vegetative growth that develops beyond the desired shape. The vegetation which develops on the plantation line and between trees is slightly cut whereas extensions were not cut in order to obtain a continuous hedge with NE/SW orientation.

The ball shape: for the control aimed to obtain a low, solid and airy frame, with a limited number of large branches (three to four). These criteria are achieved in a lowered ball with short trunk and foliage at low height.

Nine citrus trees of each pruning treatments were randomly divided into three groups. For chlorophyll analysis, leaves from both fruiting and non-fruiting shoots on both sides of the canopy (S/E and N/W) were sampled. The total Chlorophyll amount (TC) (mg/g fresh weight) of bearing fruit shoots and non-bearing fruit shoots was determined according to the method of Mac Kinney (1941). Absorbance was determined using a "Bauch& Lamber" spectrometer at a wave length (ʎ) of 652 nm.

Leaves were sampled at the beginning of September, and were six to eight months old. They were obtained from their spring shoots of the same year. Leaves were cut from branches bearing fruits at their extremity, at human height, on the periphery and on the S/E side of the tree. The following parameters were assessed: nitrogen content by the Kjeldhal method, phosphorus content by spectrophotometry, calcium and potassium content by flame photometry, Fe and Zn contents using atomic absorption spectrophotometer.

Data were subjected to variance analysis (ANOVA) using SAS software (Statistical Analysis System) to compare the effect of pruning type (hedge or ball shape) on the total Chlorophyll amount and mineral status. Also, the effect of the side orientation of the tree (S/E and N/W), year of measurement and their interaction were checked.

Foliar analysis: Foliar analysis showed that nitrogen, phosphorus, potassium, calcium, zinc and iron contents were optimum for both types of pruning (control and hedging) throughout the whole period of the experiment, as compared to the standards of Chapman (1968). Nitrogen content of hedge-shaped trees varied between 2.48 and 2.52 % on the 8th and 10th year, respectively. As regard to the control trees, values varied from 2.43 to 2.50 %. All these values are optimum (Table 2). Indeed, a nitrogen content of 2.4 to 2.6 % in the leaf is considered as satisfactory in order to obtain a good yield with a good quality (Embleton et al., 1978). Koo et al. (1974) put in evidence in "Bearss" Citrus trees that the increase in the nitrogen content in the leaf enhances the fruits yield; they suggest a nitrogen content of 2.2 to 2.6 % in order to obtain an optimum production in the climatic conditions of Floride. As well, Jones and Creec (1970) reported that a nitrogen content ranging between 2.2 to 2.5 % should be maintained for an optimum yield. However, hedging had a significant effect on the carbon content as well as on the C/N ratio. This quotient increased for both types of pruning (control and treatment) between the 8th and the 10th year, with the highest value observed in the control at the 10th year with 7.6 (Table 2). This could be explained by the relative severe pruning whit the hedge shape in comparison to the ball shape, since the big twigs cut during hedging constitute the ripened wood which has more carbon than the young branches. This report is in agreement with the hypothesis reported by Loussert (1989). As well, Pittaway (2002) stated that a change in the tree architecture by the pruning or the tying up can affect the C/N ratio.

Potassium content varied from 0.9 to 1.02 % between the 8th and the 10th year for the treatment and between 0.8 to 1 for the control, respectively (Table 2). These values are optimum as compared to the standards established by Chapman (1969). Potassium has an essential role in the formation, growth and quality of fruits. Indeed, a correct nutrition of the Citrus orchard with potash improves the fructification yield, the fruit size and the organoleptic quality (taste, sweetness), and the colour (epidermis more intensively coloured) (Loussert, 1989).

Phosphorous content is optimum for the treatment (hedging) as well as for the control (ball shape), for the 8th and the 10th year (Table 2). However, statistical analysis showed a higher value for the treatment at the 10th year in comparison to the control. In spite of the low phosphorous outputs by the fruits, phosphorous remains an important mineral compound leaving in the complex process of mineral nutrition of Citrus (Loussert, 1989).

Treatment and control showed an optimum iron content at the 8th and the 10th year (Figure 4). Nevertheless, statistical analysis put in evidence a higher iron content for the treatment as compared to the control, which could be related to the chlorophyll content of the tree. Indeed, according to Hopkins (2003), an iron deficiency results in a decrease of chlorophyll content since iron intervenes in the biosynthesis of chlorophyll.

Hedging didn't show significant effect on the zinc and calcium contents of the tree. Values are optimum compared to the standards of Chapman (Table 2).

Leaf analysis put in evidence optimum contents for nitrogen, phosphorus, potassium, calcium, zinc and iron, for both types of pruning (treatment and control) all along the experiment, as compared to the standards of Chapman (1968). However, statistical analysis showed that iron content was superior in the treatment, which could affect positively the chlorophyll content of the tree as stated by Hopkins (2003). In this case, productivity will be enhanced as correlated to the chlorophyll content.

We thank member of arboriculture department of the “Institut National Agronomique” in Tunis for technical and scientific support. We thank members of “Office des Terres Domaniales” in Tunisia for their technical support.

Niklas K.J., 1988. The role of phyllotactic pattern as a "developmental constraint" on the interception of light by leaf surfaces. Evolution 42: 1-16.

Takenaka, A., 1994. Effects of leaf blade narrowness and petiole lenght on the light capture efficiency of a shoot. Ecological Research. 9, 109–114.