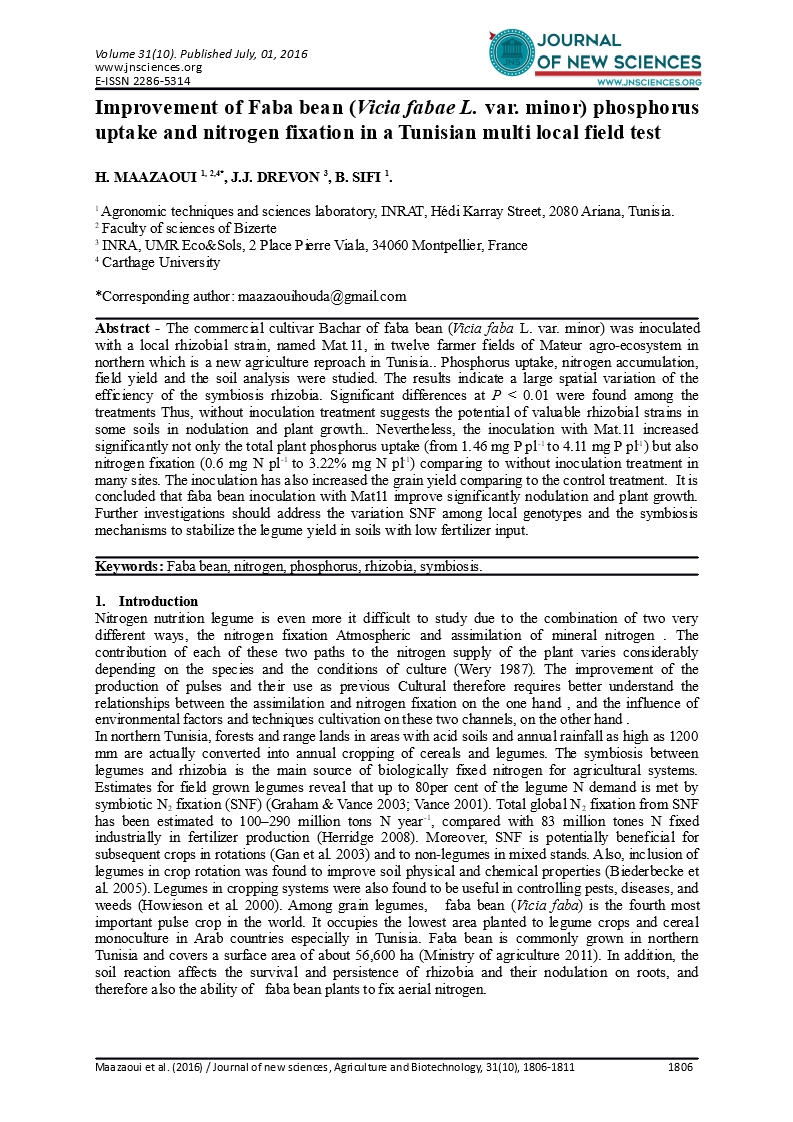 2 Faculty of sciences of Bizerte

Abstract - The commercial cultivar Bachar of faba bean (Vicia faba L. var. minor) was inoculated with a local rhizobial strain, named Mat.11, in twelve farmer fields of Mateur agro-ecosystem in northern which is a new agriculture reproach in Tunisia.. Phosphorus uptake, nitrogen accumulation, field yield and the soil analysis were studied. The results indicate a large spatial variation of the efficiency of the symbiosis rhizobia. Significant differences at P < 0.01 were found among the treatments Thus, without inoculation treatment suggests the potential of valuable rhizobial strains in some soils in nodulation and plant growth.. Nevertheless, the inoculation with Mat.11 increased significantly not only the total plant phosphorus uptake (from 1.46 mg P pl-1 to 4.11 mg P pl-1) but also nitrogen fixation (0.6 mg N pl-1 to 3.22% mg N pl-1) comparing to without inoculation treatment in many sites. The inoculation has also increased the grain yield comparing to the control treatment. It is concluded that faba bean inoculation with Mat11 improve significantly nodulation and plant growth. Further investigations should address the variation SNF among local genotypes and the symbiosis mechanisms to stabilize the legume yield in soils with low fertilizer input.

Nitrogen nutrition legume is even more it difficult to study due to the combination of two very different ways, the nitrogen fixation Atmospheric and assimilation of mineral nitrogen . The contribution of each of these two paths to the nitrogen supply of the plant varies considerably depending on the species and the conditions of culture (Wery 1987). The improvement of the production of pulses and their use as previous Cultural therefore requires better understand the relationships between the assimilation and nitrogen fixation on the one hand , and the influence of environmental factors and techniques cultivation on these two channels, on the other hand .

In northern Tunisia, forests and range lands in areas with acid soils and annual rainfall as high as 1200 mm are actually converted into annual cropping of cereals and legumes. The symbiosis between legumes and rhizobia is the main source of biologically fixed nitrogen for agricultural systems. Estimates for field grown legumes reveal that up to 80per cent of the legume N demand is met by symbiotic N2 fixation (SNF) (Graham & Vance 2003; Vance 2001). Total global N2 fixation from SNF has been estimated to 100–290 million tons N year-1, compared with 83 million tones N fixed industrially in fertilizer production (Herridge 2008). Moreover, SNF is potentially beneficial for subsequent crops in rotations (Gan et al. 2003) and to non-legumes in mixed stands. Also, inclusion of legumes in crop rotation was found to improve soil physical and chemical properties (Biederbecke et al. 2005). Legumes in cropping systems were also found to be useful in controlling pests, diseases, and weeds (Howieson et al. 2000). Among grain legumes, faba bean (Vicia faba) is the fourth most important pulse crop in the world. It occupies the lowest area planted to legume crops and cereal monoculture in Arab countries especially in Tunisia. Faba bean is commonly grown in northern Tunisia and covers a surface area of about 56,600 ha (Ministry of agriculture 2011). In addition, the soil reaction affects the survival and persistence of rhizobia and their nodulation on roots, and therefore also the ability of faba bean plants to fix aerial nitrogen.

Phosphorus is an essential element for the growth and development of plants Phosphorus deficiency has previously been reported to decrease nodule biomass more than host growth in soybean (Drevon & Hatwig 1997). However, in agricultural soils, the major portion of phosphorus is insoluble and therefore inaccessible to plants. In the calcareous soil of the Mediterranean basin, symbiotic nitrogen fixation (SNF) is frequently limited due to low P nutrient availability (Broughton et al. 2003). Phosphorous deficiency affects legumes more than other crops since SNF is an energetically expensive process requiring more inorganic P (Pi) than mineral nitrogen N (Vadez 2001). The P deficiency affects symbiotic fixation of N2 by limiting growth and survival of rhizobia (O’ Hara et al. 1988), nodule formation (Latati et al. 2014) and functioning (Tang et al. 2001a), and host plant growth (Tsvetkova and Gorgiev 2003; Latati et al. 2015). To cope with this low P availability we suggest that rhizobia inoculation could be an alternative practice that is widely adopted in tunisian agriculture so far. Thus, this multilocal field study aimed to highlight whether the rhizobia inoculation might alleviate the negative effect of P disponibility and improves plant growth and nutrition without additional nitrogen in northern Tunisian soils. The current study was designed to evaluate the response of faba bean to local rhizobial inoculation in terms of growth parameters, nitrogen fixation and yield in Mateur multi-location field tests.

The study was conducted during 2012-2013 in 12 farmer’s field sites with mean distances of 20 km between each site at Mateur, eastern north of Tunisia (Latitude: 37°02′N,
Longitude: 9°39′E and altitude 36 m). The mean annual temperature across the sites ranged between 10 and 26°C, and the mean annual rain fall ranged between 450 and 600 mm with maximum rainfall in the period between November and February. The lower valley of Medjerda’s Mediterranean climate is characterized by cold winters and dry summer. Soils of the experimental sites were characterized by a standard sampling of the top 30 cm using an auger at sowing stage. Table 1 shows physical and chemical soil properties for the experimental sites.

Two treatments, each on elementary plot of 100 m2, were compared in twelve field site: non inoculated (control) and inoculated with Mat strain (Mat.11) containing ten rows distant of 50 cm at a sowing density of 30 seeds per m and cultivated with Bachar variety selected by INRAT. In order to prepare fresh inoculum containing the same number of bacterial population for all rhizobia under study, a colony of Mateur strain was transferred into Erlenmeyer containing 100 mL of Yeast extract mannitol medium (Vincent 1970). Inoculated flasks were incubated at 27°C on a rotary shaker (150 rpm) for 72 hours. All bacterial suspensions were adjusted to about 108 CFU ml-¹.This suspension was used to inoculate the emerging seedlings using a watering can. Plants were irrigated by rainfall regime.

Ten plants were harvested at early flowering stage of each treatment at a depth of 20 cm and separated into shoot root and nodules.

For N determination, the sample was digested in hot concentrated H2SO4, as described by Kjeldahl. Soil P availability was determined after extraction in NaHCO3 (Olsen et al. 1954).

For P determination, the plants were performed according to standardized by AFNOR method (1969). The method is to pass in solution, the plant sample previously introduced in mini reactors and mineralized microwave in under the attack of concentrated nitric acid to pressures of the order of 110 bars and a temperature up to 180° C for 15 minutes. Quantification of anhydride phosphoric acid solution was carried pair reagent colorimetric assay vanadomolybdic revealing yellow units whose OD was read to 460 nm.

The high nitrogen levels were recorded in plants inoculated and fertilized with nitrogen while the lowest were recorded in control plants. The results allowed inferring that the inoculation and fertilization have a significant effect on the nitrogen accumulation. The phosphorus intake among inoculated plants has a significant effect on the nitrogen content .Compared with other Fabaceae, (Zamen-Alah 2007) confirmed the high sensitivity of the symbiotic nitrogen fixation in phosphate fertilization in bean. Moreover, some studies have shown that the metabolism of symbiotic nitrogen fixation requires more phosphorus than the growth of the aerial part (Gundwana et al. 1992). According to Bargaz et al. (2011), the efficiency of phosphorus use in nitrogen-fixing symbioses is closely linked to adequate distribution of P between the aerial parts and roots nodulated and between the nodules and roots.

In all control field mean yield varied among the site between 1300 kg/ha in A4 and 4300 kg/ha in A11 (Fig.3). The mean yield of faba bean inoculation with Mat.11 varied from 1600 kg/ha in A3 to 4300 kg/ha in A2, A8 and A7. Inoculation increased yield in all sites trials except A9, A5 and A11where the effect was negative. Several studies have reported a positive effect of inoculation leading to a significant improvement in seed yield (Karasu et al. 2009). Although it is a small contribution to crop production.

Strain used to inoculate a plot increased the total phosphorus and total nitrogen content of plants for the majority of the sites which results in improved yields. The amount of nitrogen fixed by symbiotic way remains very useful in maintaining and restoring soil fertility and in increased yield compared to non- inoculated cultures. It is also important to note that, in addition to the significant effect of inoculation on the yield of legumes, nitrogen application at planting is precious in agro systems. Thus further comparisons of faba bean sites among the diversity of the producers and fields of the region may be fruitful to assess the transferability of the rhizobial-inoculation. Further exploration of the interaction between the native rhizobia and localy-used cultivars faba bean may be recommended for optimization of this inoculant-biotechnology.

AcknowledgmentsThis work was supported by the Great Federative Project of Agropolis named FABATROPIMED under the reference ID 1001-009 and framework of Tunisia-French cooperation AUF-PCSI 63113PS012 for the scholar internship of Maazaoui Houda in Montpellier.