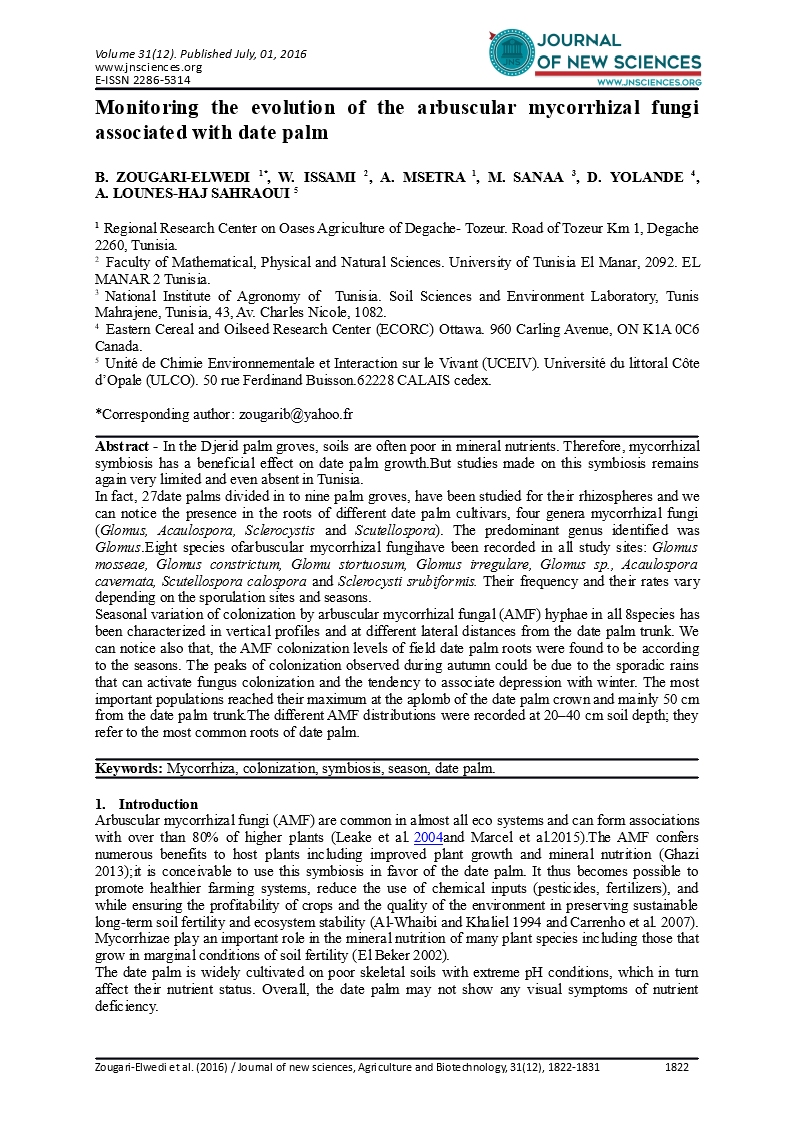 Abstract - In the Djerid palm groves, soils are often poor in mineral nutrients. Therefore, mycorrhizal symbiosis has a beneficial effect on date palm growth.But studies made on this symbiosis remains again very limited and even absent in Tunisia. In fact, 27date palms divided in to nine palm groves, have been studied for their rhizospheres and we can notice the presence in the roots of different date palm cultivars, four genera mycorrhizal fungi (Glomus, Acaulospora, Sclerocystis and Scutellospora). The predominant genus identified was Glomus.Eight species ofarbuscular mycorrhizal fungihave been recorded in all study sites: Glomus mosseae, Glomus constrictum, Glomu stortuosum, Glomus irregulare, Glomus sp., Acaulospora cavernata, Scutellospora calospora and Sclerocysti srubiformis. Their frequency and their rates vary depending on the sporulation sites and seasons. Seasonal variation of colonization by arbuscular mycorrhizal fungal (AMF) hyphae in all 8species has been characterized in vertical profiles and at different lateral distances from the date palm trunk. We can notice also that, the AMF colonization levels of field date palm roots were found to be according to the seasons. The peaks of colonization observed during autumn could be due to the sporadic rains that can activate fungus colonization and the tendency to associate depression with winter. The most important populations reached their maximum at the aplomb of the date palm crown and mainly 50 cm from the date palm trunk.The different AMF distributions were recorded at 20–40 cm soil depth; they refer to the most common roots of date palm.

Arbuscular mycorrhizal fungi (AMF) are common in almost all eco­ systems and can form associations with over than 80% of higher plants (Leake et al. 2004and Marcel et al.2015).The AMF confers numerous benefits to host plants including improved plant growth and mineral nutrition (Ghazi 2013);it is conceivable to use this symbiosis in favor of the date palm. It thus becomes possible to promote healthier farming systems, reduce the use of chemical inputs (pesticides, fertilizers), and while ensuring the profitability of crops and the quality of the environment in preserving sustainable long-term soil fertility and ecosystem stability (Al-Whaibi and Khaliel 1994 and Carrenho et al. 2007). Mycorrhizae play an important role in the mineral nutrition of many plant species including those that grow in marginal conditions of soil fertility (El Beker 2002).

The date palm is widely cultivated on poor skeletal soils with extreme pH conditions, which in turn affect their nutrient status. Overall, the date palm may not show any visual symptoms of nutrient deficiency.

However, despite the repeated experimental demonstration of the beneﬁts of using mycorrhizae in agriculture, this biotechnology remains badly known and under-utilized, except by the scientific community and a few leading-edge industries.

The material used in this workis the AM fungal biomass of the host plant: Phoenix dactilifera L.(Date palm).Within the framework of this present study and to verify the presence of mycorrhizal fungi, several experimental sites (Figure 1) were established in the Djerid region of Tunisia (Tozeur, Deguèhe, Nefta, Hazoua and Tamaghza).

Soil samplesfor each date palm were collected on site using a hand auger from 3differentdepths;0-20cm, 20-40cm and 40-60cmat different lateral distances from the date palm trunk, to develop and evaluate an effective sampling strategy. At each site,  varieties of dates (Deglet Nour, Aligue, Kinta, Hamraya and Halwaya) were taken. For spatial characterization and over time, only 3 sites were considered (Tozeur, Degache and Nefta) over a two-year period. The palm trees selected are grouped to remove as much variability as possible within the same site (irrigation, types of soil, influence of neighboring cultures if they exist).Date palm of uniform age (20-year old), size (4-5 m), palm number (150/date palm) and bunch number (10-12/ date palm); were selected to control the maximum variability factors. Samplings of soil were collected simultaneously.

Samples of soil and roots are taken on the same dates, on all selected date palms.

The root samples were first cleared and stained before microscopic observation. A staining technique based on methods developed by Kormanik et al. (1980) is used with a slight modification suited to date palm roots which are thick and woody.

A method described by McGonigle et al. (1990) is used to examine roots and quantify AM fungi, at defined intersections.

The statistical treatment of results is achieved through the STATISTICA Version 5 software, Beaux et al. (1991). The measures have been an analysis of variance of two factors by Fisher's F test to verify the equality of the means of hypothesis risk threshold of 5%. It is supplemented by multiple comparisons of means by the Newman Keuls test when the equality of averages hypothesis is rejected, according to Robert et al. (1980) and Dagnelie (1986).

Study on mycorhizal symbiosis with date palm must be accompanied by the determination of the main characteristics of the corresponding soil samples (Table 1). The soils studied at all depths were recovered for analysis (Pauwels et al., 1992) after sieving to 2 mm.

The analysis results shown that, the palm groves are generallycharacterized by notably low concentrations of certain minerals. Therefore the rhizosphere of date palm is considered poor for a cultivated soil

Inspired of root dissection and microscopic observationsof all the treated cultivars (Deglet Nour, Alig, Kinta and Hamraya)as well as those of the corresponding soils of the underground part of the date palm,the presence of endomycorrhizal fungi that live in association with the roots was revealed.

The presence of these endomycorrhizal fungi is illustrated by the root colonization by fungal hyphae (transport fungal structures), arbuscules (branched hyphal structures) and vesicles (lipid storage organs). These mycorrhizal structures were observed under an optical microscope (Figure2).

Mycorrhizal fungi are aerobic. Their adaptation to extreme temperatures; to pH and osmotic pressure of the medium is remarkable.For this distribution deep into the palm grove is found in the soil levels where the rootlets are the most abundant.This depth is between 20 and 40 cm (Figure 4).

The second level of sampling (20-40 cm) is the most recommended for the root removalbecause it is considered the most favorable area for the development of arbuscular mycorrhizal fungi.

Microscopic examination of date palm roots stained with trypan blue showed that in winter, the mycelial activity is low or absent.All that remains true place of mycorrhizal fungi survival (Figure5A).

In summer, the mycelial activity is important. The mycorrhizal fungus grows in soil as filaments; it develops its potential of mycelium. Furthermore, we note the presence of arbuscular, hyphae and a few vesicles in date palm roots (Figure5C).

At the beginning of autumn, the number of vesicles increase and the mycelial concentration process is initiated; this is related to the arrival of the first rains that caused a heat shock (Figure5D).

A few days after the heat shock,the mycelium is concentrated in the ground and having almost disappearedonly remain mycorrhizae and the cycle repeats.

The chosen date palms roots have mycorrhizal rates (hyphal. arbuscular and vesicular)low or none in winter. A significant increase of mycorrhizal hyphal rate approximately 1.2 times was observed going from spring to summer and summer to autumn (Figure 6).

The same result was observed for the mycorrhizal vesicles rate. Law increases of 5 and 4.9 times were recorded from spring to summer and summer to autumn.

The highest percentage of arbuscules was observed in summer (Figure6).

Root colonization of date palm was also evaluated using the following parameters; the average frequencies (F) and intensities of colonization (I) (Figure 7).

The results shown in details in figure 7 also verified the effect of the sampling time on the frequency and intensity of root colonization. They believe in a remarkable way from winter to autumn.

The frequency of spores is given by the average of the nine samples taken from each palm grove.The values variy with the seasons (Figure 8).

Analysis of arbuscular mycorrhizal fungal (AMF) spore communities found in the rhizosphere of date palm showed their frequency of occurrence vary depending on the season.

In Djerid region, mycorrhizal spore counts steadily increased from spring reaching a maximum value (460 spores/100g of soil) in autumn (rainy season). After November, spore abundance decreased in winter (320 spores/100g of soil). Spore counts were higher in autumn and winter than in spring and summer season. Thus, maximum abundance of AM fungi spores was recorded during the rainy season.

Extraction of spores from soil shows that there is a wide variety of mycorrhizal fungi species.

All morphological characteristics of spores described by Giovannetti and Gianinazzi-Pearson (1994) and Dalpe(1995)play an important role in the identification, description and classification of new arbuscular mycorrhizal fungal species.