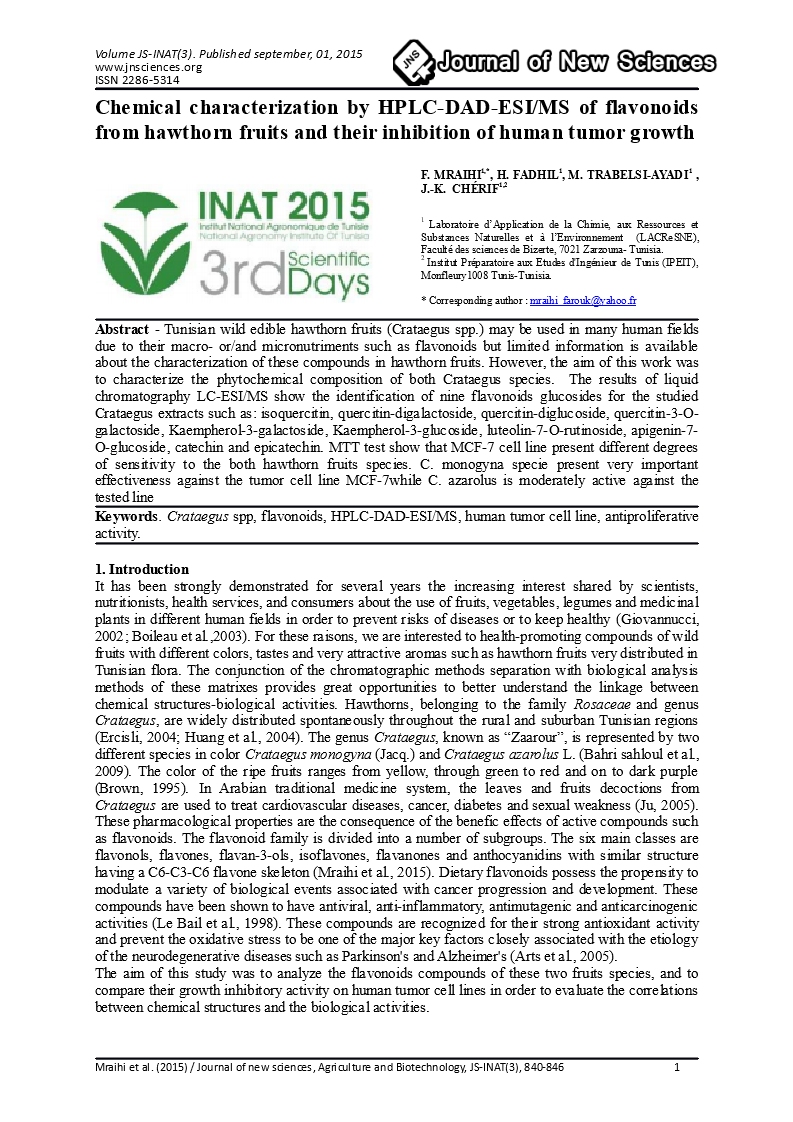 Abstract - Tunisian wild edible hawthorn fruits (Crataegus spp.) may be used in many human fields due to their macro- or/and micronutriments such as flavonoids but limited information is available about the characterization of these compounds in hawthorn fruits. However, the aim of this work was to characterize the phytochemical composition of both Crataegus species. The results of liquid chromatography LC-ESI/MS show the identification of nine flavonoids glucosides for the studied Crataegus extracts such as: isoquercitin, quercitin-digalactoside, quercitin-diglucoside, quercitin-3-O-galactoside, Kaempherol-3-galactoside, Kaempherol-3-glucoside, luteolin-7-O-rutinoside, apigenin-7-O-glucoside, catechin and epicatechin. MTT test show that MCF-7 cell line present different degrees of sensitivity to the both hawthorn fruits species. C. monogyna specie present very important effectiveness against the tumor cell line MCF-7while C. azarolus is moderately active against the tested line

It has been strongly demonstrated for several years the increasing interest shared by scientists, nutritionists, health services, and consumers about the use of fruits, vegetables, legumes and medicinal plants in different human fields in order to prevent risks of diseases or to keep healthy (Giovannucci, 2002; Boileau et al.,2003). For these raisons, we are interested to health-promoting compounds of wild fruits with different colors, tastes and very attractive aromas such as hawthorn fruits very distributed in Tunisian flora. The conjunction of the chromatographic methods separation with biological analysis methods of these matrixes provides great opportunities to better understand the linkage between chemical structures-biological activities. Hawthorns, belonging to the family Rosaceae and genus Crataegus, are widely distributed spontaneously throughout the rural and suburban Tunisian regions (Ercisli, 2004; Huang et al., 2004). The genus Crataegus, known as “Zaarour”, is represented by two different species in color Crataegus monogyna (Jacq.) and Crataegus azarolus L. (Bahri sahloul et al., 2009). The color of the ripe fruits ranges from yellow, through green to red and on to dark purple (Brown, 1995). In Arabian traditional medicine system, the leaves and fruits decoctions from Crataegus are used to treat cardiovascular diseases, cancer, diabetes and sexual weakness (Ju, 2005). These pharmacological properties are the consequence of the benefic effects of active compounds such as flavonoids. The flavonoid family is divided into a number of subgroups. The six main classes are flavonols, flavones, flavan-3-ols, isoflavones, flavanones and anthocyanidins with similar structure having a C6-C3-C6 flavone skeleton (Mraihi et al., 2015). Dietary flavonoids possess the propensity to modulate a variety of biological events associated with cancer progression and development. These compounds have been shown to have antiviral, anti-inflammatory, antimutagenic and anticarcinogenic activities (Le Bail et al., 1998). These compounds are recognized for their strong antioxidant activity and prevent the oxidative stress to be one of the major key factors closely associated with the etiology of the neurodegenerative diseases such as Parkinson's and Alzheimer's (Arts et al., 2005).

The aim of this study was to analyze the flavonoids compounds of these two fruits species, and to compare their growth inhibitory activity on human tumor cell lines in order to evaluate the correlations between chemical structures and the biological activities.

2.3. Preparation of the flavonoids extracts

The lyophilized fruits (2 g) of both Crataegus species were extracted three times by 15 mL of ethanol/acidified water HCl 1.5 N, during 30 min in an ultrasonic bath (FALC Instruments, Italy). The collected organic extracts were removed and the aqueous phases were fractionated with 3*100 mL of ethyl acetate. The gathered ethyl acetate phase was dried on Na2SO4, vacuum evaporated to dryness and re-dissolved in water and lyophilized again, respectively. Methanol extracts were filtered through a 0.45μm membrane filter for High Performance Liquid Chromatography (HPLC-DAD-MS) analysis. The DMSO extracts were kept for the antiproliferative assays (Figure1).

In order to confirm the identity of flavonoids compounds an HPLC with mass spectrometry detection Agilent 1100 Series liquid chromatography analysis, equipped with an API source and employing an ESI (electrospray ionization) and an Ultrabase C18 column (5 µm; 4.6 mm150 mm), was carried out. Mobile phase was ultrapure water (A), HPLC-grade acetonitrile (B), 1% formic acid (C) and aqueous formic acid acetonirtile (90:10) (D).

Anticancer activity assays require the measurement of surviving and/or proliferating human tumor cells. Our study has been conducted on human breast adenocarcinoma cell lines (MCF-7), supplied from the ATCC (American Type Culture Collection). Cells were grown in RPMI 1640 supplemented 5-10% fetal bovine serum, in a 6% CO2 atmosphere. The principle of this test consists to the conversion of MTT reagent into a purple colored formazan product at 570 nm by the viable cells with active metabolism (Mossmann., 1983).

Briefly, the cultures in 96-well plates were incubated with 200 μL of fresh supplemented medium and 50 μL of MTT (8 mg.mL-1 in PBS) incubated for 4 h at 37 ºC with humidified atmosphere containing 5% CO2. After centrifugation to carefully remove the medium and non metabolized MTT, 100 μL of DMSO were added to each well to solubilize the MTT formazan produced by the cultured cells. After shaking for 30 min at room temperature, to ensure that all crystals were dissolved, the plates were read with a Multiskan MCC/340P spectrophotometer at the wavelengths 570 nm. The data are analyzed by plotting cell number versus absorbance, allowing quantitation of changes in cell proliferation. The rate of tetrazolium reduction is proportional to the rate of cell proliferation (Saravanan et al., 2003).

The main individual flavonoids compounds of both hawthorn species were identified by their UV spectra recorded with a diode array detector and by electrospray ionization mass spectrometry with an ion trap analyzer ESI/MS.

MS spectra of peak 2 show the losses of rhamnosyl hexosyl (-146-162 uma) to obtain an aglycon at m/z 287 corresponding to luteolin. This disaccharide should be either a rutinoside = Glc-Rha (m/z 308) or a Gal-Rha (m/z 308) linked to the luteolin aglycone. For Peak 6, it was noted the losses of a hexosyl (glucose= -162 uma) to give an aglycon at m/z 271 corresponding to the apeginin. Therefore, the peaks 2 and 6 were assigned to luteolin-7- O-rutinoside and apigenin-7-O-glucoside, respectively.

The pseudo-molecular ions [M-H]+ of the identified flavonols compounds (Peaks 3, 4, 5, 7, 8 and 9) are detected at m/z 627, 449 and 465, respectively. Major diagnostic fragments of flavonols aglycon identification are those involving the cleavage of two C-C bonds of the C-ring giving two fragment ions which provide information about the number and type of substituent. Therefore, the product ions, [aglycon_H]+, were detected at m/z 303 and 287.Peaks 3 and 4 present the same pseudo-molecular ion [M-H]+ at m/z 627 but differed by retention times (17.9 and 18.7 min). These peaks correspond to quercetin-3,7-O-digalactoside and quercetin-3,7-O-diglucoside, respectively (Figure4).

Peaks 5 and 7 also have identical molecular ions at m/z 449. Thus, based on their fragmentation pattern and relative fragment ion abundances, these peaks were tentatively assigned as quercetin-3-O-galactoside and quercetin-3-O-glucoside, respectively (Figure5).

Similar reasoning was applied for the assignment of peaks 8 and 9, they present the same [M-H]+ at m/z 465) and with typical MS2 spectra but with different characteristics UV and retention times (31.6 and 34.4 min). These peaks were associated to kaempherol-3-O-galactoside and kaempherol-3-O-glucoside (Figure6)

After measuring absorbance at wavelength of 570 nm, the growth of human tumor cell lines MCF-7 is expressed as the concentrations that caused 50% of cell growth inhibition (GI50) obtained from the trace of percentages cell viability versus different concentrations of fruits extracts. The cell line tested shows differing degrees of sensitivity to the different extracts of both Crataegus species (Figure7).

The obtained results of C. monogyna samples were comparable to the same species cultivated in Portugal (Rodriguez et al., 2013). The difference action of fruits extracts on the tumor cell line MCF-7 may be due to the different chemical structure. Since, it was shown different structure in the position, number and substitution of the hydroxyl of the A and B rings in the identified flavonoids that may be important factors affecting cytotoxic and/or antiproliferative activities of these tumor cells lines.

3. 3. Relationship between structure and activity

Flavonoids are generally nontoxic and manifest a diverse range of beneficial biological activities. The role of dietary flavonoids in cancer prevention is widely discussed. As for any structure-activity relationship, previous studies suggest that the position, number and substitution of the hydroxyl of the A and B rings may be important factors affecting cytotoxic and/or antiproliferative activities of the flavonoids (Sanchez et al., 2001; Kawaii et al., 1999). With regard to the chemical structure of the identified flavonoids compounds from hawthorn fruits, we show that the identified compounds belong to the flavones and flavonols subclass (Figure 8).

Both flavones and flavonols basic skeletons, present a double C2-C3 bond in polyhydroxylated flavonoids and the number of substituents on the A and B rings and their nature (free hydroxyls or methylated). They are flat structures with a characteristic 3-hydroxyl substituent. Another structural element that may influence antiproliferative activity is the number and position of the substituents in the flavonoid base skeleton. Luteolin and apeginin (flavone) and quercetin, kaempherol (flavonol) have a catechol structure (O-hydroxy) in its B ring the presence of a new hydroxyl in this ring leads to these structures a strong antiproliferative effect (Agullo et al., 1996).

The results of this investigation have shown that wild edible hawthorn fruits contain substantial amounts of flavonoids and that these compounds are widely varying in flavonols and flavones backbone, monoglycosylation, and diglycosylation. Totally, nine flavonoids are identified; the most predominant flavonoids in the analyzed samples were quercitin 3-O-galactoside and Kaempherol-3-O-glucoside. Based on the diversity of chemical structures identified, it could be concluded that Tunisian Crataegus fruits could be introduced into the market to deliver significant amounts of flavonoids compounds with potential health promoting properties into the human diet. Also they could be introduced in a new field of interest for pharmaceutical industry, since it was established, in this study, an important inhibitory growth human tumor MCF-7 cell line of hawthorn extracts.