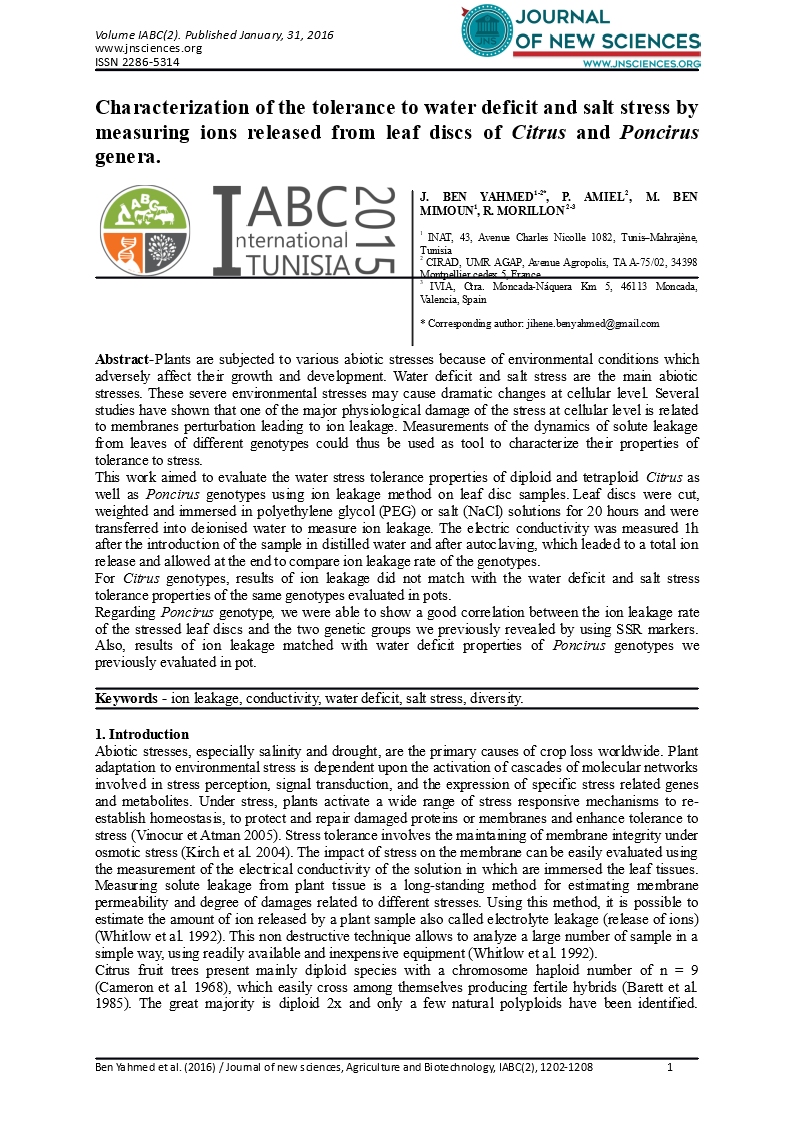 Abstract-Plants are subjected to various abiotic stresses because of environmental conditions which adversely affect their growth and development. Water deficit and salt stress are the main abiotic stresses. These severe environmental stresses may cause dramatic changes at cellular level. Several studies have shown that one of the major physiological damage of the stress at cellular level is related to membranes perturbation leading to ion leakage. Measurements of the dynamics of solute leakage from leaves of different genotypes could thus be used as tool to characterize their properties of tolerance to stress. This work aimed to evaluate the water stress tolerance properties of diploid and tetraploid Citrus as well as Poncirus genotypes using ion leakage method on leaf disc samples. Leaf discs were cut, weighted and immersed in polyethylene glycol (PEG) or salt (NaCl) solutions for 20 hours and were transferred into deionised water to measure ion leakage. The electric conductivity was measured 1h after the introduction of the sample in distilled water and after autoclaving, which leaded to a total ion release and allowed at the end to compare ion leakage rate of the genotypes. For Citrus genotypes, results of ion leakage did not match with the water deficit and salt stress tolerance properties of the same genotypes evaluated in pots. Regarding Poncirus genotype, we were able to show a good correlation between the ion leakage rate of the stressed leaf discs and the two genetic groups we previously revealed by using SSR markers. Also, results of ion leakage matched with water deficit properties of Poncirus genotypes we previously evaluated in pot.

Abiotic stresses, especially salinity and drought, are the primary causes of crop loss worldwide. Plant adaptation to environmental stress is dependent upon the activation of cascades of molecular networks involved in stress perception, signal transduction, and the expression of specific stress related genes and metabolites. Under stress, plants activate a wide range of stress responsive mechanisms to re-establish homeostasis, to protect and repair damaged proteins or membranes and enhance tolerance to stress (Vinocur et Atman 2005). Stress tolerance involves the maintaining of membrane integrity under osmotic stress (Kirch et al. 2004). The impact of stress on the membrane can be easily evaluated using the measurement of the electrical conductivity of the solution in which are immersed the leaf tissues. Measuring solute leakage from plant tissue is a long-standing method for estimating membrane permeability and degree of damages related to different stresses. Using this method, it is possible to estimate the amount of ion released by a plant sample also called electrolyte leakage (release of ions) (Whitlow et al. 1992). This non destructive technique allows to analyze a large number of sample in a simple way, using readily available and inexpensive equipment (Whitlow et al. 1992).

Plant materials were propagated by sowing seeds in a neutral substrate (perlite). Seedlings were transplanted 4 months after germination into 3.5 L pots in a mixture of sand, turf and peat (1:1:1), and regular fertilization was applied according to Allario et al. (2011). The ploidy status of seedlings was confirmed by flow cytometry (Partec I) according to Froelicher et al. (2007). Plants were grown for one year in green house under natural photoperiod conditions 15 / 9 hours (day / night) and temperature 26/20°C. Irrigation was performed twice a week.

2.2 Measurement of electrolyte leakage at the cellular level

Leaves of each genotype were harvested and placed on ice until the beginning of the treatment (<1h). Leaf discs were cut and plunged into 2 mL of a 300 mM NaCl solution or a 25 mM of PEG solution corresponding respectively to an osmotic pressure of -1.38MPa and -0.92MPa (measured by an osmometer Vescor 5500).For each treatment, 10 reps of two discs were used for the experimentation. Each 2 discs were taken from the same leaf. The discs were weighed (p) and placed in the solutions for 20h at ambient temperature (26°C).After the stress period, the discs were rinsed with deionized water, transferred into new tubes containing 20 mL of deionized water. The first conductivity measurement was taken immediately after the transfer of the discs in the tubes (T0) using a conductivity meter. After 1 hour (T1), the solution was homogenized rapidly with a vortex and the conductivity was measured. Finally, the tubes were autoclaved for 20 minutes at 121°C; the last measurement is performed after cooling (25°C) and homogenization. This measure corresponds to the maximum ion release (Tf).The release of ions E is calculated using the following equation:

This gives the percentage of ions released the first hour after rehydration based on the total ion release on the weight of the discs (p).

Plus software for Windows (version 4.1; MicrosoftCorp., Redmond, WA, USA) was used for statistical analysis and SigmaPlot (Systat Software, San Jose, CA) software for the figures. The data are expressed as means ± S.E. An ANOVA was used to detect the differences between genotypes.

3.1 Characterization of ion leakage of leaf discs of Citrus and Poncirus genotypes

Leaf discs of Citrus and Poncirus genotypes were subjected to salt stress using NaCl solution. Percentage of ion released from the leaf discs are presented in Figure 1.

The lowest rates were observed for 2x Poncirus x Cleopatra hybrid (0.259 % µS/mg), 2x Pomeroy (0.294 % µS/mg) and 2x Citrumelo (0.310 % µS/mg) and 4x Carrizo Citrange (0.328 % µS/mg). Results in Pomeroy and Carrizo Citrange are puzzling since these genotypes are known to be quite salt stress sensitive in the field. However, the stress we performed was applied on leaf discs do not take into account mechanisms characterizing ion absorption regulation (root exclusion) at root level. Indeed, when investigating accessions known to be tolerant to salt stress as rootstock, we showed that twigs of the same genotypes immerse in salt solution presented sensitivity phenotype (Ben Yahmed et al. 2015c). Conversely, seedlings of sensitive genotypes were shown to be tolerant suggesting that ion exclusion mechanisms may exist in leaf favoring the adaptation (Ben Yahmed et al. 2015b). To end the ability of genotypes to tolerate salt stress may be related to their capacity to reduce central metabolic processes related to carbon utilization and toxic ion exclusion (Hussain et al. 2012)

Leaf discs of Citrus and Poncirus genotypes were subjected to water deficit using PEG solution. Percentages of ion released for each genotype are presented in Figure 2. The genotypes that released the most of ions were 2x Pomeroy (0.048 %µS/mg) and 4x Cleopatra mandarin (0.044 %µS/mg), 2x Carrizo Citrange (0.048 %µS/mg) 4x Carrizo Citrange (0.032 %µS/mg). The 4x Rangpur lime was the genotype that showed the fewer ion release on leaf discs. When grafted Rangpur lime is known to be highly tolerant to water deficit (Allario et al. 2013). However, the tolerance of Rangpur lime seedlings to water deficit is probably much lower as proposed by Oliveria et al. (2015). Thus, as hypothesized for salt stress, specific mechanisms in leaves of some genotypes are probably involved which lead to limit ion leakage when discs are immersed in PEG solution.

We observed also that the 4x released fewer ions than the respective 2x except for Cleopatra mandarin x Poncirus, Cleopatra mandarin and Carrizo Citrange (Figure 2). In fact, when subjected to a water deficit, preliminary results suggest that 4x are more tolerant than their respective 2x cultivars (Oliveria et al. 2015). Indeed, because of the high differentiation that occurs at root and leaf levels between 2x and 4x (Mouhaya et al. 2010; Allario et al. 2011), it is possible that specific mechanism such as detoxification may act in 4x and favor their adaption and limiting ion leakage in leaf discs (Zhang et al. 2010; Wang et al. 2013). Moreover, the higher drought tolerance could be related to the greater osmotic adjustment, which was reflected by smaller reductions in leaf relative water content and in higher turgor potentials and leaf gas exchange (Rodríguez-Gamir et al. 2010)

3.3 Correlation between ion release under salt stress and genetic diversity

The impact of the salt stress on leaf discs of different Poncirus genotypes is shown on Figure 3. Poncirus Pomeroy 2x and Town were the genotypes that released the lowest percentage of ions (0.02%µS/mg). The 4x Pomeroy (ICVN 0110081) showed high ions released than respective 2x (Figure 3). Saleh et al. (2008) showed that leaf fall was observed only for 2x Poncirus plants as well as chlorosis symptoms and 4x Poncirus were more tolerant to salt stress than 2x.

Despite the fact that Poncirusgenotype was known to be one of the most salt stress sensitive rootstocks (Saleh et al. 2008, Hussain et al, 2012), the response to salt stress on leaf discs was not the same for all studied genotypes. The percentages of ion release in discs ranged from 0.2% to 0.8%. The genetic diversity in Poncirus genotypes was analyzed using 17 SSR markers and two distinct genetic groups were identified (Ben Yahmed et al. 2015a). In that study, a water deficit experiment was performed on genotypes representative of both genetic groups. A good correlation was observed regarding water deficit traits and both genetic diversity. Ours experiments on leaf discs revealed the existence of a correlation between the ion release percentage and both genetic groups. Interestingly, the genotypes that released fewer ions were mostly part of group 1 unlike genotypes of genetic group 2 which displayed a higher percentage of ions release.

3.4 Correlation between ion release under water deficit and genetic diversity

Leaf discs of the different Poncirus were subjected to a water stress when immersed in PEG solution. Results are presented in Figure 4. We can notice that the ions release was much lower for the PEG stress compared with salt stress (about 4.5 times less). Poncirus Commun, Town and Feuilles moyenne du Japon released ions about 3 fold more than (2x) Pomeroy, S.E.A.B, Holansis, Rubidoux and Flying Dragon (Figure 4).

When grafted, Poncirus rootstocks are known to be sensitive to drought (Wu et al. 2007). Ben Yahmed et al. (2015a) showed that Poncirus seedlings can support water limitation for weeks and remain alive, and are then tolerant to drought. However, the correlation between water deficit tolerance on leaf discs and seedlings is difficult to establish. In fact, the water deficit tolerance of a seedlings or a grafted tree depends mainly on the total leaf area, the capacity to regulate water loss through stomata and to root architecture (Ben Yahmed et al. 2015a). Also, it is known that genotypes that present roots capable of growing deeply in the soil are usually much more tolerant to drought, since they are less affected by soil drying. Nevertheless, we observed that the Poncirus group 1 released fewer ions than group 2. Ben Yahmed et al. (2015a) observed that group 2 genotypes were more tolerant to water stress than those of genetic group 1. However we cannot exclude that osmotic adjustment may occur in seeding subjected to water deficit which may have not happened when discs were plunged in PEG.

Investigations of ion leakage induced by water stress in leaf discs of 2x and 4x Citrus seedlings did not match with results of seedlings investigated in pots. However, the method was quite reliable when analyzing Poncirus genotypes. It was indeed possible to correlate our results with those obtained using SSR markers to structure the diversity within Poncirus genus. Genotypes that released fewer ions belonged to the group 1 while the second genetic group released much more ions.

Jihene Ben Yahmed was supported by a doctoral degree scholarship from the Government of Tunisia, Ministry of Higher Education and Scientific Research of Tunisia. This work was funded by a French CTPS project “AAP12n°3/C2012-01”.