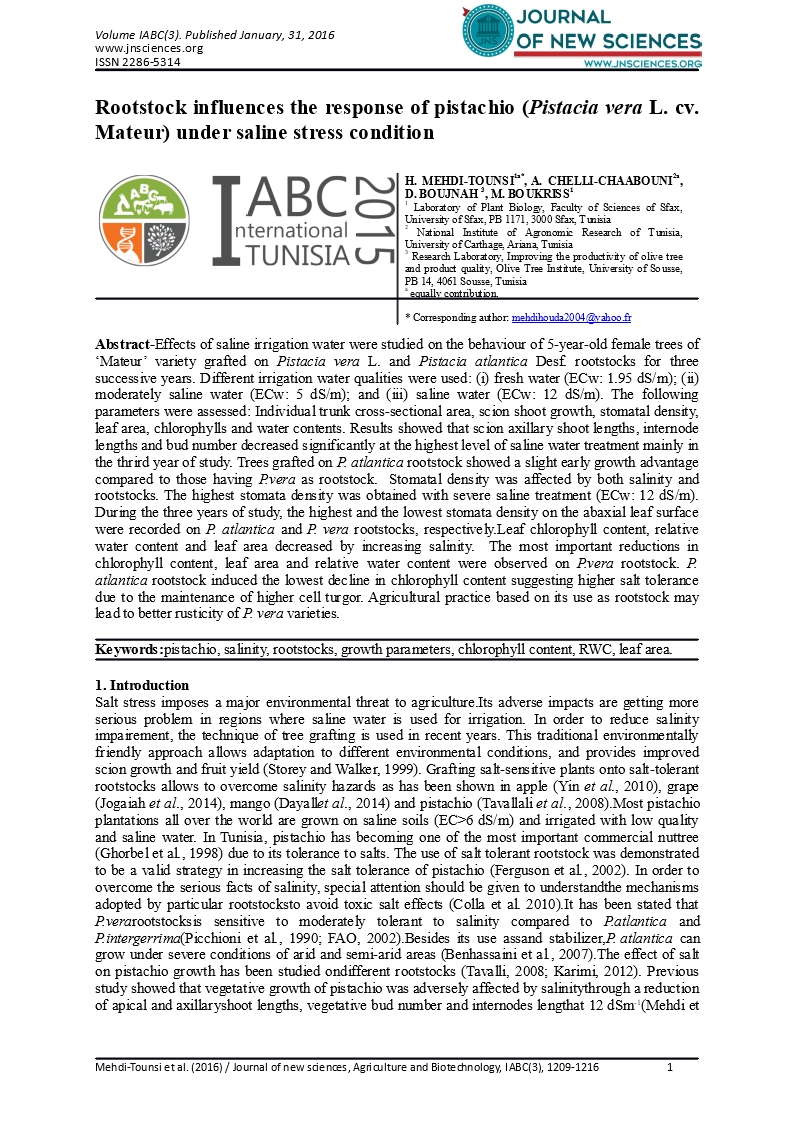 Salt stress imposes a major environmental threat to agriculture.Its adverse impacts are getting more serious problem in regions where saline water is used for irrigation. In order to reduce salinity impairement, the technique of tree grafting is used in recent years. This traditional environmentally friendly approach allows adaptation to different environmental conditions, and provides improved scion growth and fruit yield (Storey and Walker, 1999). Grafting salt-sensitive plants onto salt-tolerant rootstocks allows to overcome salinity hazards as has been shown in apple (Yin et al., 2010), grape (Jogaiah et al., 2014), mango (Dayallet al., 2014) and pistachio (Tavallali et al., 2008).Most pistachio plantations all over the world are grown on saline soils (EC>6 dS/m) and irrigated with low quality and saline water. In Tunisia, pistachio has becoming one of the most important commercial nuttree (Ghorbel et al., 1998) due to its tolerance to salts. The use of salt tolerant rootstock was demonstrated to be a valid strategy in increasing the salt tolerance of pistachio (Ferguson et al., 2002). In order to overcome the serious facts of salinity, special attention should be given to understandthe mechanisms adopted by particular rootstocksto avoid toxic salt effects (Colla et al. 2010).It has been stated that P.verarootstocksis sensitive to moderately tolerant to salinity compared to P.atlantica and P.intergerrima(Picchioni et al., 1990; FAO, 2002).Besides its use assand stabilizer,P. atlantica can grow under severe conditions of arid and semi-arid areas (Benhassaini et al., 2007).The effect of salt on pistachio growth has been studied ondifferent rootstocks (Tavalli, 2008; Karimi, 2012). Previous study showed that vegetative growth of pistachio was adversely affected by salinitythrough a reduction of apical and axillaryshoot lengths, vegetative bud number and internodes lengthat 12 dSm-1(Mehdi et al., 2010). The reduction of vegetative growthby salt may be a result of a combination of osmotic and specific Na and Cl ion effects (Correia et al., 2010).Under salt conditions, the plant water uptake decreases due to the reduction of water potential and the toxic effect of specific ions at the cellular level (Ebert, 2000). Salinity tolerance mechanisms in plants act to either withstand cellular dehydration or minimize water loss to maintain a suitable water status for development.In the same way, salinity of irrigation water induces the partial or total closure of stomata in order to preserve the plant water status. This phenomenon is always accompanied by a decrease in stomata density and guard cell length to limitates leaf gas exchanges.It causes a reduction in stomatal conductance, photosynthesis and transpiration (Lefi and Ben Hamid, 2014). Ferguson et al. (2002) studied the response of P.atlantica,P. integerrima and UCB-1 rootstocks to salinity stress.They reported that increasing salinity provoked a reduction in leaf area that was more pronounced onP. integerrima rootstock.This paper describes the effects of saline irrigation water and rootstock(P. vera and P. atlantica) on leaf growth parameters of Mateur pistachio variety.For this purpose, leaf area, stomatal density, leaf water and chlorophyll contents were followed during three consecutive years under different quality of irrigation water.

Tree growth was followed by the measurements of scion axillary shoot lengths, internode lengths and bud number as well as rootstock trunk cross-sectional area (TCSA) at the end of each year of experimentation.

The relative water content (RWC) in the leaves was measured as follows: leaf sample was weighed to determine its fresh weight (FW) and then placed in distilled water for 24 h until full turgor.After this period, the leaf was removed from water, wiped with the filter paper and weighed (TW) before being placed in an oven at 80°C during 48 h.Samples were then weighed again to determine the dry weight (DW).RWC was determined according to Clarke and McCaig (1982) equation:

All data were subjected to one way ANOVA analyses using SPSS software of Windows. Mean differences were determined by Duncan’s multiple range tests at p≤0.05. The comparisons in terms of the growth and chlorophyll content data were performed between all treatments and rootstocks.

Table 3 represents values of all growth parameters measured during the whole period of study.

Growth reduction is a mechanism necessary for the survival of plants exposed to abiotic stress (Zhu et al., 2008). In this study, shoot growth of trees grafted on P. atlantica appeared less affected by water salinity than those growing on P. vera rootstock. These findings confirm the best performance of P. atlantica rootstock under saline conditions (Ferguson et al., 2002).

Stomata and leaf area are characters which influence transpiration rate, stomatal conductance and photosynthesis to a great extent and play an important role on growth and development of trees.

It was demonstrate that low stomatal density may be beneficial for tolerant pistachio rootstock prescribed to be used in marginal environments in terms of salinity (Ferguson et al., 2002).Many studies have shown that decreasing stomatal density and lowering stomata movement were controlled by an hormonal message from the roots, the abscisic acid (Zorb et al., 2013). This stomata density reduction may induce a decrease in leaf transpiration and consequently inhibiting photosynthesis (Wilkinson and Davies, 2002) and leaf expansion (Munns et al., 2006). In this study, trees grafted on P. atlantica exhibited greater stomatal density reductions than ones budded on P.vera, reflecting its higher eco-physiological adaptation to salinity. That joined the literature to explain the agricultural practice based on the use of P. atlantica as a rootstock of P. vera for a better rusticity to the abiotic constraints as salinity. Ben Hamed and Lefi (2015) allotted the good performance of pistachio trees grafted on P. atlantica rootstock to the adaptive ecophysiological characteristics related particularly to root growth.

Pistachio trees treated with fresh water (C) maintained high RWC on both P. vera and P. atlantica rootstocks. Under salt stress (T1 and T2), the RWC was significantly reduced, especially for trees budded on P. vera at moderately and saline water treatment all over the experimental period. In fact, RWC has been as lower as the salt stress became more severe (Fig. 1). RWC reduction is due to an increase in osmolarity in the cytoplasm causing osmotic stress and cellular dehydration.

During the two first years of experiments, trees grafted on P.atlantica showed high RWC values for all salinity treatments (Fig. 1). Neverthless, these values decreased only by salinity up to 12 dSm-1 in the last trial year. It can be related to the wild nature of P.atlantica rootstock. In term of cell turgor, Lefi and Ben hamed (2014) reported that under severe salinity (EC=12dSm-1), the water status of studied pistachio trees was widely affected in P. vera, whereras, P. atlantica maintained high leaf turgor compared to control. A more favorable hydration status in P.atlantica revealed a limiting transpiration mechanism (Porcelet al., 2012) due to osmotic adjustment, which maintains the osmotic balance between the cytoplasm and vacuole preventing the efflux of water from the cytoplasm (Ben Ahmed et al., 2008).

All values represent average per plant±standard deviation (n≥22). Values on the same column having a same letter are not significantly different at p≤0.05.

Mean values of data showed that trees grafted on P.vera had the maximum reduction of these three photosynthesis pigments under salinity stress comparing to onces budded on P.atlantica (Fig. 2). Our results were in agreement with Ferguson et al. (2002) results who reported that chlorophyll contents decreased with increasing salinity in ‘Kerman’ cultivar grafted on P.atlantica, P.integerrima and UCB1 rootstocks and these rootstocks can be tolerant to salinity by saving chlorophyll contents and photosynthetic efficiency of leaf at higher levels of salinity.

This study has highlighted the relatively salt tolerance of pistachio trees grafted on two local rootstocks P.vera and P.atlantica. Based on the criteria used for judging salt tolerance inthe present study, P.atlantica rootstocks could be considered as the most salt tolerant rootstockand would be well adapted to arid regions of Tunisia wherethe water may be moderately saline. The higher salt tolerance of this rootstock could clearly be due to higher ability tolimit transpiration by reduction of leaf area and stomata density, greater potential to maintain high cell turgor and finally less reduction in shoot length and trunk diameter.

This study was financially supported by grants from both the Tunisian Ministry of higher Education and Research and the Institution of Agricultural Research and Higher Education. The authors would to thank Dr Anissa Chaari for supporting manuscript revision fees, Dr. Kamel Gargouri for providing laboratory access and his technical advices and Mr. Nabil Soua for his technical assistance.

Ghorbel A, Ben Salem-Fnayou A, Chatibi M, Twey A (1998) Genetic resources of Pistacia in Tunisia. Toward a comprehensive documentation and use of Pistacia genetic diversity in central and west Asia, North Africa and Europe. In: Padulosi S, Hadj Hassan A. eds. Report of the IPGRI workshop, 14-17 December 1998, Irbid Jordan.

Karimi HR (2012) Evaluation of the Behavior of Native Iranian Pistachio Species as Rootstocks. Journal of Nuts 3(3):41-46