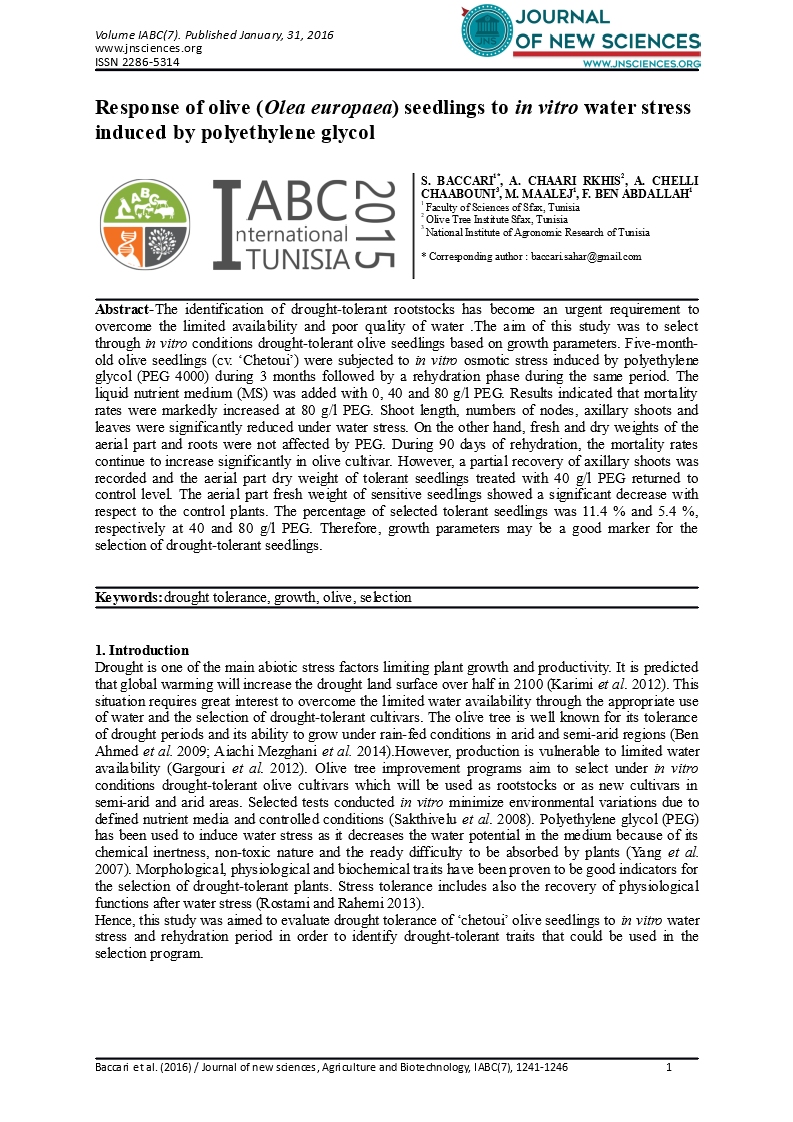 1 Faculty of Sciences of Sfax, Tunisia

Abstract-The identification of drought-tolerant rootstocks has become an urgent requirement to overcome the limited availability and poor quality of water .The aim of this study was to select through in vitro conditions drought-tolerant olive seedlings based on growth parameters. Five-month-old olive seedlings (cv. ‘Chetoui’) were subjected to in vitro osmotic stress induced by polyethylene glycol (PEG 4000) during 3 months followed by a rehydration phase during the same period. The liquid nutrient medium (MS) was added with 0, 40 and 80 g/l PEG. Results indicated that mortality rates were markedly increased at 80 g/l PEG. Shoot length, numbers of nodes, axillary shoots and leaves were significantly reduced under water stress. On the other hand, fresh and dry weights of the aerial part and roots were not affected by PEG. During 90 days of rehydration, the mortality rates continue to increase significantly in olive cultivar. However, a partial recovery of axillary shoots was recorded and the aerial part dry weight of tolerant seedlings treated with 40 g/l PEG returned to control level. The aerial part fresh weight of sensitive seedlings showed a significant decrease with respect to the control plants. The percentage of selected tolerant seedlings was 11.4 % and 5.4 %, respectively at 40 and 80 g/l PEG. Therefore, growth parameters may be a good marker for the selection of drought-tolerant seedlings.

Drought is one of the main abiotic stress factors limiting plant growth and productivity. It is predicted that global warming will increase the drought land surface over half in 2100 (Karimi et al. 2012). This situation requires great interest to overcome the limited water availability through the appropriate use of water and the selection of drought-tolerant cultivars. The olive tree is well known for its tolerance of drought periods and its ability to grow under rain-fed conditions in arid and semi-arid regions (Ben Ahmed et al. 2009; Aiachi Mezghani et al. 2014).However, production is vulnerable to limited water availability (Gargouri et al. 2012). Olive tree improvement programs aim to select under in vitro conditions drought-tolerant olive cultivars which will be used as rootstocks or as new cultivars in semi-arid and arid areas. Selected tests conducted in vitro minimize environmental variations due to defined nutrient media and controlled conditions (Sakthivelu et al. 2008). Polyethylene glycol (PEG) has been used to induce water stress as it decreases the water potential in the medium because of its chemical inertness, non-toxic nature and the ready difficulty to be absorbed by plants (Yang et al. 2007). Morphological, physiological and biochemical traits have been proven to be good indicators for the selection of drought-tolerant plants. Stress tolerance includes also the recovery of physiological functions after water stress (Rostami and Rahemi 2013).

Hence, this study was aimed to evaluate drought tolerance of ‘chetoui’ olive seedlings to in vitro water stress and rehydration period in order to identify drought-tolerant traits that could be used in the selection program.

Olive seeds were harvested from ‘Chetoui’ olive variety (O. europaea L.) in the orchards of the experimental station of the Olive Tree Institute, situated at 26 km in the North of Sfax (Tunisian South East area). The seedlings obtained from in vitro germination were cultivated for 5 months on a MS/2 medium (Murashige and Skoog 1962) supplemented with 30 g l-1 sucrose. The pH of the medium was adjusted to 5.8 before autoclaving at 120 ◦C for 20 min. Cultures were maintained at a temperature of 24 ± 2 °C and a photoperiod of 16 h. Luminosity was provided by cool white lamps (Philips TLD 58 w/830). Light is maintained at an average intensity of 2500 Lux (33.75 µmol m– 2 s– 1).

Polyethylene glycol (PEG 4000) was added to the MS/2 medium at different concentrations (0 g l-1, 40 g l-1 and 80 g l-1). Each PEG concentration was gradually achieved by steps of 20 g l-1 to avoid osmotic shock. The experiments were conducted during 3 months followed by rehydration during the same period. Seedlings were arranged in completely randomized design with four replicates of 20 plants per treatment.

The mortality rates were calculated monthly during the experimental period using the following equation: Number of the dead seedlings × 100 / number of total seedlings.

The mortality rates were significantly increased in olive seedlings (16.3 %) at 80 g/l PEG, with respect to the control plants (Figure 1 A).

Water stress results in damage and death of plants. It also causes the increase of toxicity symptom severity such as necrosis and leaf drop leading to plant death. During the 90 days of rehydration, the mortality rates continue to increase significantly. Indeed, Bajji et al. (2009) suggested that rehydration is considered as a second stressful condition after water stress. They reported that the electrolyte leakage increased during the rehydration period, which reflects the damage of the cell membrane stability. The disruption of membrane integrity could be the cause of plant mortality after rehydration. At the end of the experiment, the mortality rates observed were 31.5 % and 41.3 %, respectively at 40 and 80 g/l PEG.

Growth parameters could be used as criteria to select for drought tolerance (Almaghrabi, 2012). PEG treatment induced a significant reduction of growth parameters (shoot length, number of nodes, leaves and axillary shoots), with respect to the control plants (Table 1 and figure 2).

The shoot length and the number of nodes decreased by 13.7 % and 20.0 %, respectively at 80 g/l PEG. The significant effect of PEG treatment on number of axillary shoots was observed at the end of the experimental period. The decrease was 47.1 % and 61.4%, respectively at 40 and 80 g/l PEG. The decrease in leaves number occurred after 60 days of water stress for both PEG treatments. At the end of the experiment, this decrease was 36.7 % at 80 g/l PEG, compared to the control plants. Limitation of growth is a general response to water stress (Brito et al. 2003; Karimi et al. 2012). The decrease of the vegetative growth could be explained by the fact that the polyethylene glycol acts by increasing the osmotic pressure in the medium, which prevents the absorption of water by roots system (Tazi et al. 2003).On the other hand, fresh and dry weights of seedlings were not affected by PEG treatments. The decrease of growth parameters in 'Chetoui' plants seems to be controlled. It reached a threshold which allowed plants to maintain their biomass under water stress. Plants with high amounts of dry mass under drought stress can be considered as drought tolerant genotypes (Khosroshahi et al. 2014). Plants selected for their tolerance did not show a significant difference with the sensitive plants. Nevertheless, the difference was marked on roots morphology. Tolerant seedlings were characterized by white and active roots, whereas brown and dead roots were observed in sensitive seedlings.

After the 90 days of rehydration, the significant decrease of shoot length, number of nodes and number of leaves persisted (Table 1 and Figure 3 B). The absence of growth recovery after rehydration shows the extent of structural damage of water stress to apical and lateral meristems (Rostami and Rahemi 2013). Cerekovic et al. (2013) reported that drought stress continued to inhibit growth of blackcurrant cultivar in the recovery phase. However, a partial recovery of axillary shoots number was observed in seedlings, which reached 48.5 % and 38.7 % of control at 40 g/l and 80 g/l PEG, respectively (Figure 3 A). The partial recovery of number of axillary shoots could be a mechanism adopted by the plant to overcome the inhibition of stem elongation and promote the apparition of new shoots. Olive seedlings continue to maintain their fresh and dry weights after rehydration (Table 2 and 3). However, the aerial part fresh weight of sensitive seedling showed a significant decrease with respect to the control plants. The fresh weight reached 32.3 % of control against 88.2 % in tolerant seedlings (Table 2). The dry weight of the aerial part reached 100 % of control plants in tolerant seedlings treated with 40 g/l PEG (Table 3). An allocation of resources in favor of shoots indicated by the lower value of dry root / shoot ratio was recorded after rehydration (Table 3). It appears that plants try to recover the activity of the aerial part to restore the metabolism and further growth.

The aerial part and roots weights may be a good marker for the selection of drought-tolerant seedlings. ‘Chetoui’ seedlings seem to be tolerant to water stress and could be selected as rootstocks for cultivation in semi-arid region. The assessment of tolerance under field condition is required to check their potential as rootstocks.

Khosroshahi MZ, Ashari ME, Ershadi A, Imani A (2014) Morphological changes in response to drought stress in cultivated and wild almond species. Intern J of Hortic Sci and Tech 1:79-92.