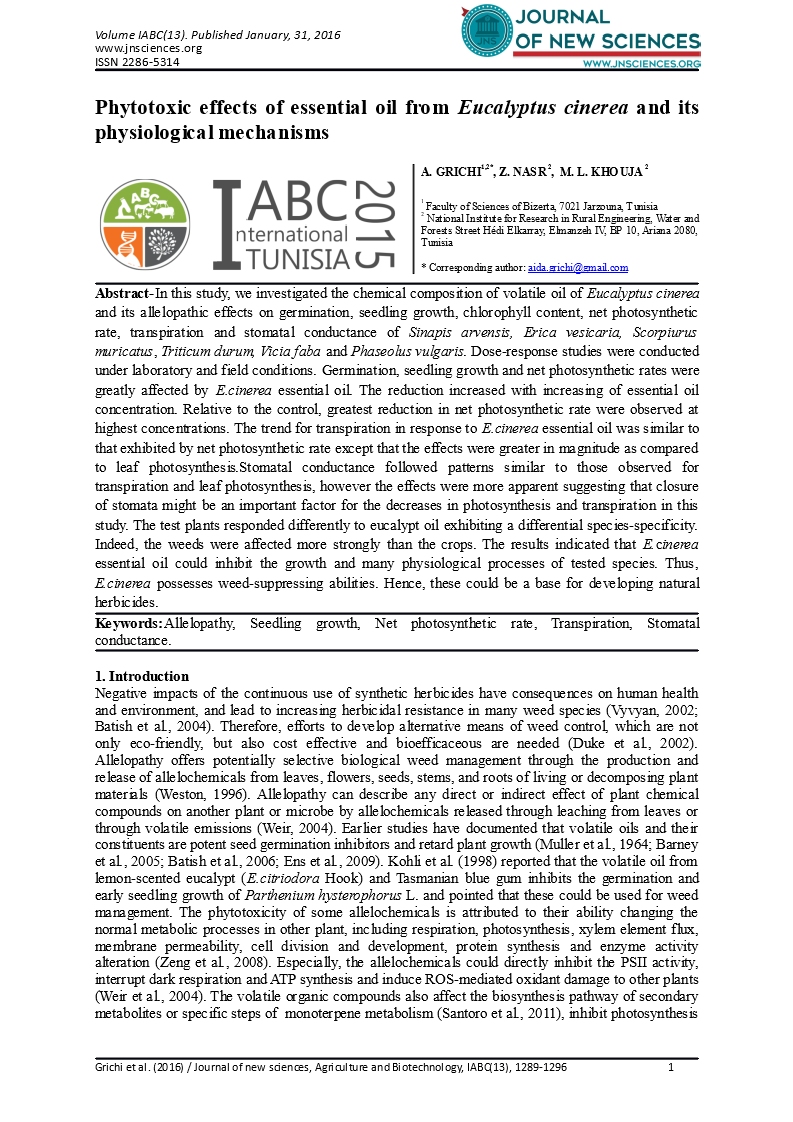 Abstract-In this study, we investigated the chemical composition of volatile oil of Eucalyptus cinerea and its allelopathic effects on germination, seedling growth, chlorophyll content, net photosynthetic rate, transpiration and stomatal conductance of Sinapis arvensis, Erica vesicaria, Scorpiurus muricatus, Triticum durum, Vicia faba and Phaseolus vulgaris. Dose-response studies were conducted under laboratory and field conditions. Germination, seedling growth and net photosynthetic rates were greatly affected by E.cinerea essential oil. The reduction increased with increasing of essential oil concentration. Relative to the control, greatest reduction in net photosynthetic rate were observed at highest concentrations. The trend for transpiration in response to E.cinerea essential oil was similar to that exhibited by net photosynthetic rate except that the effects were greater in magnitude as compared to leaf photosynthesis.Stomatal conductance followed patterns similar to those observed for transpiration and leaf photosynthesis, however the effects were more apparent suggesting that closure of stomata might be an important factor for the decreases in photosynthesis and transpiration in this study. The test plants responded differently to eucalypt oil exhibiting a differential species-specificity. Indeed, the weeds were affected more strongly than the crops. The results indicated that E.cinerea essential oil could inhibit the growth and many physiological processes of tested species. Thus, E.cinerea possesses weed-suppressing abilities. Hence, these could be a base for developing natural herbicides.

Negative impacts of the continuous use of synthetic herbicides have consequences on human health and environment, and lead to increasing herbicidal resistance in many weed species (Vyvyan, 2002; Batish et al., 2004). Therefore, efforts to develop alternative means of weed control, which are not only eco-friendly, but also cost effective and bioefficaceous are needed (Duke et al., 2002). Allelopathy offers potentially selective biological weed management through the production and release of allelochemicals from leaves, flowers, seeds, stems, and roots of living or decomposing plant materials (Weston, 1996). Allelopathy can describe any direct or indirect effect of plant chemical compounds on another plant or microbe by allelochemicals released through leaching from leaves or through volatile emissions (Weir, 2004). Earlier studies have documented that volatile oils and their constituents are potent seed germination inhibitors and retard plant growth (Muller et al., 1964; Barney et al., 2005; Batish et al., 2006; Ens et al., 2009). Kohli et al. (1998) reported that the volatile oil from lemon-scented eucalypt (E.citriodora Hook) and Tasmanian blue gum inhibits the germination and early seedling growth of Parthenium hysterophorus L. and pointed that these could be used for weed management. The phytotoxicity of some allelochemicals is attributed to their ability changing the normal metabolic processes in other plant, including respiration, photosynthesis, xylem element flux, membrane permeability, cell division and development, protein synthesis and enzyme activity alteration (Zeng et al., 2008). Especially, the allelochemicals could directly inhibit the PSII activity, interrupt dark respiration and ATP synthesis and induce ROS-mediated oxidant damage to other plants (Weir et al., 2004). The volatile organic compounds also affect the biosynthesis pathway of secondary metabolites or specific steps of monoterpene metabolism (Santoro et al., 2011), inhibit photosynthesis and trigger the synthesis of reactive oxygen species (ROS) to disrupt the subcellular structure in chlorella vulgaris (Qjan et al., 2009). Volatile oil from Artemisia ordosica inhibits the growth and photosynthetic activity of Palmellococcus miniatus through the combined effects of components in volatile oil (Yang et al., 2012). Kaur et al. (2010) observed that the application of Artemisia oils on 6-week-old weed plants caused losses in chlorophyll concentrations in the leaves and injuries, ranging from chlorosis to necrosis. Singh et al. (2002) also found reduction in chlorophyll content of mature C.occidentalis and E.cruss-galli plants sprayed with eucalypt oils. Based on these reports, it is opined that since volatile of E.cinerea is phytotoxic to weeds, it should be explored for bioherbicidal activity. Thus,the present study aims to investigate the herbicidal activity of E.cinerea volatile oil in terms of effect on plant growth, and impacts on metabolic process such as chlorophyll content, photosynthesis, respiratory activity and stomatal conductance.

2.1. Extraction of essential oil from E.cinerea

Leaves were collected in April 2011 from E.cinerea trees acclimated in Souiniet arboreta (located in Ain Draham, north of Tunisia). The essential oils were extracted by hydrodistillation of 100g of boorishly crushed leaves for 4h, using a standard apparatus recommended by the European Pharmacopeia. Hydrodistillations were performed in triplicate. The yield in essential oil was expressed in % (v/w) of the dry material (Elaissi et al., 2010).

Chemical characterization of the oil

GC Analysis: GC Analysis was carried out with a Hewlett-Packard 6890 apparatus equipped with FID and an intermediately polar Supelco SPB-20 cap. Column (30m×0.32 mm i.d., film thikness 0.25 µm).The oven temp. was programmed isothermal at 35°C for 1 min, rising from 35 to 250°C at 5°/min, and then held isothermal at 250°C for 3 min; injector temp., 250°C; detector temp., 280°C; carrier gas, N2 (1.2 ml/min). The injected volume was 1 µl (10% essential oil in purified hexane). The relative concentration was calculated using the software HP Chemstation, which allowed assimilating the percentages of the various constituents. Retention indices (RI) were determined rel. to the retention times (tR) of a series of n-alkanes (C9-C28) (Elaissi et al., 2010).

Compound Identification: The identification of the compounds was based on the comparison of their RI and mass spectra with those of authentic compounds by means of the NBS75K.L. and Wiley 275 databases and with literature data (Wiley, 1998).

Seeds of all test species: Sinapis arvensis, Erica vesicaria, Scorpiurus muricatus, Triticum durum, Vicia faba and Phaseolus vulgaris were collected locally from agricultural fields on Ousseltia (located in Kairouan, centreast of Tunisia, with arid bioclimatic stage). These were surface-sterilized with sodium hypochlorite (0.1%, w/v) for 2 min, washed under running tap water (for 5min) followed by distilled water and stored for further use.

Dose-response studies were conducted under laboratory conditions to determine the effect of E.cinerea essential oil on growth of test species. Briefly, 10 seeds of all these test species were germinated in Petri dishes (15cm diameter) on a filter paper wetted with 7ml of distilled water. To test the inhibitory effect of eucalypt oil, different amounts of oil were loaded on the inner side of cover of Petri dish (0.12, 0.25, 0.5 and 0.75µl/ml) after spacing the seeds on the base and then sealed immediately with tape. Control was kept without loading essential oil. For each concentration, five replicates were maintained. All the Petri dishes were kept in a growth chamber maintained at 16/18h light/dark period at 25±2°C temperature. After 7 days, the number of seeds that germinated was counted, and their root and shoot lengths were measured.

The percent of inhibition of germination, root and shoot lengths were calculated from the following equation: Inhibition (% of control) = (100-(sample extracts/control) ×100) (Charoenying et al., 2010)

To test the herbicidal activity of the volatile oil from E.cinereaunder field conditions, experiments were conducted in the greenhouse. Seeds of all test species were sown manually in 15cm pots. For this, 1200g of garden soil was taken in each pot and seeds of Sinapis arvensis, Erica vesicaria, Scorpiurus muricatus, Triticum durum, Vicia faba and Phaseolus vulgaris were sown. Pots were placed in experimental house with natural light conditions (Temperature 21°C, Humidity 32%, Sunshine7hj-1) and irrigated daily. When the plants were 4-week-old, they were spray treated with 25, 50, 75 and 100µl/ml solution of E.cinerea essential oil (or distilled water to serve as control) in such a manner that each plant received 6ml of treatment solution. For each treatment five replications were maintained. One- two and 3-days after spray (DAS), the treated test plants were examined for chlorophyll content levels, and the net photosynthesis, transpiration and stomatal conductance were measured.

All data obtained from seed germination, seedling growth, chlorophyll content net photosynthetic rate, transpiration and stomatal conductance assays of test species were expressed as mean values and were, on the condition of significant ANOVA, analyzed by means of multiple comparison SNK tests in order to investigate if significant differences existed between eucalypt oil concentrations and test species. Values of p≤0.05 were considered significantly different.

The essential oil was obtained by boiling hydrodistillation of E.cinerea leaves, which gave an oil of 2.31% yield. The chromatogram obtained by gas chromatography coupled with mass spectrometry indicated that E.cinerea essential oil shared a high proportion of the 1,8-Cineole (48.3%), α-Pinene (14%), and a relatively high mean percentage of α-Terpineol (10.3%) . The ρ-Cymene (hydrocarbons monoterpenes) represent (10%) of the total E.cinerea essential oil (Table.1). The presence of 1,8-cineole as the major compound in E.cinerea, α-Terpineol and α-pinene representing high proportion is in agreement with earlier studies (Elaissi et al., 2010).

The observations made in the present study are parallel to earlier studies documenting the growth inhibitory activity of aromatic plants, including Eucalyptus species and their volatile oils. For example, volatile oil (0.12-0.30 mg/ml) from Eucalyptus citriodora reduced seedling growth and dry weight accumulation in Cassia occidentalis, Amaranthus viridis and Echinochloa crus-galli by ≥ 50% (Batish et al., 2004). It was demonstrated that essential oils from tree Mediterranean Lamiaceae members Rosmarinus officinalis, Thymus vulgaris and Satureja montana (at 500ppm) severely reduced germination and seedling growth of weedy species such as Chenopodium album, Portulaca oleracea and E.crus-galli (Angelini, 2003). Later, it was reported that eucalypt oil (at 0.2-5.0 nl/ml) reduced seed germination and seedling growth of P.hysterophorus by 56-100% (Singh, 2005). The volatile oil from Tagetes minuta (at 100-1000ppm) was demonstrated that inhibited the germination of weed species such as Taraxacum officinale, Mikania cordifolia and Cynodon dactylon (Lopez, 2008). Recently, it was reported that volatile oil from Artemisia scoparia (at 0.14-0.35mg/ml) inhibited radical emergence and seedling growth in Cyperus rotundus and Phalaris minor (Singh, 2009).

The observed growth inhibitory effects on test plants may either be due to synergistic or additive effect of compounds in E.cinerea oil. Allelopathy is the result of the simultaneous action of several compounds and often includes compounds whose chemistry is divergent (Einhellig, 2002). This ecological phenomenon is considered to be responsible for dominance and successful colonization of a particular exotic species in invaded plant community (Barney et al., 2005; Ens et al., 2009).

Parallel to chlorophyll content, a significant decline in photosynthetic activity was observed in E.cinerea essentialoil sprayed plants (Figure3). In response to 25µl/ml Eucalyptus oil treatment, net photosynthesis was reduced by 2.5-50%. It declined further with increasing of eucalypt oil concentration. At 100µl/ml E.cinerea oil treatment, net photosynthesis decreased by 45% (Vicia faba) to 100% (Erica vesicaria, Sinapis arvensis and Scorpuirus murucatus) in test species. The same effects of Eucalyptus oil was observed in the case of respiratory activity and stomatal conductance (Figure3). Indeed, at 100µl/ml Eucalyptus oil treatment, the reduction was 38-100% and 46-100% for respiratory activity and stomatal conductance respectively. For all these parameters, weeds species were more affected than crops species. These observations are parallel to earlier reports that volatile oils affect the cellular respiration and thus interfere with energy metabolism of the plants resulting in reduced growth (Singh et al., 2006b, 2009). Earlier, Abrahim et al. (2000) reported that monoterpenes, the constituents of volatile oils, due to high lipophilicity act as uncouplers of oxidative photophosphorylation, suppress respiration and thus imbalance cellular energy. Lorber and Muller (1976) opined that volatile terpenes damage mitochondria and thus negatively impair respiration and energy metabolism.

Figure3. The effect of E.cinerea essential oil on net photosynthesis (a), respiratory activity (b) and stomatal conductance (c) of test species measured 3 days after treatment.

Based on the present study, we conclude that eucalypt oil possess a strong phytotoxicity against weeds by inhibition of seedling growth and alteration of photosynthetic machinery. Therefore, it could be useful for developing as a bioherbicide for weed management purposes. Indeed, use of Eucalyptuscinerea oil as allelopathic agent will be eco-friendly, cheaper, practical and efficacious mode of weed control. Nevertheless, further studies are required to explore the exact cascade of events that are responsible for growth inhibitory action of E.cinerea essential oil.

This research was financially supported by National Institute for Research in Rural Engineering, Water and Forests. We are also thankful to Faculty of Sciences of Bizerta.