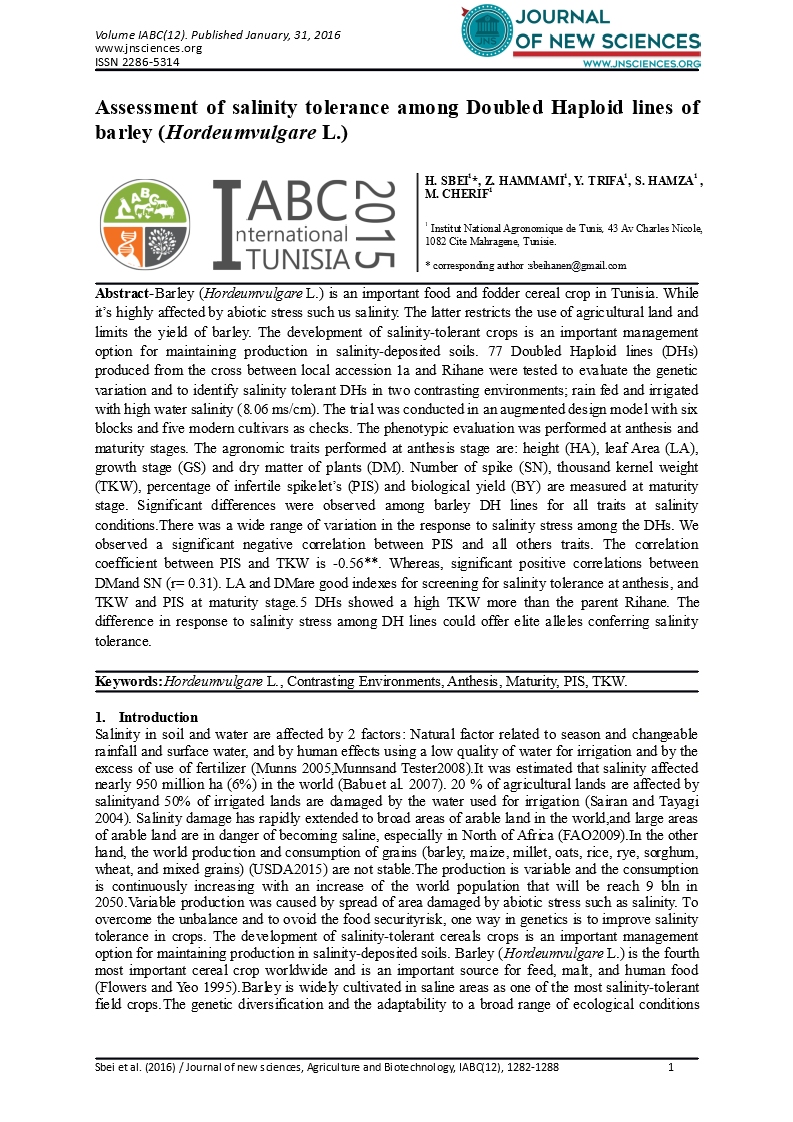 Abstract-Barley (Hordeumvulgare L.) is an important food and fodder cereal crop in Tunisia. While it’s highly affected by abiotic stress such us salinity. The latter restricts the use of agricultural land and limits the yield of barley. The development of salinity-tolerant crops is an important management option for maintaining production in salinity-deposited soils. 77 Doubled Haploid lines (DHs) produced from the cross between local accession 1a and Rihane were tested to evaluate the genetic variation and to identify salinity tolerant DHs in two contrasting environments; rain fed and irrigated with high water salinity (8.06 ms/cm). The trial was conducted in an augmented design model with six blocks and five modern cultivars as checks. The phenotypic evaluation was performed at anthesis and maturity stages. The agronomic traits performed at anthesis stage are: height (HA), leaf Area (LA), growth stage (GS) and dry matter of plants (DM). Number of spike (SN), thousand kernel weight (TKW), percentage of infertile spikelet’s (PIS) and biological yield (BY) are measured at maturity stage. Significant differences were observed among barley DH lines for all traits at salinity conditions.There was a wide range of variation in the response to salinity stress among the DHs. We observed a significant negative correlation between PIS and all others traits. The correlation coefficient between PIS and TKW is -0.56**. Whereas, significant positive correlations between DMand SN (r= 0.31). LA and DMare good indexes for screening for salinity tolerance at anthesis, and TKW and PIS at maturity stage.5 DHs showed a high TKW more than the parent Rihane. The difference in response to salinity stress among DH lines could offer elite alleles conferring salinity tolerance.

Salinity in soil and water are affected by 2 factors: Natural factor related to season and changeable rainfall and surface water, and by human effects using a low quality of water for irrigation and by the excess of use of fertilizer (Munns 2005,Munnsand Tester2008).It was estimated that salinity affected nearly 950 million ha (6%) in the world (Babuet al. 2007). 20 % of agricultural lands are affected by salinityand 50% of irrigated lands are damaged by the water used for irrigation (Sairan and Tayagi 2004). Salinity damage has rapidly extended to broad areas of arable land in the world,and large areas of arable land are in danger of becoming saline, especially in North of Africa (FAO2009).In the other hand, the world production and consumption of grains (barley, maize, millet, oats, rice, rye, sorghum, wheat, and mixed grains) (USDA2015) are not stable.The production is variable and the consumption is continuously increasing with an increase of the world population that will be reach 9 bln in 2050.Variable production was caused by spread of area damaged by abiotic stress such as salinity. To overcome the unbalance and to ovoid the food securityrisk, one way in genetics is to improve salinity tolerance in crops. The development of salinity-tolerant cereals crops is an important management option for maintaining production in salinity-deposited soils. Barley (Hordeumvulgare L.) is the fourth most important cereal crop worldwide and is an important source for feed, malt, and human food (Flowers and Yeo 1995).Barley is widely cultivated in saline areas as one of the most salinity-tolerant field crops.The genetic diversification and the adaptability to a broad range of ecological conditions have highly strengthenedthe salinity tolerance in barley (Sbei et al. 2013). Many studies were interested in screeningbarley for salinity tolerance (Chen et al. 2005, Ellis et al. 2002, Mano and Takeda 1997, Taghipour and Salehi 2008). Most of these studies evaluate the salinity tolerance of barley at earlier stages like germination (Mano and Takeda 1997) and seedling stage (Sbei et al. 2014) becausehydroponic system and controlled conditions reduce environmental effects. But researchers discovered that salt tolerance is controlled by different QTLs/genes at different development stages (Mano and Takeda 1997,Xueet al.2009).In the present study, seventy seven doubled haploid lines (DHs) produced from the cross between 1a and Rihane were tested to evaluate the genetic variation and to identify salinity tolerant DHs. The primary objectives for this work were to: 1) determine suitable traits for screening for salinity tolerance in barley at anthesis and maturity stages 2) check the performance of parents under salinity stress and 3) identify superior salinity tolerant DH lines.

A barley population of 77 doubled-haploid lines derived from a cross between Rihane, a Tunisian cultivar derived from an ICARDA nursery, and the local line ‘1a’ was used. DH lines were produced from F1 using anther culture (Don Palmer et al. 2005).Parents Rihane and 1a were produced at National Institute of Agronomic at Tunis. DH lines were evaluated in two contrasting environments; rain fed (Mateur) and irrigated (Medenine) with high water salinity (8.06 ms/cm). Five modern cultivars were used as checks (Roho, Tej, Manel, Martin, Rihane).

DH lines with parents were sown in the field with 2 contrasting environments: South (Medenine) and North of Tunisia (Mateur) on December 2010.The trial was conducted in mixed model augmented design with six blocks and five checks. Each accession was sown in a square meter area (1 x1 m) ie 5 lines spaced 25 cm. Barley sown in site of Medenine is irrigated with saline water with a drip system. The water irrigation contains 6 gr/l of salt (8.06 ms/cm). The salinity water was supplied from seedling stage to maturity stage. Barley plants have been monitored at 2 development stages: anthesis and maturity. The phenotypic evaluation was performed on 8 agronomic parameters: height (HA), leaf Area (LA), dry matter (DM), growth stage (GS), spike number (SN), biological yield (BY), thousand kernel weight (TKW) and percentage of infertile spikelet’s (PIS). At anthesisstages, five plants were taken randomly from each experimental unit to perform the analysis of HA, LA and DM. Height (HA) is measured for the main axis from the basis of tillering to the end of the spike in cm. The F3 leaf of main axis of five plants was scanned measurement of leaf area was calculated by an application "Mesurim_pro_29_03_10”. To determine the growth stage, we used the Zadoks scale. We noted the growth stage when 50% of the lines reach the growth stage 69. The growth stage varied from GS 50 to GS 75. For biomass measure, 5 plants per line were dried for 48 hours at 80°C, then weighted (g). At maturity stage, a random 0.25 m was used for measurement of yield and yield components. Spikes and straw were dried for 48 hours at 80°C. 20 spikes per lines were used to determine the percentage of the infertile spikelet’s according to the formula below:PIS (%) = infertile spikelet’s number/total infertile spikelet’s *100.

Error variance was based on variance of the checks between plots and the values were adjusted regarding fixed model augmented design using SAS software(SAS Inst. 2004).Frequency of distributions and pearson correlation analysis were performed using SPSS software (SPSS Inc. 2010).

Means of selected traits with standard deviation were showing in the table 2. Leaf area, dry matter, percentage of infertile spikelet’s and the thousand kernel weight were affected by salinity. The dry matter was reduced from 13.53 to 4.33 g/ m2when plants are irrigated with saline water. The means of PIS was 22.34 %under rain fed condition and increased to 26% under salinity condition. Salinity affected the yield production of barley starting by the reduction of the dry matter and surface area at anthesis stage and the stressed continued at maturity stage by reducing the spike number per plant and the infertility ofspikelet’s per plant.

Five DHs (30, 37, 57, 63 and 65) had good response according to the combined traits (LA, DM, PIS, SN, TKW) and showed better performance to salinity stress. The behavior of the 5 lines during salinitytreatment showed that these lines could be introduced as salinity tolerance and use for future experiments.

This research was supported by the research and development action “Characterization and evaluation of salinity tolerance in barley accessions’’ funded by the ministry of agriculture, water resources and fisheries.

FAO (2009) High level expert forum – how to feed the world in 2050? Economic and social development department, Food and Agricultural Organization of the United Nations, Rome