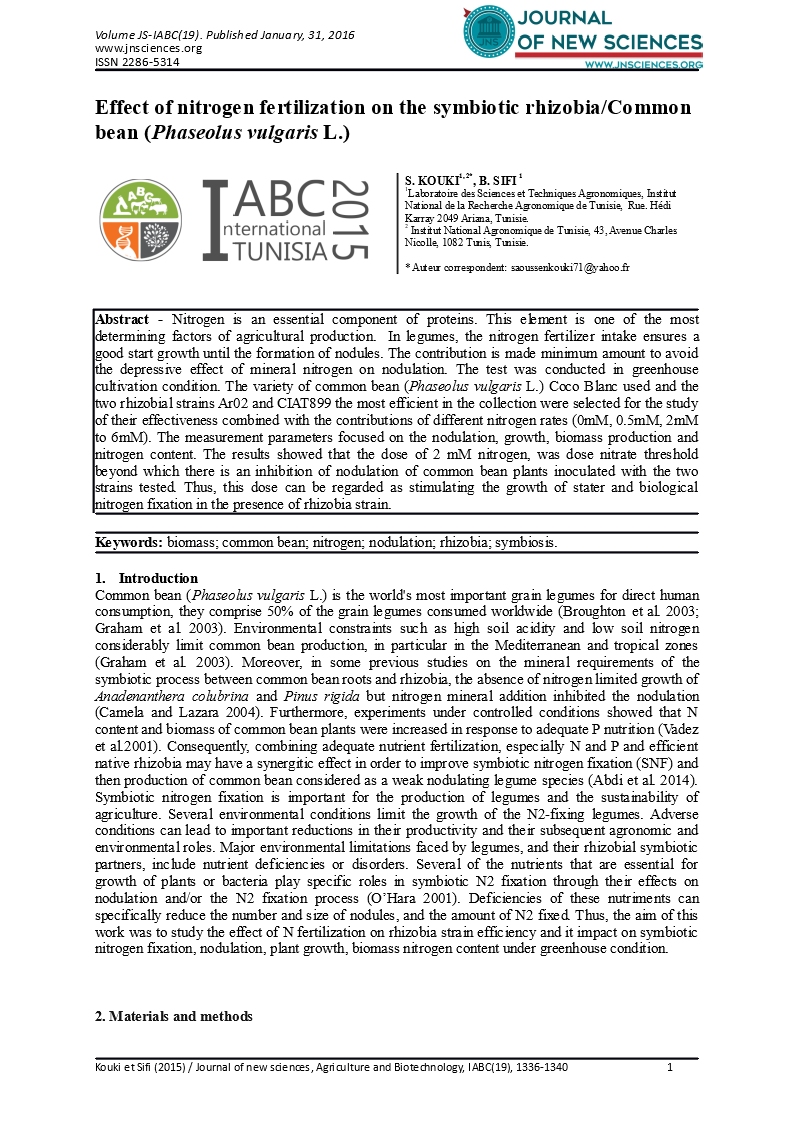 Abstract - Nitrogen is an essential component of proteins. This element is one of the most determining factors of agricultural production.  In legumes, the nitrogen fertilizer intake ensures a good start growth until the formation of nodules. The contribution is made minimum amount to avoid the depressive effect of mineral nitrogen on nodulation. The test was conducted in greenhouse cultivation condition. The variety of common bean (Phaseolus vulgaris L.) Coco Blanc used and the two rhizobial strains Ar02 and CIAT899 the most efficient in the collection were selected for the study of their effectiveness combined with the contributions of different nitrogen rates (0mM, 0.5mM, 2mM to 6mM). The measurement parameters focused on the nodulation, growth, biomass production and nitrogen content. The results showed that the dose of 2 mM nitrogen, was dose nitrate threshold beyond which there is an inhibition of nodulation of common bean plants inoculated with the two strains tested. Thus, this dose can be regarded as stimulating the growth of stater and biological nitrogen fixation in the presence of rhizobia strain.

Common bean (Phaseolus vulgaris L.) is the world's most important grain legumes for direct human consumption, they comprise 50% of the grain legumes consumed worldwide (Broughton et al. 2003; Graham et al. 2003). Environmental constraints such as high soil acidity and low soil nitrogen considerably limit common bean production, in particular in the Mediterranean and tropical zones (Graham et al. 2003). Moreover, in some previous studies on the mineral requirements of the symbiotic process between common bean roots and rhizobia, the absence of nitrogen limited growth of Anadenanthera colubrina and Pinus rigida but nitrogen mineral addition inhibited the nodulation (Camela and Lazara 2004). Furthermore, experiments under controlled conditions showed that N content and biomass of common bean plants were increased in response to adequate P nutrition (Vadez et al.2001). Consequently, combining adequate nutrient fertilization, especially N and P and efficient native rhizobia may have a synergitic effect in order to improve symbiotic nitrogen fixation (SNF) and then production of common bean considered as a weak nodulating legume species (Abdi et al. 2014). Symbiotic nitrogen fixation is important for the production of legumes and the sustainability of agriculture. Several environmental conditions limit the growth of the N2-fixing legumes. Adverse conditions can lead to important reductions in their productivity and their subsequent agronomic and environmental roles. Major environmental limitations faced by legumes, and their rhizobial symbiotic partners, include nutrient deficiencies or disorders. Several of the nutrients that are essential for growth of plants or bacteria play specific roles in symbiotic N2 fixation through their effects on nodulation and/or the N2 fixation process (O’Hara 2001). Deficiencies of these nutriments can specifically reduce the number and size of nodules, and the amount of N2 fixed. Thus, the aim of this work was to study the effect of N fertilization on rhizobia strain efficiency and it impact on symbiotic nitrogen fixation, nodulation, plant growth, biomass nitrogen content under greenhouse condition.

For greenhouse trials, four plants for each treatment were harvested at the early flowering stage. Nodules were then removed from the roots and the plants were separated into shoots and roots and dried in an oven at 70 °C for 72 h. After dry weight measurements, shoots of each sample were ground individually and the N content was measured using the Kjeldahl procedure. Complete systems with nodules of four plants were collected. Then, after rinsing them carefully, the roots and shoots of each plant were placed in paper bags. Symbiotic parameters (nodule number and nodule dry weight), shoots and roots dry weight, aerial parts and root length, nitrogen content (%N/Pl) at flowering stage were measured on each plant individually.

The experimental design was a randomized complete block. Statistical analysis was performed by the SPSS 11.5 software. The data were analysed using ANOVA and subsequent comparison of means was performed using the Fisher’s LSD test at p < 0.05.

Statistical analysis of the results showed that excess mineral nitrogen in the medium inhibited the nodulation in number and biomass with both strains Ar02 and CIAT899 with significant differences between nitrogen treatments (Fig.1).

Buttery (1987) reported that nitrogen fertilization is sometimes necessary to improve the efficiency of potential pulses when N2 fixation symbiotic nitrogen is deficient. The response of the legume-rhizobia symbiosis with added nitrogen is definitely determined by the application time (growth phase), the level and the form of N and legume species (Zahran 1999). As regards the nitrate, the effects on nodulation were reported by several authors. (Tanner et al. 1964; Thibodeau and Jaworski 1975; Bhangoo et al. 1976) showed the positive action of low-dose nitrate brought on nodulation. However, fertilizer rates higher than those exerting nitrogen dose Start up generally reduces nodulation and N2 fixation (Afza et al. 1987). The negative effects have been reported on the establishment and functioning of the symbiosis; by inhibition of nodulation (Harper and Gibson 1984) or the acceleration of nodules senescence (Chen and Phillips 1976). Increasing the amount of nitrogen in the NH4+ and NO3- in the soil would result in an inhibition of infection root (Abdel-Wahab et al. 1996) and nodule development (Atkins et al. 1984; Imsande 1986; Timmers et al. 2000). Investigations have shown that inhibits mainly NO3- training nodules on the roots of legumes rather than nutritional function of the plant (Abdel-Wahab et al. 1996). This nitrogen effect on nodulation, has been reported by several authors (El Mili 1983; Vance et al. 1987; L'taief et al. 2009).

Common bean plants inoculated with rhizobia strains have improved aerial dry biomass compared to the control(0mM). Similarly, the nitrogen fertilizer treatment significantly increased the biomass production of different organs of the common bean plants compared to treatments without fertilization and without inoculation. However inoculation with Ar02 and CIAT899 application of different nitrogen rates did not improve significantly root biomass common bean compared to indicator (Fig. 3).

The interaction between the shoot and the inorganic nitrogen dose showed no significant differences for the different treatments inoculated with these two strains as to the control.

Statistical analysis of the data showed significant differences between the treatments to different nitrogen strains as regards the height of the plants. We also note that following inoculation aerial growth improved. For root length we notice that the S2 strain showed maximum growth with 6 mM dose of mineral nitrogen. (Fig.5).

Streeter (1985) reported that a low level of combined nitrogen stimulates plant growth, increases the mass of the nodules and is necessary to maximize the performance of the host legume. According to some authors reported that the addition of KNO3 in the plantlet growth medium significantly reduced the number of rhizobia adhering to the alfalfa roots. It has been found that high levels of nitrite and amino acid in alfalfa seedlings nodules treated with nitrate (10 mM KNO3) are correlated with a decrease leghaemoglobin content and nitrogenase activity. However, it is well known that high contents of nitrogen in soil block the effect of inoculation (Ssali and Keya 1983). Diatloff et al. (1991) reported that N fertilizer of 100 kg N / ha reduced the rate ureides common bean.

Inoculation improved the nitrogen content in effect the important percentage is marked at2 mM + S1 and 2mM+S2 with 3,105% and 3,222% while plants supplemented with 2 mM and without inoculationwere recorded percentages of nitrogen about 2.798% (Fig.6).

In this study, the combined inoculation interaction nitrogen fertilization sets obviously in our experimental conditions, the stimulating effect of the intake of nitrogen in the form of potassium nitrate on growth and biological nitrogen fixation in common bean.

However, the efficacy results between the two strains rhizobial CIAT899 and Ar02 showed no differences to the nitrogen concentrations in common bean plants irrespective of the applied nitrogen dose.