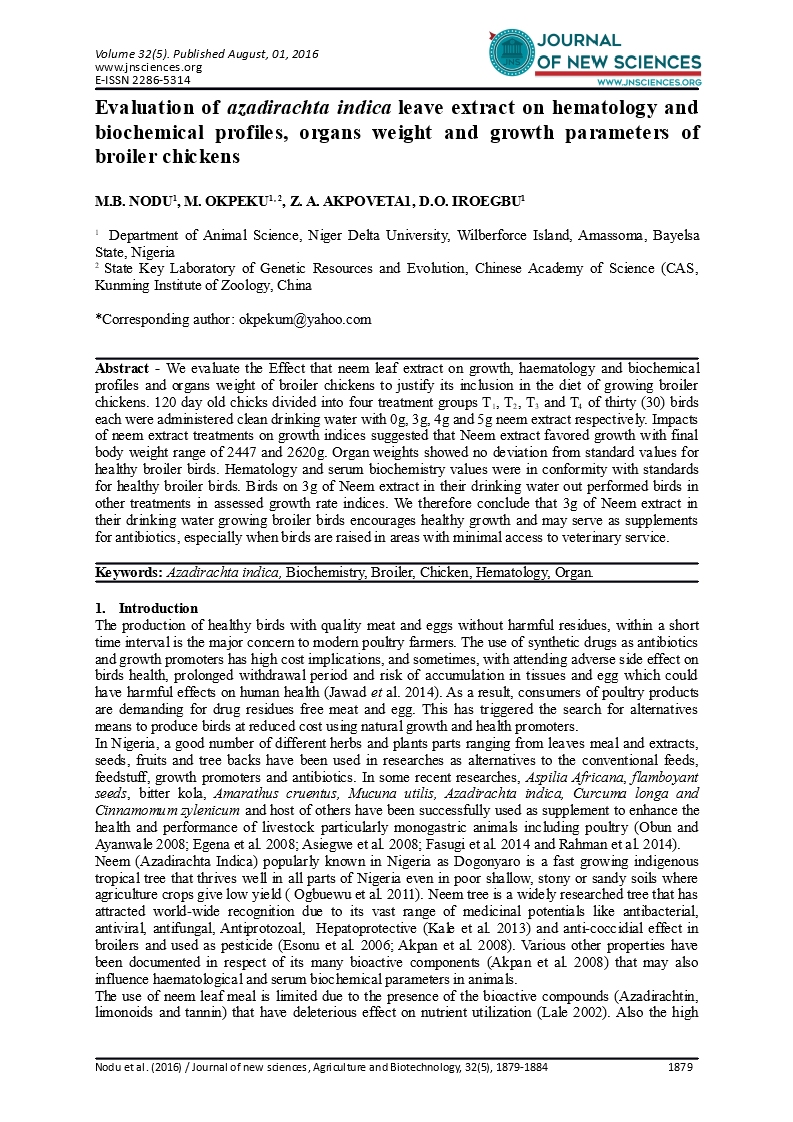 Abstract - We evaluate the Effect that neem leaf extract on growth, haematology and biochemical profiles and organs weight of broiler chickens to justify its inclusion in the diet of growing broiler chickens. 120 day old chicks divided into four treatment groups T1, T2, T3 and T4 of thirty (30) birds each were administered clean drinking water with 0g, 3g, 4g and 5g neem extract respectively. Impacts of neem extract treatments on growth indices suggested that Neem extract favored growth with final body weight range of 2447 and 2620g. Organ weights showed no deviation from standard values for healthy broiler birds. Hematology and serum biochemistry values were in conformity with standards for healthy broiler birds. Birds on 3g of Neem extract in their drinking water out performed birds in other treatments in assessed growth rate indices. We therefore conclude that 3g of Neem extract in their drinking water growing broiler birds encourages healthy growth and may serve as supplements for antibiotics, especially when birds are raised in areas with minimal access to veterinary service.

The production of healthy birds with quality meat and eggs without harmful residues, within a short time interval is the major concern to modern poultry farmers. The use of synthetic drugs as antibiotics and growth promoters has high cost implications, and sometimes, with attending adverse side effect on birds health, prolonged withdrawal period and risk of accumulation in tissues and egg which could have harmful effects on human health (Jawad et al. 2014). As a result, consumers of poultry products are demanding for drug residues free meat and egg. This has triggered the search for alternatives means to produce birds at reduced cost using natural growth and health promoters.

In Nigeria, a good number of different herbs and plants parts ranging from leaves meal and extracts, seeds, fruits and tree backs have been used in researches as alternatives to the conventional feeds, feedstuff, growth promoters and antibiotics. In some recent researches, Aspilia Africana, flamboyant seeds, bitter kola, Amarathus cruentus, Mucuna utilis, Azadirachta indica, Curcuma longa and Cinnamomum zylenicum and host of others have been successfully used as supplement to enhance the health and performance of livestock particularly monogastric animals including poultry (Obun and Ayanwale 2008; Egena et al. 2008; Asiegwe et al. 2008; Fasugi et al. 2014 and Rahman et al. 2014).

Neem (Azadirachta Indica) popularly known in Nigeria as Dogonyaro is a fast growing indigenous tropical tree that thrives well in all parts of Nigeria even in poor shallow, stony or sandy soils where agriculture crops give low yield ( Ogbuewu et al. 2011). Neem tree is a widely researched tree that has attracted world-wide recognition due to its vast range of medicinal potentials like antibacterial, antiviral, antifungal, Antiprotozoal, Hepatoprotective (Kale et al. 2013) and anti-coccidial effect in broilers and used as pesticide (Esonu et al. 2006; Akpan et al. 2008). Various other properties have been documented in respect of its many bioactive components (Akpan et al. 2008) that may also influence haematological and serum biochemical parameters in animals.

The use of neem leaf meal is limited due to the presence of the bioactive compounds (Azadirachtin, limonoids and tannin) that have deleterious effect on nutrient utilization (Lale 2002). Also the high fiber content in neem leaf meal poses serious intake and digestibility problems in poultry diets (Udedibie and Opara 1998). Therefore the use of leaf extracts could overcome this barrier towards tapping the good nutritional characteristics of Neem leaf meal. The leaves extract contain nimbin, nimbinene, 6-desacetylnimbiene, nimbandol, nimbolide and quercetin (Miltra et al. 2000). An aqueous extract (10%) of tender leaves has been reported to possess anti-viral properties against fowl pox, infectious bursal disease (IBD) and New castle disease virus (NDV) and significantly enhance the antibodies produced against the IBD and NDV (Sadekar et al. 1998). Other medicinal properties of Azadirachta indica (neem) documented include; anti-inflammatory, anti-gastric ulcer, anti-fungal, anti-bacterial, diuretic, anti-helminthic, Immunomodulatory effect and performance in broilers (Biswas et al. 2002).

The need to explore neems potential as feed additive is further intensified by seriously criticism of the use of antibiotic growth promoters (AGP) in the poultry industry, because of the development of microbial resistance to these products and the potential harmful effects on human health as residues left in meat and egg (Padalwar 1994). The use of this medicinal plant as feed addictive in the diet of broilers chicken, with the objectives of improving growth performance and hematological characteristics has not been fully addressed.

Growth performances and blood profiles are important indices of physiological state of animals (Khan and Zafer 2005). Serum biochemistry and hematological features have attracted many workers in order to make clinical predictions of the health status in animals, birds and even humans. The blood picture varies with certain conditions such as stress, infections and toxicity and blood constituents provide valuable media for clinical investigations and nutritional evaluation (Aderemi 2004; Khan and Zafer 2005).

Majority of medicinal plants do not have residual effects (Tipu et al. 2006). For the fact that whatever an animal ingests be it in solid or liquid form must report in the blood profile, then blood profile evaluation is important in order to carryout clinical investigations of the health status of the animals or birds. We evaluate the Effect that neem leaf extract on growth, haematology and biochemical profiles and organs weight of broiler chickens to justify its inclusion in the diet of growing broiler chickens.

This experiment was conducted at the poultry unit of the teaching and research farm of Niger Delta University Wilberforce Island, Bayelsa State of Nigeria. Wilberforce Island is geographically located with latitudes “4o51” North and 5o23” south and longitudes 5o22” west and 6o45” east. Wilberforce Island is situated within the rainforest zone, with a humid equatorial climate with mean annual rainfall ranging from 2000mm to 4000mm, an average temperature of 30oC and relative humidity between 55 to 90percent.

A total of one hundred and twenty (120) day old chicks (Cuphon chicks) were bought from De-right Hatchery in Ibadan Oyo state of Nigeria. On arrival, the chicks were counted, de-boxed, weighed and administered Intra Ocula (I.O) vaccine and anti-stress (vitalyte). The chicks were brooded and acclimatized for three (3) weeks, during which they were fed with commercial chick starter feed and cool clean drinking water.

At arrival of the birds, they were housed in the brooding house that had been prepared by cleaning, washing and disinfecting. Brooders were set up in good working condition. The floor was well littered with wood shavings and the walls covered with dark water-proof materials. At the completion of the brooding period, the birds were divided into four (4) major groups tagged T1, T2, T3 and T4 of thirty (30) birds each. Each treatment (T) group was further subdivided into 3 replicates, tagged R1 R2 and R3 of ten (10) birds per replicate, in a completely randomized design (CRD). Treatment 1 (T1) was the control and the birds in the T1 were administered clean drinking water without neem extract (0% neem extract). Treatments 2, 3 and 4 (T2, T3 and T4) were administered neem extracts (NE) at different concentrations of 3g, 4g and 5g per liter of water respectively.

Mature disease free neem leaves were collected from Aven Community in Patani Local Government Area of Delta State, Nigeria. 3g for T2, 4g for T3 and 5g for T4 of neem leaves were weighed, washed blended with one (1) litre of water and with a sieve the leaf particles were removed for each treatment. For every quantity of drinking water measured, one (1) litre of neem extract was added and administered to the birds for eight (8) consecutive weeks. The, neem extracts was prepared on daily basis.

At the end of the experimental period, three (3) birds per treatment were randomly selected and bled by severing the jugular vein. The blood samples were collected in labeled lithium heparin bottle and were taken to the laboratory for blood profile evaluation. Vital organs (Gizzards, lungs, liver, spleen, kidney, proventriculus, crop and heart) of the slaughtered birds were weighed using electronic weighing machine and records were taken for organ weight determination.

The data were analyzed statistically between the control and the treatment groups of chickens, between replicates of treatment and between treatment by variance (ANOVA) and means were compared employing Duncan’s Multiple Range Test (Duncan, 1955).

Average weight of vital body organs of broiler chickens administered Azadirachta indica extract (Table 2) did not differ significantly (P>0.05) except for lungs weight and these did not deviate from standard values for healthy birds; this implies that neem extract up to 5g weight diluents in drinking water of broiler birds supports healthy growth of broiler bird.

In this study, final live weight of broilers subjected to the different dietary groups ranged between 2447 and 2620g; these are high values, higher than recommended live weight of 1.6 to 1.8 kg for broiler finishers (Kekeocha, 1984) and better than 1733 to 2283g reported by Sese et al. (2013) for broilers in the same region. Significant live weight values and weight gain implied that elevation of dietary intake is not directly proportionate to nutrient value but effectiveness of feed conversion to meat. 3g grounded neem extact per one liter of drinking water gave the best values for final live weight (7009.59g), weight gain (1900g), FCR (3.68) and FCE (27%). This implied that this level of neem extract inclusion in drinking water of broiler birds has the potential of stimulating best growth rate. extremely low percentage mortality observed in treatments in which neem extract was administered suggests that the neem extract acted positively as an antibiotic at all level; supporting previous reports that the active ingredients in neem (eg, Nimbin, Nimbidine, Azadirachtin etc.) (Brahmachari, 2004) inhibit activities of a host of pathogens (Emenalom, 1998; Awosanya et al. 1999; Amadioha 2000) and can thus be used as antibiotics in broiler production.

Average weight of organs for gizzard (31 to 44g), lungs (8 to 10g), liver (31 to 47g), spleen (2g), crop (14 to 17g), heart (9 to 14g) kidney (16 to 19g) and proventiculus (9 to 11g) observed in this study were relatively low compared with reported values for broilers plant extracts (Ismail et al. 2008; Seoetan and Oyewale 2009; Tuleun et al. 2011; Sese et al. 2013) they observed that internal organ enlargement, particularly, liver and pancreas, become inflamed in reaction to the release of trypsin inhibitors in legumes, the authors concluded that residual anti-nutritional factors do not adversely affect organ cuts (Akinmutimi, 2004; Ologhobo et al., 1993) but are indicators of presence of anti-nutritional elements which may be harmful. Results of this study therefore suggest absence or reduce anti-nutritional elements in neem extracts and confirm its safety.

There were no significant differences observed in all parameters measured in heamatology and serum biochemistry assays, observed values are in tandem with normal ranges reported for healthy birds (Trinca et al. 2012); this implies that the use of neem extract as supplement for antibiotic in broiler production is both safe and healthy.

In conclusion, this study has shown that neem extract inclusion in water for growing broiler birds has no detrimental effect on birds which implies that their consumable products will pose no health hazard to consumers. Judging from the results of this present work corroborated with the works of other scholars in the field it is recommended that a safe level of neem extract will do no harm and can be incorporated. We therefore conclude that 3g of Neem extract in their drinking water growing broiler birds encourages healthy growth and may serve as supplements for antibiotics, especially when birds are raised in areas with minimal access to veterinary service.

The authors declare they have no competing interests.

Aderemi, F.A., (2004). Effects of Replacement of Wheat bran with Cassava root Sieviate Supplemented or unsupplemented with enzyme on the haematology and serum biochemistry of pullet chicks. Tropical Journal of Animal Science; 7:147-153.