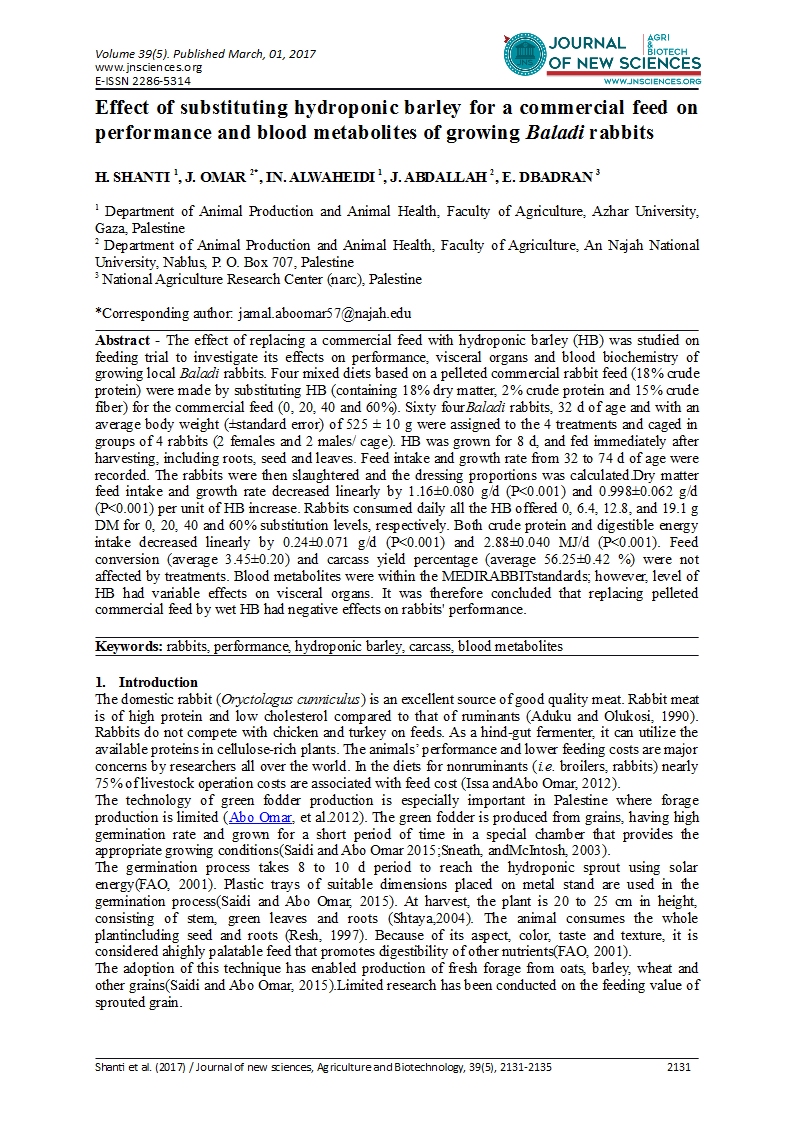 Abstract - The effect of replacing a commercial feed with hydroponic barley (HB) was studied on feeding trial to investigate its effects on performance, visceral organs and blood biochemistry of growing local Baladi rabbits. Four mixed diets based on a pelleted commercial rabbit feed (18% crude protein) were made by substituting HB (containing 18% dry matter, 2% crude protein and 15% crude fiber) for the commercial feed (0, 20, 40 and 60%). Sixty fourBaladi rabbits, 32 d of age and with an average body weight (±standard error) of 525 ± 10 g were assigned to the 4 treatments and caged in groups of 4 rabbits (2 females and 2 males/ cage). HB was grown for 8 d, and fed immediately after harvesting, including roots, seed and leaves. Feed intake and growth rate from 32 to 74 d of age were recorded. The rabbits were then slaughtered and the dressing proportions was calculated.Dry matter feed intake and growth rate decreased linearly by 1.16±0.080 g/d (P<0.001) and 0.998±0.062 g/d (P<0.001) per unit of HB increase. Rabbits consumed daily all the HB offered 0, 6.4, 12.8, and 19.1 g DM for 0, 20, 40 and 60% substitution levels, respectively. Both crude protein and digestible energy intake decreased linearly by 0.24±0.071 g/d (P<0.001) and 2.88±0.040 MJ/d (P<0.001). Feed conversion (average 3.45±0.20) and carcass yield percentage (average 56.25±0.42 %) were not affected by treatments. Blood metabolites were within the MEDIRABBITstandards; however, level of HB had variable effects on visceral organs. It was therefore concluded that replacing pelleted commercial feed by wet HB had negative effects on rabbits' performance.

The domestic rabbit (Oryctolagus cunniculus) is an excellent source of good quality meat. Rabbit meat is of high protein and low cholesterol compared to that of ruminants (Aduku and Olukosi, 1990). Rabbits do not compete with chicken and turkey on feeds. As a hind-gut fermenter, it can utilize the available proteins in cellulose-rich plants. The animals’ performance and lower feeding costs are major concerns by researchers all over the world. In the diets for nonruminants (i.e. broilers, rabbits) nearly 75% of livestock operation costs are associated with feed cost (Issa andAbo Omar, 2012).

The technology of green fodder production is especially important in Palestine where forage production is limited (Abo Omar, et al.2012). The green fodder is produced from grains, having high germination rate and grown for a short period of time in a special chamber that provides the appropriate growing conditions(Saidi and Abo Omar 2015;Sneath, andMcIntosh, 2003).

The germination process takes 8 to 10 d period to reach the hydroponic sprout using solar energy(FAO, 2001). Plastic trays of suitable dimensions placed on metal stand are used in the germination process(Saidi and Abo Omar, 2015). At harvest, the plant is 20 to 25 cm in height, consisting of stem, green leaves and roots (Shtaya,2004). The animal consumes the whole plantincluding seed and roots (Resh, 1997). Because of its aspect, color, taste and texture, it is considered ahighly palatable feed that promotes digestibility of other nutrients(FAO, 2001).

The adoption of this technique has enabled production of fresh forage from oats, barley, wheat and other grains(Saidi and Abo Omar, 2015).Limited research has been conducted on the feeding value of sprouted grain.

The objective of this study was to investigate the performance, visceral organ mass and blood metabolites of Baladi rabbits fed HB as part of commercial rabbit feed.

The study was conducted at the farm of Azhar University, Gaza city, Palestine, which is a coastal area, after approval of the University Animal Care and Use Committee.

Production of HB was conducted under temperature controlled conditions (22 ± 1°C) and natural illumination in growth chamber at the project site, Gaza city, Palestine.

Hydroponic system is composed of a hydroponic chamber with an area of 33 m2. The chamber is composed of metal frame and shelves. Shelves in the chamber hold 126 trays with capacity of chamber to produce approximately one ton of green fodder per growth cycle (8 days). Plastic trays with dimensions 90 x 30 x 4 cm were used for growing barley grains. These trays were obtained from the local market of Gaza city, Palestine. An air conditioning was used to control temperature inside the growth chamber which was maintained at 22 ± 1°C. The relative humidity in the growth room was 65%.

Sixty-four Baladi 32 d-old rabbits, with an average initial weight (±standard error) of 525±10 g were assigned to the 4 treatments and caged in groups of 4 rabbits (2 females and 2 males/cage). A pelleted commercial feed was used as control diet (C). The other three treatments were obtained by replacing 20, 40 and 60% of pelleted control feed by HB (HB20, HB40 and HB60, respectively). Rabbits were supplied with (% pelleted feed/ % wet HB): 80/20, 60/40 and 40/60. Chemical composition of commercial feed and HB is shown in Table 1. The amounts of pelleted commercial feed and HB offered per week in each treatment are shown in Table 2. Pelleted feed and HB were provided in different feeders. Rabbits were treated with IVOMEC (Merial Limited, Luluth, GA, USA) and Cogla Vac (Cogla Laboratories, Libourne, France) against internal and external parasites, and enterotoxaemia, respectively, immediately prior to the start of the experiment. Rabbits were kept in cages measuring 90×60×40 cm, equipped with two hopper-type feeders and automatic nipple drinkers. Average temperature in the area was 20 ºC. Feed consumption was obtained daily by weighing the amount offered and the amount remaining per cage and rabbits were weighed weekly. Feed conversion was obtained from the sum of the dry HB intake and dry matter intake of pelleted commercial feed divided by rabbit weight gain. Digestive problems and mortalities did not occur during the study.

Blood samples were collected into labeled Ethylene-deamine-tetra-acetic acid (EDTA)treated tubes for haematological analysis and into tubes without anticoagulant for serum biochemical evaluation.Evaluations were conducted according to the method of Bitto and Gemade(2001).

At the end of the experiment (age of 74 d), all rabbits were slaughtered after an 18 h fast according to routine procedures at local commercialslaughter facilities. Fasted-live and hot carcass weights were recorded before and immediately after slaughter. Directlyafter slaughter, non-carcass components (i.e., head and feet, lungs and trachea, heart, liver, kidneys) were removed and weighed. Carcasses were chilled at 4 ◦C for 24 h and cold carcass weights were recorded. Dressingproportion was calculated as the hot carcass weight proportion of fasted BW. Empty body weight and weights of edible parts (carcass without head, liver, heart, kidneys and lungs) were recorded.

All of the HB offered was totally consumed but pelleted feed always remained in feeders. Results for feeding trial and carcass yield in rabbits, during the 42 d experiment with the addition of HB are shown in Table 3. Inclusion of HB caused a linear reduction in pelleted feed intake (P<0.001). Total dry matter intake was also linearly decreased (P<0.001) by 1.16±0.80 g/d per additional unit of HB. This could be explained by the bulky nature of the wet HB which could have limited feed intake of the pelleted diet.Both estimated crude protein and digestible energy fed were decreased (P<0.001) with HB inclusion (0.24±0.074g/d, and 2.88±0.040 MJ/d),respectively. Average daily gain also decreased linearly (P<0.001) by0.998±0.062 g/dper additional unit of HB. However, feed conversion ratio was not affected by HG inclusion(3.45±0.20 on average), nor was dressing proportions (56.25±0.42 %, on average).The reduction in digestible energy and crude protein caused by feeding HB resulted in ration levels lower than that recommended by the NRC (1966).The DE and crude protein levels in the feeding trial failed tomeet the rabbits’ requirements and impaired their performance.

Energy and protein are the most important factors required to obtain maximum weight gain (Lebas, 1989; Morales et al. 2009).It was proposed that a feed should contain a DE of about 10.5 MJ DE/ kg DM (Santomá, et al. 1989).They showed that optimum rabbit performance is expected when fed diets with DE levels of at least 9.5 MJ/kg DM. In this study the average daily crude protein and DE intake ranged from 15 to 28 g and 0.85 to 1.5 MJ (Fraga et al.1989) calculated that a rabbit with an average growth rate of 35 g/d required around 1.09 MJ/d and 17.3 g crude protein/d. According to this,the poor performance observed in rabbits fed the highest level of HB (60HB) could be explained by the deficit of DE and crude protein intake.However, the performance observed in other rabbits that fed with lower HB levels (20HB and 40HB) would not be explained by a crude protein or digestible energy deficiency but could be accounted for by the higher requirements of rabbits compared to levels recommended by other research. Similar findings were reported by Morales et al.(2009) and Huang et al. (1998)where poor rabbit's performance was found when fed diets with DE and crude protein levels within the recommended levels.De Blas et al. (1986) and Morales et al.(2009) reported that growth in rabbits decreases with diets with low levels of fiber. In this study, level of crude fiber was 15 % which is within the range recommended by other research(Blas et al. 1986). Similar findings were reported by Morales et al. (2009) where level of fiber was 13.5%and caused similar effects on rabbits when fed increasing levels of HB.

Inclusion of HB had variable effects on rabbits' visceral organs (table 4). Higher levels of HB inclusion (40 and 60%) caused a significant increase (P <0.05) in gall bladder and heart weights. Other visceral organs were not affected by HB feeding.