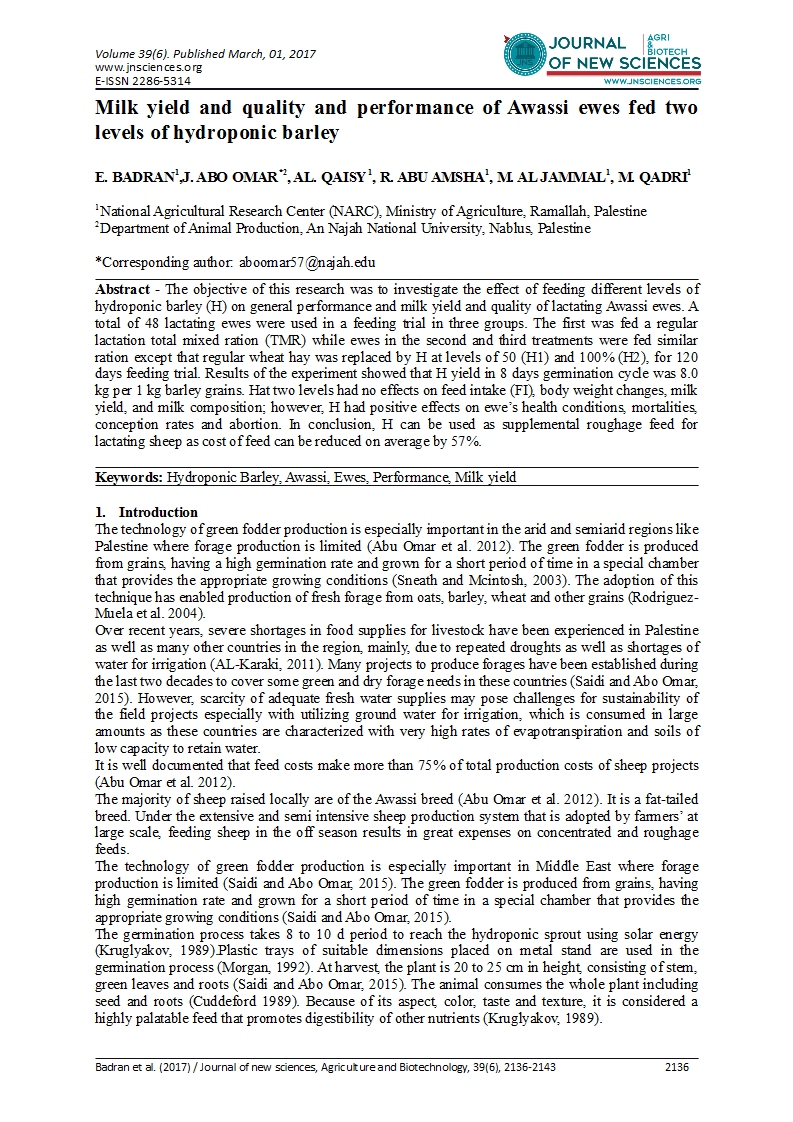 Abstract - The objective of this research was to investigate the effect of feeding different levels of hydroponic barley (H) on general performance and milk yield and quality of lactating Awassi ewes. A total of 48 lactating ewes were used in a feeding trial in three groups. The first was fed a regular lactation total mixed ration (TMR) while ewes in the second and third treatments were fed similar ration except that regular wheat hay was replaced by H at levels of 50 (H1) and 100% (H2), for 120 days feeding trial. Results of the experiment showed that H yield in 8 days germination cycle was 8.0 kg per 1 kg barley grains. Hat two levels had no effects on feed intake (FI), body weight changes, milk yield, and milk composition; however, H had positive effects on ewe’s health conditions, mortalities, conception rates and abortion. In conclusion, H can be used as supplemental roughage feed for lactating sheep as cost of feed can be reduced on average by 57%.

The technology of green fodder production is especially important in the arid and semiarid regions like Palestine where forage production is limited (Abu Omar et al. 2012). The green fodder is produced from grains, having a high germination rate and grown for a short period of time in a special chamber that provides the appropriate growing conditions (Sneath and Mcintosh, 2003). The adoption of this technique has enabled production of fresh forage from oats, barley, wheat and other grains (Rodriguez-Muela et al. 2004).

Over recent years, severe shortages in food supplies for livestock have been experienced in Palestine as well as many other countries in the region, mainly, due to repeated droughts as well as shortages of water for irrigation (AL-Karaki, 2011). Many projects to produce forages have been established during the last two decades to cover some green and dry forage needs in these countries (Saidi and Abo Omar, 2015). However, scarcity of adequate fresh water supplies may pose challenges for sustainability of the field projects especially with utilizing ground water for irrigation, which is consumed in large amounts as these countries are characterized with very high rates of evapotranspiration and soils of low capacity to retain water.

The majority of sheep raised locally are of the Awassi breed (Abu Omar et al. 2012). It is a fat-tailed breed. Under the extensive and semi intensive sheep production system that is adopted by farmers’ at large scale, feeding sheep in the off season results in great expenses on concentrated and roughage feeds.

The technology of green fodder production is especially important in Middle East where forage production is limited (Saidi and Abo Omar, 2015). The green fodder is produced from grains, having high germination rate and grown for a short period of time in a special chamber that provides the appropriate growing conditions (Saidi and Abo Omar, 2015).

The germination process takes 8 to 10 d period to reach the hydroponic sprout using solar energy (Kruglyakov, 1989).Plastic trays of suitable dimensions placed on metal stand are used in the germination process (Morgan, 1992). At harvest, the plant is 20 to 25 cm in height, consisting of stem, green leaves and roots (Saidi and Abo Omar, 2015). The animal consumes the whole plant including seed and roots (Cuddeford 1989). Because of its aspect, color, taste and texture, it is considered a highly palatable feed that promotes digestibility of other nutrients (Kruglyakov, 1989).

The adoption of this technique has enabled production of fresh forage from oats, barley, wheat and other grains(Morgan, 1992). Limited research has been conducted on the feeding value of sprouted grain especially to lactating ewes.

This study was undertaken to determine the effect of hydroponic barley (H) as a green fodder on the performance and milk yield and quality of lactating Awassi ewes under Palestinian conditions.

The production of H was conducted as described by Saidi and Abo Omar, (2015) at the project site, National research Center (NARC), Jenin city, Palestine.

Barley (Hordeumvulgare) grains were obtained from the local market of Jenin city, Palestine. Seeds were subjected to a germination test to check for their viability before being used; the result of the germination test was 80%.

Seeds were cleaned from debris and other foreign materials. Then the cleaned seeds were sterilized by soaking for 30 minutes in a 20% sodium hypochlorite solution to control the formation of mould. Planting trays were also cleaned and disinfected. The seeds were then washed well from residues of bleach and resoaked in tap water overnight (about 12 hours) before planting.

Seeds of were sown in the planting trays which have holes at the bottom to allow drainage of excess water from irrigation. The seeding rates used in this experiment were about 1000 g of barley grain per tray. Trays were irrigated manually with tap water twice a day (early in the morning and late in the afternoon) at a fixed rate of 500 ml/tray/day. Drained water out of irrigation was collected in plastic containers which were placed under each planting tray and measured.

After 8 days from seeding, the fodder total fresh and dry fodder yields were recorded and ratio of produced green fodder: initial planted seeds weight was calculated. A representative fresh plant samples (about 200 grams) from every tray were taken at harvest, oven-dried at 70˚C for 48 hours, and weighed to compute the moisture content. Fodder samples were collected from d-3 to d-8 of germination for later chemical analysis. Costs of inputs (barley grain, water, electricity, labor) were recorded then cost of kg HB was calculated.

The green barley fodder was fed as part of total mixed ration (TMR) (Table 1).Ewes were randomly divided into three experimental groups with 12 ewes in each group and 6 replicates for each experimental group in a complete randomized design. Group 1 served as control group and fed a regular lactation diet. Ewes in group 2 were fed a total mixed ration where (H) was incorporated at 50% of wheat hay while ewes in the third group were fed 100% H with no wheat hay(Table 1). Rations fed to ewes were formulated to meet the recommended requirements by the NRC (1984).Daily feed intake was recorded along with feed refusal. Feed and refusal samples were taken for later analysis.

Ewes’ body weight was monitored on biweekly basis. Milk production was measured daily. Milk samples were collected weekly for milk quality assessment. The duration of the performance trial was 120 days.

Analysis of variance was performed using the Statistical Analysis System (SAS, 2000). Differences among the means were determined by the Duncan’s multiple range test with a significance defined at P < 0.05 (SAS, 2000).

Results of this study showed that using a simple hydroponic technique can produce 8 kg of green fodder in an 8-day production cycle. The net green product was 8 kg H/kg barley grains. This value is similar to that reported previously (AL-Karaki, 2012; Mukhopad,1994; Saidi and Abo Omar, 2015). However, Kruglyakov (1989)reported a production up to 10 kg of fresh green fodder out of 1 kg of barley seeds. The H yield depends on type of grain and the growing conditions(Peer and Leeson 1985;Saidi and Abo Omar, 2015;Shtaya, 2004) of grain. It was reported by previous research that 1 kg of barley grains produced a fodder yield ranging from 7 to 10 kg (Peer and Leeson, 1985; Mukhopad, 1994) indicating that barley and wheat were the most appropriate.

The calculated production cost per 1 kg H is 0.22 NIS. Compared to the traditional roughage regularly fed to sheep there is a saving of about 0.76NIS/kg. The cost per ton of rations used in the feeding trial was 1448, 773 and473 NIS for the control, H1 and H2 rations, respectively. This cost was calculated based on the cost of the individual ingredients of the rations used in the experiment.

There are some arguments about the use of the sprouting grains for convenience of green forage production in hydroponics system to be as part of feed in livestock feeding systems (Prasad, 1998; Tudor, 2003; Shtaya, 2004). Sole feeding of green fodder did not support the expected production traits in the animals whereas feeding in conjunction with dry fodder improved its utilization (Shtaya, 2004).

However, results were not consistent. These authors noted that the dry matter (DM) intake of green fodder by feedlot cattle and dairy cattle were low due to its high moisture content. However, Tudor et al. (2003)reported an improvement in the performance of steers when given restricted hay diet plus 15.4 kg fresh hydroponics green fodder (about 1.8 kg added DM). It can be concluded that the biological and economical viabilities of production of green fodder will depend on sprouting systems, type and quality of the grain, particularly the germination rate, culturing conditions, management, and the local conditions (AL-Karaki, 2011).

The feed intake was similar by ewes under the feeding treatments. However, the observed intake in this experiment was similar to what was reported from previous research (Shtaya, 2004; Saidi and Abo Omar, 2015) where ewes fed similar level of H.

The H had no effect on ewes’ average weight. Although level of CP in the H ration was lower than the level recommended by NRC, ewes’ performance was positive. This might be due to the effects of increased nutrients and the low antinutritional factors in HB. Tudor et al.(2003) reported that most of the trials on livestock performance from hydroponic sprouts show no advantage to including them in the diet, especially when it replaces highly nutritious feeds such as grain. Cuddeford, (1985) describes some possible advantages of hydroponic sprouts for horses. Morgan et al.(1992) found that pigs fed 4-day-old sprouts gained significantly less weight than those fed barley grain.

Milk yield and milk composition are presented in figures 1-5. Milk yield was not affected by H feeding. Milk protein, milk fat, total solids (TS), solids not fat (SNF) and lactose were also not affected by feeding H. Numerical differences in these parameters were observed among treatments but were not significant. Milk components were not depressed by consuming H. this is in agreement with previous results (Shtaya, 2004; Saidi and Abo Omar, 2015). The milk yield obtained from ewes at different treatments were relatively low. This can be explained by that the experimental ewes were weeks after initiation of lactation. However, milk yield observed in this study was similar to other findings reported by previous research when ewes fed H at similar levels to current experiment (Saidi and Abo Omar, 2015) but lower compared to what was reported by Shtaya (2004). Fazaeliet al. (2012) showed that replacing 50% of the maize silage with 18 kg of hydroponic barley grass increased cows’ milk yields by 8.7% although milk fat was depressed. Naik et al. (2012) reported green fodder resulted in slight increase in milk fat.

The rate of conception was the same in ewes in different feeding treatments. No cases of abortion were observed in the experimental ewes. Adequate levels of vitamin A (carotene) might be the explanation of maintaining pregnancy while consuming this type of diet. No signs of disease or health problem were observed during the feeding trial. The survival rate in experimental ewes was 100%.

H can replace regular roughages in lactating rations as part of total mixed rations. No negative effects on ewe’s body conditions and productivity were observed. However, significant reduction in feed cost can be achieved when feeding rations incorporated with H. More research is needed to confirm results.

AL-Karaki GN (2011) Utilization of Treated Wastewater for Green Forage Production in a Hydroponic System. Emirates Journal of Food and Agriculture, 23: 80-94.

Kruglyakov Yu A (1989) Construction of Equipment for Growing Green Fodder by a Hydroponic Technique. Traktory- I Sel’skokhozyaistvennyeMashiny, 6: 24-27.

Rodriguez-Muela C, Rodriguez HE, Ruiz O, Flores A, Grado JA, ArzolaC (2004)Use of Green Fodder Produced in Hydroponic System as Supplement for Lactating Cows during the Dry Season. Proceedings of the American Society of Animal Science,56: 271-274.