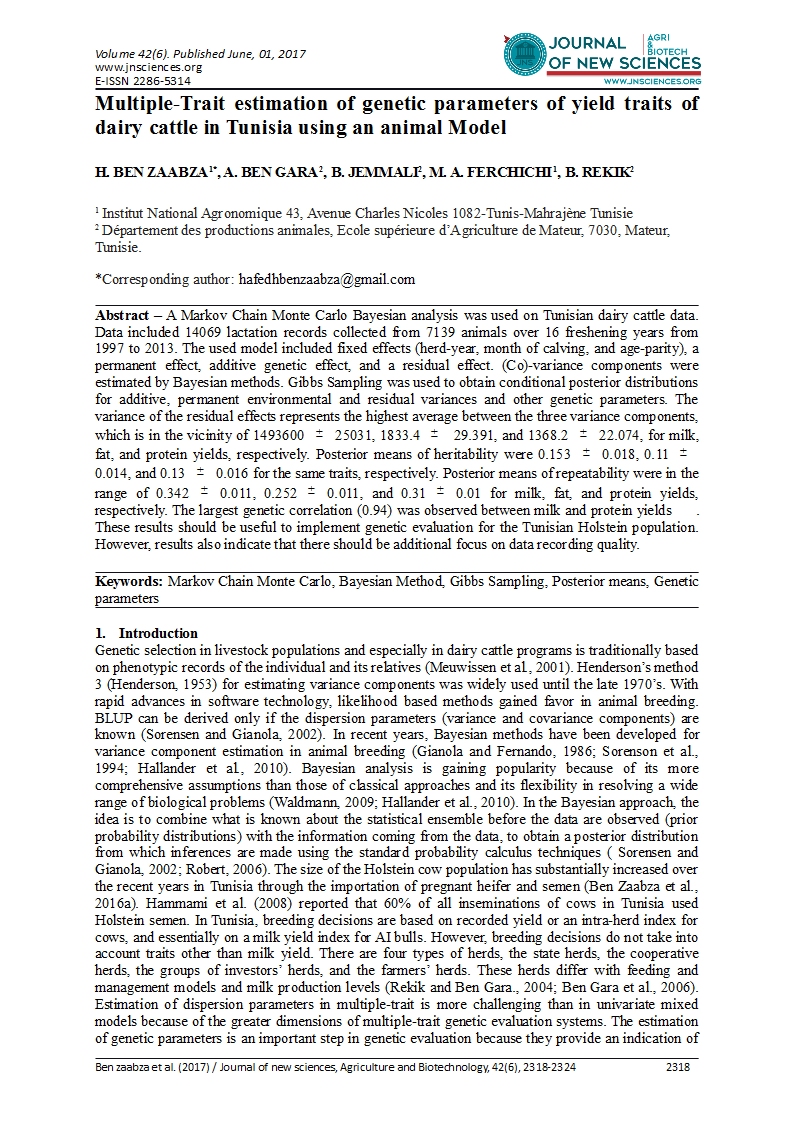 Abstract – A Markov Chain Monte Carlo Bayesian analysis was used on Tunisian dairy cattle data. Data included 14069 lactation records collected from 7139 animals over 16 freshening years from 1997 to 2013. The used model included fixed effects (herd-year, month of calving, and age-parity), a permanent effect, additive genetic effect, and a residual effect. (Co)-variance components were estimated by Bayesian methods. Gibbs Sampling was used to obtain conditional posterior distributions for additive, permanent environmental and residual variances and other genetic parameters. The variance of the residual effects represents the highest average between the three variance components, which is in the vicinity of 1493600 25031, 1833.4 29.391, and 1368.2 22.074, for milk, fat, and protein yields, respectively. Posterior means of heritability were 0.153 0.018, 0.11 0.014, and 0.13 0.016 for the same traits, respectively. Posterior means of repeatability were in the range of 0.342 0.011, 0.252 0.011, and 0.31 0.01 for milk, fat, and protein yields, respectively. The largest genetic correlation (0.94) was observed between milk and protein yields . These results should be useful to implement genetic evaluation for the Tunisian Holstein population. However, results also indicate that there should be additional focus on data recording quality.

Genetic selection in livestock populations and especially in dairy cattle programs is traditionally based on phenotypic records of the individual and its relatives (Meuwissen et al., 2001). Henderson’s method 3 (Henderson, 1953) for estimating variance components was widely used until the late 1970’s. With rapid advances in software technology, likelihood based methods gained favor in animal breeding. BLUP can be derived only if the dispersion parameters (variance and covariance components) are known (Sorensen and Gianola, 2002). In recent years, Bayesian methods have been developed for variance component estimation in animal breeding (Gianola and Fernando, 1986; Sorenson et al., 1994; Hallander et al., 2010). Bayesian analysis is gaining popularity because of its more comprehensive assumptions than those of classical approaches and its flexibility in resolving a wide range of biological problems (Waldmann, 2009; Hallander et al., 2010). In the Bayesian approach, the idea is to combine what is known about the statistical ensemble before the data are observed (prior probability distributions) with the information coming from the data, to obtain a posterior distribution from which inferences are made using the standard probability calculus techniques ( Sorensen and Gianola, 2002; Robert, 2006). The size of the Holstein cow population has substantially increased over the recent years in Tunisia through the importation of pregnant heifer and semen (Ben Zaabza et al., 2016a). Hammami et al. (2008) reported that 60% of all inseminations of cows in Tunisia used Holstein semen. In Tunisia, breeding decisions are based on recorded yield or an intra-herd index for cows, and essentially on a milk yield index for AI bulls. However, breeding decisions do not take into account traits other than milk yield. There are four types of herds, the state herds, the cooperative herds, the groups of investors’ herds, and the farmers’ herds. These herds differ with feeding and management models and milk production levels (Rekik and Ben Gara., 2004; Ben Gara et al., 2006). Estimation of dispersion parameters in multiple-trait is more challenging than in univariate mixed models because of the greater dimensions of multiple-trait genetic evaluation systems. The estimation of genetic parameters is an important step in genetic evaluation because they provide an indication of the capacity of a population to respond to selection, and thus, the potential of that population to evolve (Thomson and Hill, 2000a; Thomas et al., 2000b). The purpose of this study was to estimate genetic parameters of fat, protein, and milk yields in a multiple trait animal model using Bayesian analysis approach.

Data were provided by the National Centre for Genetic Improvement at Sidi Thabet, Tunis. Data consisted of 25765 completed lactation records collected from 1997 through 2013 on 9261 Holstein cows in 11 herds. All records included 305-d milk, fat, and protein yields. Each record included the international identification number, herd code, lactation number, calving date, milk yield, fat and protein percentages. The pedigree file included the sire, the dam, the date of birth, and the herd of origin for each animal. After editing for missing identification number, and unreasonable production levels for daily milk yield (<1.0 and > 50 kg), fat content (< 1.5% and > 5% and protein percentage (< 1% and >5%), 14069 records remained on 7193 cows sired by 326 bulls. Description of data structure is shown in table 1.

The used mixed linear model for 3 traits y, z, and t in matrix notation was as follows:

The conditional distribution of the complete data for each individual, given the parameters, is assumed to be multivariate normal and can be written as

where contains y, z, and t. We shall assume that records have been sorted by individual, so that Q is a sequence of y, z, and t for each individual. Hence, the sorting is such that the residual variance–covariance matrix can be written a block diagonal matrix with n sub-matrices of residual co-variances , where =

Prior distributions are needed in Bayesian modeling. For the vector β, a proper uniform distribution is assigned, with density

The vector of additive genetic values is assumed to follow, a priori, the multivariate normal distribution.

where k = 3. In these expressions, and Vi (i=e, p, a) are hyperparameters of the distributions, which are assumed known. The marginal distribution for each parameter is found via integration of multivariate density functions using a Gibbs sampling technique as developed by Sorensen and Gianola (2002).

In a standard multiple-trait analysis, all full conditional distributions needed for Bayesian implementation of a MCMC algorithm, such as the Gibbs sampler (García-Cortés and Sorensen, 1996; Waldmann et al., 2009). Variance components were estimated with a Bayesian approach via the Gibbs sampling algorithm as implemented by Misztal et al. (2002). Posterior means of variance components, heritability, and correlation estimates were obtained using 50,000 samples. After a burn-in of 5000 samples, and then one out of 10 iterations was kept for subsequent analysis Thus, a total of 4500 samples were saved. Convergence of Gibbs chains was monitored by inspection of plots related to selected parameters.

Genetic parameters of milk, fat, and protein yields were estimated for Tunisian Holsteins using a Multivariate Bayesian analysis. Heritability and repeatability were moderate but similar to previous literature estimates from studies that used a comparable model in the same population, indicating the possibility of a satisfactory response to selection for these production traits in Tunisian Holsteins. Genetic parameters estimates in this study might be used in the official genetic evaluation for production traits for Tunisian Holsteins.

The authors wish to acknowledge the Tunisian Livestock and Pasture Office for providing data. Sincere gratitude to Dr H. Hammami for help with numerous computational problems and for invaluable advice on numerous occasions.