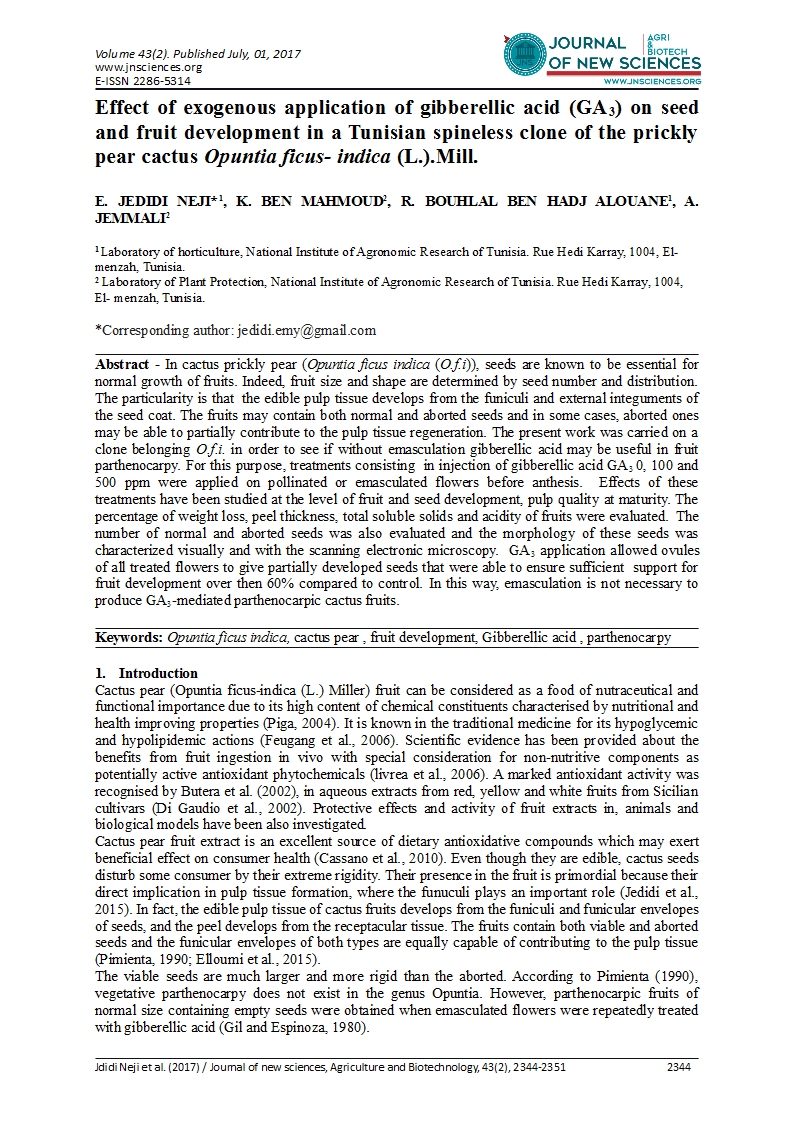 Abstract - In cactus prickly pear (Opuntia ficus indica (O.f.i)), seeds are known to be essential for normal growth of fruits. Indeed, fruit size and shape are determined by seed number and distribution. The particularity is that the edible pulp tissue develops from the funiculi and external integuments of the seed coat. The fruits may contain both normal and aborted seeds and in some cases, aborted ones may be able to partially contribute to the pulp tissue regeneration. The present work was carried on a clone belonging O.f.i. in order to see if without emasculation gibberellic acid may be useful in fruit parthenocarpy. For this purpose, treatments consisting in injection of gibberellic acid GA3 0, 100 and 500 ppm were applied on pollinated or emasculated flowers before anthesis. Effects of these treatments have been studied at the level of fruit and seed development, pulp quality at maturity. The percentage of weight loss, peel thickness, total soluble solids and acidity of fruits were evaluated. The number of normal and aborted seeds was also evaluated and the morphology of these seeds was characterized visually and with the scanning electronic microscopy. GA3 application allowed ovules of all treated flowers to give partially developed seeds that were able to ensure sufficient support for fruit development over then 60% compared to control. In this way, emasculation is not necessary to produce GA3-mediated parthenocarpic cactus fruits.

Cactus pear (Opuntia ficus-indica (L.) Miller) fruit can be considered as a food of nutraceutical and functional importance due to its high content of chemical constituents characterised by nutritional and health improving properties (Piga, 2004). It is known in the traditional medicine for its hypoglycemic and hypolipidemic actions (Feugang et al., 2006). Scientific evidence has been provided about the benefits from fruit ingestion in vivo with special consideration for non-nutritive components as potentially active antioxidant phytochemicals (livrea et al., 2006). A marked antioxidant activity was recognised by Butera et al. (2002), in aqueous extracts from red, yellow and white fruits from Sicilian cultivars (Di Gaudio et al., 2002). Protective effects and activity of fruit extracts in, animals and biological models have been also investigated.

Cactus pear fruit extract is an excellent source of dietary antioxidative compounds which may exert beneficial effect on consumer health (Cassano et al., 2010). Even though they are edible, cactus seeds disturb some consumer by their extreme rigidity. Their presence in the fruit is primordial because their direct implication in pulp tissue formation, where the funuculi plays an important role (Jedidi et al., 2015). In fact, the edible pulp tissue of cactus fruits develops from the funiculi and funicular envelopes of seeds, and the peel develops from the receptacular tissue. The fruits contain both viable and aborted seeds and the funicular envelopes of both types are equally capable of contributing to the pulp tissue (Pimienta, 1990; Elloumi et al., 2015).

The viable seeds are much larger and more rigid than the aborted. According to Pimienta (1990), vegetative parthenocarpy does not exist in the genus Opuntia. However, parthenocarpic fruits of normal size containing empty seeds were obtained when emasculated flowers were repeatedly treated with gibberellic acid (Gil and Espinoza, 1980).

The major uses of gibberellins (GA3) applied as a spray or dip, are to manage fruit crops to increasing sugar yield in sugarcane and fruit production in some seedless varieties (Pandofini, 2009). In some other cases, seedless fruit is generally smaller and more elongated than seeded fruit, and differences in total soluble sugars, acidity and fruit colour at harvest have been reported among cultivars (Goubran and El-Zeftawi, 1986; Erogul and Sen, 2015). In cactus pear, GA3 is known to inhibit seed development (Mejia and Cantwell, 2003). Therefore, we realized the present work in order to use this property in producing parthenocarpic fruits without emasculation, since emasculation is very expensive for commercial purpose.

This work has been carried on O.f.i spineless clone N°69264 growing in a cactus experimental field belonging to the National Institute of Agronomic Research of Tunisia. Mature fruits of this clone are green- yellow. Pulp is yellow juicy and contain numerous hard seeds.

They consist in GA3 injection (Fig.1) into flowers via their pistil channel, two days before anthesis. Concomitantly, flowers are emasculated or not. Emasculated ones are bagged to prevent accidental pollination. Regarding GA3 doses and emasculation operation, there were a total of 6 treatments named as follows.

Fruits were collected at maturity (green -yellow peel). A total of 30 fruits (3 replications of 10 fruits each) per treatments were observed for morphological (fruit weight, length and width, pulp weight and thickness, peel thickness, seed number and weight) and qualitative traits (Total solid extracts and acidity).

Fruits were observed individually. Pulp juice was obtained by the mean of a kitchen blender and filtrated before Brix and pH measures.

Each treatment has been applied on 30 flowers on a separated single plant.

Data were expressed as means ± standard error. One way ANOWA analysis followed by Newman-Keuls test was used to determine significant differences at P≤0.05. All the statistical analysis was done using the STATITCA (Version 09).

For all developmental parameters, GA3 treatments coupled or not with flower emasculation caused decrease ranging between 20 and 30%, except pulp weight where decreasing reached 43%. Because T1 treatment (emasculation + 0ppm GA3) resulted in a total development failure of the fruits in all their parts, it will not be considered in the following comparison.

Mean values fluctuate from 20.68g (emasculation+0ppm GA3) to 76.31 g (control). Apart T1, all treatments including GA3 either with emasculation or not, are not significantly different at P ≤0.05, but they were significantly inferior to the control (76.31g).

Mean values varies from 3.6 cm (T1: emasculated +0ppm GA3) to 5.21 (Emasculated +500 ppm GA3). Significant difference is noted between T5 and all remaining treatments including the control.

GA3 application causes a 25% decrease in fruit width in all treatments compared to T0.

Decrease of this parameter was the most important (43%) in all GA3 treatments.

It follows the same tendency of the previous parameters, decrease reached approximatively 33%.

In contrast to all other developmental fruit parameters, peel thickness is the lowest in the control treatment. It represents only 54% of T2 treatment (pollinated+100 ppm GA3).

Effect of GA3 injection in flowers is revealed by the mean number of seeds and weight/ fruit, including normal and aborted ones. Corresponding results (Fig.3) show that untreated fruits contain the highest proportion (93.43%) of normal seeds than all other GA3 treated fruits where this proportion does not exceed 22% in T3 treatment (emasculated +100 ppm GA3).

Mean weight / seed follows the same tendency of the previous parameter (number of normal and aborted seeds), indeed the highest weight (10 mg ± 2.2 mg) is reported in T0 treatment, and the lowest in T5 (2 mg ±0.70 mg).

Morphological and color appearance (Fig.4) of produced seeds are drastically influenced by GA3 treatment and flower emasculation (Fig .4B). In T0, seeds are whitish (Fig.4.B-1) and become brownish under GA3 application (Fig.4B-2-4-5). They are partially affected (Fig.4B-3) in T4 treatment where flowers are 500 ppm GA3 treated and open pollinated at 500 ppm.

Seed size and hardness decreased with GA3 application. Scanning Electron Microscopy observation (Fig.4C) confirms the general feature described above. Indeed, a normal seed in T0 shows well developed aril tegument and embryo. In other cases, seeds are empty, lacking embryo and aril (Fig.4C.2-4-5), except in T4 where they have preserved partial embryo and aril development (Fig.4C-3).

Data recorded in figure 5 shows that the most important organoleptic parameters were not significantly affected by GA3 treatments coupled or not with emasculation. pH weaves around 6 for all treatments, Brix ranged between 10 and 14.

Prickly pear fruit is largely consumed over the world, but the omnipresence of seeds in its pulp may limit its acceptance by some consumers. In order to improve this acceptance, several works have been achieved on fruit setting and development under parthenocarpic experiments. Although parthenocarpic fruits are seedless, in cactus fruits seeds can not be avoided (Weiss et al, 1993; Barbera et al, 1994 ; Mejia and Cantwell, 2003 ; Reyes-Agüero et al., 2006).

Because true parthenocarpic process is quietly absent in cactus pear, attempts based on GA3 role in fruit development and parthenocarpy in many other species (Stösser and Anvari, 1982; Talon et al, 1990; Mesejo et al., 2008), have been in made to develop prickly pear fruits with increased pulp or reduced seed size and number (Gil and Espiniosia, 1979; Weiss et al., 1993; Inglese, 1997).

In practice, GA3 is individually administrated by pulverization or by injection in unopened flowers. This operation is laborious and expensive. Alternative solution may be restricted to the use of GA3 without emasculation, since this hormone is reported to inhibit seed development (Varoquaux et al, 2000). In this regard, results obtained in the present study showed the possibility to produce the same type of fruits either with emasculation or without.

All developmental and organoleptic parameters have been partially conserved with a significant reducing of seed hardness and size. In this case, GA3 played its function concerning development of parthenocarpic fruits (Richards, 2003).

The last observations on seeds confirm the inhibitory effect of GA3 even in presence of pollination. Or, in regular situation, normal seed development depends on a integrated reproductive process that includes fertilization, embryogenesis and endosperm development (Rojas-Archiga and Vasquez-Yanes , 2000; Cisneros et al., 2011). Seed abortion can be explained by the lack of chromosomal DNA, which caused a consequential chromosome imbalance or by an abnormal development of endosperm (Yang et al. 2004). This means that GA3 acted by disturbing this process by a mechanism that may be explored at the molecular level.

Despite the considerable loss in pulp weight compared to the normal development process (pollination without GA3 application), reducing in seed size and hardness by GA3 application is an encouraging accomplishment. Regards to GA3concentration, fruit size was lower than in the case of controlled pollinated flowers, but the 500 ppm treatment seemed to be more favorable to fruit development than 100 ppm. Further improvement in pulp weight may be obtained by optimization of GA3 doses and application stages without having recourse the flower emasculation which is a very laborious and expensive manipulation. In this connection, gibberellic acid application plays a double role that consists in both seed inhibition and pulp regeneration by the funicular outer tegument. Seed inhibition process by gibberellic acid has been previously mentioned in related publication. Some of them attributed this inhibition to the male sterility caused by gibberellic acid (Kumar and Diwivedi, 2014).

In cactus pear, the dual implication of the funiculi in seed coat and pulp formation make interpretation of the GA3 action more complicated. In this regard, we have realized an anatomical investigation on seed phenolgy that may give suitable information on the potential changes in embryo and other tissues of the treated seeds.