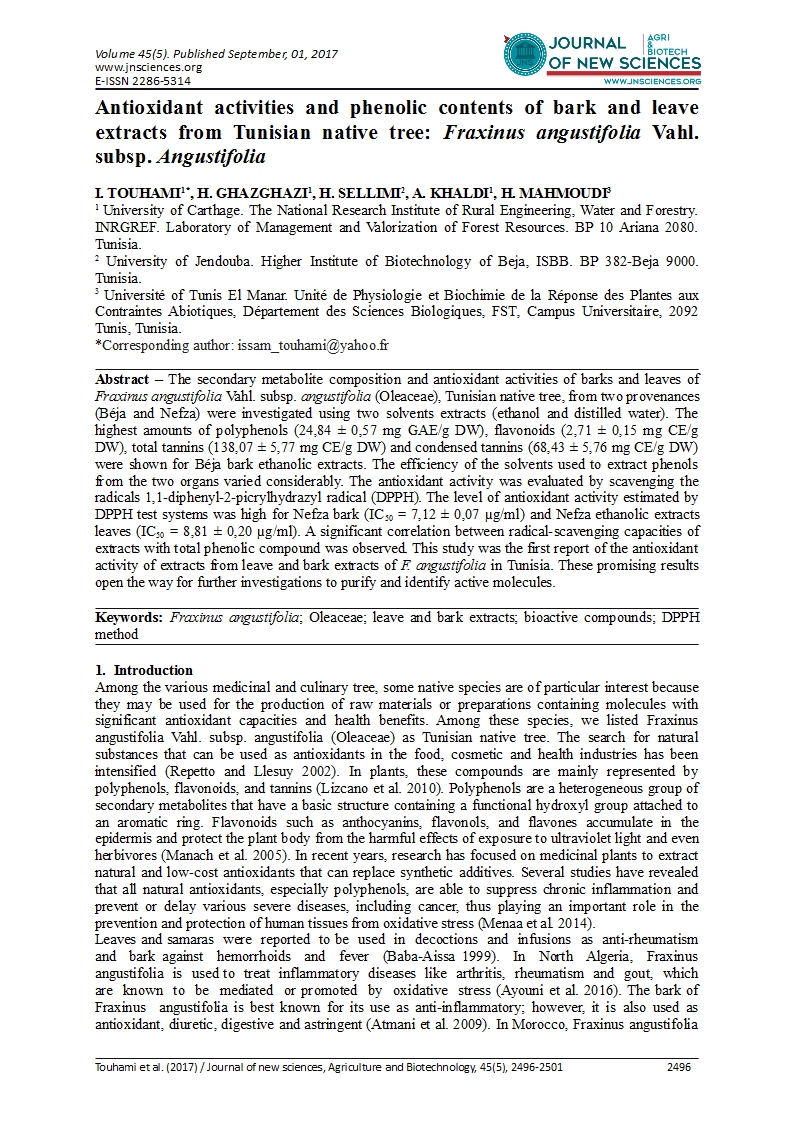 Among the various medicinal and culinary tree, some native species are of particular interest because they may be used for the production of raw materials or preparations containing molecules with significant antioxidant capacities and health benefits. Among these species, we listed Fraxinus angustifolia Vahl. subsp. angustifolia (Oleaceae) as Tunisian native tree. The search for natural substances that can be used as antioxidants in the food, cosmetic and health industries has been intensified (Repetto and Llesuy 2002). In plants, these compounds are mainly represented by polyphenols, flavonoids, and tannins (Lizcano et al. 2010). Polyphenols are a heterogeneous group of secondary metabolites that have a basic structure containing a functional hydroxyl group attached to an aromatic ring. Flavonoids such as anthocyanins, flavonols, and flavones accumulate in the epidermis and protect the plant body from the harmful effects of exposure to ultraviolet light and even herbivores (Manach et al. 2005). In recent years, research has focused on medicinal plants to extract natural and low-cost antioxidants that can replace synthetic additives. Several studies have revealed that all natural antioxidants, especially polyphenols, are able to suppress chronic inflammation and prevent or delay various severe diseases, including cancer, thus playing an important role in the prevention and protection of human tissues from oxidative stress (Menaa et al. 2014).

Leaves and samaras were reported to be used in decoctions and infusions as anti-rheumatism and bark against hemorrhoids and fever (Baba-Aissa 1999). In North Algeria, Fraxinus angustifolia is used to treat inflammatory diseases like arthritis, rheumatism and gout, which are known to be mediated or promoted by oxidative stress (Ayouni et al. 2016). The bark of Fraxinus angustifolia is best known for its use as anti-inflammatory; however, it is also used as antioxidant, diuretic, digestive and astringent (Atmani et al. 2009). In Morocco, Fraxinus angustifolia Vahl. is used for many other traditional purposes to treat pathologies of the digestive system, in dermocosmetology and problems of the nervous system (Fakchich and Elachouri 2014). Therefore, this present study was designed to investigate total phenolic contents, antioxidant activity, free radical scavenging potentials of leaves and bark extracts of Fraxinus angustifolia Vahl. subsp. angustifolia from two provenances belonging different bioclimatic areas in Tunisia. The detected variability will be interpreted.

For each sample, 1 g of the air-dried aerial parts, finely ground with a blade-carbide gringing (IKAWERKType: A:10), was extracted with 10 ml of pure methanol for 24 h in a water bath shaker maintained at room temperature. The extract was filtered using a Whatman No. 4 filter paper and stored in a brown bottle at 4°C prior to further.

Water extract: 10 g of the weighed plant leaves powder was soaked in 100 ml of boiled hot water. That mixture was boiled for thirty minutes into a conical flask and put for 24hrs. The extract was filtered using filter paper.

Phenolic content was assayed using the Folin-Ciocalteu reagent using the method of Lister and Wilson (2001). This method was employed to evaluate the phenolic content of the samples. A calibration curve of gallic acid (ranging from 0.005 to 0.05 mg/ml) was prepared, and the results, determined by the regression equation of the calibration curve (y= 10,19x-0.01; R= 0.97), were expressed as mg gallic acid equivalents per gram dry weight of raw material (mg GAE g-1 DW). In this methods, 100 μl of sample (diluted to obtain absorbance in the range of the prepared calibration curve) were dissolved in 500 μl (1/10 dilution) of the Folin-Ciocalteu reagent and 1 ml of distilled water. The absorbance of all samples was measured at 760 nm using a HACH UV-Vis spectrophotometer (Hach DR 6000, Germany). Triplicate measurements were taken for each sample.

The amount of flavonoid content was measured using the method described by Dewanto et al. (2002). Total flavonoids were expressed as mg quercetin equivalent per gram DW (mg CE g-1 DW), through the calibration curve of quercetin (y= 46,78x-0.022; R= 0.98). The calibration curve range was 0-400 µg ml-1. All samples were analyzed in triplicate.

2.4.3. Determination of condensed and total tannins

The quantification of total antioxidant activity was determined by a colorimetric assay using a method described by Prieto et al. (1999). An aliquot (0.1 ml) of leaves fraction was combined to 1 ml of reagent solution (0.6 M sulfuric acid, 28 mM sodium phosphate and 4 mM ammonium molybdate). The tubes were incubated at 95 °C for 90 min. After the mixture had cooled to room temperature; the absorbance of each solution was measured at 765 nm (Anthelie Advanced 2, SECOMAM®) against a blank. The antioxidant capacity was expressed as mg gallic acid equivalent per gram of dry weight (mg GAE/g DW) through the calibration curve of gallic acid (y= 0,176x-0,041; R= 0.99).

In this part of our work, the in vitro antioxidant activities of leaf and bark extracts have been evaluated based on DPPH test. The DPPH radical scavenging capacity was measured according to Hanato et al. (1988) with modifications (Ghazghazi et al. 2014). The absorbance was measured at 517 nm and corresponded to the ability of extract to reduce the stable radical DPPH to the yellow-colored 2,2 diphenyl-1-picrylhydrazine. The antiradical activity was expressed as IC50 (µg/ml), the extract dose required to induce a 50 % inhibition. A lower IC50 value corresponds to a higher antioxidant activity of plant extract. The ability to scavenge the DPPH radical was calculated using the following equation:

Statistical analysis of all data was performed using (IBM® SPSS® Statistics 20). A one-way analysis of variance (ANOVA) was carried out. All data was expressed as mean ± Standard Error (SE) of three replicates. Correlation between phenolic contents and antioxidant activities was ascertained by Pearson Matrix.

The total phenolic, flavonoid, and tannins contents varied significantly among the studied parts in the different extracts of the studied species (Table 1). The concentration of phenolic compounds in Fraxinus angustifolia Vahl. subsp. angustifolia were evaluated among two studied sites. Barks of Béja, determined in ethanol extract, had the highest contents of polyphenols, flavonoids, total tannins and condensed tannins: 24,84 ± 0,57 mg GEA/g DW, 2.71 ± 0,15 mg CE/g DW, 138,07 ± 5,77 mg CE/g DW, and 68,43 ± 5,77 mg CE/g DW, respectively. We can easily conclude that F. angustifolia is poor in flavonoids. These values were much lower than those observed for Algerian Fraxinus angustifolia Vahl. (Atmani et al. 2009; Ayouni et al. 2016). For exemple, Atmani et al. (2009) was found a higher level of total polyphenols, flavonoids and tannins contents in the aqueous extracts of F. angustifolia barks 215,7 mg CE/g DW; 4,93 mg Eq Quercetin/g DW; and 177,22 mg Tannic Acid/g DW, respectively. However, Ayouni et al. (2016) reported similar values of flavonoids and tannins contents in aqueous crude extracts of Algerian F. angustifolia leaves and bark. While these results are not far from ours, discrepancies can be explained by the genetic difference between the species, the type of soil and microclimate.

Our result exhibited significant differences in content of polyphenols, flavonoids, total and condensed tannins according to the solvent extracting. The ethanolic extract was the richest one as compared to the aqueous fractions from both plant parts (see Table 1). A significant difference (p<0.05) between Béja and Nefza provenances was detected specially for barks part according to ethanolic extract. Likewise, the significant variability between the fractions, in the phenolic compounds, may be attributed to the extracting power of the solvent used and its chemical nature, structure, degree of polymerization and the interaction of these compounds with each other (Saada et al. 2014). Then, the differential accumulation of these compounds between organs should be related to their specific tissues and cells (i.e. mesophyll, epiderm, thickness cuticle, chloroplasts, trichomes). Previous reports have attributed the high presence in barks of these compounds and their low content in leaves to the close interaction between organs and to the different processes of biosynthesis and/or degradation, to the transport involved in the distribution of these polyphenols at the plant level and to the phenological organ growth (Fico et al. 2000; Hudaib et al. 2002).

Our results demonstrated that the total antioxidant activity (TAA) of F. angustifolia was important from leaves and barks among ethanolic extracts with high values from Nefza barks in comparison to all tested samples (716,29 ± 17,64 mg EAG/g DW).

Several antioxidant methods have been proposed to evaluate the free radical scavenging capability of plant materials and to explain antioxidant mechanisms and actions. Among these, free synthetic radical scavenging like DPPH test was used for the evaluation of the total antioxidant behavior of extracts. Ethanol extracts of F. angustifolia barks exhibited enhanced TAA (in the order of 716,29 ± 17,64 mg EAG/g DW) compared with the other barks extracts (aqueous) using a total antioxidant activity assay (Figure 2a). In fact, Ethanol extracts from leaves and barks of tow provenances of F. angustifolia showed the lowest IC50 radical scavenging value, indicating high antioxidant activity with IC50 7,12 ± 0,07 µg/ml from bark of Nefza (Figure 2b). Atmani et al. (2009) reported similar values with aqueous fraction issued from ethyl acetate and chloroform extractions (IC50 =10,0 µg/ml and IC50 =10,04 µg/ml), respectively. Another investigation involving in medicinal plants showed that the DPPH scavenging activity of the methanol extract of Fraxinus excelsior is higher than that of hexane and dichloromethane extracts, suggesting that the hydrogen-donating compounds are more likely to be present in polar solvents (Middleton et al. 2005).

Extracting solvent affected significantly the phenolic compounds and antioxidant activities of several extracts. The most efficient solvents extraction was ethanol extracts may be related to the presence of flavonoid-type compounds and other phenolics. So, the high contents of polyphenol compounds in the studied species contribute to their important antiradical and antioxidative activities. According to Zhang et al. (2011), the antioxidant activity is generally attributed to phenolic and flavonoid compounds in plant extracts.

The present study provides the first investigation on phenolic contents and antioxidant activities of various extracts from leaves and barks of Fraxinus angustifolia Vahl. subsp. Angustifolia, native species from Tunisia. Our results clearly showed that the barks was the organ which gives the highest level in polyphenol, flavonoid, total and condensed tannins contents which favor them in industrial use for extraction.

Also, we can conclude that barks ethanolic extracts with higher antioxidant capacity (IC50 = 7,12 ± 0.07 µg/ml by DPPH assay and 716,29 ± 17,64 mg EAG/g DW by TAA) could be considered as good sources of natural antioxidant. All those results emphasize the importance of the chemical composition of this Tunisian native species.