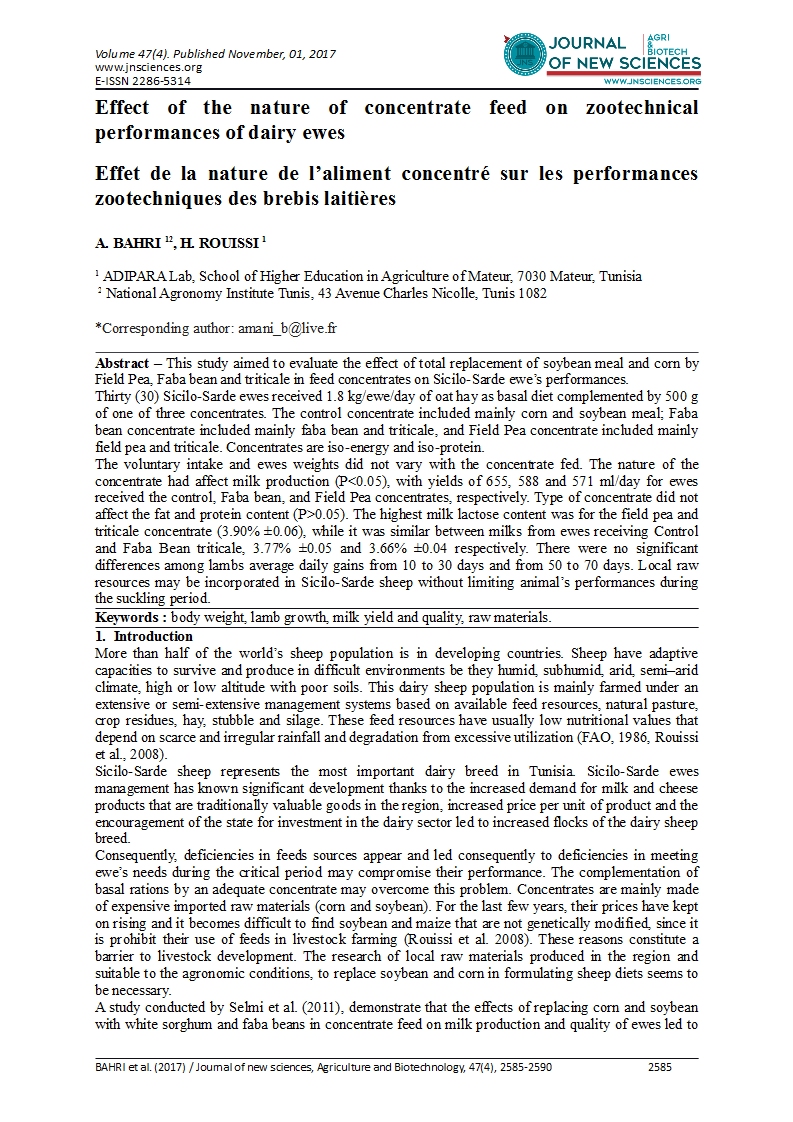 More than half of the world’s sheep population is in developing countries. Sheep have adaptive capacities to survive and produce in difficult environments be they humid, subhumid, arid, semi–arid climate, high or low altitude with poor soils. This dairy sheep population is mainly farmed under an extensive or semi-extensive management systems based on available feed resources, natural pasture, crop residues, hay, stubble and silage. These feed resources have usually low nutritional values that depend on scarce and irregular rainfall and degradation from excessive utilization (FAO, 1986, Rouissi et al., 2008).

Sicilo-Sarde sheep represents the most important dairy breed in Tunisia. Sicilo-Sarde ewes management has known significant development thanks to the increased demand for milk and cheese products that are traditionally valuable goods in the region, increased price per unit of product and the encouragement of the state for investment in the dairy sector led to increased flocks of the dairy sheep breed.

Consequently, deficiencies in feeds sources appear and led consequently to deficiencies in meeting ewe’s needs during the critical period may compromise their performance. The complementation of basal rations by an adequate concentrate may overcome this problem. Concentrates are mainly made of expensive imported raw materials (corn and soybean). For the last few years, their prices have kept on rising and it becomes difficult to find soybean and maize that are not genetically modified, since it is prohibit their use of feeds in livestock farming (Rouissi et al. 2008). These reasons constitute a barrier to livestock development. The research of local raw materials produced in the region and suitable to the agronomic conditions, to replace soybean and corn in formulating sheep diets seems to be necessary.

A study conducted by Selmi et al. (2011), demonstrate that the effects of replacing corn and soybean with white sorghum and faba beans in concentrate feed on milk production and quality of ewes led to similar level of milk production (0.4 l/day), fat content and pH, in both groups. But resulted in a significant change on the protein and lactose content (p>0.05).

The aim of this study was to evaluate the effect of Triticale, Faba bean and Field Pea local raw materials cultivated and produced in North Africa as a substitution for corn and soybean, on performances of Sicilo-Sarde ewes during the suckling period.

The study was carried out at the animal experimental farm (Lafareg) of the regional field crops research center in Beja Tunisia, during a period of 2 weeks of adaptation and 10 weeks of trial (treatments). The experiment was run during the suckling period and started in September 2014 approximately 15 days before parturition. Ewes were housed in separate compartment belonging to the experimental station.

Samples of experimental foods (concentrates and oat hay) were analyzed for dry matter (DM), organic matter (OM), mineral matter (MM), and crude fiber (CF) according to AOAC (1999). Crude protein (N × 6.25) was determined according to Kjeldahl method (Kjeldahl, 1883). The nutritive value of concentrate and oat hay was calculated according to Sauvant (1981).

The quantity of feeds was recorded on a daily basis. Before the morning feeding, distributed and left-over quantities were weighed and subtracted to measure the intake quantity of oat hay.

Milk yield was measured by emptying ewe’s udder before the morning feeding and after separating lambs from their mothers. After 2 hours ewes were hand-milked. The recorded volume of milk was multiplied by 12 to estimate daily milk yield. Milk samples were collected from ewes for physico-chemical composition of milk. Different parameters were determined: fat, protein, lactose, density, pH and freezing point by using Lactoscan (Milkotronic LTD, serial No. 4696, Hungary).

The chemical composition of experimental foods is shown in Table 1.

During the experimental period, all of the offered concentrate quantities were consumed. Statistical analysis showed that the voluntary intake of ewes was similar (P>0.05) among diet with averages about 1594, 1570 and 1563 g DM/ewe/day for (GC), (GP) and (GF) ewes groups (Figure 1), respectively.

This result corroborates with those found by Selmi et al. (2011) who showed that the local concentrate did not affects the intake levels of ewes. Similarly, a local concentrate didn’t have influence on feed intake of Sicilo-Sarde ewe which may be explained by the fact that oat hay intake depends not only on the energy density of the ration but also on the body condition of ewes in late pregnancy and during lambing (Rouissi et al., 2008). The average of daily intake increased, during the suckling period, for all groups of ewes with a little superiority for the control group (GC). This result concord with the finding of Hammami et al. (2014) who reported an average of oat hay intake about 1700 g DM/ewe/day for ewes receiving a local concentrate based on faba bean and barley and for those receiving a control concentrate.

Milk yield was affected by the nature of concentrate (P<0.05) (Table 2). It was higher for the GC group of ewes than that for the experimental groups (GF and GP) presumably because of different energy sources. Corn for GC group had a rate of degradability in the rumen of about 50% while rates for triticale in the GF and GP were around 85% (Michalet-Doreau and Sauvant, 1989; Gulmez et al., 2010). Likewise, the soybean meal for GC had a higher rate of protein about 51% MS. While rates for faba bean and field pea for GF and GP groups were 29%MS and 24%MS, that allowed them to produce mid-levels milk comparable to levels allowed by soybean meal (Carrouée et al., 2003). Additionally, the presence of anti-nutritional factors in concentrates of experimental groups (GF and GP) was marked by the reduction in the quantity of milk produced. In fact, triticale seeds contain trypsin inhibitors and faba beans contain condensed tannins that inhibit their digestibility compared to other cereals (Wang and Uberschar 1990; MaisonnierGrenier et al., 2005). Significant difference milk yield levels were reported by Rouissi et al. (2008) in Sicilo-Sarde ewes receiving a concentrate formulated by imported raw materials and ewes receiving a concentrate formulated by local raw materials. Similar milk average was found by Mâamouri and Rouissi (2008) regardless the nature of concentrate.

The level of fat was similar for all ewes group (P>0.05). These results agreed with those reported by Selmi et al. (2014), while, averages were slightly higher. This increase of the fat rate may be explained by the suckling period in which this work was conducted however the cited authors worked during the milking period. In fact, this period is characterized by the mobilization of ewe’s reserves to cover their need that increased the content of blood in fatty acids and the high concentration of milk in the beginning of lactation (Bocquier and Caja, 2001). Protein content of milk was also similar between all diets (P>0.05). These results disagree with those found by Selmi et al. (2011) who showed that the comparison between different protein sources (soybean vs faba bean) has an effect on milk protein content.

However, the lactose content was affected by the nature of raw materials (P<0.05), ewes fed with field pea and triticale concentrate had the highest value of lactose (3.90%) comparatively to other ewes receiving (GF) concentrate (3.66%) and those receiving (GC) concentrate (3.77%). This difference of average could be explained by to the richness of pea in starch which is degradable carbohydrate (Carrouée et al., 2003). Results were close to those of Selmi et al. (2011) who found that milk from ewes fed with local concentrate as a substitution to the imported one had higher lactose content.

The physic characteristics of milk provide information on the quality of milk. The pH and freezing point were similar between ewe’s groups (P>0.05). However, the milk density was significantly different between diets. Selmi et al. (2011) found that the substitution of imported concentrate by a local one affected the density of milk, showed similar trend.

The concentrate type affected the body weight of ewes (P<0.05). All ewes lost weight after lambing until the 5th week then their body weight increased to reach stability (Figure 2). Throughout the suckling period, body weight of ewes fluctuated between 34.62 and 30.90 kg for the GF 32.79 and 32.00 kg for GP and 34.96 and 32.55 kg for GC ewe’s group treatment, respectively (Figure 2). All body weights of ewes decreased following lambing which might be explained not only by the physiological status of ewes that are forced to mobilize their body reserves to satisfy needs of production but also by the decreasing intake capacity following lambing (Rouissi et al., 2008). Selmi et al. (2014) showed that there were no significant differences between weights of ewes receiving diets based on local raw materials (faba and barely ; faba and triticale).

The effect of the concentrates on growth performances of lambs was reported in table 3. Lamb body weight at birth, lamb’s ADG10-30 and ADG50-70 were comparable among all groups (P>0.05). This result is in agreement with a previous study where replacing soybean meal by faba bean did not influence the ADG of lambs (Hammami et al., 2014).

The substitution of imported raw materials (corn and soybean) by local raw materials (triticale, faba bean and field pea) in the formulation of concentrated feed for ewe can maintain satisfactory performances of the Sicilo-Sarde dairy sheep: the milk quality, the voluntary intake and the average of daily gain from 10 to 30 days and from 50 to 70 days. Even if the milk yield and ewes body weight tended to be negatively affected, farmers may compensate by greater income from reduced costs of feed inputs.

Selmi H, Bahri A, Rouissi A, Baraket M, Jemmali B, Amraoui M, Rouissi H (2014) Effect of the nature of the energy source (barley or triticale) on the production, milk quality and fatty acid profil of Sicilo-Sarde dairy ewe’s in the milking period. JNS 2 (3): 21-26