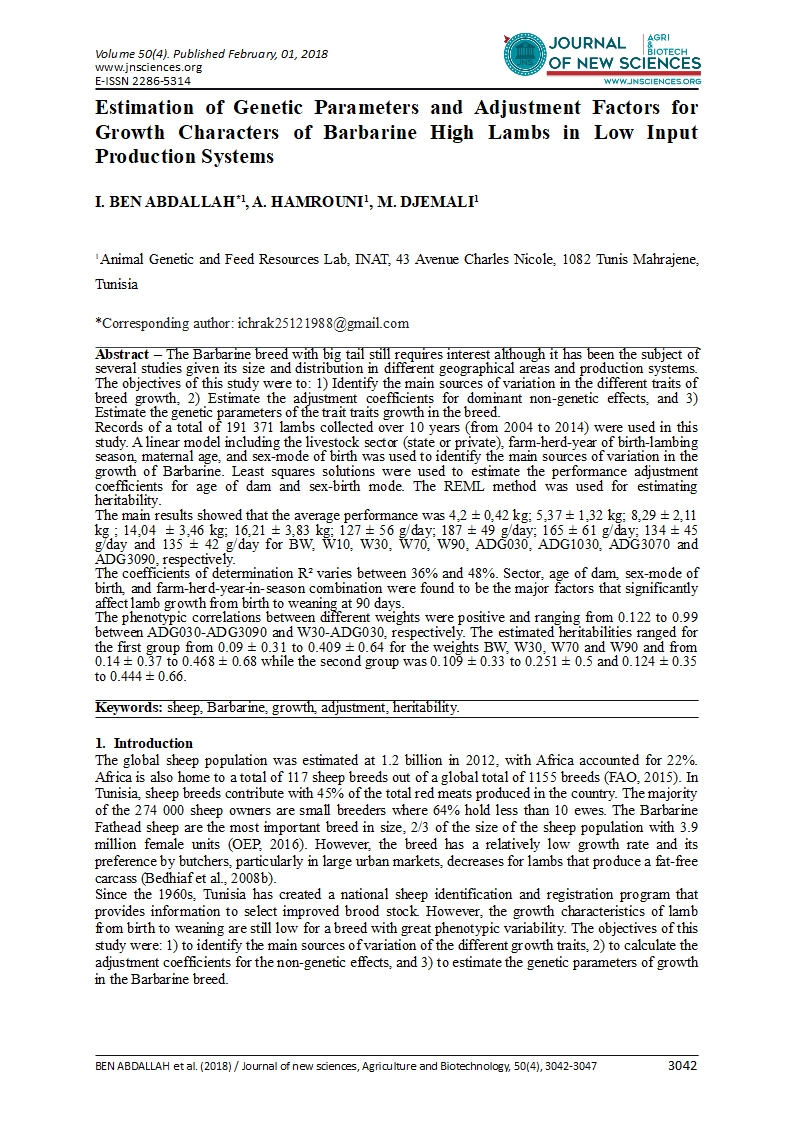 The global sheep population was estimated at 1.2 billion in 2012, with Africa accounted for 22%. Africa is also home to a total of 117 sheep breeds out of a global total of 1155 breeds (FAO, 2015). In Tunisia, sheep breeds contribute with 45% of the total red meats produced in the country. The majority of the 274 000 sheep owners are small breeders where 64% hold less than 10 ewes. The Barbarine Fathead sheep are the most important breed in size, 2/3 of the size of the sheep population with 3.9 million female units (OEP, 2016). However, the breed has a relatively low growth rate and its preference by butchers, particularly in large urban markets, decreases for lambs that produce a fat-free carcass (Bedhiaf et al., 2008b).

Since the 1960s, Tunisia has created a national sheep identification and registration program that provides information to select improved brood stock. However, the growth characteristics of lamb from birth to weaning are still low for a breed with great phenotypic variability. The objectives of this study were: 1) to identify the main sources of variation of the different growth traits, 2) to calculate the adjustment coefficients for the non-genetic effects, and 3) to estimate the genetic parameters of growth in the Barbarine breed.

Growth records of a total of 191 371 lambs born during the 2004-2014 period in 79 herds were used in this study. These data are provided by the Livestock and Pasture Office mandated by the Ministry of Agriculture to manage the programs of performance control in domestic animal. A linear model (1) was used to identify the sources of variation affecting the growth characteristics of the lamb in the environmental conditions encountered.

All the factors of the model (1) were fixed, except the residual error being considered random.

The least square averages of maternal age and sex-mode of birth were used to estimate the respective adjustment coefficients for the different growth traits. The following formula has been used (Schaeffer, 1983):

Genetic parameters were made according to a father (3) model using the Maximum Likelihood Restricted (REML) method. The lack of complete information on the pedigree of the lambs and the difficulty of having connections between herds was the reason for considering the estimation of the genetic parameters only in herds of the OEP. Only herds of the OEP where the connection was made in two groups of herds.

The estimation of the components of the variation

The lamb frequencies by sex-birth mode are presented in Table (1). Only sixteen percent of the lambs born were multiple.

The analysis of the sources of variation of the growth traits showed that all the factors of the model (1) were highly significant (p <0.01) for the different growth traits studied (Table 3). The coefficients of determination R² vary between 36% and 48%. These results prove that the growth of the lamb is not only a reflection of its genetic potential but there are non-genetic factors such as sex-birth-mode and age of dam and driving factors such as the farm-herd -season that create differences between lambs.

The estimation of the adjustment coefficients for the sex-mode of birth and the age of the mother are presented in Table (4). Male and single lambs were used as a basis of comparison to quantify the effect of sex-birth mode on growth traits. The age of the 5-year-old mother was used as a baseline to quantify the effect of the mother's age on the growth of her lambs. The estimated coefficients of adjustment are shown in Table (5).

The average growth performances and their variation are illustrated in Table (5). These coefficients are of the multiplicative type and make it possible to eliminate the differences due to the sex-mode of the lambs and the age of dam. Lambs can be compared in a more objective way.

The estimation of genetic parameters of growth traits by the REML method was carried out in two groups of herds. The first closes 670 lambs with 70 fathers and the second closes 634 lambs with 46 fathers. The variance components and estimated heritabilities are shown in Table (6).

Non-genetic factors such as sex-lambing mode and age of dam are real sources of variation even in low-input production systems. Adjustment for these variation factors is essential to optimize the selection of future breeding rams. The average weight and weight gains of Barbarine lambs are down from the sixties and seventies. There is an urgent need to re-examine the national registration program and the methods of selecting rams and replacements. All the phenotypic correlations between weights and weight gains at different ages are more or less high, with significant heritability for weight at 90 d of age and ADG 30-90, indicating that selection is possible for growth in low-input environments.

The authors thank the Office of Livestock and Pasture for providing the data of this research.