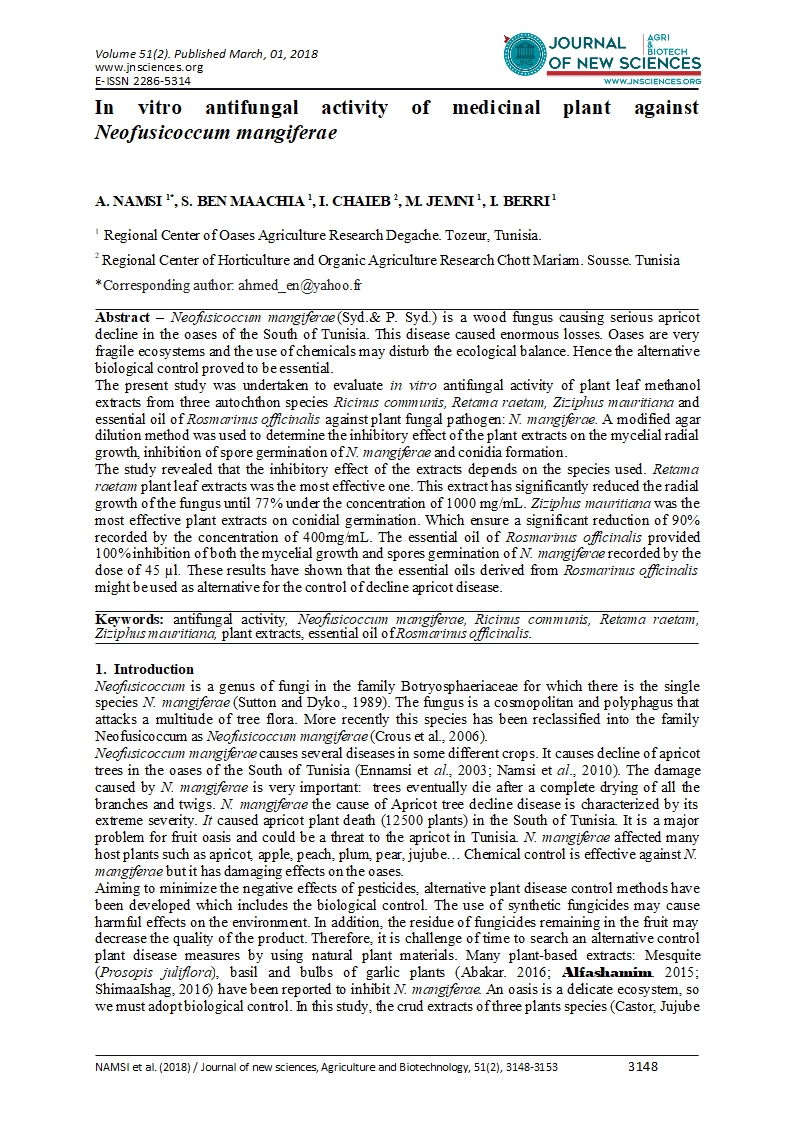 Abstract – Neofusicoccum mangiferae (Syd.& P. Syd.) is a wood fungus causing serious apricot decline in the oases of the South of Tunisia. This disease caused enormous losses. Oases are very fragile ecosystems and the use of chemicals may disturb the ecological balance. Hence the alternative biological control proved to be essential. The present study was undertaken to evaluate in vitro antifungal activity of plant leaf methanol extracts from three autochthon species Ricinus communis, Retama raetam, Ziziphus mauritiana and essential oil of Rosmarinus officinalis against plant fungal pathogen: N. mangiferae. A modified agar dilution method was used to determine the inhibitory effect of the plant extracts on the mycelial radial growth, inhibition of spore germination of N. mangiferae and conidia formation. The study revealed that the inhibitory effect of the extracts depends on the species used. Retama raetam plant leaf extracts was the most effective one. This extract has significantly reduced the radial growth of the fungus until 77% under the concentration of 1000 mg/mL. Ziziphus mauritiana was the most effective plant extracts on conidial germination. Which ensure a significant reduction of 90% recorded by the concentration of 400mg/mL. The essential oil of Rosmarinus officinalis provided 100% inhibition of both the mycelial growth and spores germination of N. mangiferae recorded by the dose of 45 µl. These results have shown that the essential oils derived from Rosmarinus officinalis might be used as alternative for the control of decline apricot disease.

Neofusicoccum is a genus of fungi in the family Botryosphaeriaceae for which there is the single species N. mangiferae (Sutton and Dyko., 1989). The fungus is a cosmopolitan and polyphagus that attacks a multitude of tree flora. More recently this species has been reclassified into the family Neofusicoccum as Neofusicoccum mangiferae (Crous et al., 2006).

Neofusicoccum mangiferae causes several diseases in some different crops. It causes decline of apricot trees in the oases of the South of Tunisia (Ennamsi et al., 2003; Namsi et al., 2010). The damage caused by N. mangiferae is very important: trees eventually die after a complete drying of all the branches and twigs. N. mangiferae the cause of Apricot tree decline disease is characterized by its extreme severity. It caused apricot plant death (12500 plants) in the South of Tunisia. It is a major problem for fruit oasis and could be a threat to the apricot in Tunisia. N. mangiferae affected many host plants such as apricot, apple, peach, plum, pear, jujube… Chemical control is effective against N. mangiferae but it has damaging effects on the oases.

Aiming to minimize the negative effects of pesticides, alternative plant disease control methods have been developed which includes the biological control. The use of synthetic fungicides may cause harmful effects on the environment. In addition, the residue of fungicides remaining in the fruit may decrease the quality of the product. Therefore, it is challenge of time to search an alternative control plant disease measures by using natural plant materials. Many plant-based extracts: Mesquite (Prosopis juliflora), basil and bulbs of garlic plants (Abakar. 2016; Alfashamim. 2015; ShimaaIshag, 2016) have been reported to inhibit N. mangiferae. An oasis is a delicate ecosystem, so we must adopt biological control. In this study, the crud extracts of three plants species (Castor, Jujube and Retam) and the essential oil derived from Rosemary plant were evaluated for efficacy against N. mangiferae in vitro.

Crude plant extract: Castor: Ricinus communis; Jujube: Ziziphus mauritiana and Retam: Retamaraetam. The leaves of these plants were harvested, dried (37°C), crushed and ground into a fine powder.20 g of each powder was extracted in 160 ml of methanol. The methanolic extract obtained was evaporated under reduced pressure on a rotary evaporator to obtain crude extract.

Plant Essential Oil: Rosemary: Rosmarinus officinalis: The essential oils were extracted from fresh leaves of rosemary plants by hydrodistillation using a clevenger apparatus. The obtained essential oils were stored in a refrigerator at 4°C before being used in the bioassays (Khalil et al., 2015)

Hyphal growth inhibition test was used to determine the antifungal activity. A series of concentrations of plant methanol crude extracts (0; 0,01; 0,05; 0,075; 0,1; 0,2; 0,5; 1; 2; 3; 4; 5; 20; 50; 400 et 1000 mg. ml-1) was incorporated into media: Potato Dextrose Agar (PDA) dishes. This method provides better distribution of extract in the agar which enabled surface contact of fungal and plant extract. Agar without plant crude extracts, but containing identical concentration of methanol, served as negative controls. After the solidification of the medium, plugs of 0.7 cm diameter of fungal mycelia cut from edge of seven days old culture of N. mangiferae were inoculated in the center of each Petri plate and incubated at 32˚C. Radial diameter of N. mangiferae was measured after 24h, 48h, and 72h of incubation. Each extract concentration was assayed in triplicate and the mean values were calculated. To avoid bacterial contamination 0.5 g of antibacterial streptomycin was added to 1 L of PDA medium. The colony diameter was then measured and Mycelia growth inhibition (%) was calculated by using the following formula:

Where, DC and DT represent the diameter (mm) of control and treated colony, respectively.

The extract concentration required for 50% inhibition (CI50) was determined at 95% of confidence intervals, using a Probit analysis with NCSS 97 statistical.

Rosmarinus essential oil was screened for its antifungal activity against N. mangiferae by disc diffusion method. Different concentrations were used for assay. The sterile discs (5mm diameter, Whatman’s filter paper N°42) were soaked in added concentrations (0µl/disc; 5µl/disc; 15µl/disc; 45µl/disc and 55 µl/disc) of essential oil. 5mm plugs of N. mangiferae were inoculated on the PDA plates, and the dishes were then incubated at 32°C for 7 days. The radial mycelia inhibition percentage was calculated when fungal mycelium reached the edges of the control Petri dishes (Untreated disc paper). Three replications of each treatment were carried out and averages calculated. The percentage inhibition of radial mycelial growth was calculated using the last formula.

2.3.3. Efficiency of Crude plant extract on the fungus sporulation

Mean values were subjected to Analysis of Variance (one-way ANOVA), and the Newman and Keuls test was used to determine significant differences (p<0.05) between treatments. All experiments were conducted according to a completely randomized design.

It was observed that all tested concentrations of the three plants species leaf methanol extract moderately reduced the mycelia growth of the N. mangiferae. All methanol leaf extract concentration between 2 and 20 mg L-1 failed to completely stop the growth of the pathogen. The lowest inhibition percentage (<20%) are recorded at the lower doses of 0.1 mg/L for the three plant extracts. The concentration of 20 mg/ml of the three tested plants showed maximum percentage inhibition (over than 50%) of mycelium growth of N. mangiferae. In addition, R. raetam seems to be the most effective plant extract against N. mangiferae, with a mycelial growth inhibition of about 77% at a dose of 10g/L (Table 1).

The present study indicated that the methanol extract of Ricinus communis, Retama raetam and Ziziphus mauritiana displayed inhibitory activities against growth mycelium of N. mangiferae. The methanol leaf extract of the three different tested plants have been studied against many fungal species (Naz and Bano, 2012; Edziri et al., 2010; Al Ghasham et al., 2017) and have showed a broad antifungal activity.

Few reports are available on the antifungal plant extract against N. mangiferae. The results indicated that the three plant extracts are good antifungal agents but R. raetam is more effective. It is therefore, encouraging to identify and characterize the active principle of this plant.

The effect of essential oil doses of 5 and 15μl do not have any inhibitory effect on mycelia growth of the fungus. They revealed statistically the same effect as the control. According to the result obtained from 45µl and 55µl concentrations of essential oil applied showed significant antifungal activity against N. mangiferae radial mycelium growth. Our result demonstrates that 55µl essential oil concentration was able to effectively inhibit N. mangiferae growth (more than 87%) (Table 3). The effectiveness of R. officinalis essential oil has been tested on many fungi such as Aspergillus falvus, A. parasiticus and A. ochraceus (Musa Ozcan and Chalchat, 2008). According to these authors the effectiveness of rosemary on growth of tested fungi is mainly due to the major substances such as thymol, carvacrol and menthol showing antifungal effect (Musa Ozcan and Chalchat, 2008). Angioni et al. (2004) suggested the existence of different genotypes of rosemary. They reported the weak effectiveness of essential oil of the Sardinian rosemary against Botrytis cinerea and Rhizoctonia solani. They also confirmed the effectiveness of this species on Fusarium graminearium (Angioni et al., 2004).

3.2.3. Efficiency of Crude plant extract on the fungus sporulation

Sporulation of N. mangiferae was significantly (p <0.001) reduced when treated with the different plant methanol extract at all the concentrations tested compared to the control. All the concentrations applied have the same response on sporulation of N. mangiferae. However, Z. Vulgaris seems to be the most effect on the fungus sporulation among the three tested plants (Table 4).The different methanol extract at the low concentration (20mg) were able to reduce more than 80% of the spore number of the pathogen. This might be a promising result. In fact, the infection by the pathogen is usually provided by spores (Namsi, 2010). The decreases of the spore’s number assure the reduction of the disease infection and can protect apricot trees in the oases.

The antifungal effects of medicinal plant extracts: Castor: Ricinus communis; Jujube: Ziziphusmauritiana and Retam: Retamaraetam were determined. The result showed that all extracts have significant inhibitory effect on fungus growth mycelium compared to the Control. Generally, the results showed that the antifungal activity increase with the increase of the extract concentration. The results achieved encouraging carrying out phytochemical analysis to determine the bioactive compounds in each medicinal plant and use as biological alternative to control Apricot Tree Decline Disease in future.

Namsi, A., Zouba A., Triki M. A., Ben Mahmoud M.O., Takrouni, ML. (2010). Study on Nattrassia mangiferae, the Causal Agent of Apricot Tree Decline Disease in the Oases of South Tunisia: Biology and in Vitro Evaluation of Some Fungicides. The African Journal of Plant Science and Biotechnology 4 (Special Issue 2): 89-90.