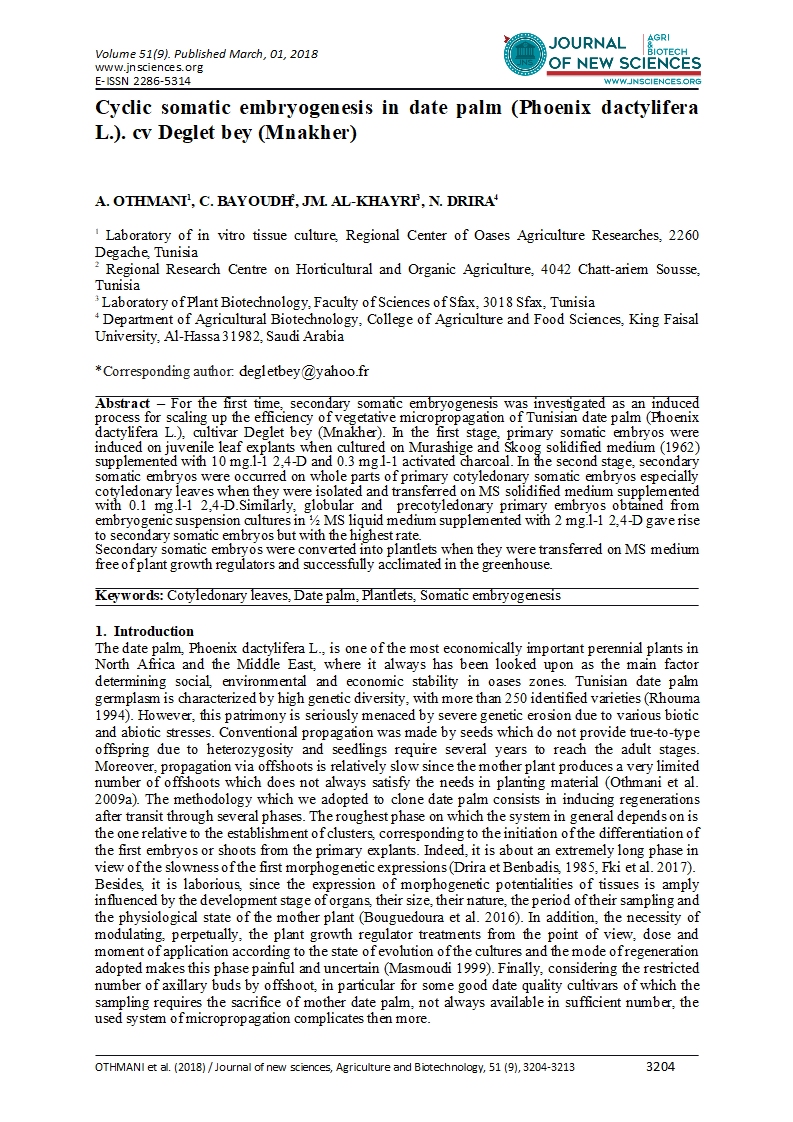 The date palm, Phoenix dactylifera L., is one of the most economically important perennial plants in North Africa and the Middle East, where it always has been looked upon as the main factor determining social, environmental and economic stability in oases zones. Tunisian date palm germplasm is characterized by high genetic diversity, with more than 250 identified varieties (Rhouma 1994). However, this patrimony is seriously menaced by severe genetic erosion due to various biotic and abiotic stresses. Conventional propagation was made by seeds which do not provide true-to-type offspring due to heterozygosity and seedlings require several years to reach the adult stages. Moreover, propagation via offshoots is relatively slow since the mother plant produces a very limited number of offshoots which does not always satisfy the needs in planting material (Othmani et al. 2009a). The methodology which we adopted to clone date palm consists in inducing regenerations after transit through several phases. The roughest phase on which the system in general depends on is the one relative to the establishment of clusters, corresponding to the initiation of the differentiation of the first embryos or shoots from the primary explants. Indeed, it is about an extremely long phase in view of the slowness of the first morphogenetic expressions (Drira et Benbadis, 1985, Fki et al. 2017).

Besides, it is laborious, since the expression of morphogenetic potentialities of tissues is amply influenced by the development stage of organs, their size, their nature, the period of their sampling and the physiological state of the mother plant (Bouguedoura et al. 2016). In addition, the necessity of modulating, perpetually, the plant growth regulator treatments from the point of view, dose and moment of application according to the state of evolution of the cultures and the mode of regeneration adopted makes this phase painful and uncertain (Masmoudi 1999). Finally, considering the restricted number of axillary buds by offshoot, in particular for some good date quality cultivars of which the sampling requires the sacrifice of mother date palm, not always available in sufficient number, the used system of micropropagation complicates then more.

Juvenile leaves were cut into 1-1,5 cm long explants using a sharp sterilized blade. The explants were inoculated on MS basal medium incorporating 10 mg.l-1 2,4-D, 30 g.l-1 sucrose and 0.3 g.l-1 activated charcoal (M1) and were solidified with 0.7% agar. The pH of all media was adjusted to 5.7 prior to autoclaving at 120°C and 1.4 Kg cm-2 for 20 min. Cultures were kept in darkness at 28 ± 2°C and subcultured every 4 weeks for 6-7 months under the same culture conditions. After this induction period, the embryogenic callus were separated from the original explants and transferred onto MS solidified medium supplemented with 0.1 mg.l-1 2,4-D in order to stimulate the development of embryogenic embryos. Cultures, subcultured monthly, were placed in a 28 ± 2°C culture room with a 16/18 h photoperiod with 80 µmol m-2 s-1 fluorescent light.

With the aim of initiating embryogenic suspension culture, 0.5 g of friable callus was minced, filtered through a 500 µm mesh filter and transferred to 250 ml Erlenmeyer flasks containing 50 ml half- strength MS liquid medium supplemented with 0,4 mg l-1 activated charcoal and incorporating 2mg l-1 2,4-D (Othmani et al. 2009b). Subculturing was done every 5 days by decanting off the old medium and replacing it with fresh medium of the same composition. Every 3 days, several samples from suspension cultures were isolated and observed under an inverted microscope for the development of both primary and secondary somatic embryos.

2.5. Conversion of somatic embryos into plantlets

After 8 months of culture on MS medium containing 10 mg.l-1 2,4-D(M1), juvenile leaf explants gave rise to primary somatic embryos whether after transit by undifferentiated cell culture phase; indirect somatic embryogenesis (Fig 1a, b and c) or in a direct way (Fig 2a, b and c).

Besides, we noted that secondary somatic embryos and shoots in formation appeared essentially from cotyledonary leaf tissues of primary somatic embryos. The latters, showed at the same time multiple and diverse morphogenetic capacities on different levels of their surface.

Interestingly, the tip of every cotyledonary leaf of primary somatic embryos of the studied cultivar develops permanently specific nodules with different forms and sizes (Fig 3).

The fat of these structures is strictly depended on the 2,4-D concentration. Indeed, on a medium devoid of plant growth regulators (M3), nodules size decreases gradually until their total degeneration (Fig 4a).

As regards for the median part of these leaves, it can develop, sometimes (15%) certain nodular calli (Fig 5 a) when primary somatic embryos were cultured on M2 medium. But, it is especially endowed with a high potentiality (90%) to give rise direct secondary somatic embryos (Fig5b), particularly during the first generation of multiplication on M2 medium. Occasionally, this part of these leaves can develop adventitious shoots (Fig5c).

But, their basal part was the best region for the stimulation of all types of structures previously described (Fig 6 a,b).

For this reason, cotyledonary leaves of somatic embryos can be used as an abundant source of explants to overcome the rarity and the recalcitrance of the cultivar Deglet bey.

It is advisable to underline that these secondary emissions often appear during the first generations, finish by disappear after 2-3successive multiplication cycles. However, we found that the excision of cotyledonary leaves of primary somatic embryos followed by their transfer into the dark for one month on MS medium supplemented with 0.5 mg.l-1 (M4) stimulated especially secondary somatic embryogenesis. Consequently, such technique permits to promote the rejuvenation of culture during many years.

In Parallel to secondary somatic embryogenesis, a secondary shoot organogenesis was also recorded (Fig8a), especially when primary shoots where transferred on M3 medium. The subculture of secondary shoots on MS medium supplemented with ANA and BA (1-1 mg.l-1), insure both multiplication (Fig8b) and development of shoots susceptible of conversion into plantlets after approximately 2 subcultures into M2medium (Fig8c).

The remarkable capacity of proliferation already mentioned in the primary somatic embryos of the cultivar Deglet bey can be retained in certain plantlets that derived from their conversion. Indeed, some of these plantlets are capable to give rise to shoot clusters (Fig 9a) that emerge directly from their shoot apex or embryogenic callus near to the tip of their leaves (Fig 9b and c).

The follow-up of the morphological transformations undergone by the embryogenic suspension cultures, allows detecting some aggregates (%) of little nodules corresponding to an undifferentiated secondary somatic embryos that initiated on the surface of the pro-embryos (Fig 10). These secondary somatic embryos get loose easily under the influence of the excitement and they can follow two ways; some of them (30%) develop in structured somatic embryos, others contribute to the establishment of new cycles of multiplication. Such phenomenon is responsible for a significant improvement of the biomass of the culture.

By opposition to the explants taken from offshoots, those derived from in vitro tissue culture, in particular from somatic embryos react rather quickly and seem hypersensitive to the effect of plant growth regulators. Indeed, the low 2,4-D concentrations, which seem generally unfavorable to the induction of the callogenesis in the case of explants derived from offshoots, proved to be, on the other hand, effective in the case of explants taken from in vitro culture. For example, once mature somatic embryos of the cultivar Deglet bey was cultured on MS medium containing 0,1 mg.l-1 2,4-D ( M2), they gave rise to diverse types of morphogenetic responses, including secondary somatic embryos.

The secondary somatic embryogenesis is frequent in many species during the phases of maturation and conversion of primary somatic embryos into plantlets, particularly when it is about culture on agar solidified medium (Ziv et Gadasi 1986; Abousalim et Hafdi 1995). According to Wan and Vasil (1982), three to four generations of somatic embryos can be obtained from the primary embryos.

Our experiences proved that diverse modes of regeneration, characterized each one by the nature and the origin of the morphogenetic responses, are highly influenced by the 2,4-D concentration of the employed culture medium during the multiplication phase. According to Masmoudi (1999), the nature and the origin of these responses were also influenced by the composition of the culture media used during the phase of initiation of morphogenetic responses.

As reported by Zouine et El Hadrami (2007), the stimulating effect of the 2,4-D on the secondary somatic embryogenesis could be partially explained by the induction of cellular division at both the apex of the primary somatic embryos and the apical plantlets shoot.

In this context, Nhut et al. (2006) report that the addition of thidiazuron (TDZ) to the culture medium stimulated secondary somatic embryogenesis in Lilium longiflorum.

Certainly, if the regenerated somatic embryos are genetically stable, their cotyledonary leaves can serve as source of sampling explants, in the same way as the offshoots, to overcome the rarity and the recalcitrance of some cultivars of date palm. This was moreover already reported by Masmoudi (1999) in date palm, cultivar Deglet nour, Tivarekar and Eapen (2001) in Vignamungo, Ning and al. (2007) in prunus mume and Seo et al. (2007) in Sesamum indicum L .Besides, Trigiano (1997) mentioned that the secondary somatic embryogenesis inhibited the normal process of primary somatic embryos germination.

The excision of primary somatic embryo cotyledonary leaves, when it doesn’t cause an excessive emission of polyphenolic compounds, improved clearly the reactivity of their tissues. This disturbance of the morphogenetic correlations is a strongly inductive factor of a great importance on plant cell differentiation. Also, it favors the putting in direct contact of the competent cells to the somatic embryogenesis with the culture medium.

In parallel, we noticed a callogenesis on the tip of some roots of certain somatic embryos of the cultivar Deglet bey. This unexpected phenomenon was not previously detected in the date palm, but it was observed in other species, such as Arabidopsis thaliana (Sugiyama et Imamura 2006) and Saint John wort (Hypericum perforatumL.) (Zobayed et Saxena 2003).Concerning the organogenic cultures, it multiplied essentially by a secondary formation of new shoots; phenomenon previously described by Drira (1985) and Masmoudi (1999).

As for embryogenic suspension cultures, the fact of having an active secondary somatic embryogenesis, constitutes a decisive advantage in the field of micropropagation of date palm in the industrial scale. Indeed, the number of somatic embryos obtained in agitated liquid medium is upper by far to the one obtained on agar solidified medium from the same mass of embryogenic callus. This benefit effect of liquid culture on the induction of secondary somatic embryogenesis was already reported on date palm by Masmoudi (1999), Zouine et El Hadrami (2007) and Abohatem et al (2017).

In conclusion, we demonstrated that secondary somatic embryogenesis is feasible in date palm and it could be used for large scale micropropagation of potential genetic transformed somatic embryos in a shorter time.