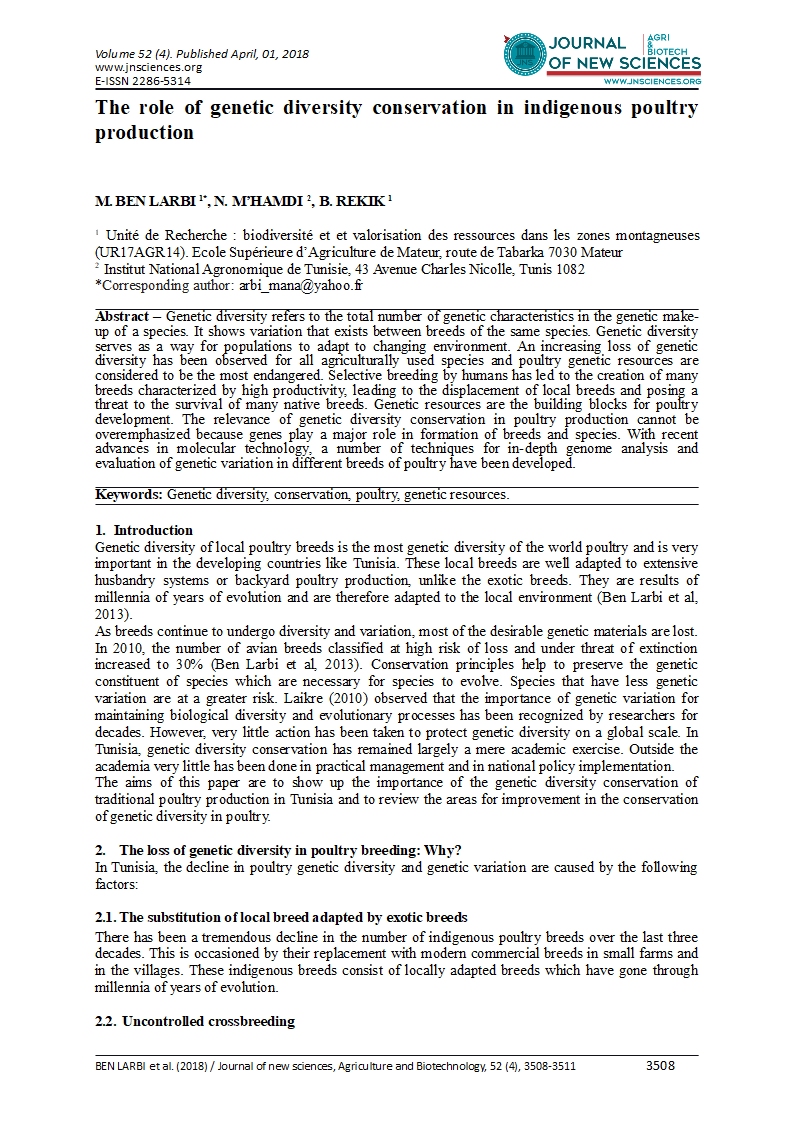 Abstract – Genetic diversity refers to the total number of genetic characteristics in the genetic make-up of a species. It shows variation that exists between breeds of the same species. Genetic diversity serves as a way for populations to adapt to changing environment. An increasing loss of genetic diversity has been observed for all agriculturally used species and poultry genetic resources are considered to be the most endangered. Selective breeding by humans has led to the creation of many breeds characterized by high productivity, leading to the displacement of local breeds and posing a threat to the survival of many native breeds. Genetic resources are the building blocks for poultry development. The relevance of genetic diversity conservation in poultry production cannot be overemphasized because genes play a major role in formation of breeds and species. With recent advances in molecular technology, a number of techniques for in-depth genome analysis and evaluation of genetic variation in different breeds of poultry have been developed.

Genetic diversity of local poultry breeds is the most genetic diversity of the world poultry and is very important in the developing countries like Tunisia. These local breeds are well adapted to extensive husbandry systems or backyard poultry production, unlike the exotic breeds. They are results of millennia of years of evolution and are therefore adapted to the local environment (Ben Larbi et al, 2013).

As breeds continue to undergo diversity and variation, most of the desirable genetic materials are lost. In 2010, the number of avian breeds classified at high risk of loss and under threat of extinction increased to 30% (Ben Larbi et al, 2013). Conservation principles help to preserve the genetic constituent of species which are necessary for species to evolve. Species that have less genetic variation are at a greater risk. Laikre (2010) observed that the importance of genetic variation for maintaining biological diversity and evolutionary processes has been recognized by researchers for decades. However, very little action has been taken to protect genetic diversity on a global scale. In Tunisia, genetic diversity conservation has remained largely a mere academic exercise. Outside the academia very little has been done in practical management and in national policy implementation.

2. The loss of genetic diversity in poultry breeding: Why?

In Tunisia, the decline in poultry genetic diversity and genetic variation are caused by the following factors:

2.1. The substitution of local breed adapted by exotic breeds

There has been a tremendous decline in the number of indigenous poultry breeds over the last three decades. This is occasioned by their replacement with modern commercial breeds in small farms and in the villages. These indigenous breeds consist of locally adapted breeds which have gone through millennia of years of evolution.

In developing countries village chickens represent a diverse gene pool that comprises unique genetic features. Due to their development in a given environment they are better adapted to survive under harsh environmental and management conditions. Crossbreeding has been utilized extensively in the developing countries to improve the productivity of the indigenous livestock. But uncontrolled crossbreeding is one of the major causes of loss of genetic diversity especially among the rural poultry species and breeds. This menace may lead to a replacement of local genotypes with those of commercial hybrids, which have a higher production potential based on high nutrient requirements but are not selected for survival in such an environment (Weigend et al., 2013).

Owing to the consumer’s preference and demand for certain specifications in poultry products, there has been an intense genetic selection over many decades in favor of the preferred breeds and lines. This leads to loss of genetic variation in industrial stocks. Stocks with less genetic variability find it difficult to cope with most environmental challenges like disease outbreaks and climatic change. Success in commercial animal breeding is dependent on the genetic composition of the populations and reduced variability results in a limited flexibility to reach new breeding goals (Ben Larbi et al., 2013).

2.4. The importance of conservation of poultry genetic diversity

The relevance of genetic diversity conservation in poultry production cannot be overemphasized because genes play a major role in formation of breeds and species. Genetic resources are the building blocks for poultry development. It enables farmers and breeders to respond to changing environmental conditions and to meet consumers demand. Conservation of genetic diversity helps to reduce the dependency on external inputs as the improvement of indigenous breeds is encouraged.

Conservation helps to preserve desirable traits and produce birds with high quality grades. It also encourages natural selection of only the fittest individuals which are better able to cope with diverse environmental challenges. Wikipedia (2013) noted that if a population of a species has a very diverse gene pool, then there will be more variability in the traits of the individuals in that population and consequently more traits for natural selection to act upon to select the fittest individuals to survive.

Genetic diversity and biodiversity are dependent upon each other. Diversity within a species is necessary to maintain diversity among species, and vice versa (NSF, 2006). The authors argued that if one type is removed from the system, the cycle can break down, and the community becomes dominated by a single species. The National Biological Information Infrastructure (2008) asserted that the interdependency between genetic and biological diversity lead to changes in the environment, leading to adaptation of the remaining species ; and changes in genetic diversity leads to a loss of biological diversity (Pullin, 2002). As breeds continue to undergo diversity and variation, most of the desirable genetic materials are lost. Conservation principles help to preserve the genetic constituent of species which are necessary for species to evolve. Species that have less genetic variation are at a greater risk.

The maintenance of genetic diversity of poultry resources at adequate levels requires systematic scientific application of conservation biology principles. This entails the integration of population genetics and molecular biology.

Breeds in many cases have been described based on a few phenotypic traits, not minding that large parts of the genomic make-up of these breeds might be in common. To set up efficient conservation measures, therefore, reliable information about genetic difference between individuals, populations and breeds are required. In the differentiation of poultry breeds emphasis have been shifted from morphological and feather coloring characteristics to differentiation based on measurements at the molecular level (Pym, 2013).

This gives an initial insight into breed diversity by examining the differences in phenotypic traits. Phenotypic markers may be subdivided into discrete traits (such as morphological characters and phenes) and continuous traits (like body measurements) that are applicable to assessing genetic variation and phylogenetic relationships between various breeds and populations. Several authors have used this approach to differentiate breeds of animals (Jabbari et al, 2017).

According to Weigend and Romanov (2001) the assessment of DNA marker polymorphism suggests that variability in DNA is a powerful tool for examining diversity within and among individuals, families and populations.

Studies have shown that microsatellite typing can be applied to pooled DNA samples for population studies (Semik and Krawczyk, 2011 ; Hillel et al. 2003). The biodiversity of 52 chicken populations was evaluated (Hillel et al.2003) based on analysis of 22 microsatellite sequences. Results obtained were in agreement with earlier hypothesis that the red jungle fowl is the major progenitor of the domestic chicken. Using allele ladders for each microsatellite, scoring can be standardized between gels and even between laboratories (Weigend et al., 2013). The authors further argued that single nucleotide polymorphism (SNP) has been identified as a very promising class of molecular markers not only for biodiversity studies. Modern biotechnological technologies and the dramatic expansion of the sequence information within species will afford completely new possibilities for the use of genome variability in the next years to study diversity within and between breeds. SNPs will allow assessing variation within coding regions of genes, and may therefore provide higher sensitivity than microsatellites for identifying populations of greater conservation value, the authors noted. The authors however cautioned that the suitability of SNPs as molecular markers in biodiversity studies needs to be properly evaluated, since DNA polymorphism at the population level is affected by various constraints such as the position in the genome (neutral vs non-neutral), drift, selection and recombination.

AFLPs are reproducible biallelic markers that are distributed through the genome as restriction sites, and they allow estimates of genetic differentiation between breeds and related species (Ajmone-Marsan et al., 2002). AFLPs evaluate the presence or absence of amplification of specific fragments which correspond to insertion, deletion between restriction sites , or single nucleotide polymorphism at a site recognized by restriction enzymes (Semik and Krawczyk, 2011).Using AFLP markers, De Marchi et al.(2006) determined the genetic diversity of local chicken breeds of north- eastern Italy.

It is important to collate research information on genetic diversity of and genetic distance between different populations and breeds of local poultry stock especially, as this is essential to the conservation of these resources. It is advocated that a database containing detailed information on the genetic diversity of poultry breeds be developed as this will serve as a useful tool in the conservation of these breeds.

Weigend S. and Romanov M. N. (2002).The world watch list for domestic animal diversity in the context of conservation and utilization of poultry biodiversity. Poultry Sci., 58(4):411-430.