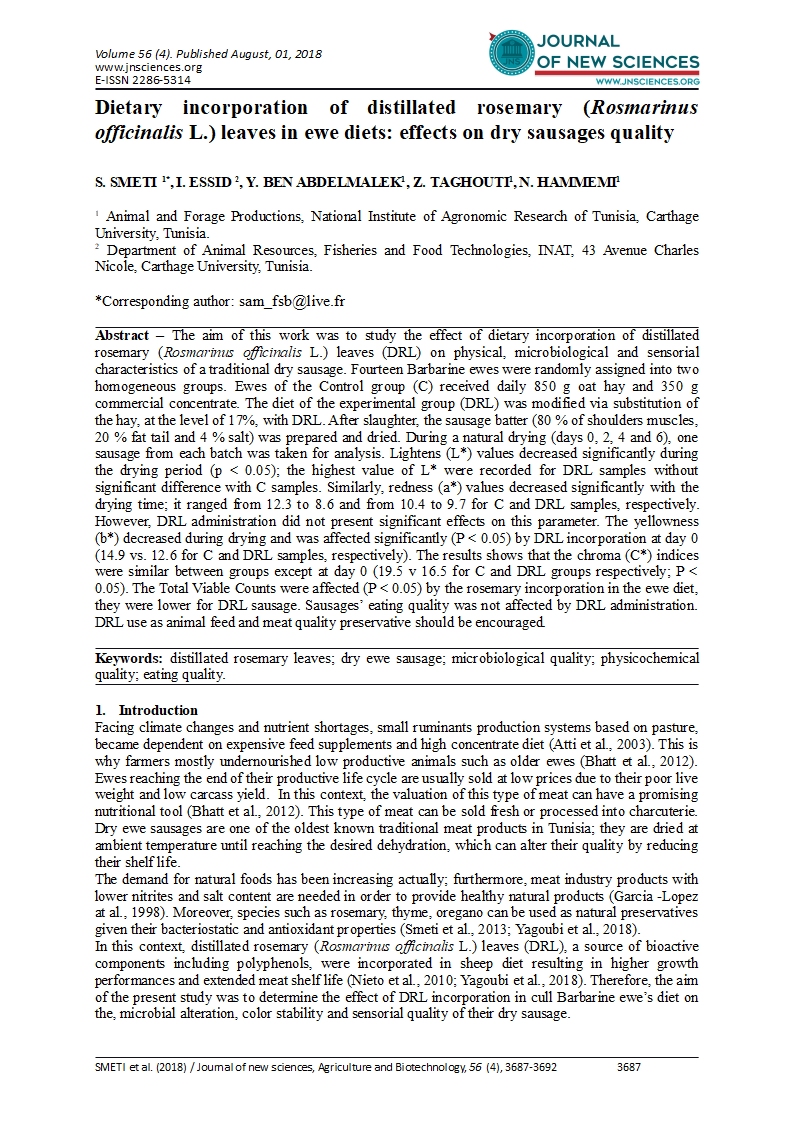 Abstract – The aim of this work was to study the effect of dietary incorporation of distillated rosemary (Rosmarinus officinalis L.) leaves (DRL) on physical, microbiological and sensorial characteristics of a traditional dry sausage. Fourteen Barbarine ewes were randomly assigned into two homogeneous groups. Ewes of the Control group (C) received daily 850 g oat hay and 350 g commercial concentrate. The diet of the experimental group (DRL) was modified via substitution of the hay, at the level of 17%, with DRL. After slaughter, the sausage batter (80 % of shoulders muscles, 20 % fat tail and 4 % salt) was prepared and dried. During a natural drying (days 0, 2, 4 and 6), one sausage from each batch was taken for analysis. Lightens (L*) values decreased significantly during the drying period (p < 0.05); the highest value of L* were recorded for DRL samples without significant difference with C samples. Similarly, redness (a*) values decreased significantly with the drying time; it ranged from 12.3 to 8.6 and from 10.4 to 9.7 for C and DRL samples, respectively. However, DRL administration did not present significant effects on this parameter. The yellowness (b*) decreased during drying and was affected significantly (P < 0.05) by DRL incorporation at day 0 (14.9 vs. 12.6 for C and DRL samples, respectively). The results shows that the chroma (C*) indices were similar between groups except at day 0 (19.5 v 16.5 for C and DRL groups respectively; P < 0.05). The Total Viable Counts were affected (P < 0.05) by the rosemary incorporation in the ewe diet, they were lower for DRL sausage. Sausages’ eating quality was not affected by DRL administration. DRL use as animal feed and meat quality preservative should be encouraged. 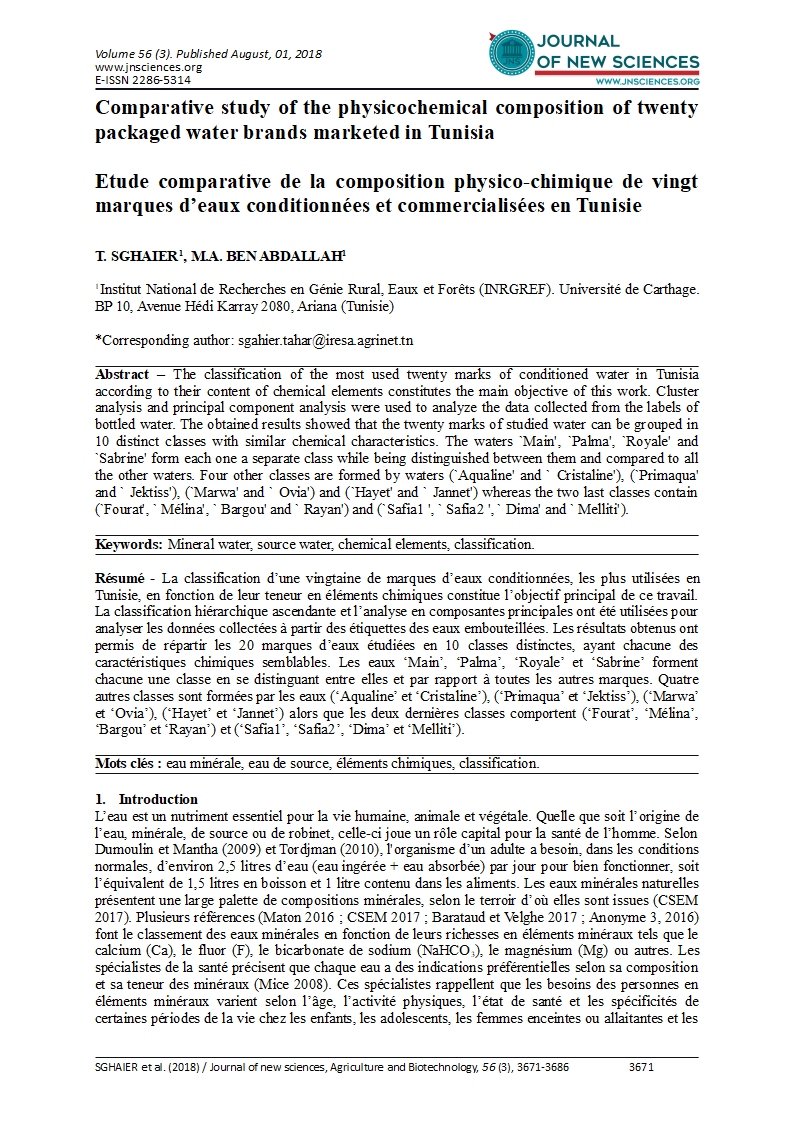 Abstract – The classification of the most used twenty marks of conditioned water in Tunisia according to their content of chemical elements constitutes the main objective of this work. Cluster analysis and principal component analysis were used to analyze the data collected from the labels of bottled water. The obtained results showed that the twenty marks of studied water can be grouped in 10 distinct classes with similar chemical characteristics. The waters `Main', `Palma', `Royale' and `Sabrine' form each one a separate class while being distinguished between them and compared to all the other waters. Four other classes are formed by waters (`Aqualine' and ` Cristaline'), (`Primaqua' and ` Jektiss'), (`Marwa' and ` Ovia') and (`Hayet' and ` Jannet') whereas the two last classes contain (`Fourat', ` Mélina', ` Bargou' and ` Rayan') and (`Safia1 ', ` Safia2 ', ` Dima' and ` Melliti'). 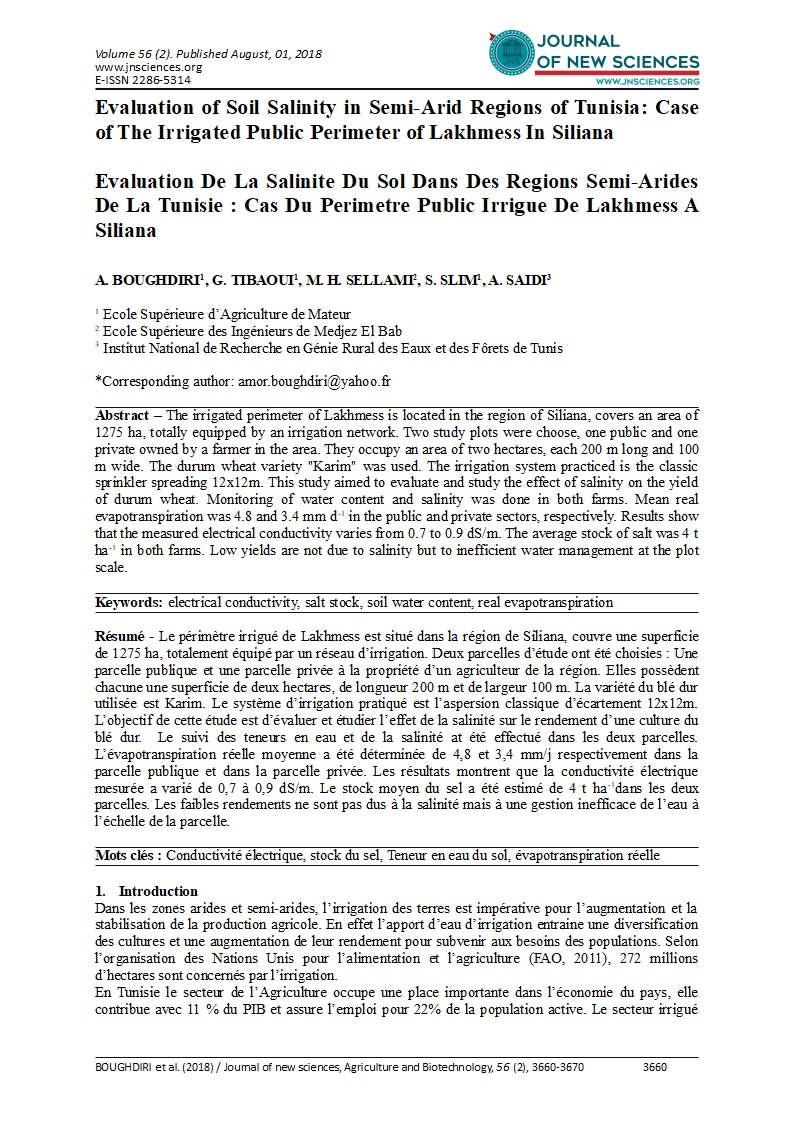 Abstract – The irrigated perimeter of Lakhmess is located in the region of Siliana, covers an area of 1275 ha, totally equipped by an irrigation network. Two study plots were choose, one public and one private owned by a farmer in the area. They occupy an area of ​​two hectares, each 200 m long and 100 m wide. The durum wheat variety "Karim" was used. The irrigation system practiced is the classic sprinkler spreading 12x12m. This study aimed to evaluate and study the effect of salinity on the yield of durum wheat. Monitoring of water content and salinity was done in both farms. Mean real evapotranspiration was 4.8 and 3.4 mm d-1 in the public and private sectors, respectively. Results show that the measured electrical conductivity varies from 0.7 to 0.9 dS/m. The average stock of salt was 4 t ha-1 in both farms. Low yields are not due to salinity but to inefficient water management at the plot scale. 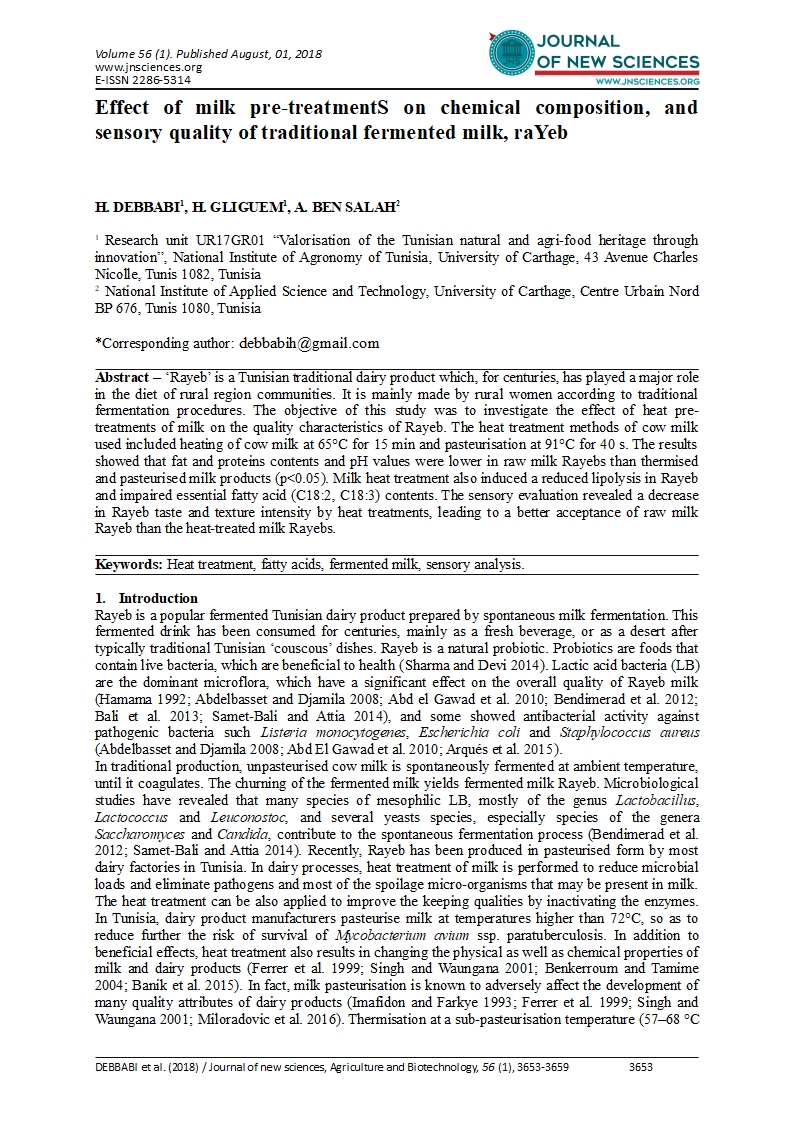 Abstract – ‘Rayeb’ is a Tunisian traditional dairy product which, for centuries, has played a major role in the diet of rural region communities. It is mainly made by rural women according to traditional fermentation procedures. The objective of this study was to investigate the effect of heat pre-treatments of milk on the quality characteristics of Rayeb. The heat treatment methods of cow milk used included heating of cow milk at 65°C for 15 min and pasteurisation at 91°C for 40 s. The results showed that fat and proteins contents and pH values were lower in raw milk Rayebs than thermised and pasteurised milk products (p<0.05). Milk heat treatment also induced a reduced lipolysis in Rayeb and impaired essential fatty acid (C18:2, C18:3) contents. The sensory evaluation revealed a decrease in Rayeb taste and texture intensity by heat treatments, leading to a better acceptance of raw milk Rayeb than the heat-treated milk Rayebs.