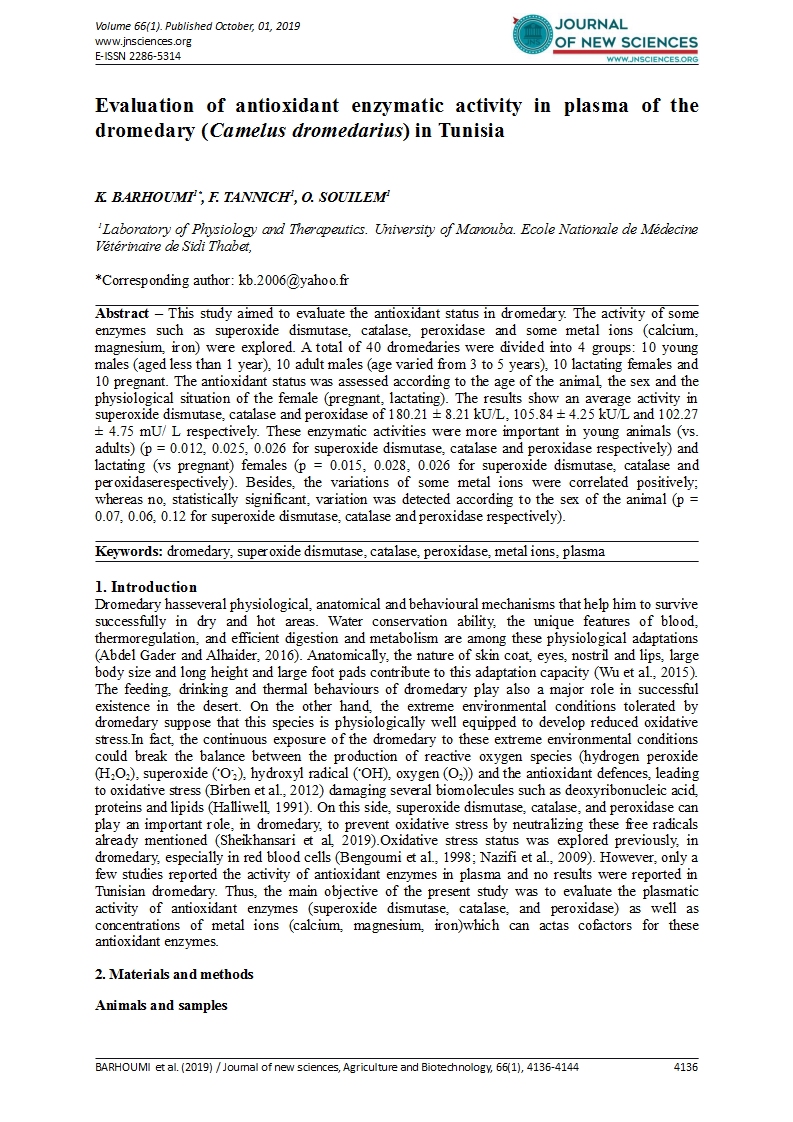 Dromedary hasseveral physiological, anatomical and behavioural mechanisms that help him to survive successfully in dry and hot areas. Water conservation ability, the unique features of blood, thermoregulation, and efficient digestion and metabolism are among these physiological adaptations (Abdel Gader and Alhaider, 2016). Anatomically, the nature of skin coat, eyes, nostril and lips, large body size and long height and large foot pads contribute to this adaptation capacity (Wu et al., 2015). The feeding, drinking and thermal behaviours of dromedary play also a major role in successful existence in the desert. On the other hand, the extreme environmental conditions tolerated by dromedary suppose that this species is physiologically well equipped to develop reduced oxidative stress.In fact, the continuous exposure of the dromedary to these extreme environmental conditions could break the balance between the production of reactive oxygen species (hydrogen peroxide (H2O2), superoxide (•O-2), hydroxyl radical (•OH), oxygen (O2)) and the antioxidant defences, leading to oxidative stress (Birben et al., 2012) damaging several biomolecules such as deoxyribonucleic acid, proteins and lipids (Halliwell, 1991). On this side, superoxide dismutase, catalase, and peroxidase can play an important role, in dromedary, to prevent oxidative stress by neutralizing these free radicals already mentioned (Sheikhansari et al, 2019).Oxidative stress status was explored previously, in dromedary, especially in red blood cells (Bengoumi et al., 1998; Nazifi et al., 2009). However, only a few studies reported the activity of antioxidant enzymes in plasma and no results were reported in Tunisian dromedary. Thus, the main objective of the present study was to evaluate the plasmatic activity of antioxidant enzymes (superoxide dismutase, catalase, and peroxidase) as well as concentrations of metal ions (calcium, magnesium, iron)which can actas cofactors for these antioxidant enzymes.

The camels used in the experiment belonged to Office des Terres Domaniales d’El Alam (Sbikha, Kairouan governorate). Blood samples were collected during the summer season from 40 camels belonging to 4 groups of 10 animals each: young males (less than 1-year-old), adult males (3 to 5 years old), pregnant females and lactating ones. The animals are raised semi-extensively in a region characterized by food scarcity and whose vegetation is dominated by grass plants.

Eight millilitres of blood were collected from the jugular vein of each camel, on a dry vacuum tube for the determination of serum parameters indicative of the antioxidant status (superoxide dismutase, catalase, peroxidase, iron, magnesium, calcium). The samples were sent under cold conditions to the laboratory. Blood samples were centrifuged at 3000 rpm for 15 minutes and sera were stored in Eppendorf tubes at -80°C until used.

Peroxidase activity was measured at 25°C using guaiacol as the hydrogen donor. The reaction mixture contained 9 mM (25 µL) guaiacol, 19 mM (100 µL) H2O2 in 50 mM (870 µL) PBS (pH 7) and 40 μL of serum. The reaction was initiated by the addition of H2O2 and monitored by measuring the increase in absorbance at 470 nm wavelength every 30s for 3 min with Zuzi spectrophotometer (Model 4201/50). Peroxidase activity was expressed as nmols of guaiacol oxidized per min and calculated using a molecular extinction coefficient of 26.2 mM-1.

Magnesium levels were determined using a commercially available kit from Biomaghreb, Tunisia. Magnesium forms a purple coloured complex when treated with calmagite in alkaline solution, measurable at 520 nm. The intensity of the purple colour is proportional to the magnesium concentration.

Plasma free iron levels were determined using a commercially available kit from Biomaghreb. Briefly, at acidic pH 4.8 all Fe3+ released from transferrin were reduced by ascorbic acid into Fe2+, which constitutes, with ferrozine, a purple colourful complex measurable at 560 nm. Briefly, 50 μL of plasma was added to 250 μL of reaction mixture containing ascorbic acid (5 g/L) and ferrozine (40 mM), and incubation was performed at 37°C for 10 min.

Three factors of variation were considered: age, sex and physiological situation of females. Results were expressed as means ± standard deviation (SD). Data were compared using unpaired Student’s t-tests or one-way analysis of variance (ANOVA). All statistical tests were 2-tailed andwere considered significant at a level 0.05(a significant difference is marked with an asterisk *).

The dromedary is a species of the desert environment which is characterized by extreme temperatures with a difference of up to 8°C between day and night; such deviations are fatal for most non-adapted mammals (Schmidt-Nielsen, 1997). This constant thermal stress should be associated with optimal antioxidant activities to counteract the deleterious effects of reactive oxygen species that can be produced consequently.

Peroxidases are selenium enzymes that catalyze the reduction of hydroperoxides and hydrogen peroxide by reduced glutathione. The permanent recycling of the latter is provided by glutathione reductase. The role of peroxidase is very important in most tissues, for example in red blood cells and platelets where it carries out the total elimination of H2O2(Sheikhansari et al., 2019). The serum activity of peroxidase, in our work (102.72 ± 5.27 mU/L) is greater than that reported in sheep (85.25 ± 2.24 mU/L) (Suzuki and Agar, 1983) and goats (74.29 ± 4.62 mU/L) (Shi et al, 2010) and lower than cattle (112.25 ± 2.78 mU/L) (Vu et al, 2012). Glutathione peroxidase activity is generally correlated with the selenium status of animals, including dromedary (El-Magawry et al., 1988). This correlation is stronger in dromedary than in cow (Bengoumi et al., 1998). The determination of glutathione peroxidase activity was performed in red blood cells and the results are expressed in U/g Hb. The first reference for glutathione peroxidase is probably El-Magawry et al. (1988) who found no significant difference between mean values ​​of 25 ± 0.64 U/g Hb in males and 23.7 ± 0.17 U/g Hb in females.

These higher values ​​of enzymatic antioxidant activities in dromedary, compared with those reported in other ruminants (sheep, goats, cattle), make dromedary less susceptible to oxidative stress, which can be generated by high temperatures in the desert. Thus, another feature of dromedary metabolism is added to many other characteristics of this species making dromedary a legend in the resistance to drought, thirst and high temperatures that are lethal for other non-adapted animals.

During the lactation period, suckling females are over-exploited to feed theiroffspring, whose survival and growth depend on mother's milk production. Thus, lactating females are prone to decreases in blood levels of glucose, fat, and proteins. This export to milkcould stimulate the activity of superoxide dismutase, catalase and peroxidase to avoid the deleterious effects of free radicals which can accumulate under these conditions of the stress of production (Hamzaoui, 2013). Generally, dromedary females are often confronted with a scarcity of food and water in their environment, but the female is able, nevertheless, to maintain a satisfactory milk production to ensure the survival of her offspring. In dromedaries subjected to water restrictions for 15 days, the liquid content in milk remains equivalent to normo-hydrated females (Bengoumi, 2005). This process of conservation of equivalent water composition in milk would form stress generating deleterious metabolites that can be neutralized by this higher activity of enzymes involved in oxidative stress, in suckling dromedary’s females. Besides, worksfocusing on antioxidant enzymatic activity in dromedary milk, reported that catalase activity was also very high compared to cow and buffalo milk: 6 ± 0, 27 U/L vs. 1 ± 0.41 U/L and 1 ± 0.23 U/L, respectively (Yoganandi et al., 2014).

This study showed an antioxidant superiority of dromedary metabolism, considering the first line of defense; superoxide dismutase and the role played by catalase and peroxidase to neutralize free radicals formed following extreme environmental conditions of the desert. Besides, the investigation, by animal category, shows an antioxidant advantage for young animals and lactating females. These results obtained could be useful for the estimation of the appropriate supplementation in mineral elements (calcium, magnesium, iron, copper, zinc, selenium...) acting as antioxidant cofactors and this according to the age of the animal and the stage of reproduction of the female for a possible adapted need, comfort and well-being of the animal in its environment. However, additional research is needed to improve our knowledge of this topic within the dromedary species.

Our thanks go to Dr. Anis Khelifi, OTD El Alam (Sbikha) of Kairouan governorate, to have facilitating animal handling and blood sampling in optimal conditions.