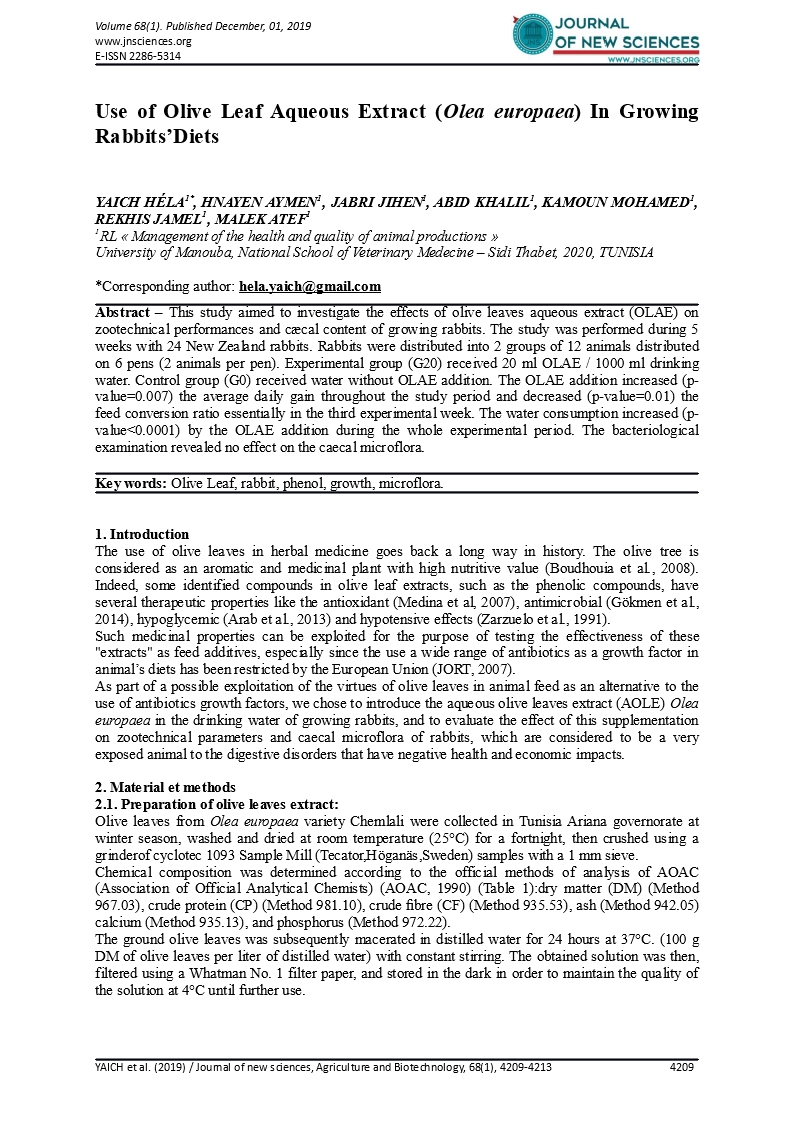 1RL « Management of the health and quality of animal productions »

Abstract – This study aimed to investigate the effects of olive leaves aqueous extract (OLAE) on zootechnical performances and cæcal content of growing rabbits. The study was performed during 5 weeks with 24 New Zealand rabbits. Rabbits were distributed into 2 groups of 12 animals distributed on 6 pens (2 animals per pen). Experimental group (G20) received 20 ml OLAE / 1000 ml drinking water. Control group (G0) received water without OLAE addition. The OLAE addition increased (p-value=0.007) the average daily gain throughout the study period and decreased (p-value=0.01) the feed conversion ratio essentially in the third experimental week. The water consumption increased (p-value<0.0001) by the OLAE addition during the whole experimental period. The bacteriological examination revealed no effect on the caecal microflora.

The use of olive leaves in herbal medicine goes back a long way in history. The olive tree is considered as an aromatic and medicinal plant with high nutritive value (Boudhouia et al., 2008). Indeed, some identified compounds in olive leaf extracts, such as the phenolic compounds, have several therapeutic properties like the antioxidant (Medina et al, 2007), antimicrobial (Gökmen et al., 2014), hypoglycemic (Arab et al., 2013) and hypotensive effects (Zarzuelo et al., 1991).

Such medicinal properties can be exploited for the purpose of testing the effectiveness of these "extracts" as feed additives, especially since the use a wide range of antibiotics as a growth factor in animal’s diets has been restricted by the European Union (JORT, 2007).

As part of a possible exploitation of the virtues of olive leaves in animal feed as an alternative to the use of antibiotics growth factors, we chose to introduce the aqueous olive leaves extract (AOLE) Olea europaea in the drinking water of growing rabbits, and to evaluate the effect of this supplementation on zootechnical parameters and caecal microflora of rabbits, which are considered to be a very exposed animal to the digestive disorders that have negative health and economic impacts.

Olive leaves from Olea europaea variety Chemlali were collected in Tunisia Ariana governorate at winter season, washed and dried at room temperature (25°C) for a fortnight, then crushed using a grinderof cyclotec 1093 Sample Mill (Tecator,Höganäs,Sweden) samples with a 1 mm sieve.

The ground olive leaves was subsequently macerated in distilled water for 24 hours at 37°C. (100 g DM of olive leaves per liter of distilled water) with constant stirring. The obtained solution was then, filtered using a Whatman No. 1 filter paper, and stored in the dark in order to maintain the quality of the solution at 4°C until further use.

The determination of total phenols amount was carried out by the Folin-Ciocalteu colorimetric method, also called the gallic acid assay (Kamoun, 2008). A volume of 0.5 ml from the obtained extract was diluted 10 times with distilled water and then added to 2.5 ml of Folin-Ciocalteu reagent. After standing for 5 minutes, the solution thus obtained was added to 2 ml of CO3 (Na)2, the whole was placed in a water bath set at 50°C for 5 minutes and then in cold water for 5 minutes. The absorbance was read by a UV spectrophotometer (UV-1201, UV-VIS Spectrophotometer, SHIMADZU) at 760 nm against gallic acid standard curves. The polyphenol contents were expressed in mg of gallic acid equivalent per gram of dry matter (mg EAG.g-1 MS).

The experiment was performed on 24 weaned rabbits from the Californian strain, aged 56 days with initial body weight 1259 ± 8 g. The rabbits were housed in 12 cages (2 rabbits per cage) and then randomly assigned to two treatments with a completely randomized design: the control group (G0) and the experimental group (G20).

Rabbits were fed on pelleted diets category (Maternity-fattening) (Table 2) distributed ad libitum each morning. For the drinking water, the control group (G0) received water without extract and the experimental group (G20) received a drinking water supplemented with OLAE at a dose equal of 20mL of OLAE / L of water.

During the experimental period, water consumption (ml/d) and feed consumption (g/d) were recorded daily. Live weight (kg) was weekly recorded. The average daily gain (ADG) for each rabbit was calculated by subtracting the final body weight from the initial and then divided by the duration of the period. The consumption index (CI = DM ingested / ADG) was also calculated.

At the last day of the experiment (13 weeks of age), five rabbits from each group were slaughtered. Their caeca are collected and stored at 4 °C for further analysis. The microbiological analyzes consisted to enumerate the total germs and Escherichia coli in the ceacal flora.

All experimental procedures have been approved by the Ethics Committee in Animal Experimentation (National School of Veterinary Medicine of Sidi Thabet, TUNISIA / CEEA-ENMV 02/19).

A sample of 10 ml from the caecal content is mixed with 90 ml of sterile peptized water after homogenization. The obtained solution was diluted from 100 times for the petri dishes seeding. The microflora counting requires a deep seeding process of 1 ml of the chosen solution on PCA agar plates. The dishes were incubated at 30 ° C for 72 hours (Norm ISO 4833-1 :2013). For enumeration of E. coli, a volume of 1 mL of chosen solution (surface or bulk method) is seeded on the selective medium "Tryptone Bile X-Glucuronide" (TBX) (Norm ISO 16649-2 :2001). The dishes were incubated for 4 hours at 30 ° C, then 18 hours at 44 ° C. The result was expressed in (log10cfu / g).

Data averages were compared using the analysis of variance (ANOVA) by using the SAS® Studio 3.6 (2017) statistical analysis software. Means were declared significantly different from each other when the p-value was less than 5%, while the trends to be significant was reported at 0.1> P> 0.05.

According to (Salah et al., (2012) the phenol extraction technique, the nature of the used solvent, the climatic conditions and the drying temperature of the olive leaves as well as the olive variety represent major factors of variation that can influence the total phenol content.

3.2. Effect of OLAE on zootechnical parameters:

The OLAE incorporation into drinking water was accompanied by a significant increase (p<0.0001) in water consumption for the G20 subjects as compared to G0 during all over the entire experiment period (Table 3). (Chabbouh, 2010) has shown that the incorporation of OLAE in growing rabbits leads to a significant increase in water consumption with increasing concentration of olive leaves extract.

The increase in water consumption because of phenolic compounds supplementation has been reported for broiler chickens. In fact, (Ramon et al.,( 2015) have shown that the use of Mexican oil of oregano, a product rich in phenolic compounds, was accompanied by a proportional increase of water intake.

The addition of OLAE in rabbit drinking water resulted in a decrease (p <0.001) in feed consumption and an increase (p = 0.007) in average daily gain during the entire experimental period. Live weight of G20 subjects was higher than G0 subjects (p≤ 0.001). Thus, the consumption index recorded for each week was lower for G20 as compared to the control group (G0) especially during the W12 (p <0.0001).

The obtained results (Table 4) shown that the incorporation of OLAE into the drinking water of growing rabbits optimizes the zootechnical performances of the animals and the food efficiency.

(Saeb and Muntaha, (2007) have shown that the incorporation of olive leaf extract into water or leaf mill mash into the diet improved the rabbit live weight and feed efficiency. This effect was also studied by (Chabbouh, (2010), which showed that the incorporation of OLAE into the drinking water of rabbits at increasing doses respectively 20 and 40mL / L of drinking water was accompanied by a decrease (p <0.001) in the consumption index and an increase (p <0.001) in the total ADG and live weight as compared to the control group without having a difference between the two used concentrations.

In poultry, (Jabri et al., (2017) and (Oke et al., (2017) reported that the use of OLAE in broilers leads to an improve in feed utilization and animal performances.

For laying hens, (Rezar et al., (2015) found no effect on egg quality by the use of olive leaf powder (OLP) for 8 weeks in animals diet containing 0, 1%, 2%, or 3% of OLP. Cayan and Erener., 2015 have used the olive leaf in powdered form for laying hens and have shown that this supplementation had no effect on feed consumption, egg weight, yield of egg and feed conversion index (p> 0.05), nevertheless this powder makes it possible to increase the final body weight of hens (p <0.05).

3.4. Effect of OLAE on caecal microbiota:

The results of the microbiological analyzes reported in Table 5 shown that the use of OLAE results in a decrease (p> 0.05)of microflora (MF) and E.coli (EC) at the level of caeca for G20 subjects as compared to G0 subjects.

The results of the study conducted by Chabbouh., 2010 showed a significant decrease in microflora (MF) and total coliformsof which E. coli belongs in rabbits by using the OLAE. This reduction is all the more important as the concentration of the polyphenol extract is high.

This antimicrobial activity has been studied also in poultry and humans. (Şenayet and Dursen., 2016) have shown that the use of olive leaf extract at the level of 100 and 200 mg oleuropein per kilogram of feed in poultry had no effect on the total germs. In contrast, these concentrations were not very effective in reducing total coliform loading and increasing lactobacilli in the ileal portion of the intestine.

The results of the present study show that the olive leaves aqueous extract represents an excellent source of total phenols. Indeed, the incorporation of this extract was accompanied by an improvement of the feed efficiency and growth of rabbits. The use of OLAE may have beneficial effects on the performances of rabbits.The concentrations used did not result in a significant reduction in the microbial load of the coecum.

Rezar V, Levart A, Salobir J (2015) The effect of olive by products and their extracts on antioxidative status of laying hens and oxidative stability of eggs enriched with n-3 fatty acids. PoljoPrivreda, 21, 1, Supplement, 216-219.