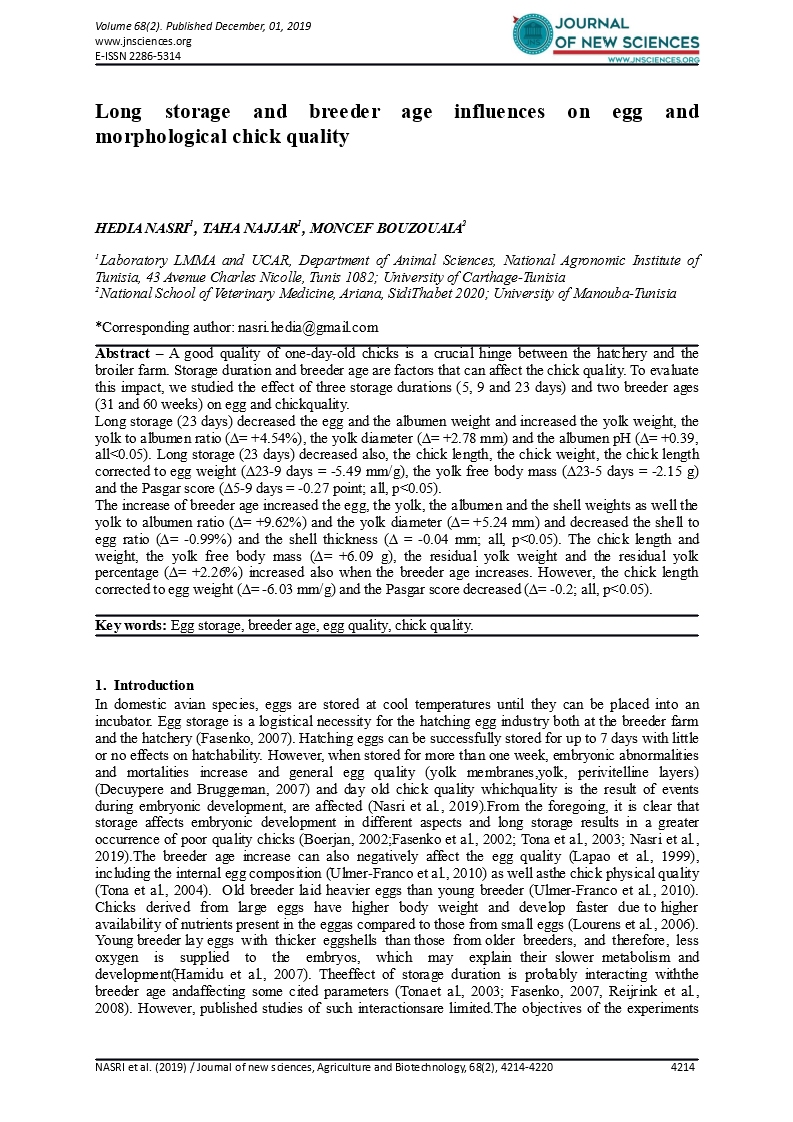 In domestic avian species, eggs are stored at cool temperatures until they can be placed into an incubator. Egg storage is a logistical necessity for the hatching egg industry both at the breeder farm and the hatchery (Fasenko, 2007). Hatching eggs can be successfully stored for up to 7 days with little or no effects on hatchability. However, when stored for more than one week, embryonic abnormalities and mortalities increase and general egg quality (yolk membranes,yolk, perivitelline layers) (Decuypere and Bruggeman, 2007) and day old chick quality whichquality is the result of events during embryonic development, are affected (Nasri et al., 2019).From the foregoing, it is clear that storage affects embryonic development in different aspects and long storage results in a greater occurrence of poor quality chicks (Boerjan, 2002;Fasenko et al., 2002; Tona et al., 2003; Nasri et al., 2019).The breeder age increase can also negatively affect the egg quality (Lapao et al., 1999), including the internal egg composition (Ulmer-Franco et al., 2010) as well asthe chick physical quality (Tona et al., 2004). Old breeder laid heavier eggs than young breeder (Ulmer-Franco et al., 2010). Chicks derived from large eggs have higher body weight and develop faster due to higher availability of nutrients present in the eggas compared to those from small eggs (Lourens et al., 2006). Young breeder lay eggs with thicker eggshells than those from older breeders, and therefore, less oxygen is supplied to the embryos, which may explain their slower metabolism and development(Hamidu et al., 2007). Theeffect of storage duration is probably interacting withthe breeder age andaffecting some cited parameters (Tonaet al., 2003; Fasenko, 2007, Reijrink et al., 2008). However, published studies of such interactionsare limited.The objectives of the experiments described herein were aimed at determining the influence of storage duration, broiler breeder age and their interaction on egg and chick qualities.

In total,14500 eggs were collected at the same day from three commercial broiler breeder flocks (Arbor Acres), reared in the same conditions as describedby the breeding guide(Aviagen, 2018). Breeder flock ages were 31 and 66 weeks. Collected eggs were stored in the hatchery in the same conditions. The storage temperature was 16.5°C and the relative humidity was 70%. The experiment was performed at the Poulina hatcheryatSaouef, Tunisia during the months of October andNovember 2016.

After 5 and 23 days of storage, 25 eggs per breeder flock age were sampled for egg characteristics (100 eggs in total). Eggs were weighed and thereafter broken onto a flat surface where yolk diameter was determined with an electronic digital caliper (Matrix, Guangdong, China). The albumen was separated from the yolk using a sharp spoon. The yolk was enrolled on absorbenttowel to eliminate the rest of albumen and then weighted.Thereafter, the albumen was homogenized separately and its pH was measured immediately with an electronic pH meter (Ohaus, ST2100-F, Parsippany, USA). Shell weight was measured after washing and drying for 24 hours at room temperature. The shell thickness was then determined for the two flocks at 5 days of egg storageusing an electronic digital caliper (Matrix, Guangdong, China). For this parameter we evaluated only breeder age impact as the limited impact of storage duration (Samli et al., 2005; Addo et al., 2018). The weight of the albumen was calculated as the difference between the weight of the egg and the weight of the yolk plus the shell. The yolk to albumen ratio was calculatedas ((yolk weight/ albumen weight)*100) and the shell to egg ratio was calculated as((shell weight /egg weight)*100).

The rest of theeggs (14400 eggs) were divided into 96 incubation trays of 150 eggs per tray. Each tray contained eggs of one breeder flock and one storage duration. The eggs, placed on incubation trolleys,were stored in the same room. After 5, 9 and 23 days of storage, 16 trays per breeder flock age were incubated. The trays were divided over four incubation trolleys with four trays per breeder age per trolley;the trays being arranged alternatively on trolleys. The four trolleys per storage duration were then placed intwo identical Petersime incubators (BioStreamer™, Zulte, Belgium, capacity of 57600 eggs) with 2 trolleys per incubator. All incubators were set at an incubation temperature of (37.78°C). Relativehumidity was maintained at an average of 84%. Carbon dioxide level was maintained below 0.85%. Eggs were turned hourly at an angle of 90o.

At 18 days of incubation, all eggs were transferred into hatching crates and moved to hatchers. The same order of trays applied in setters was applied for hatching crates in the hatchers.For each egg storage duration,two Petersime hatchers (BioStreamer™, Zulte, Belgium, capacity of 19200 eggs) were used. All hatchers were set at an incubation temperature (36.67°C). Relative humidity was maintained at an average of 85.50%. Carbon dioxide level was maintained below 1.00%. At 510 hours post-incubation, thechicks were collected from the hatcher.

Data was processed using the statistical software SAS version 9.1 (2004). For eggquality parameters, hatching weight, hatching length and organweight data,a General linear model (GLM) was performed; the experimental unit for egg parameters being the egg. The experimental unit for chick weight, chick length and organweight was the chick. The model used for these variables was:

Theresultsconcerning the egg quality traits are presented in Table 1. No significant effect of the interaction between the storage duration and the breeder age,was noted in regards tothe different studied parameters related to the egg quality(p>0.5).

a– b:LSM within a column and factor lacking a common superscript differ (P ≤0.05).

Long storage increased the yolk diameter (∆= +2.78 mm) which may be a result of the weakness of chalazae and vitelline layer that hold the yolk in position and absorb any shocks and jerks to eggs (Alade et al., 2013). Long storage increased also the albumen pH (∆= +0.39). This result is consistent with Lapao et al. (1999) who noted an increase of the albumen pH from 9.00 to 9.12 points with an increase of the storage duration from 4 to 8 days. This increase was related to the loss of CO2 (Stadelman, 1995). As albumen pH increases, the bicarbonate buffering system equilibrium shifts (Heath, 1977). The increase of breeder age increased the egg weight (∆= -1.32 g), the yolk weight (∆= +6.40 g), the albumen weight (∆= +5.72 g), the shell weight (∆= +0.54 g), the yolk to albumen ratio (∆= +9.62%) and the yolk diameter (∆= +5.24 mm) and decreased the shell to egg ratio (∆= -0.99%). This is consistent with Kontecka et al. (2012) who reported an increase in the egg weight by an averageof 2.5 g per 5 weeks of breeder age, corresponding to an increase in the yolk and the albumen weights by 1.3 g and 1.1 g, respectively. The amount of shell increased also with breeder age until week 45. However, when considered as a percentage of the egg, the shell and the albumen decreased with the increase of the hen age (Silversides and Scott, 2001), which reveals a higher increase of the yolk weight as compared to that of thealbumen. It has been suggested that the increase in the egg size with breeder age is a consequence of a decrease in egg production, which is partly caused by a reduction in the number of follicles reaching the final phase of therapid growth (Johnson, 2000). Because fewer follicles receive a proportionately greater quantity of yolk, the yolk size of old flock eggs increases at a higher rate as compared to theincrease of thealbumensize, resulting in a decreased proportion of albumen content (Johnston and Gous, 2007).The increase of breeder age decreased the shell thickness (∆ = -0.04 mm). Roland (1980) associated this decrease to an increase in egg size without a concurrent increase in calcium carbonate deposition. The shell thickness decrease could be one of thereasons of the albumen pH increase (∆= +0.05 points) with breeder age. In fact, Meijerhof (1994) explain this pH increase by the lower shell quality leading to a higher shell conductance in eggs from older hens that would lead toa more rapid release of carbon dioxide from the egg.

The results regarding thechick quality traits are presented in Table 2. The interaction between storage duration and breeder age had no influence on the monitored parameters related to chick quality (p>0.05).

a– b: LSM within a columnand factor lacking a common superscript differ (P ≤0.05).

The Pasgar scoredecreased from 5 to 9 days (∆5-9 days = -0.27 point; p= 0.01). However, the Pasgar scorerecorded with 23 days of storage was in the middle.The results concerning the impact of storage on chick quality are conflicting. Many authors reported that the egg storage beyond 7 days was associated with a decline in chick quality (Byng and Nash, 1962; Tona et al., 2003, 2004; Decuypere and Bruggeman, 2007) in terms of physical parameters on the day of hatch such as appearance, activity, and quality of the navel area (Tona et al., 2003). However, Safaa et al. (2013) reported no significant effects on chick quality,in response to thestorage duration increase up to 10 days.The same result was reported by Pokhrel et al. (2018) on eggs stored for 7, 14 and 21 days.

The increase of the breeder age increased the chick length (∆31-60 weeks = +0.55 mm; p<0.0001), the chick weight (∆31-60 weeks = +7.91 g; p<0.0001)and the yolk free body mass (∆31-60 weeks = +6.09 g; p<0.0001). These results are consistent with those of Iqbal et al. (2016) who reported an improvement of chick weight and chick length with advancing age of broiler breeder. This improvement was explained by the higher resistant of chicks from old breeder to dehydration upon hatching as compared to smaller chicks from young breeder flocks. However, Nangsuay et al. (2013) did not find any differences in the yolk free body masswhen evaluating breeders of different ages (29 and 53 weeks) having similar egg weights. This result confirmed the suggestion of Sklan et al. (2003) that heavier eggs produce heavier chicks and the chick body weight and the yolk free body mass are directly related to the amount of nutrients available in the egg. This is in line with our results concerning the absence of breeder age impact on thechick body weight corrected to the eggweight.

The increase of the breeder age increased the residual yolk weight (∆31-60 weeks = +1.83 g; p<0.0001) and the residual yolk percentage (∆31-60 weeks = +2.26%; p<0.0001). These results agree with the findings of Araújo et al. (2016) who determined a higher yolk sac weight (3.52 g vs. 5.06 g) and relative yolk sac weight (8.64% vs. 10.55%) in chicks from older hens (59 weeks)as compared to young hens (35 weeks). These results can be explained by the higher yolk energy content available in old flock eggs that can probably be related to the yolk nutrient density and especially to the yolk size. These results suggest that older flock hens deposit more yolk and fat in their eggs, particularly in large eggs, than younger flock hens. Consequently, more nutrients will be used for conversion to yolk free body mass with olderbreeder than youngerones(Nangsuay et al., 2013).

Long storage has negative impact on egg quality and on day old chick quality from both, old and young breeders. The manipulation of the storage conditions (Temperature, Humidity …) could be one of solutions to moderate these negative impacts.

The increase of breeder age increased thevitelline reserve for the embryo by increasing the yolk weight and percentage, which contribute to obtain heavier chicks. However, the one-day-oldchick quality based on thePasgar score decreased with the increase of the breeder age.