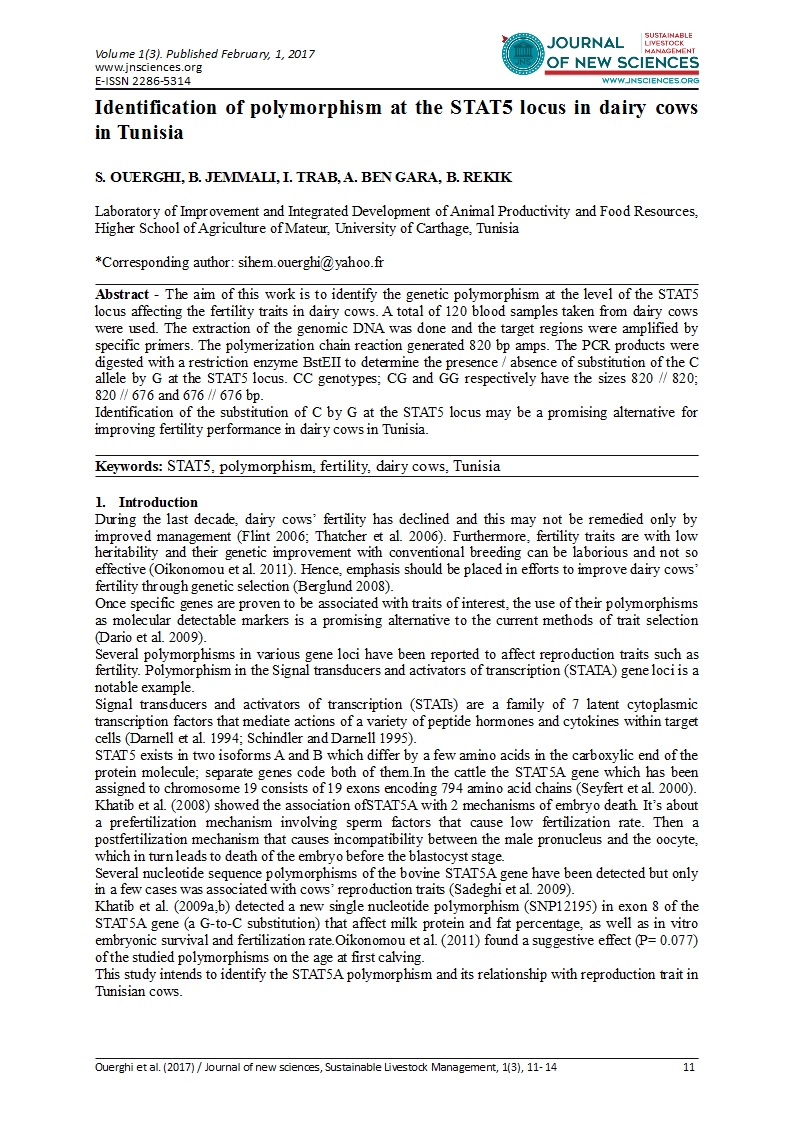 Laboratory of Improvement and Integrated Development of Animal Productivity and Food Resources, Higher School of Agriculture of Mateur, University of Carthage, Tunisia

Abstract - The aim of this work is to identify the genetic polymorphism at the level of the STAT5 locus affecting the fertility traits in dairy cows. A total of 120 blood samples taken from dairy cows were used. The extraction of the genomic DNA was done and the target regions were amplified by specific primers. The polymerization chain reaction generated 820 bp amps. The PCR products were digested with a restriction enzyme BstEII to determine the presence / absence of substitution of the C allele by G at the STAT5 locus. CC genotypes; CG and GG respectively have the sizes 820 // 820; 820 // 676 and 676 // 676 bp. Identification of the substitution of C by G at the STAT5 locus may be a promising alternative for improving fertility performance in dairy cows in Tunisia.

During the last decade, dairy cows’ fertility has declined and this may not be remedied only by improved management (Flint 2006; Thatcher et al. 2006). Furthermore, fertility traits are with low heritability and their genetic improvement with conventional breeding can be laborious and not so effective (Oikonomou et al. 2011). Hence, emphasis should be placed in efforts to improve dairy cows’ fertility through genetic selection (Berglund 2008).

Once specific genes are proven to be associated with traits of interest, the use of their polymorphisms as molecular detectable markers is a promising alternative to the current methods of trait selection (Dario et al. 2009).

Several polymorphisms in various gene loci have been reported to affect reproduction traits such as fertility. Polymorphism in the Signal transducers and activators of transcription (STATA) gene loci is a notable example.

Signal transducers and activators of transcription (STATs) are a family of 7 latent cytoplasmic transcription factors that mediate actions of a variety of peptide hormones and cytokines within target cells (Darnell et al. 1994; Schindler and Darnell 1995).

STAT5 exists in two isoforms A and B which differ by a few amino acids in the carboxylic end of the protein molecule; separate genes code both of them.In the cattle the STAT5A gene which has been assigned to chromosome 19 consists of 19 exons encoding 794 amino acid chains (Seyfert et al. 2000).

Several nucleotide sequence polymorphisms of the bovine STAT5A gene have been detected but only in a few cases was associated with cows’ reproduction traits (Sadeghi et al. 2009).

Khatib et al. (2009a,b) detected a new single nucleotide polymorphism (SNP12195) in exon 8 of the STAT5A gene (a G-to-C substitution) that affect milk protein and fat percentage, as well as in vitro embryonic survival and fertilization rate.Oikonomou et al. (2011) found a suggestive effect (P= 0.077) of the studied polymorphisms on the age at first calving.

This study intends to identify the STAT5A polymorphism and its relationship with reproduction trait in Tunisian cows.

Blood samples were collected by EDTA-anticoagulatedvacutainer tubes from 120 cross-breed cows via venipuncture from Jugular vein. The samples were stored at -21°C for further DNA extraction.

DNA was extracted from whole blood samples using the NucleoSpin Blood kit (analytikjena, Germany) according to manufacturer’s instructions. The integrity of the DNA samples was examined by electrophoresis on a 1% agarose gel.

STAT5A genotypes were identified according to Khatib et al. (2008). The following sequences of the forward and reverse primers were used for the amplification of SNP12195 (G/C) of the STAT5A (GenBank accession number NC_007317): 5’-GAGAAGTTGGCGGAGATTATC-3’and 5’-CCGTGTGTCCTCATCACCTG-3’.

The PCR products were digested with (1ul) 10 U of BestEII (Gibco BRL, life Technologies, USA) at 37°C for at least 12h then resolved by electrophoresis on 2.5% agarose gels and stained with ethidium bromide.

In this study PCR amplification with special forward and reverse primers generated a 820bp fragment from STAT5A gene.

Oikonomou et al. (2011) reported that STAT5Apolymorphism (G-to-C substitution)lead to a decrease in the age at first calving (AGE_1-CALV) by 7.21 ± 4.068 days. This suggestive effect (P< 0.077) revealed that CC cows tended (P< 0.10) to have their first calving 16.1 ± 9.1 days later than GG cows. The dominance effect of the G allele at this locuscan be considered since the differences between GG and GC genotypeswere negligible.

The association of the STAT5A polymorphism with fertility traits showed in previous study and its existence in Tunisian dairy cattle make it an attractive candidate gene for genetic improvement programs.