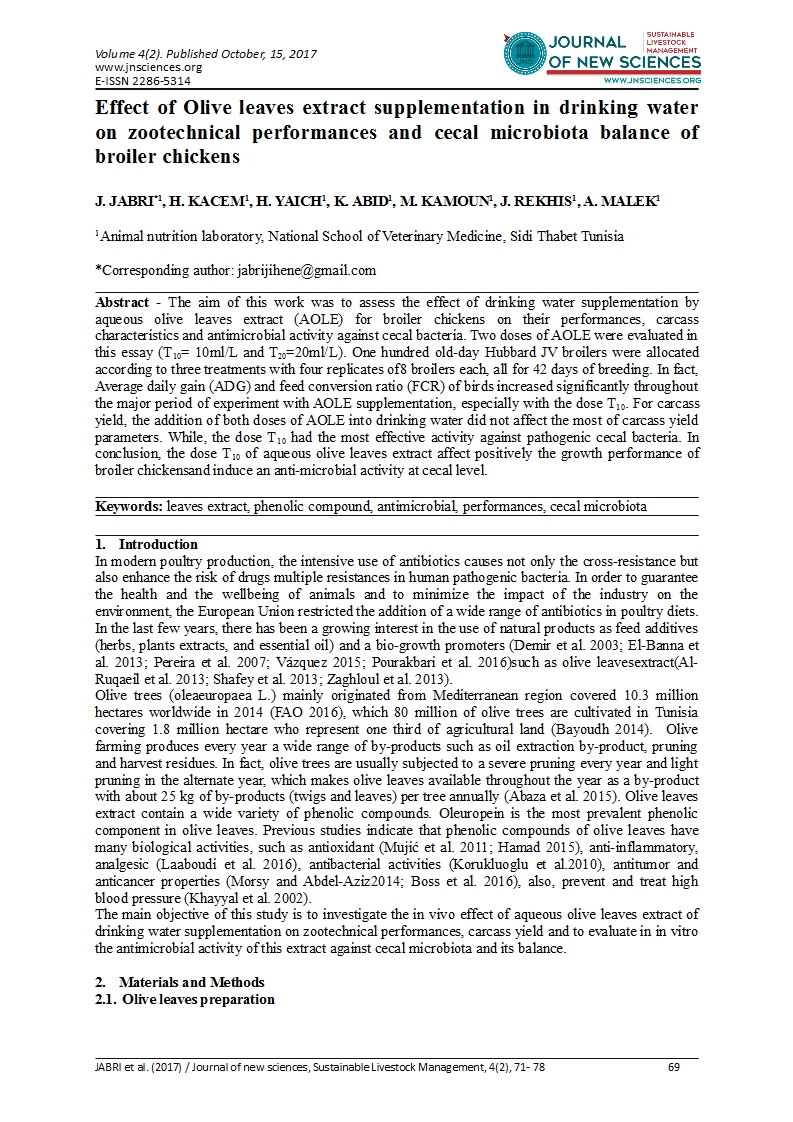 Abstract - The aim of this work was to assess the effect of drinking water supplementation by aqueous olive leaves extract (AOLE) for broiler chickens on their performances, carcass characteristics and antimicrobial activity against cecal bacteria. Two doses of AOLE were evaluated in this essay (T10= 10ml/L and T20=20ml/L). One hundred old-day Hubbard JV broilers were allocated according to three treatments with four replicates of8 broilers each, all for 42 days of breeding. In fact, Average daily gain (ADG) and feed conversion ratio (FCR) of birds increased significantly throughout the major period of experiment with AOLE supplementation, especially with the dose T10. For carcass yield, the addition of both doses of AOLE into drinking water did not affect the most of carcass yield parameters. While, the dose T10 had the most effective activity against pathogenic cecal bacteria. In conclusion, the dose T10 of aqueous olive leaves extract affect positively the growth performance of broiler chickensand induce an anti-microbial activity at cecal level.

In modern poultry production, the intensive use of antibiotics causes not only the cross-resistance but also enhance the risk of drugs multiple resistances in human pathogenic bacteria. In order to guarantee the health and the wellbeing of animals and to minimize the impact of the industry on the environment, the European Union restricted the addition of a wide range of antibiotics in poultry diets. In the last few years, there has been a growing interest in the use of natural products as feed additives (herbs, plants extracts, and essential oil) and a bio-growth promoters (Demir et al. 2003; El-Banna et al. 2013; Pereira et al. 2007; Vázquez 2015; Pourakbari et al. 2016)such as olive leavesextract(Al-Ruqaeil et al. 2013; Shafey et al. 2013; Zaghloul et al. 2013).

The main objective of this study is to investigate the in vivo effect of aqueous olive leaves extract of drinking water supplementation on zootechnical performances, carcass yield and to evaluate in in vitro the antimicrobial activity of this extract against cecal microbiota and its balance.

Fresh Olive leaves (OL) were collected from olive trees (Oleo europea L.) and washed with water to eliminate any trace of dust. An immediate dehydration was processed using a traditional method of shade drying for ten days in the laboratory at room temperature (20-25°C). This technique aims to stabilize vegetal material and to avoid quality losses during storage (Ahmad-Qasem et al. 2013) and to avoid the interference of water (Bahloul et al. 2009) during the process of phenolic compounds extraction which will be used as a feed additive in this experiment. Dried OL was ground in a Wiley mill to pass through 1 mm sieve.

Phenolic compound extraction from olive leaves is affected by the type of the solvent in the extraction process (Altiok et al. 2008). In this experiment, distilled hot water was used as a solvent to extract phenolic compounds from olive leaves powder. Aqueous Olive leaves extract (AOLE) is obtained by soaking OL powder in distilled water at 10% concentration (w/v, 100g powder OL per liter of distilled water) for 24 hours at 37°C with continuous agitation. The obtained solution is filtered and then stored at 4°C for ulterior uses.

The total phenol contents of extracts was determined using the colorimetric Folin-Ciocalteu assay (Kamoun 2008). An aliquot of 0.5 ml from five times diluted aqueous extracts was reacted with 2.5 ml of 10% Folin reagent in test tubes. After few minutes, 2 ml of 7.5% sodium phosphate solution was added. Test tubes were incubated at 50°C for 5min in water bath. Absorbance measurements were taken using an UV-spectrophotometer at 760nm. The total phenol content was expressed as mg gallic acid equivalent (GAE) per ml of extract solution.

2.3. The effect of incorporation of OLE in drinking water of Broiler chickens

A total of 100 one-day chickens Hubbard JV strain were purchased from the hatchery of agricultural training center of poultry sector inSidi-Thabet, Tunisia to evaluate the effect of drinking water supplementation with olive leaves extract. Chickens were randomly divided intothree groups receiving three treatments (Control, T10 and T20). Each group was divided into fourpensof 8chickens receiving the same amount of AOLE (four replications per treatment). Each pen containsa feeder and a drinker that allow to control and to measure the amount of feed and water daily consumed, 75w bulb for lightening (24h), static ventilators, and the floor was covered with woodchips. Feed and water were providedad libitum throughout the 42 days of trial period.

The group of chickens that receive a drinking water without any supplement was considered as a control group (C).

A commercial feeding program was applied. In fact, a starter diet (CF1) was used until the chicks were 14 days old followed by a grower diet (CF2) up to 28 days of age, and then a finisher diet (CF3) until the end of the experiment. Chemical composition of the three diets was reported in table 1.

Body weight (BW, g/week) and Average daily gain (ADG, g/day) was weekly measured individually during the essay. Rate death was recorded for each group during the experiment period.

At the end of the essay, five birds from each group were slaughtered and eviscerated. The weight of viscera, liver and heart, digestive tract and carcass after evisceration were determined individually.

2.4. Determination of the in vitro antimicrobial effect on cecal microbiota

The cecum of five broiler chickens was dissected and their content was collected in a sterilized tubes. From each tube, a sample of 10g from the homogenized content was diluted with peptone water. Thereafter, 1ml was extracted from 10-4, 10-6, 10-8 dilutions and diffused into Petri dishes containing the adequate culture medium.

The data were subject to an analysis of variance (ANOVA) and the means were compared with the Duncan test (Duncan 1955). Means were considered significantly different between them when the p-value was less than 0.05. The GLM procedure of SAS 9.1 (SAS Institute Inc., Cary, NC) was used in the statistical analyses.

Total phenolic content in OLE was 154.2 mg GAE per ml of aqueous solution. Other studies on eight varieties of olive tree grown in Tunisia found a mean of total phenols in olives leaves extract ranged from 73.05 to 144.19(Salah et al. 2012). Total phenolic compound depends on olive varieties, which affect the content of the antimicrobial agents presents in the extracts as proved by Ranalli et al. (2006).

The effects of two doses of Olive leaves extract on feed conversion ratio (FCR), average daily gain (ADG), total gain (TG) and mortality relative to the control are presented in Table 2. Water supplementation of AOLE improves broiler chickens performances (ADL, TG and FCR) in different period of experimentation. In detail, the average daily gain (ADG) of broiler chickens increased significantly (p-value <0.05) starting from the third to the fifth week of breeding, especially with the dose T10. In addition, feed conversion ratio (FCR) decreased significantly in the second and the third week with the same dose (T10). This results could indicates that the supplementation of AOLE with the dose 10ml/L in water optimize the efficiency of animals to better use the diets.

The use of Aqueous olive leaves extract had a significant positive effect on mortality rate, in fact, it decreases the mortality of broiler chickens how passed from 7.74% to 2.34 and 2.94 % respectively for T10 and T20. AOLE could have some antimicrobial activity against some cecal pathogenic bacteria (Table 4).

The effect of drinking water supplementation with aqueous olive leaves extract (AOLE) on weight of viscera and offal and yield at slaughter relative to the control are present as follow in table 3. In fact, results from this study indicate that the addition of two doses of AOLE to drinking water did not affect most of carcass yield parameters with both doses (T10 and T20). Similar results was observed in the study of (Shafey et al.2013), who reported that diet with OLE supplementation did not affect significantly the small intestine measurement and weight of eviscerated carcass and its components of broiler chickens slaughtered at 21 and 36 days of age . Whereas, Wezyk et al. (2000) reported that the use of other herbs as antibiotic growth promoters decrease the body weights and increase significantly the carcass yield and carcass fatness of broiler chickens.

3.4. In vitro antimicrobial activity of AOLE against cecal microbiota

The in vitro assay results of antimicrobial activity of AOLE against cecal microbiota of broiler chickens relative to the control are presented in Table 4.

In fact, aqueous olive leaves extract had the most effective activity (p-value <0.05) against cecal pathogenic bacteria (total germs and coliforms) with the dose 10ml/l. Additionally, it stimulates significantly the growth of lactobacillus.

The present study indicates that OLE as natural feed additive may be used as a growth promoter for broiler chickens. Aqueous olive leaves extract has an effective microbial activity against cecal pathogenic bacteria with the dose 10ml/l in drinking water, which stimulates the growth of lactobacillus and improves zootechnical performances of birds. Although, drinking water supplementation of AOLE have no significant effect on viscera and offal weight and on the yield at slaughter. Therefore, more research has to be made to determine the minimal effective dose of OLE supplemented in drinking water of broiler chickens to enhance performance and sanitary status of animals.