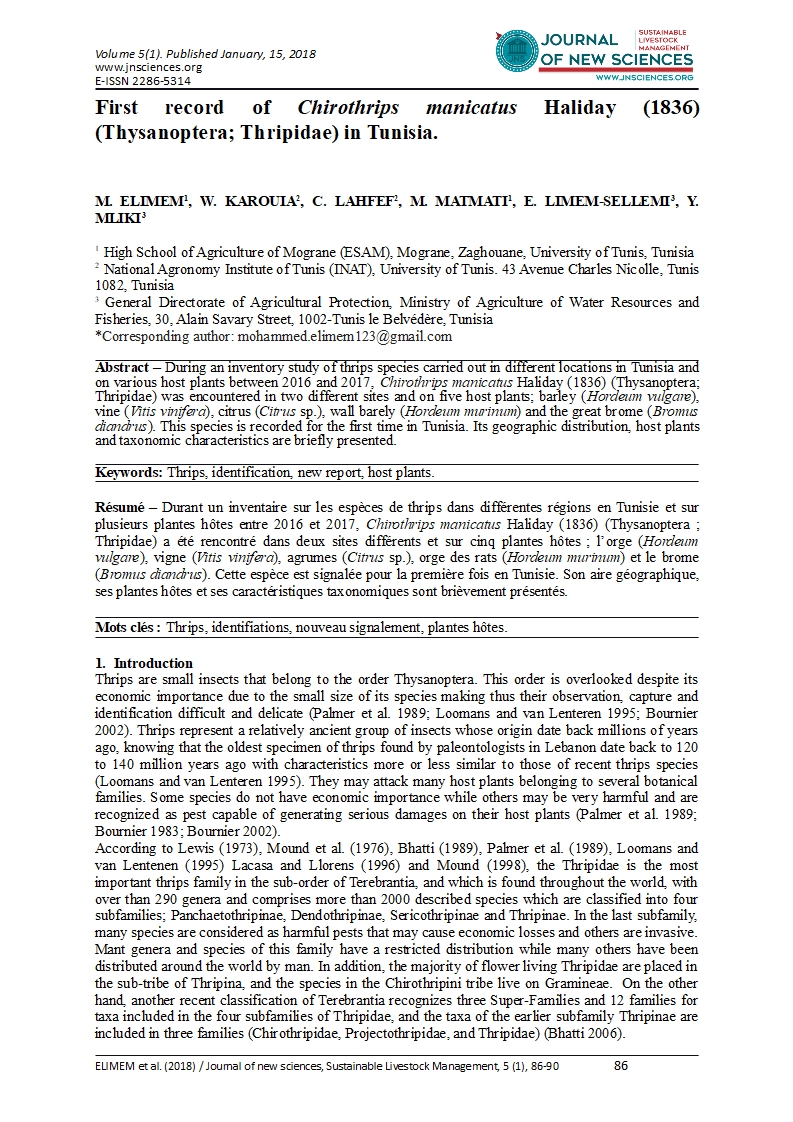 Abstract – During an inventory study of thrips species carried out in different locations in Tunisia and on various host plants between 2016 and 2017, Chirothrips manicatus Haliday (1836) (Thysanoptera; Thripidae) was encountered in two different sites and on five host plants; barley (Hordeum vulgare), vine (Vitis vinifera), citrus (Citrus sp.), wall barely (Hordeum murinum) and the great brome (Bromus diandrus). This species is recorded for the first time in Tunisia. Its geographic distribution, host plants and taxonomic characteristics are briefly presented.

Thrips are small insects that belong to the order Thysanoptera. This order is overlooked despite its economic importance due to the small size of its species making thus their observation, capture and identification difficult and delicate (Palmer et al. 1989; Loomans and van Lenteren 1995; Bournier 2002). Thrips represent a relatively ancient group of insects whose origin date back millions of years ago, knowing that the oldest specimen of thrips found by paleontologists in Lebanon date back to 120 to 140 million years ago with characteristics more or less similar to those of recent thrips species (Loomans and van Lenteren 1995). They may attack many host plants belonging to several botanical families. Some species do not have economic importance while others may be very harmful and are recognized as pest capable of generating serious damages on their host plants (Palmer et al. 1989; Bournier 1983; Bournier 2002).

According to Lewis (1973), Mound et al. (1976), Bhatti (1989), Palmer et al. (1989), Loomans and van Lentenen (1995) Lacasa and Llorens (1996) and Mound (1998), the Thripidae is the most important thrips family in the sub-order of Terebrantia, and which is found throughout the world, with over than 290 genera and comprises more than 2000 described species which are classified into four subfamilies; Panchaetothripinae, Dendothripinae, Sericothripinae and Thripinae. In the last subfamily, many species are considered as harmful pests that may cause economic losses and others are invasive. Mant genera and species of this family have a restricted distribution while many others have been distributed around the world by man. In addition, the majority of flower living Thripidae are placed in the sub-tribe of Thripina, and the species in the Chirothripini tribe live on Gramineae. On the other hand, another recent classification of Terebrantia recognizes three Super-Families and 12 families for taxa included in the four subfamilies of Thripidae, and the taxa of the earlier subfamily Thripinae are included in three families (Chirothripidae, Projectothripidae, and Thripidae) (Bhatti 2006).

Regarding the genus Chirothrips, it is a distinctive genus with around 53 to 65 species identified worldwide (Mound 2009; Mound and Kibby 1998). Many of these species are found in the Holarctic region, but there are others which are native to the Ethiopian and Neotropical regions. It must be noted that all of these species breed only in grass flowers (Mound et al. 1976; Mound and Kibby 1998). Larvae of all species of the genus Chirothrips develop only within the florets of flowering grasses (Watts 1966). Most important species of this genus are ; C. hamatus Trybom, C. molestus Priesner, C. aculeatus Bagnall, C. rupitepennis Prisner, C. africanus Priesner, C. atricorpus Girault, C. meridionalis Bagnall, C. pallidicornis Priesner, C. pretorianus Hood, C. kurdistanus zur Strassen, C. similis Priesner, C. ammophilae Bagnall, C. bagnalli Hood, C. spinulosus Andre and C. manicatus Haliday. All these species were recorded on different host plants belonging especially to the Poaceae Family (Goldarazena 1996; Lacasa and Llorens 1996; Mound et al. 1976; Minae and Mound 2010)

C. manicatus is the most common species in this genus and is now found in most temperate countries in pasture grasses (Mound and Kibby 1998). Moreover, it is considered as a species-group. This group includes some of the most common grass thrips of Europe and Western Asia (Minae and Mound 2010). C. manicatus is a European thrips species that has been distributed widely in temperate areas around the world, presumably because each pupa remains within the floret of a grass and these pupae are then distributed in grass seeds (Mound and Kibby 1998; Bhatti et al. 2009; Anonymous 2012). This species is reported in Many European countries such as Spain (Goldarazena 1996), Poland (zur Strassen 2003), Bulgaria (Karadjova and Krumov 2015), Italy (Marullo and De Grazia 2013), Coatia (Raspudic et al. 2009), England (Mound et al. 1976). It has been found also in Australia (Minae et Mound 2010), New Zealand (Mound and Walker 1982), Japan (Masumoto 2010) Iran (Minae and Mound 2010) and the USA in Florida (Watson 1926).

This species is widely reported as a pest of grasses, particularly when these are grown for seed production. In New Zealand, this species was reported to destroy 30% of cocksfoot seed (Dactylis glomerata) and later reported as the most common primary pest of brome grass (Bromus sp.) In Oregon, U.S.A., infestation of Bent Grass (Agrostis sp.) by C. manicatus was estimated at 32%. Moreover, some populations of this species in Japan were found to reduce the rate of seed set in the common reed, Phragmites australis, with up to 10% of florets destroyed (Minae and Mound 2010). On the other hand, Anonymous (2012) indicated that C. manicatus does not transmit viruses.

Thrips were collected by beating and sampling of leaves and flowers of vine, barely, citrus and weeds found in all locations. All found specimens were placed in alcohol and then identified according to the identification keys of Mound et al. (1976), Mound and Walker (1982), Lacasa and Llorens (1996), Mound and Kibby (1998) and Minae and Mound (2010).

C. manicatus was found in both locations. All identified specimens were females and no males were noted. It was found on Vitis vinifera, Hordeum murinum and Bromus diandrus in the region of Grombalia and on Citrus, H. vulgare and H. murinum in the region of Mograne (Table 1).

The identification of adults was carried on the basis of the adults’ morphology. According to Mound et al. (1976), Mound and Walker (1982), Lacasa and Llorens (1996), Mound and Kibby (1998) and Minae and Mound (2010). Females are macropterous with a brown body colour (Figure 2) while males are apterous or micropterous and smaller than females. Head weakly produced in front of eyes (Figure 3) and much smaller than thorax with a pronotum trapezoidal (Figure 4) with two pairs of major posteroangular setae. Antennae short, 8-sgmented; segment II asymitrical with external margin prolonged, its external margin drawn out into a point (Figure 5). Segments III and IV each with a stout, simple sense cone. Forewings slender, pointed; first vein with a group of setae basally and 1 to 2 near apex, second vein with 3 to 6 spaced setae. Tergites with transverse lines of sculpturing, posterior margin with a complete scalloped craspedum.

Chirothrips manicatus known as a thrips species that occurs generally on Poaceae is encountered in Tunisia in two different locations and on five host plants which are barley (Hordeum vulgare), wall barely (Hordeum murinum), the great brome (Bromus diandrus), vine (Vitis vinifera) and citrus (Citrus sp.). This thrips species must be monitored in the reason to know if it may cause damages on different host plants in Tunisia.

Watson TR (1926) Ecological and Geographical Distribution of Thysanoptera of Florida. The Florida Entomologist 10 (2) : 21-24.