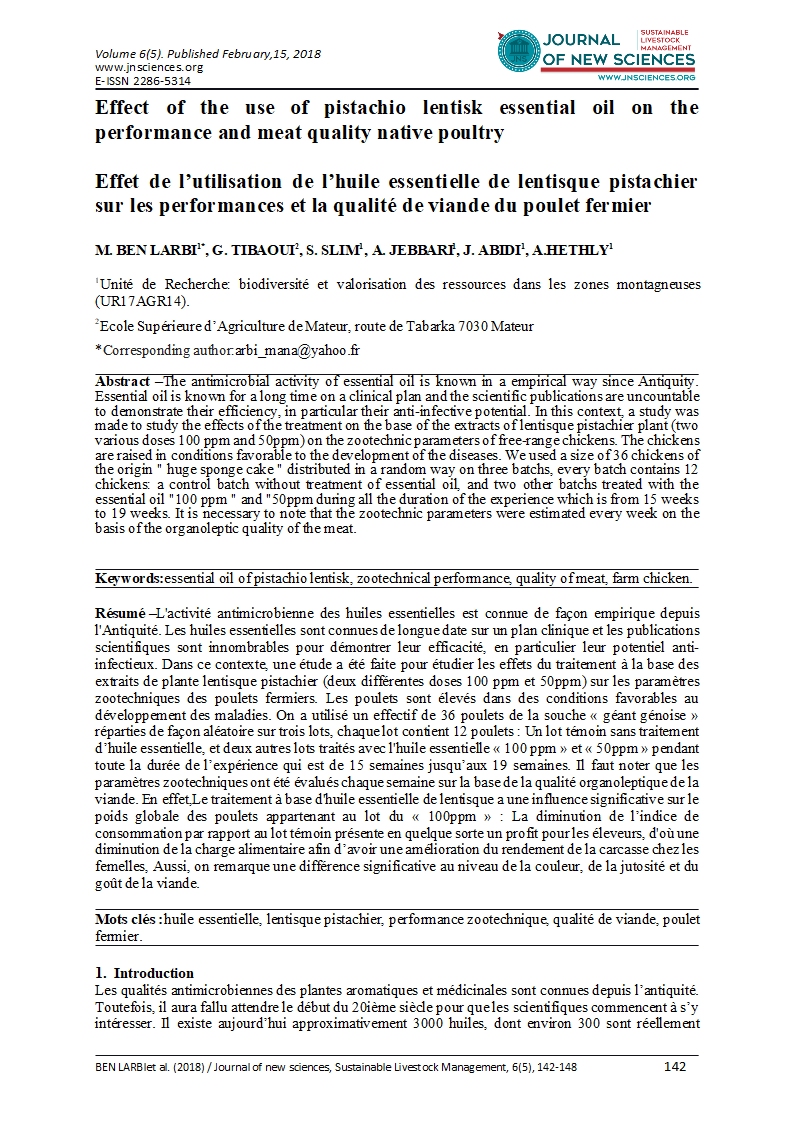 Abstract –The antimicrobial activity of essential oil is known in a empirical way since Antiquity. Essential oil is known for a long time on a clinical plan and the scientific publications are uncountable to demonstrate their efficiency, in particular their anti-infective potential. In this context, a study was made to study the effects of the treatment on the base of the extracts of lentisque pistachier plant (two various doses 100 ppm and 50ppm) on the zootechnic parameters of free-range chickens. The chickens are raised in conditions favorable to the development of the diseases. We used a size of 36 chickens of the origin " huge sponge cake " distributed in a random way on three batchs, every batch contains 12 chickens: a control batch without treatment of essential oil, and two other batchs treated with the essential oil "100 ppm " and "50ppm during all the duration of the experience which is from 15 weeks to 19 weeks. It is necessary to note that the zootechnic parameters were estimated every week on the basis of the organoleptic quality of the meat. 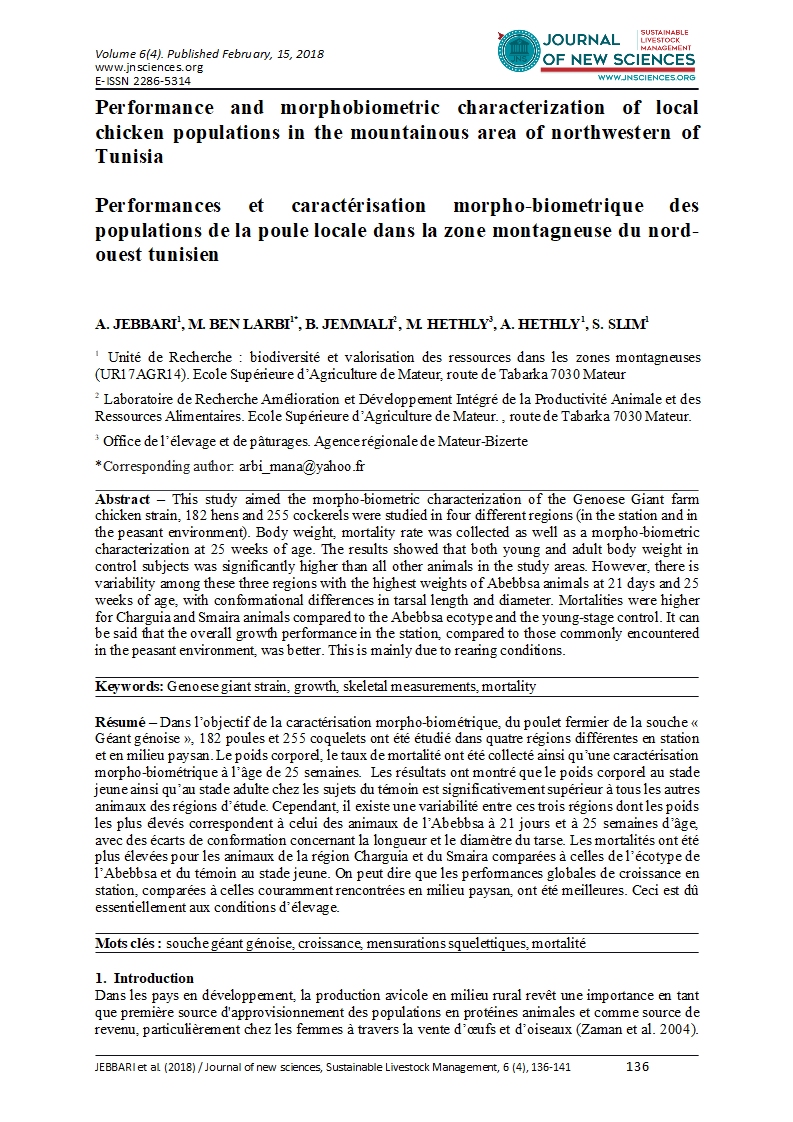 Abstract – This study aimed the morpho-biometric characterization of the Genoese Giant farm chicken strain, 182 hens and 255 cockerels were studied in four different regions (in the station and in the peasant environment). Body weight, mortality rate was collected as well as a morpho-biometric characterization at 25 weeks of age. The results showed that both young and adult body weight in control subjects was significantly higher than all other animals in the study areas. However, there is variability among these three regions with the highest weights of Abebbsa animals at 21 days and 25 weeks of age, with conformational differences in tarsal length and diameter. Mortalities were higher for Charguia and Smaira animals compared to the Abebbsa ecotype and the young-stage control. It can be said that the overall growth performance in the station, compared to those commonly encountered in the peasant environment, was better. This is mainly due to rearing conditions. 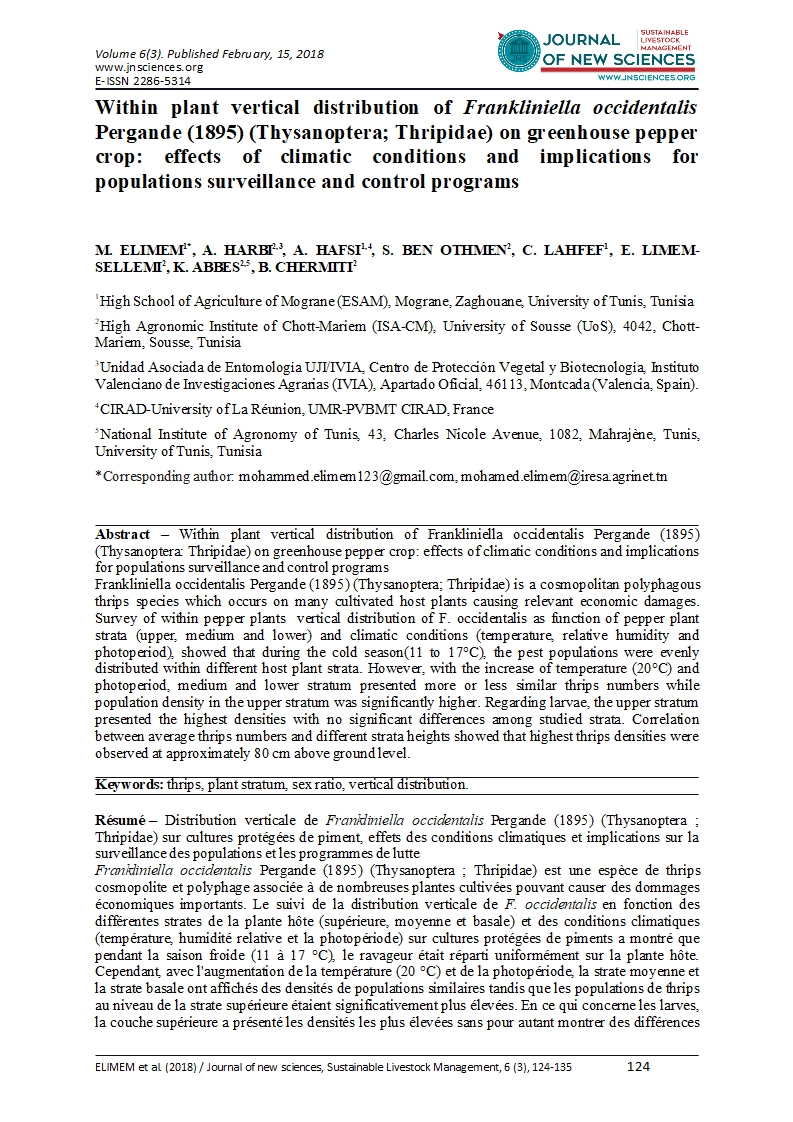 Abstract – Within plant vertical distribution of Frankliniella occidentalis Pergande (1895) (Thysanoptera: Thripidae) on greenhouse pepper crop: effects of climatic conditions and implications for populations surveillance and control programs. Frankliniella occidentalis Pergande (1895) (Thysanoptera; Thripidae) is a cosmopolitan polyphagous thrips species which occurs on many cultivated host plants causing relevant economic damages. Survey of within pepper plants vertical distribution of F. occidentalis as function of pepper plant strata (upper, medium and lower) and climatic conditions (temperature, relative humidity and photoperiod), showed that during the cold season(11 to 17°C), the pest populations were evenly distributed within different host plant strata. However, with the increase of temperature (20°C) and photoperiod, medium and lower stratum presented more or less similar thrips numbers while population density in the upper stratum was significantly higher. Regarding larvae, the upper stratum presented the highest densities with no significant differences among studied strata. Correlation between average thrips numbers and different strata heights showed that highest thrips densities were observed at approximately 80 cm above ground level. 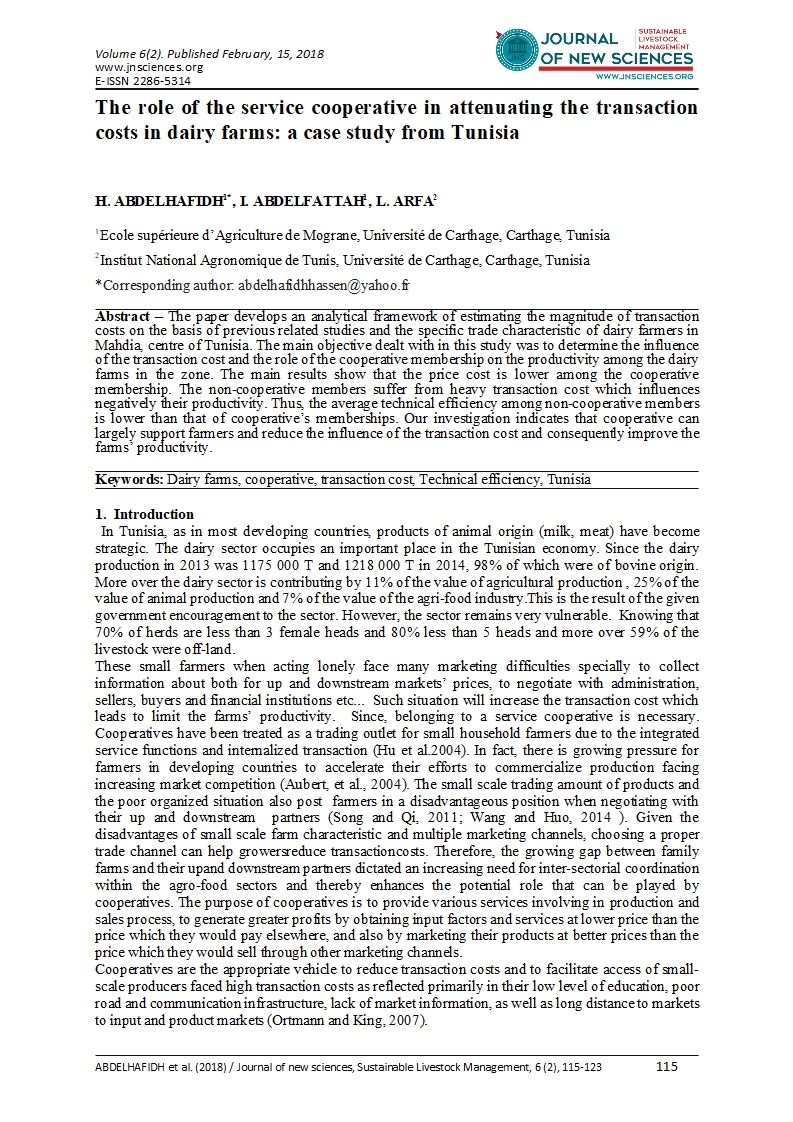 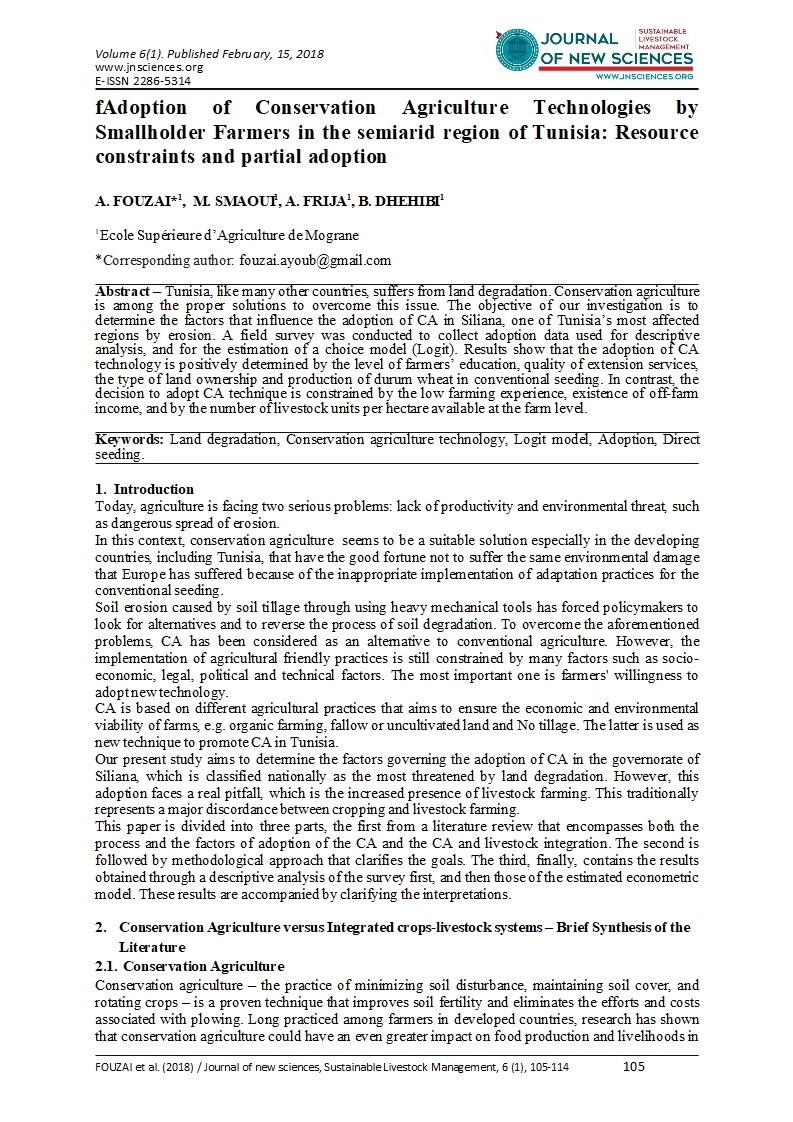 Abstract – Tunisia, like many other countries, suffers from land degradation. Conservation agriculture is among the proper solutions to overcome this issue. The objective of our investigation is to determine the factors that influence the adoption of CA in Siliana, one of Tunisia’s most affected regions by erosion. A field survey was conducted to collect adoption data used for descriptive analysis, and for the estimation of a choice model (Logit). Results show that the adoption of CA technology is positively determined by the level of farmers’ education, quality of extension services, the type of land ownership and production of durum wheat in conventional seeding. In contrast, the decision to adopt CA technique is constrained by the low farming experience, existence of off-farm income, and by the number of livestock units per hectare available at the farm level.