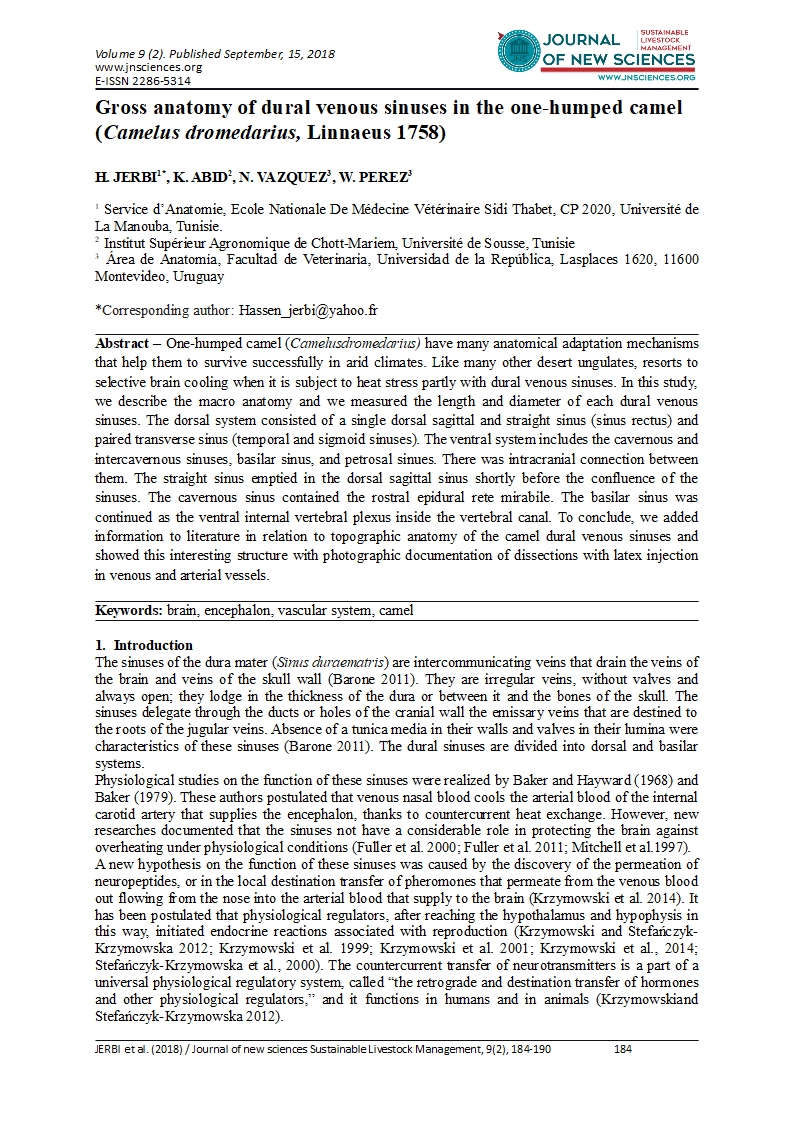 Abstract – One-humped camel (Camelusdromedarius) have many anatomical adaptation mechanisms that help them to survive successfully in arid climates. Like many other desert ungulates, resorts to selective brain cooling when it is subject to heat stress partly with dural venous sinuses. In this study, we describe the macro anatomy and we measured the length and diameter of each dural venous sinuses. The dorsal system consisted of a single dorsal sagittal and straight sinus (sinus rectus) and paired transverse sinus (temporal and sigmoid sinuses). The ventral system includes the cavernous and intercavernous sinuses, basilar sinus, and petrosal sinues. There was intracranial connection between them. The straight sinus emptied in the dorsal sagittal sinus shortly before the confluence of the sinuses. The cavernous sinus contained the rostral epidural rete mirabile. The basilar sinus was continued as the ventral internal vertebral plexus inside the vertebral canal. To conclude, we added information to literature in relation to topographic anatomy of the camel dural venous sinuses and showed this interesting structure with photographic documentation of dissections with latex injection in venous and arterial vessels.

The sinuses of the dura mater (Sinus duraematris) are intercommunicating veins that drain the veins of the brain and veins of the skull wall (Barone 2011). They are irregular veins, without valves and always open; they lodge in the thickness of the dura or between it and the bones of the skull. The sinuses delegate through the ducts or holes of the cranial wall the emissary veins that are destined to the roots of the jugular veins. Absence of a tunica media in their walls and valves in their lumina were characteristics of these sinuses (Barone 2011). The dural sinuses are divided into dorsal and basilar systems.

Physiological studies on the function of these sinuses were realized by Baker and Hayward (1968) and Baker (1979). These authors postulated that venous nasal blood cools the arterial blood of the internal carotid artery that supplies the encephalon, thanks to countercurrent heat exchange. However, new researches documented that the sinuses not have a considerable role in protecting the brain against overheating under physiological conditions (Fuller et al. 2000; Fuller et al. 2011; Mitchell et al.1997).

Several studies were conducted on the structure and function of the dural venous sinuses in different animal species, including camelids (Baker 1979; Barone 2011; El-Hagriet al.1977; Smuts et al. 1987; Zguigalet al. 1991). The aim of this study was to describe gross anatomy of the dorsal dural venous sinuses in Dromedary and their extracranial connections with veins of head and neck. This would allow a better comprehension of their role on the selective brain cooling during heat stress that allows it to survive in harsh areas of the world, a fact mentioned in multiple studies (Bengoumi 2002; Elkhawad 1992; Elkhawad et al. 1990; Gebreyohaneset al. 2017; Soliman 2015).

This study involved the use of seven camel heads (4 males and 3 females) aged between 1 and 1.5 years. The specimens were slaughtered and handled in accordance with the local ethical board guidelines of école nationale de médecine vétérinaire Sidi Thabet of Tunisia. Each head was isolated immediately after slaughter by a section between the second and third cervical vertebrae.

A first group of five heads was used to perform plan-by-plan classical progressive dissections and sagittal sections, that allowed the extraction of the encephalon within its connections to the dural venous sinuses. The head and the cranial extremity of the neck were injected with a 10 % formalin solution via cannulas placed in the right and left common carotid arteries and external jugular veins. Fixation takes 12 to 24 hours, and then, demineralized water was introduced through the same cannulas to wash the formalin salts. Between 60 and 100 ml of very diluted and red-colored latex neoprene was injected immediately after rinsing with demineralized water in both common carotid arteries. The injection of latex was conducted progressively with hand pressure, using 60 ml syringes, until the coloration of the little arterioles in the conjunctiva was visible. A very-diluted solution of blue colored latex neoprene was also manually injected in the venous system through cannulas placed in each external jugular vein. Cannulas were systematically placed in a way to bypass the venous valves system of the external jugular vein, commonly located next to the first cervical vertebrae, in order to achieve a satisfactory filling. We used near 400 ml of latex neoprene for each head, and the injection was systematically stopped at the appearance of resistance. Heads were then maintained at +4 °C during 24 hours, until the solidification of the injected latex was suitable. A dissection was conducted progressively, following precise muscular incisions and bone sections, to extract the encephalon still linked to its dorsal and ventral dural venous sinuses and the rostral epidural rete mirabile.

In order to identify the organization of the dural venous sinuses network and to measure its dimensions, a second group composed of two heads, with no previous injection for conservation was used. The external jugular veins were carefully dissected and cannulated followed by manual injection of blue methyl methacrylate. The heads were stored at 4°C for 24 hours to allow polymerization of the injected resin. Maceration was performed with pepsin hydrochloric acid and amylase/protease solution at 50°C until all soft tissues were dissolved. Pictures were taken with a Nikon digital camera. Terms are used in agreement with the Nomina Anatomica Veterinaria (ICVGAN 2017).

The veins of the brain were generally divided into 4 groups: dural venous sinus, diploic veins, emissary veins and cerebral veins.

The dorsal sagittal sinus (Sinus sagittalis dorsalis) (Fig.1) was the longest dural sinus with 12.0 cm in length and 0.5 cm in width. In cross section, it had a shape of a triangle with the base oriented dorsally. At the rostro-dorsal surface of the brain, this sinus was thin and single. It ran caudo-dorsally along the median plane and was bifurcated forming a rich plexus between the cerebellum and the cerebrum. It received the diploic veins, five to six dorsal cerebral veins and, near the caudal extremity, the straight sinus.

The transverse sinus (Sinus transversus) (Fig.1) was paired and located inside the membraneous tentorium of the cerebellum. This sinus continued to directe to the dorsal sagittal sinus and occasionally receives a few branches of the straight sinus. It passed through the occipital bone and lodges in a specific transverse groove. Each sinus, in its intraosseous course, was composed of 3 to 4 veins and formed a pampiniform plexus. It was about 2-3 cm in length. It ends up dividing into temporal and sigmoid sinuses. The temporal sinus (Sinus temporalis) (Fig.1) was larger than sigmoid sinus. With a circular section, it measured 7 cm in length and 1 cm in diameter. Near to the temporal canal usually it received the caudal deep temporal vein and it passed through this canal. It emerged as the emissary vein of the retroarticular foramen and joined to the maxillary vein and pterygoid plexus. The sigmoid sinus (Sinus sigmoideus) (Fig.1) was the caudal branch of the division of the transverse sinus. It was S shaped and had about 5 cm in length and 0.2 cm in diameter. It joined the emissary vein of the condylar foramen to finally empty in the occipital vein and basilar sinus.

The straight sinus (Sinus rectus) (Fig.2) was brief and often triangular in cross section. It had about 4-5 cm in length and 0.5-1 cm in diameter. This sinus was formed at the level of the splenium of corpus callosum by the confluence of the great cerebral veins ventrally and the vein of the corpus callosum and ventral sagittal sinus dorsally. The straight sinus ascended along the median plane between the two cerebral hemispheres and usually emptied directly in the dorsal sagittal venous sinus (5 cases). Sometimes it drained into the confluence of sinus, or in the transverse sinus (2 cases).

The cavernous sinus (Sinus cavernosus) (Fig.3) was H shaped and was composed of two lobes. With a plexiform aspect, it was surrounding the rostral epidural rete mirabile and the internal carotid artery. It was located on both sides of the hypophysis cerebri on the basisphenoid bone and related to the piriform lobe and the pons of the encephalon. Each lobe measures 6 cm in length and 3 cm in width and were transversally connected via very fine rostral intercavernous sinus and a well-developed caudal intercavernous sinus. Each sinus communicated rostrally with the ophthalmic plexus and caudally with the basilar plexus and the ventral petrosal sinus.

The basilar sinus (Sinus basilaris) (Fig.3) was a voluminous mass with a spongy aspect occupying the basilar part of the occipital bone. It was composed of two lobes connected ventrally by the well-developed ventral interbasilar sinus; however, the dorsal interbasilar sinus was vestigial. It was extended transversely with its counterpart of the opposite side occupying the foramen magnum. It continued caudally and ventrally as the ventral internal vertebral plexus. The basilar sinus was released to the occipital vein by the emissary vein of the hypoglossal canal and dorso-laterally, it received the sigmoid sinus and the condylar and diploic veins.

The petrosal sinus (Sinus petrosus) (Fig.3) had two parts, dorsal and ventral. The dorsal was the rostral extension of the transverse sinus. It had 8 cm in length and 0.5 cm in wide. It was located opposite to the lateral aspect of the pyramid. It was connected to the cavernous sinus and the caudal intercavernous sinus. Several veins drained this sinus such the ventral cerebral vein and the meningeal veins. However, the ventral petrosal sinus was located between basilar and cavernous sinuses. It was very thin and attached to the basilar part of the occipital bone. It was enclosed in thick dura mater. It had 2 cm of length and 0.5 cm in wide.

According to our knowledge, this is an anatomical description of dural sinuses of the dromedary camel with excellent photographic documentation and measures of sinuses, which facilitates a comparison with other descriptions from the literature.

In most animals and especially in the camel, there are intracranial connections between the dorsal and ventral systems of the dural venous sinus, however, in the horse this anastomosis is absent (Zguigal et al. 1991). The dorsal sagittal sinus of the camel, like the horse and unlike ox and dog, is amply divided by a septum or fibrous bands and bifurcates rostral to the tentruim (Barone 2011; Smuts et al. 1987). Moustafa et al. (1981), reported the presence of a ventral sagittal sinus in the camel, this observation is confirmed in our dissections while Zguigal et al. (1991) they could not identify this structure.

Large tributaries of the confluence sinus and the dorsal petrosal sinus connected the transverse sinus to the cavernous sinus and the rostral and caudal intercavernous sinus, this connection is present in cows and sheep and absent in pigs (Ghoshal et al. 1986; Hoffmann et al. 2014). Jerbi et al. (2016) reported that the cavernous sinus contained the rostral epidural rete mirabile in the camel, as in ruminants and pig, and the venous plexuses were intermingled with carotid rete branches.

In all species, including the camel, except the horse, the dorsal petrosal sinus was loged within the membranous cerebellar tentorium (Barone 2011; Smuts et al. 1987; Zguigalet al. 1991). The ventral petrosal sinus is especially plexiform in camel like in cows, it lay ventral to the cavernous sinus.

In future research is necessary understand the physiological importance of these structures, especially in the diffusion of pheromones, hormones and neurotransmitters, topics never explored in these species.

The authors would like to appreciate Doctor Caroline Larrouilh (http://www.proudhorseconnections.com/) for this interest and his help in the study.

Baker MA, Hayward JN (1968) The influence of the nasal mucosa and the carotid rete upon hypothalamic temperature in sheep. J Physiol 198: 561-579.

Krzymowski T, Grzegorzewski W, Stefańczyk-Krzymowska S, Skipor J, Wąsowska B (1999) Humoralpathway for transfer of the boar pheromone, androstenol, from the nasal mucosa to the brain and hypophysis of gilts. Theriogenology 52: 1225-1240.