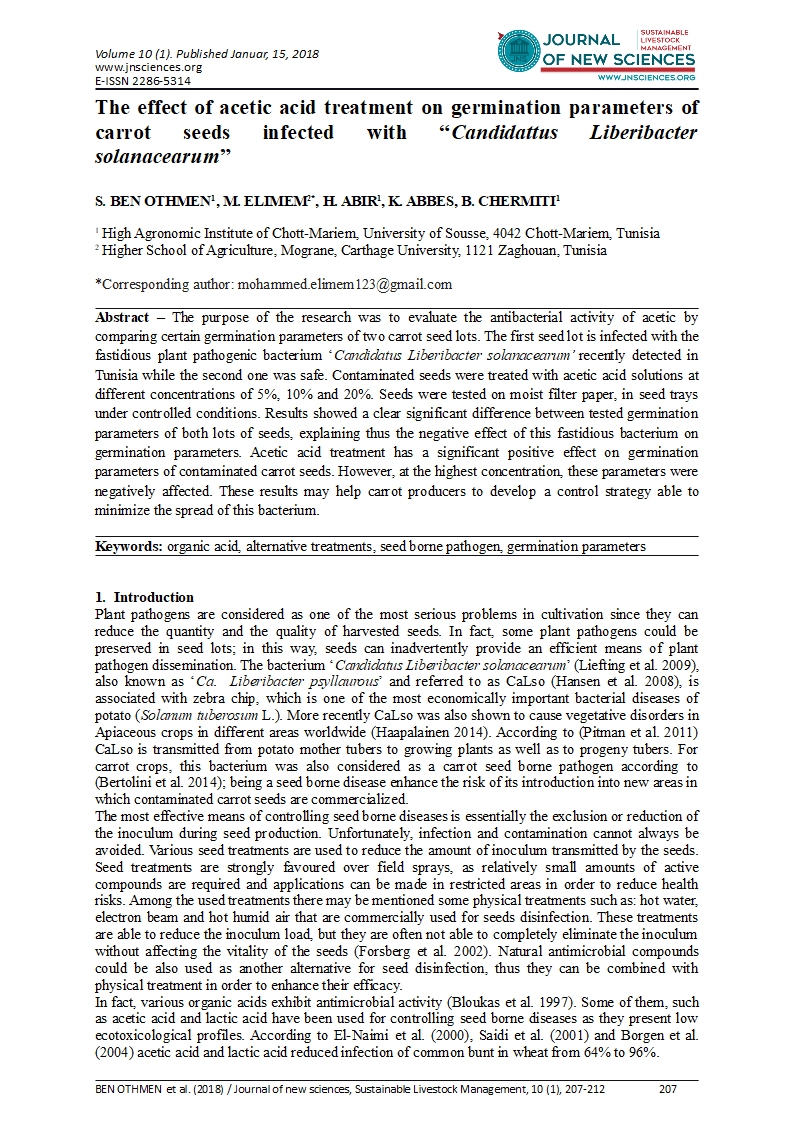 Abstract – The purpose of the research was to evaluate the antibacterial activity of acetic by comparing certain germination parameters of two carrot seed lots. The first seed lot is infected with the fastidious plant pathogenic bacterium ‘Candidatus Liberibacter solanacearum’ recently detected in Tunisia while the second one was safe. Contaminated seeds were treated with acetic acid solutions at different concentrations of 5%, 10% and 20%. Seeds were tested on moist filter paper, in seed trays under controlled conditions. Results showed a clear significant difference between tested germination parameters of both lots of seeds, explaining thus the negative effect of this fastidious bacterium on germination parameters. Acetic acid treatment has a significant positive effect on germination parameters of contaminated carrot seeds. However, at the highest concentration, these parameters were negatively affected. These results may help carrot producers to develop a control strategy able to minimize the spread of this bacterium.

Plant pathogens are considered as one of the most serious problems in cultivation since they can reduce the quantity and the quality of harvested seeds. In fact, some plant pathogens could be preserved in seed lots; in this way, seeds can inadvertently provide an efficient means of plant pathogen dissemination. The bacterium ‘Candidatus Liberibacter solanacearum’ (Liefting et al. 2009), also known as ‘Ca. Liberibacter psyllaurous’ and referred to as CaLso (Hansen et al. 2008), is associated with zebra chip, which is one of the most economically important bacterial diseases of potato (Solanum tuberosum L.). More recently CaLso was also shown to cause vegetative disorders in Apiaceous crops in different areas worldwide (Haapalainen 2014). According to (Pitman et al. 2011) CaLso is transmitted from potato mother tubers to growing plants as well as to progeny tubers. For carrot crops, this bacterium was also considered as a carrot seed borne pathogen according to (Bertolini et al. 2014); being a seed borne disease enhance the risk of its introduction into new areas in which contaminated carrot seeds are commercialized.

The most effective means of controlling seed borne diseases is essentially the exclusion or reduction of the inoculum during seed production. Unfortunately, infection and contamination cannot always be avoided. Various seed treatments are used to reduce the amount of inoculum transmitted by the seeds. Seed treatments are strongly favoured over field sprays, as relatively small amounts of active compounds are required and applications can be made in restricted areas in order to reduce health risks. Among the used treatments there may be mentioned some physical treatments such as: hot water, electron beam and hot humid air that are commercially used for seeds disinfection. These treatments are able to reduce the inoculum load, but they are often not able to completely eliminate the inoculum without affecting the vitality of the seeds (Forsberg et al. 2002). Natural antimicrobial compounds could be also used as another alternative for seed disinfection, thus they can be combined with physical treatment in order to enhance their efficacy.

Since seed health has a particular importance and seeds are considered as a potential vehicle for transmitting beneficial or deleterious bacteria, this paper focuses on the study of the effect of CaLso on some germination parameters for carrot seeds, especially the germination test as it is considered as the most important quality in evaluating the planting value of seed lot. The effect of acetic acid at different concentration was also studied in order to determine the suitable concentration for reducing the effect of CaLso and preserving seed viability.

Seed samples of the cultivar “Arbi Zaafrana” were obtained from carrot seeds production area (Zaafrana, Kairouan, Tunisia), during two consecutive years 2015 and 2016. In 2015, three lots of seeds (SE1, SE2 and SE3) were analyzed for CaLsol presence and they tested negative (Ben Othmen et al. 2018). In 2016, seed samples (SE4, SE5 and SE6) were proved to be highly contaminated with a viability of CaLso cells ranging from 36% to 65% (Ben Othmen et al. 2018).

The effect of seed treatment with acetic acid on CaLso on carrot seeds was assessed. Contaminated seed samples of 2016 were treated with acetic acid solutions at concentrations of 5%, 10% and 20%. For each treatment seeds were soaked in each solution for ten minutes then, they were placed in a sieve and excess compound was removed with sterilized distilled water. Thus, they were placed in plates to dry overnight at room temperature.

Viable seeds with uniform size were selected and used for germination test. Three replicates of 50 seeds from each treatment (150 seeds) were placed in labeled Petri dishes containing two layers of moistened blotters and incubated at 28°C, in darkness. The total number of germinated seeds (Gmax) was determined on the basis of the number of seeds with visible radical (≥ 2 mm) counted daily for 10 days. Seeds were considered germinated when there was a visible coleoptiles protrusion through the testa. The following germination parameters were recorded:

(Where f=Seeds germinated on day x)

Coefficient of Velocity of Germination

(GI) was calculated as described in the Association of Official Seed Analysts (AOSA, 1983) by following formula:

In present experiment the negative effect of the fastidious bacterium “Ca. Liberibacter solanacearum” on carrot seed germination rate was very clear. In fact, the germination rate recorded for the safe carrot seeds was significantly higher compared to the recorded one for contaminated seeds (Figure 1).

Because of the presence of CaLso, this rate decrease significantly from 89.33% to 59.33% (P<0.05) for the contaminated carrot seeds (Table 1). Moreover, it can be postulated that this bacterium decreased the total number of germinating seeds and consequently the germination capacity. On the 3rd day after seeding we recorded a higher germination rate for the safe seeds (70.66%) while on the 6th day the highest germination rate was recorded for the CaLsol positive carrot seeds (40.66%). According to this result we can assume that the germination process was slowed down by the presence of bacterium which could explain the higher rate recorded on the 6th day for the contaminated carrot seeds.

Furthermore, the association of this bacterium to carrot seeds significantly decrease the germination index parameter (P<0.005). The mean germination time (MGT) was also significantly affected, by the association of CaLso 1 (P<0.05) (Table 1); however contaminated seeds required more time for germinating. Impairing of this parameters greatly explain that bacteria may damage or even destroy the essential seedling structures (Andersen et al. 1955; McGee 1979). The present result is in agreement with the study of (Islam 2005). In addition, it has been reported that bacteria reduce significantly the germination percentage of seeds (Jamadar et al. 2001; Gupta et al. 1989).

The effect of different concentrations of acetic acid was studied on germination parameters of ‘CaLsol’ positive carrots seeds, since organic acids are known for their antibacterial and antifungal properties and especially that they were widely used in agriculture (De Muynck et al. 2004; Laitila et al. 2002; Lavermicocca et al. 2003; Pao et al. 2008; Sathe et al. 2007; Scholberg and Gaunce 1995; 1996, Tripathi and Dubey 2004). Furthermore, acetic acid is considered as a soft natural substance having the minimum toxicity risk for humans and animals (Borgen 2001) and it was usually used to reduce seed-associated micro-organisms.

Results of the seed treatments indicate that acetic acid has antimicrobial properties and it is able to reduce the life cells of associated bacteria which may explain the enhancement of the germination rate compared to control treatment. Indeed, Sholberg and Gaunce (1995) mentioned that low concentration of acetic acid vapour were extremely effective for the control of Botrytis cinerea conidia on apple fruit. Furthermore, (Borgen and Kristenson 2001) noted the positive effect of acetic acid for the control of common bunt (Tilletia tritici) in wheat. In addition, this treatment was also efficient for the control of Alternaria dauci in carrot (Lizot et al. 2002). The broad-spectrum antimicrobial activity of acetic acid has been also demonstrated by Lang et al (2000) as they found that acetic and lactic acid combined with hypochlorite may eliminate Escherichia coli O157:H7 from alfalfa seeds prior sprouting. In fact, Pao et al. (2008) achieved elimination of Salmonella enterica in alfalfa and mung bean sprouts after 4 and 16 hours immersing in 5% acetic acid. Further studies realized on cabbage seed-associated bacteria demonstrated that disinfection with lactic acid at 0.5% resulted in the reduction of the bacterial count by more than 99% at concentrations of 2.5 % (Van der Wolf et al. 2008). Besides, a high concentration (≥ 2%) of organic acids, (acetic acid, propionic acid, ascorbic acid and lactic acid) is required for a high antibacterial effect in the seed treatments (Van der Wolf et al. 2008).

Andersen A M. (1955) The effect of certain fungi and gibberel1 in on the germination of Merion Kentucky bluegrass seed. Proc. Assoc. Off. Analysts 45:145-153.