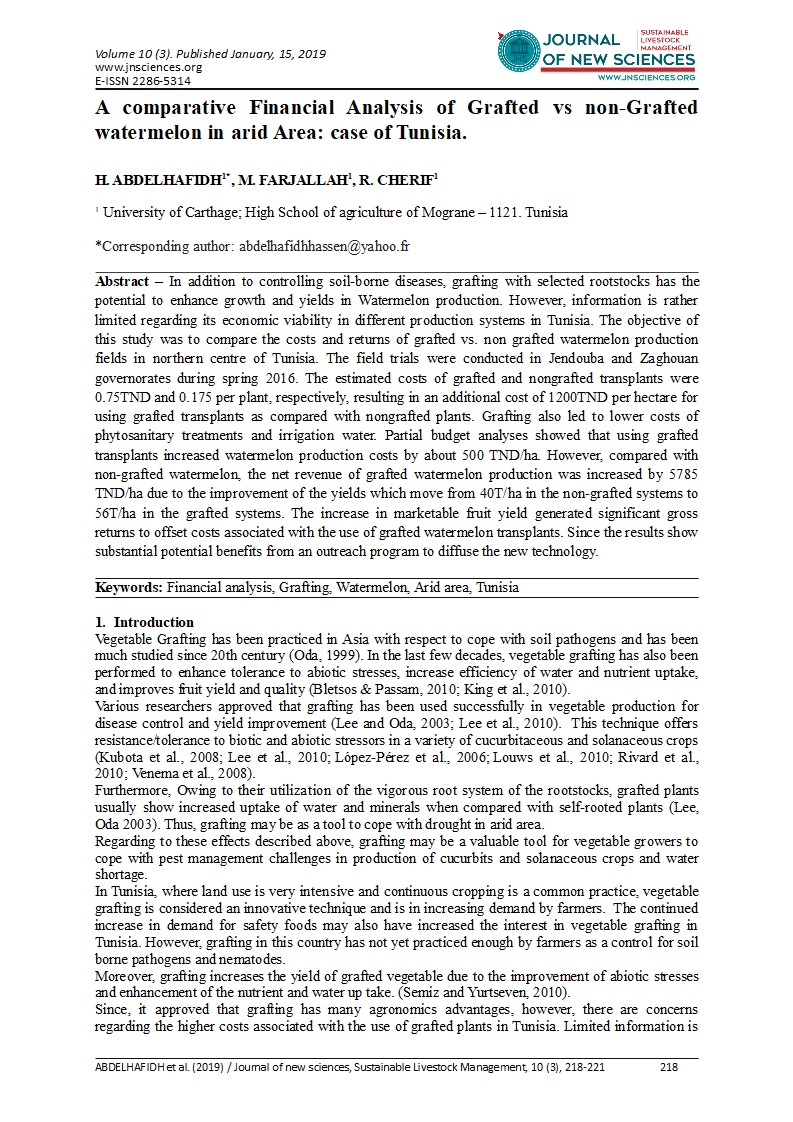 1 University of Carthage; High School of agriculture of Mograne – 1121. Tunisia

Abstract – In addition to controlling soil-borne diseases, grafting with selected rootstocks has the potential to enhance growth and yields in Watermelon production. However, information is rather limited regarding its economic viability in different production systems in Tunisia. The objective of this study was to compare the costs and returns of grafted vs. non grafted watermelon production fields in northern centre of Tunisia. The field trials were conducted in Jendouba and Zaghouan governorates during spring 2016. The estimated costs of grafted and nongrafted transplants were 0.75TND and 0.175 per plant, respectively, resulting in an additional cost of 1200TND per hectare for using grafted transplants as compared with nongrafted plants. Grafting also led to lower costs of phytosanitary treatments and irrigation water. Partial budget analyses showed that using grafted transplants increased watermelon production costs by about 500 TND/ha. However, compared with non-grafted watermelon, the net revenue of grafted watermelon production was increased by 5785 TND/ha due to the improvement of the yields which move from 40T/ha in the non-grafted systems to 56T/ha in the grafted systems. The increase in marketable fruit yield generated significant gross returns to offset costs associated with the use of grafted watermelon transplants. Since the results show substantial potential benefits from an outreach program to diffuse the new technology.

Vegetable Grafting has been practiced in Asia with respect to cope with soil pathogens and has been much studied since 20th century (Oda, 1999). In the last few decades, vegetable grafting has also been performed to enhance tolerance to abiotic stresses, increase efficiency of water and nutrient uptake, and improves fruit yield and quality (Bletsos & Passam, 2010; King et al., 2010). Various researchers approved that grafting has been used successfully in vegetable production for disease control and yield improvement (Lee and Oda, 2003; Lee et al., 2010). This technique offers resistance/tolerance to biotic and abiotic stressors in a variety of cucurbitaceous and solanaceous crops (Kubota et al., 2008; Lee et al., 2010; López-Pérez et al., 2006; Louws et al., 2010; Rivard et al., 2010; Venema et al., 2008). Furthermore, Owing to their utiliza­tion of the vigorous root system of the rootstocks, grafted plants usually show increased uptake of wa­ter and minerals when compared with self-rooted plants (Lee, Oda 2003). Thus, grafting may be as a tool to cope with drought in arid area. Regarding to these effects described above, grafting may be a valuable tool for vegetable growers to cope with pest management challenges in production of cucurbits and solanaceous crops and water shortage.

In Tunisia, where land use is very inten­sive and continuous cropping is a common prac­tice, vegetable grafting is considered an innovative technique and is in increasing demand by farmers. The continued increase in demand for safety foods may also have increased the interest in vegetable grafting in Tunisia. However, grafting in this country has not yet practiced enough by farmers as a control for soil borne pathogens and nematodes. Moreover, grafting increases the yield of grafted vegetable due to the improvement of abiotic stresses and enhancement of the nutrient and water up take. (Semiz and Yurtseven, 2010).Since, it approved that grafting has many agronomics advantages, however, there are concerns regarding the higher costs associated with the use of grafted plants in Tunisia. Limited information is available as to whether grafting can be used economically in open field production. Considering the multifaceted benefits of vegetable grafting, a comprehensive approach involving production efficiencyThe use of grafted watermelon as a technique to prevent losses due to diseases is widespread throughout the world but other positive aspects may be equally important to the producer/decision maker regarding the potential to harvest watermelons during a market window where high prices exist that were previously unreachable (Ioannou et al., 2000).

However, to our knowledge, there have been few studies examining both the cost of grafted watermelon systems and their expected return. This information could help growers decide if the extra cost of grafted transplants could be justified by increased output or by the reduction of production inputs when using grafting to overcome soil-borne diseases and drought. growers and transplant producers interested in vegetable grafting need information based on local production systems.

Watermelon is economically one of the most important vegetable crops in Tunisia, covering approximately 28000 ha representing 15% of the vegetable area with a production of 541000 tons (FAO,2016). This importance results from the strong demand by the consumer and from the good economic profitability of these crops compared to other speculations. In fact, it ranks second in surface among vegetable crops. In addition, that it’s much appreciated as an excellent refreshing summer fruit, watermelon contains vitamin A, C, E, potassium, citrulline, argentine and a variety of natural antioxidants suggesting protective roles in reducing the risk of certain types of cancers and cardiovascular diseases (Giovannucci 1999; Rao 2006). Despite these facts this sector is stagnating in terms of the performances achieved: caused mainly by the low efficiency of farmers and low innovative production practices.

The data used in the current study is about the production structure of 57 farms over two geographic regions with different climatic conditions, heterogeneity is likely to characterize the sample (different farm sizes, uneven management skills, etc.). Farm-level data are obtained by interviewing farmers that produce watermelon crops. The sample was compounded by 32 farms located at the province of Jendouba in the sub humid bioclimatic stage with annual precipitation of 800 mm and 25 farms located in the province of Nadhour in the higher semi arid bioclimatic stage with an annual precipitation of 450mm.

The survey was carried out in 2017 by interviewing farmers face to face using questioner prior elaborated. Through this questioner we trend to characterize the faming system and to gather technical and economical data regarding the watermelon activity experienced during the previous crop year 2016. Fields ranged in size from 1 to 5 ha with an average area of 2.4 ha. The area cultivated by the grafted plants is 106 against 40 ha by non grafted plants.

The purpose of this study is to compare the production costs between open field watermelon production systems using non-grafted versus grafted plants to determinate the shift of cost and gains generated by adopting grafted plants. The use of grafted transplants results in an increase in plants costs early in the production season as grafted transplants are typically more expensive compared with non grafted plants. However, Other non transplant production costs as well as yields could also be affected. A comparative approach was used to identify any cost or revenue-related items that could be affected by grafting technology adoption and is proposed here as a tool to facilitate grafting technology adoption decisions.

The use of grafted watermelon plants needs an average density of 2600 plants/ha. The cost is 0.75 TND per unit which equals a cost of 1950 TND per hectare. However, the non-grafted plants cost is approximately 0.175 TND per unit, which is equivalent to a per hectare cost of 753 TND for an average density of 4300 plants/ha. Since the shift of the plants’ purchase cost is about 159% which is pursued heavy for watermelon growers. This increase of the purchase cost may not encourage them to grow grafted plants. Since, they need more information about grafting economic benefits..

Results presented in table1 show, that the use of crafted plants reduces significantly many others items of the production cost. First grafting led to an important decrease of the per hectare irrigation water consumption which moves from 7025 to 4038m3/ha indicating a shift of -43% and reducing the water expenses by 49%. This proves that grafting improves the water up take and may cope with water shortage.

Findings indicate too, that grafting reduces phytosanitary treatments’ expenses by about 50%. Since grafting reduces the need for pesticide application and increases the longevity and sustainability of the plant this is explained by the useful effect of grafting in controlling diseases and pathogens concerns.

Net revenue (gross Margin) is obtained by the difference between the value of the production and the operational cost. The results show that net revenue in grafting systems is 8669 TND/ha vs 2884 TND/ha in the non grafting systems realizing a shift of 201%.

The objective of this study was to compare the costs and returns of grafted vs. non grafted watermelon production fields in northern centre of Tunisia. The main results showed that the increase of purchase cost carried by using grafted watermelon plants is covered by a decrease of the phytosanitary treatment cost and the irrigation water cost due to the effect of grafting on plants resistance to soil-borne disease and the improvement of the rootstock water up take... Furthermore, grafting improves the production yield and fruit quality which led to a higher gross production value and consequently to a higher net revenue. Since the results show substantial potential benefits from an outreach program to diffuse the new technology.

Ioannou, N., Poullis, C. and Heale, J.B. 2000. Fusarium wilt of watermelon in Cyprus and its management by solarization combined with fumigation or ammonium fertilizers. EPPO Bul. 30:223-230. 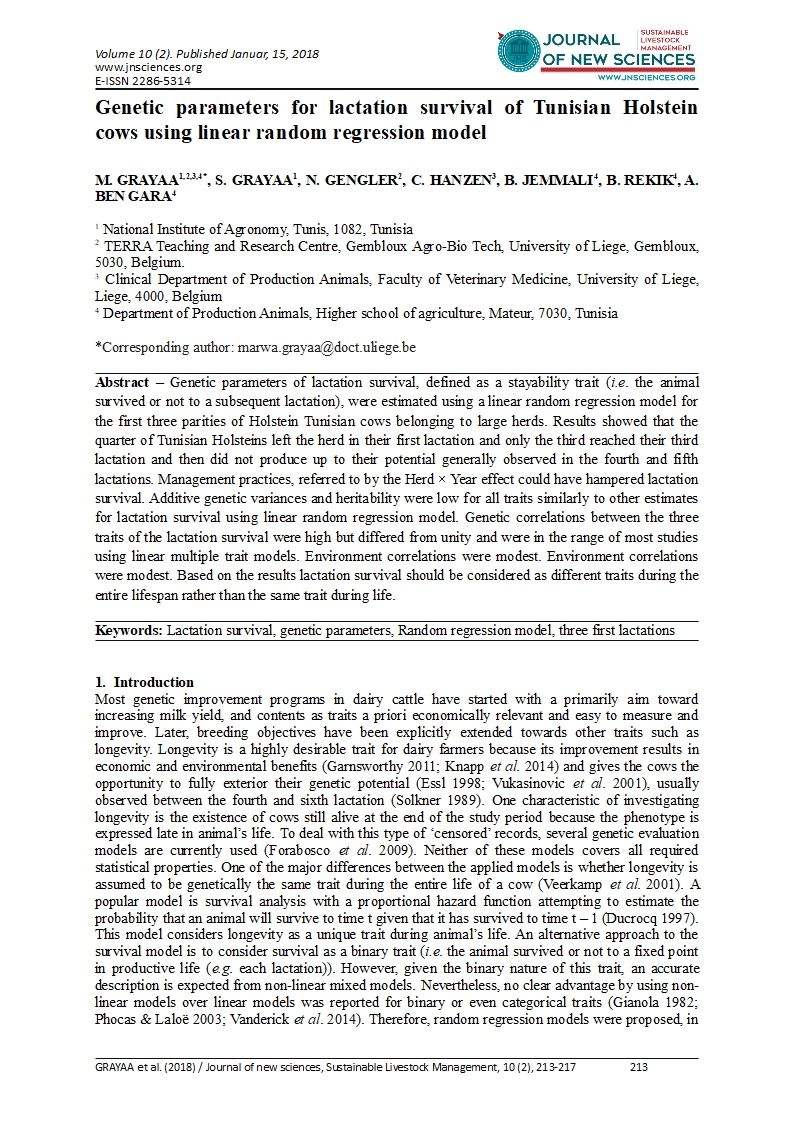 Abstract – Genetic parameters of lactation survival, defined as a stayability trait (i.e. the animal survived or not to a subsequent lactation), were estimated using a linear random regression model for the first three parities of Holstein Tunisian cows belonging to large herds. Results showed that the quarter of Tunisian Holsteins left the herd in their first lactation and only the third reached their third lactation and then did not produce up to their potential generally observed in the fourth and fifth lactations. Management practices, referred to by the Herd × Year effect could have hampered lactation survival. Additive genetic variances and heritability were low for all traits similarly to other estimates for lactation survival using linear random regression model. Genetic correlations between the three traits of the lactation survival were high but differed from unity and were in the range of most studies using linear multiple trait models. Environment correlations were modest. Environment correlations were modest. Based on the results lactation survival should be considered as different traits during the entire lifespan rather than the same trait during life.

Abstract – The purpose of the research was to evaluate the antibacterial activity of acetic by comparing certain germination parameters of two carrot seed lots. The first seed lot is infected with the fastidious plant pathogenic bacterium ‘Candidatus Liberibacter solanacearum’ recently detected in Tunisia while the second one was safe. Contaminated seeds were treated with acetic acid solutions at different concentrations of 5%, 10% and 20%. Seeds were tested on moist filter paper, in seed trays under controlled conditions. Results showed a clear significant difference between tested germination parameters of both lots of seeds, explaining thus the negative effect of this fastidious bacterium on germination parameters. Acetic acid treatment has a significant positive effect on germination parameters of contaminated carrot seeds. However, at the highest concentration, these parameters were negatively affected. These results may help carrot producers to develop a control strategy able to minimize the spread of this bacterium.