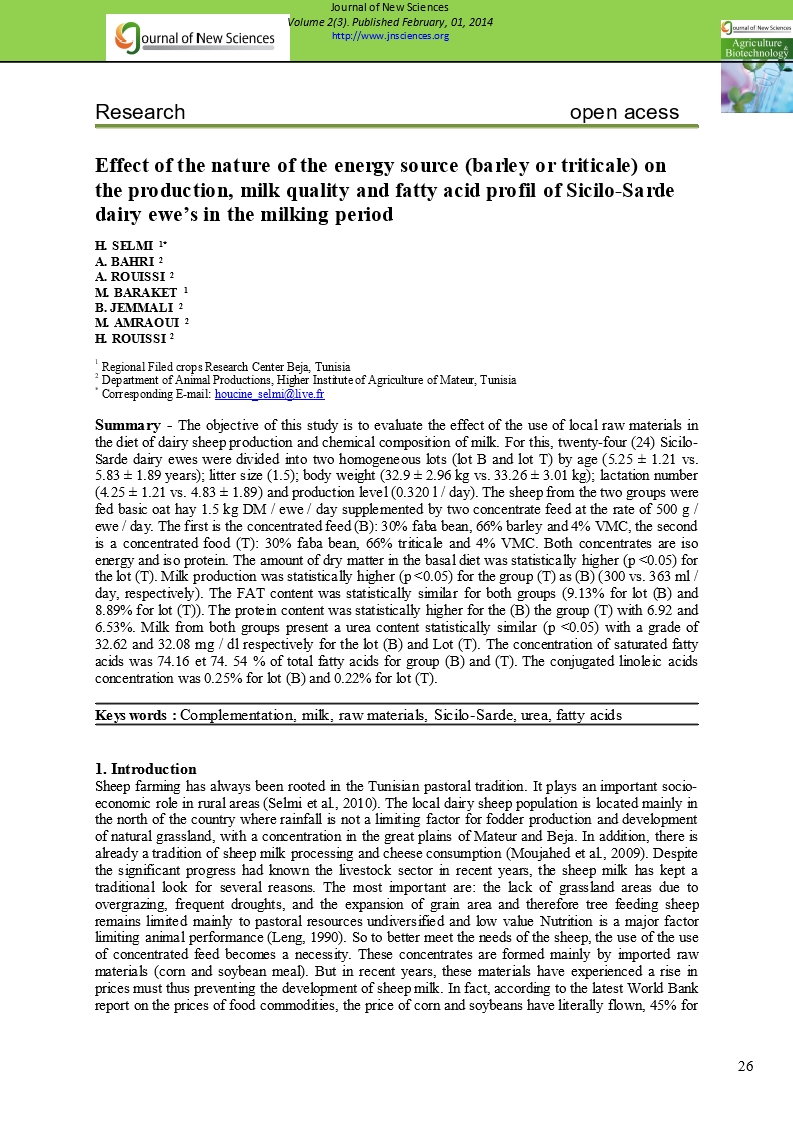 Sheep farming has always been rooted in the Tunisian pastoral tradition. It plays an important socio-economic role in rural areas (Selmi et al., 2010). The local dairy sheep population is located mainly in the north of the country where rainfall is not a limiting factor for fodder production and development of natural grassland, with a concentration in the great plains of Mateur and Beja. In addition, there is already a tradition of sheep milk processing and cheese consumption (Moujahed et al., 2009). Despite the significant progress had known the livestock sector in recent years, the sheep milk has kept a traditional look for several reasons. The most important are: the lack of grassland areas due to overgrazing, frequent droughts, and the expansion of grain area and therefore tree feeding sheep remains limited mainly to pastoral resources undiversified and low value Nutrition is a major factor limiting animal performance (Leng, 1990). So to better meet the needs of the sheep, the use of the use of concentrated feed becomes a necessity. These concentrates are formed mainly by imported raw materials (corn and soybean meal). But in recent years, these materials have experienced a rise in prices must thus preventing the development of sheep milk. In fact, according to the latest World Bank report on the prices of food commodities, the price of corn and soybeans have literally flown, 45% for maize and 30% for soybeans during 2012 (Selmi and al., 2013). Given the increase in prices of these two, you should look for indigenous and local raw materials cultivated in the region to feed our livestock covering their needs at lower cost. And it is in this context that fits our work where we will make a comparison between two types of concentrate consisting of purely local raw materials which are triticale and barley as an energy source and faba beans as a protein source performance in dairy sheep breed Sicilo-Sarde during the milking period.

The amounts of oat hay intake were determined daily by weighing the quantities distributed and accepted. The evolution of body weight is a weekly measurement. Throughout the period of the experiment, it was a weekly quantitative DHI with a rate of 2 manual milking per day: one at 8 am and the second at 16 pm. The study of the quality of milk was performed once a week on a sample of the milk mixture batch to measure the pH and determine the physico-chemical composition of milk by Lactoscan (Milkotronic LTD, serial No. 4696, Hungary). The measured quality parameters are density, fat, protein; dry defatted, lactose and freezing extract.

Data on the DM intake of the basal diet, changes in body weight, milk production, the chemical composition of milk urea content were subjected to statistical analysis by the MIXED procedure (SAS , 2000) using the following statistical model:

The amount was voluntarily ingested (1.414 and 1.387 kg DM / ewe / day respectively for lot T and B with a statistically significant difference between both groups (p <0.05) which implies that the quality of the food concentrate affects DM intake of oat hay. These results disagree with those found by Rouissi et al (2008). This trend can be explained by the rate of degradation of triticale and barley in the rumen (Selmi et al., 2013). The dry matter intake starts with a minimum value of 1.37 kg DM for sheep lot T and 1.398 kg DM for sheep lot B. This ingestion increases steadily to a level of 1.46 kg DM / day for the group (T) and a level of 1.45 kg DM / day for group (O). This increase can be explained by the adaptation of animals to different systems but also to the advancement of age in animals and increased body weight and therefore the intake capacity. It should be noted that the quantities of hay were previously set at 1.5 kg DM / day to provide a total feed intake. The average live weight of sheep in early experience was 34.43 kg batch T and 33.70 kg for lot B. There was no significant difference between the experimental diets for weight changes during the trial period. The live weight of sheep increased steadily during the trial to reach 36.93 and 35.25 kg respectively for lot (T) and lot (B). this trend is similar to that of Selmi et al (2011) and is attributed to the increase intake capacity and physiological characteristics of the sheep during this period (Barrillet et al., 2002).

The amount of milk produced per day was comparable to the beginning of the experiment (p> 0.05). The average daily milk production during the phase of the treatment is 363 ml / ewe / day for batch (T) and 300 ml / ewe / day for batch (B) with statistical difference (p <0.05) between batches. This can be explained by the nature of grain triticale rapid degradation in the rumen and promoting proliferation of rumen microorganisms and therefore maximize the ration (Sauvant, 2004) on the one hand and the higher content of seeds triticale total nitrogenous matter (13% DM) compared to that of barley (12.1%) of the other part (Jarrige 1988). The average milk production is relatively low for both regardless of the nature of the supplements compared to found Hammami et al (2009) and batch Selmi et al (2010). This may be due to the declining phase of the lactation curve, which coincides with the period of the test with a semi-weaning, while the authors cited previously worked during the suckling phase. The FAT content of the product by the sheep of the lot (B) (9.13%) milk is higher than that produced by the sheep from the lot (T) (8.89%) with no statistical difference (p> 0.05) (Table 2). The average fat content obtained in this study is higher compared to that reported by Hammami et al (2009) found that an average of 5.34 to 5.83% and worked during the suckling phase. According Bocquier and Caja (2001), the fat content of milk is generally negatively correlated with energy balance of sheep. The high fat content can be explained by the high energy value of triticale and barley (1.21 vs. 1.16 UFL) (Jarrige, 1988) and by the nature of faba bean seeds that are energy because the significant amount of starch it contains, which is close grain (INRA, 2002). Regardless of the type of diet, this trend can be explained by the phenomenon of dilution (decrease in milk production is accompanied by an increase in fat content) (Othman et al, 2002) (Barrillet et al, 2002. ). Proteins are the most important fraction of the milk. Indeed milk batch B is richer in protein content than the lot triticale is 6.92% and 6.53% respectively (p <.05). The protein content is higher compared to what was found by Mâamouri and Rouissi (2008) and Hammami et al (2009) who worked for the nursing of the Sicilian-Sardinian sheep phase. The richness of milk from sheep supplemented with concentrated feed (B) from the milk group (T) can be explained by the presence of a significant amount of tannin in grain triticale preventing degradation protein in the rumen (Larbier and Lerclercq 1992) As trypsin inhibitors thereby minimizing their digestibility compared to other cereals (Maisonnier-Grenier et al., 2005). Lactose is a milk sugar specific. It is almost the only carbohydrate sheep's milk. Statistical analysis revealed that the lactose content is significantly different (p <0.05) according to the plan. The average lactose content of the milk of sheep for the group (B) is higher compared to sheep lot (T). This is in agreement with the result of Rouissi et al (2008). It is 4.52% for lot B and 4.30% for lot T. These results are superior to those found by Selmi et al (2010) this could be due to the richness of the seed of barley carbohydrates that can reach 80% of the weight of the seed (Masucci et al., 2005) and wealth of field bean in readily degradable carbohydrate (starch) and cellulose present especially at the seed coat of faba bean by comparing it with that of soybean meal (Pottier, 2002). The urea content of the milk was statistically similar (p> 0.05) between the two groups regardless of diet. In fact, the contents were respectively 32.62 and 32.08 mg / dl for lots B and T. These values are consistent with results found by Selmi et al (2011). These values are explained can be explained by the quality of faba bean protein and contain a significant amount of condensed tannins in the husks of faba beans is 0.8 to 2.4 g / kg DM, and preventing the digestion proteins (Ben Abdejlil, 1999). Regardless of diet, the urea content of the milk of the two groups was in the range of sheep milk; this can be confirmed benefit balance energy - protein in the diet.

The influence of the incorporation of barley and triticale was an energy source in the formulation of feed concentrates in the diet of ewes for the quality of milk was analysis. The statistical analysis revealed that there were no differences among fatty acids in milk of both ewe groups regardless of the regime as shown in Table 3. The main fatty acid was palmitic acid C16 (28.31 ± 1.86% vs. 28.79 ± 2.27% of total FA for diets B and T, respectively) and miristic acid C14 (14.81 ± 0.66% for B and 15.19 ± 1.04% for T). This result converges with that advanced by Atti et al (2006) who have shown that milk from sheep fed a concentrate is rich in C16 and C14 compared to other types of fatty acids. The stearic acid (C18: 0) represented respectively 5.61 ± 1.53 and 4.31 ± 0.7% of TFA in milk of the B and T ewe groups. Capric acid (C10) occupied an intermediate place in concentration in the milk, the capric acid content was 11.23 ± 2.45 and 11.75 ± 1.96 % (p> 0.05) in the B and T groups. These contents are high compared to those reported by Luna et al (2005) and Collomb et al (2006) who worked on courses at different levels of altitude. Conjugated fatty acids appeared almost exclusively in the milk fat and meat in sheep. The CLA content of sheep milk are dependent on feeding conditions and the nature of the complementation. The concentration of CLA from this study was similar to that reported by Atti et al (2006) for a diet based on concentrate feed but was lower compared with milk from sheep grazing on ryegrass or barley reported by the same authors. This concentration was 0.25 and 0.22% TFA comparable (p> 0.05) between B and T groups of ewes.

The incorporation of a protein crop and indigenous energy sources available and cultivated as faba bean, triticale and barley in the formulation of concentrated feed for sheep, is a very important solution for producers to meet the needs protein and energy sheep. Indeed, their nutritional characteristics make it a possible alternative to soybean meal and corn imported food had their important values. Thus, the extension to farmers seems to be very important for them to be able to provide food for their herds locally and cheaper products. It should also look for other local sources replacing corn and soybeans as lupine and pea. It must also select varieties of faba bean and Triticale low levels of tannins to improve milk production.

Selmi H Jemmali B. Ben Gara A Rekik B et Rouissi H (2013) Alternative feed resources and their effects on the parameters of rumen fermentation, in situ degradability, the population of ciliated protozoa and the in vitro gas production profile in Sicilo – Sarde sheep. Iranian Journal of Animal Science, 3(1): pp483-491.