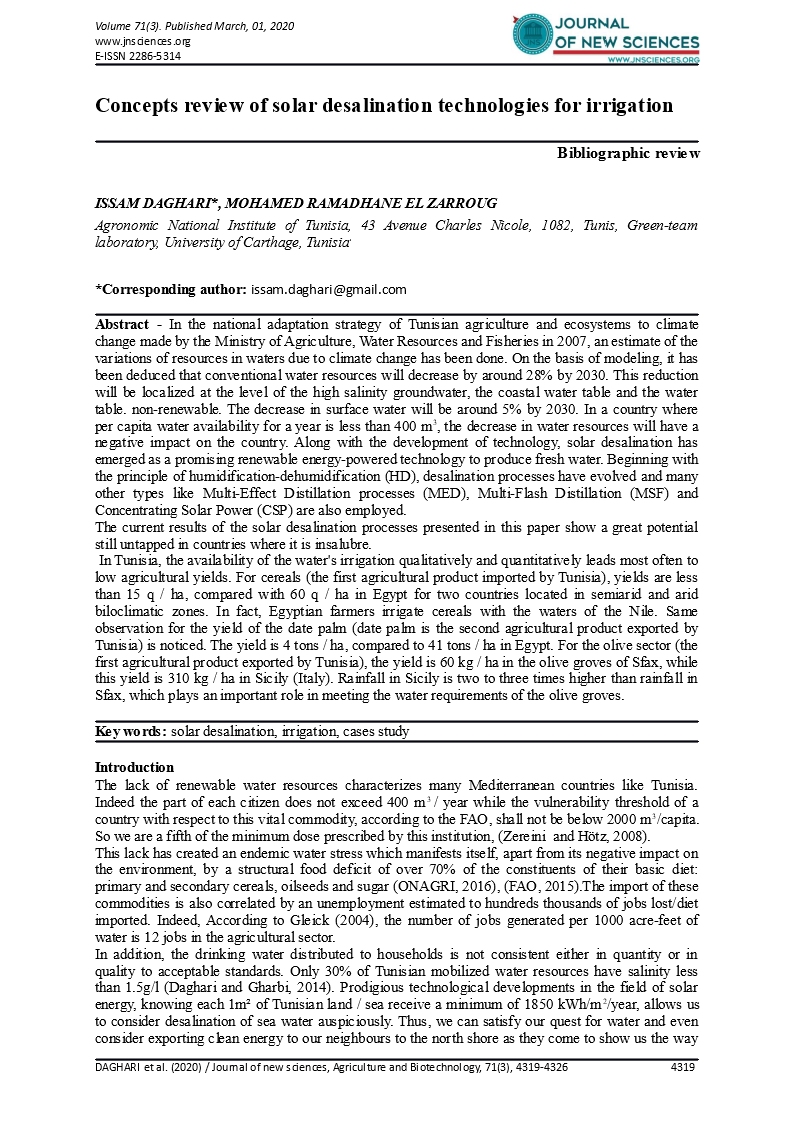 Abstract - In the national adaptation strategy of Tunisian agriculture and ecosystems to climate change made by the Ministry of Agriculture, Water Resources and Fisheries in 2007, an estimate of the variations of resources in waters due to climate change has been done. On the basis of modeling, it has been deduced that conventional water resources will decrease by around 28% by 2030. This reduction will be localized at the level of the high salinity groundwater, the coastal water table and the water table. non-renewable. The decrease in surface water will be around 5% by 2030. In a country where per capita water availability for a year is less than 400 m3, the decrease in water resources will have a negative impact on the country. Along with the development of technology, solar desalination has emerged as a promising renewable energy-powered technology to produce fresh water. Beginning with the principle of humidification-dehumidification (HD), desalination processes have evolved and many other types like Multi-Effect Distillation processes (MED), Multi-Flash Distillation (MSF) and Concentrating Solar Power (CSP) are also employed. The current results of the solar desalination processes presented in this paper show a great potential still untapped in countries where it is insalubre. In Tunisia, the availability of the water's irrigation qualitatively and quantitatively leads most often to low agricultural yields. For cereals (the first agricultural product imported by Tunisia), yields are less than 15 q / ha, compared with 60 q / ha in Egypt for two countries located in semiarid and arid biloclimatic zones. In fact, Egyptian farmers irrigate cereals with the waters of the Nile. Same observation for the yield of the date palm (date palm is the second agricultural product exported by Tunisia) is noticed. The yield is 4 tons / ha, compared to 41 tons / ha in Egypt. For the olive sector (the first agricultural product exported by Tunisia), the yield is 60 kg / ha in the olive groves of Sfax, while this yield is 310 kg / ha in Sicily (Italy). Rainfall in Sicily is two to three times higher than rainfall in Sfax, which plays an important role in meeting the water requirements of the olive groves. 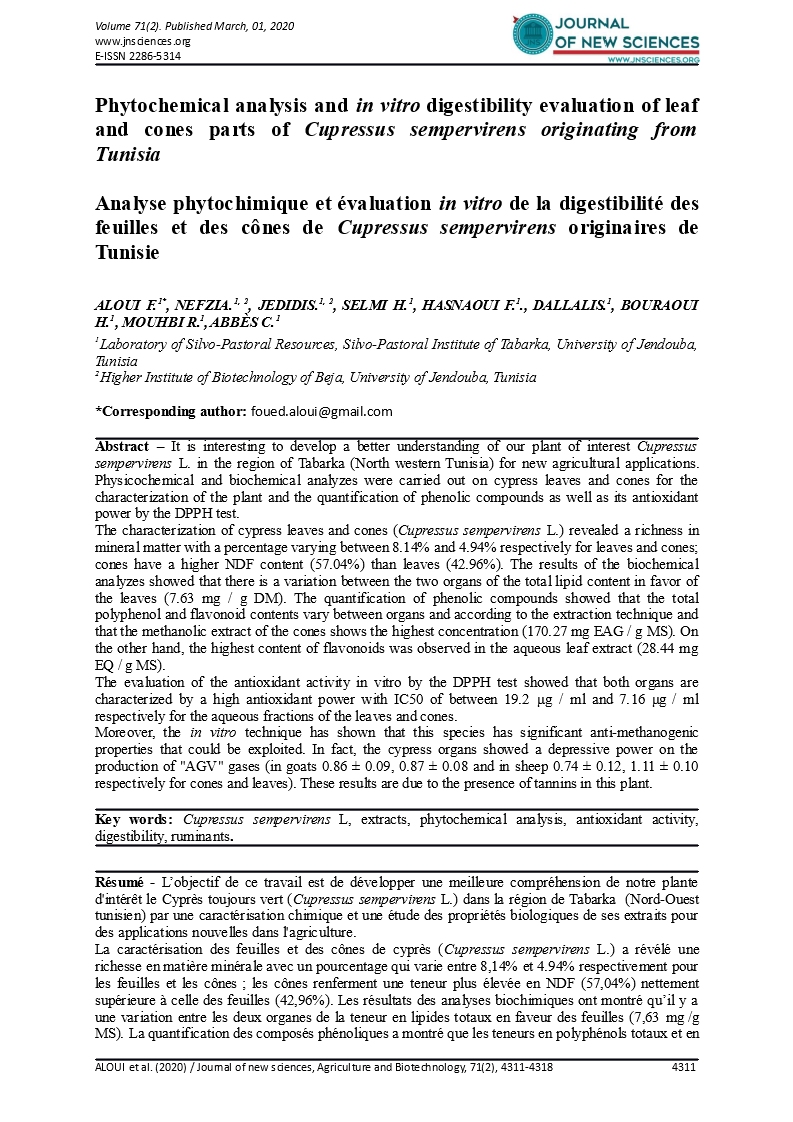 2Higher Institute of Biotechnology of Beja, University of Jendouba, Tunisia

Abstract – It is interesting to develop a better understanding of our plant of interest Cupressus sempervirens L. in the region of Tabarka (North western Tunisia) for new agricultural applications. Physicochemical and biochemical analyzes were carried out on cypress leaves and cones for the characterization of the plant and the quantification of phenolic compounds as well as its antioxidant power by the DPPH test. The characterization of cypress leaves and cones (Cupressus sempervirens L.) revealed a richness in mineral matter with a percentage varying between 8.14% and 4.94% respectively for leaves and cones; cones have a higher NDF content (57.04%) than leaves (42.96%). The results of the biochemical analyzes showed that there is a variation between the two organs of the total lipid content in favor of the leaves (7.63 mg / g DM). The quantification of phenolic compounds showed that the total polyphenol and flavonoid contents vary between organs and according to the extraction technique and that the methanolic extract of the cones shows the highest concentration (170.27 mg EAG / g MS). On the other hand, the highest content of flavonoids was observed in the aqueous leaf extract (28.44 mg EQ / g MS). The evaluation of the antioxidant activity in vitro by the DPPH test showed that both organs are characterized by a high antioxidant power with IC50 of between 19.2 μg / ml and 7.16 μg / ml respectively for the aqueous fractions of the leaves and cones. Moreover, the in vitro technique has shown that this species has significant anti-methanogenic properties that could be exploited. In fact, the cypress organs showed a depressive power on the production of "AGV" gases (in goats 0.86 ± 0.09, 0.87 ± 0.08 and in sheep 0.74 ± 0.12, 1.11 ± 0.10 respectively for cones and leaves). These results are due to the presence of tannins in this plant. 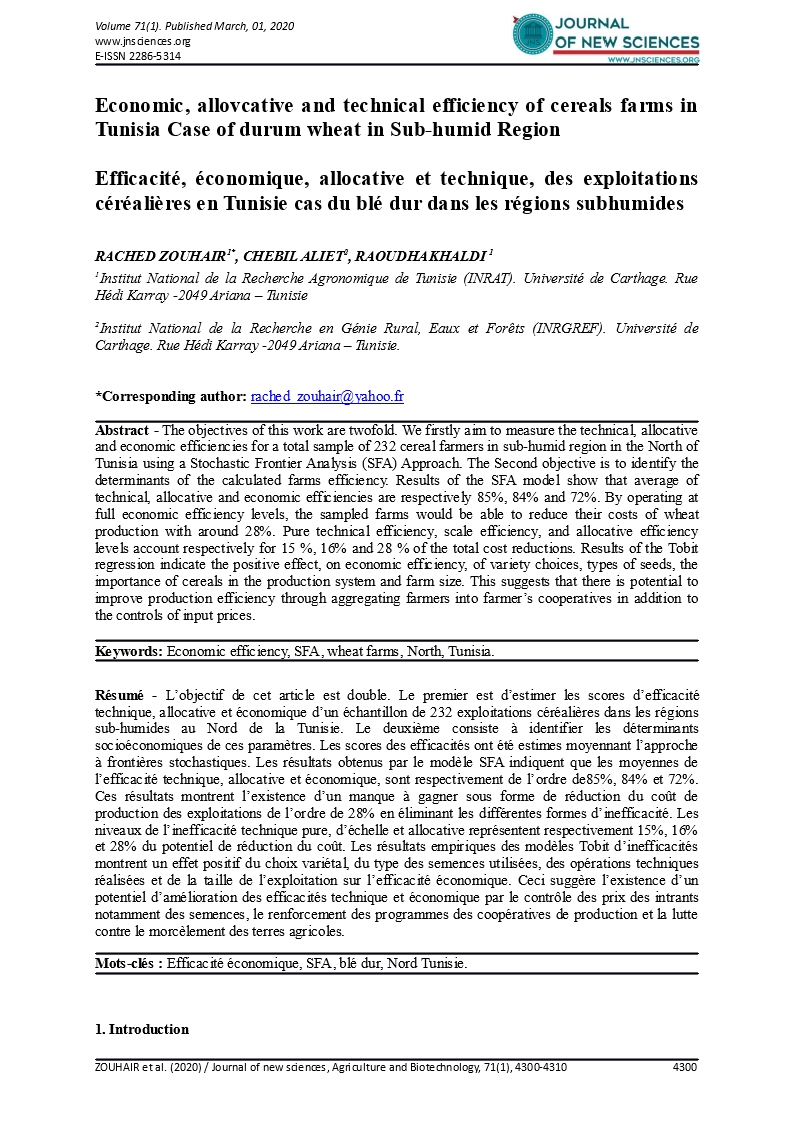 Abstract - The objectives of this work are twofold. We firstly aim to measure the technical, allocative and economic efficiencies for a total sample of 232 cereal farmers in sub-humid region in the North of Tunisia using a Stochastic Frontier Analysis (SFA) Approach. The Second objective is to identify the determinants of the calculated farms efficiency. Results of the SFA model show that average of technical, allocative and economic efficiencies are respectively 85%, 84% and 72%. By operating at full economic efficiency levels, the sampled farms would be able to reduce their costs of wheat production with around 28%. Pure technical efficiency, scale efficiency, and allocative efficiency levels account respectively for 15 %, 16% and 28 % of the total cost reductions. Results of the Tobit regression indicate the positive effect, on economic efficiency, of variety choices, types of seeds, the importance of cereals in the production system and farm size. This suggests that there is potential to improve production efficiency through aggregating farmers into farmer’s cooperatives in addition to the controls of input prices.