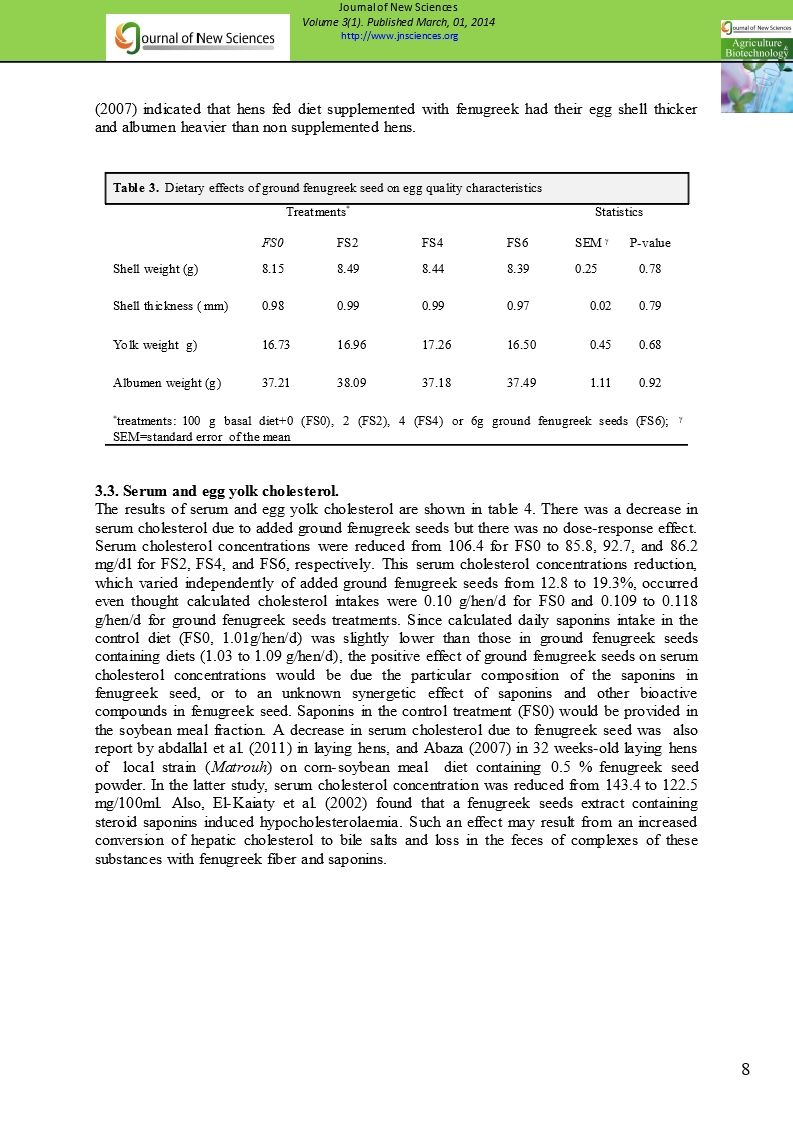 Despite many medicinal properties attributed to fenugreek seed (Trigonella foenum graecum L) (Basu 2006; Acharya et al. 2006; Acharya et al. 2008), there is scanty documented literature on its use to lower egg yolk cholesterol. Fenugreek seeds used at low dietary levels (0.1 to 2%) reportedly showed egg yolk cholesterol reduction around 7% (Nasra et al. 2010; Safaa 2007). It has been widely used as a spice and herbal remedy for lowering blood glucose and cholesterol levels in experimental animals and human (Basu 2006; Basu et al. 2007). The hypoglycemic effect is thought to be associated with the fiber fraction whereas the cholesterol-lowering effect is attributed to the saponins components (Sidhu and Okenfull 1986) which were documented to be about 5-6% and of steroidal nature with diosgenin as main sapogenin (Sauvaire et al.1996).

This study was conducted with the main objective of investigating the effect of different dietary-amounts of ground fenugreek seeds on laying performance and cholesterol content in egg-yolk of laying hens.

Forty Lohmann White laying hens aged 52 weeks were divided randomly into four treatment groups with 10 birds each. They were allocated each group to one of the preformulated four dietary treatments viz: control basal diet (FS0), basal diet +2 g ground fenugreek seeds, basal diet + 4 g ground fenugreek seeds and basal diet + 6 g ground fenugreek seeds. These treatments were referred to as FS0, FS2, FS4 or FS6, respectively. Each hen was daily fed the set quantity of ground fenugreek seeds blended with 100 g of basal diet. The composition of the ground fenugreek seeds is shown in the footnotes of Table 1. The basal diet or control diet was a commercial feed that contained yellow corn (630g/kg), soybean meal (250g/kg), calcium carbonate (80g/kg) and a mineral-vitamin mixture (40g/kg). Because of the lack of available suited ingredients and to avoid oil incorporation which has been reported to affect egg cholesterol (Aida et al. 2005), the four mixtures were neither made isocaloric nor isonitrogenus. The hens were housed in individual cages with individual feed-trough and common water-trough in a room with ambient temperature of about 20°C and a photoperiod of 16 h light: 8h darkness cycle. Water was provided ad libitum intake throughout the trial period which comprised an adaptation sub-period (8days) during which all birds received the basal diet and a test sub-period (49 days) during which birds received their respective experimental diets.

All the birds were weighed individually at the start and at the end of the experiment to determine the live weight changes. Feed consumption was measured weekly and feed efficiency (feed intake / (number of eggs x egg weight)) was calculated. Egg production was recorded daily and hen-day laying rate (%) was calculated as the ratio between the number of laid eggs and the number of feeding days. The eggs laid during days 44 to 45 of experiment were used for analysis of egg qualities (egg weight, shell weight, egg shell thickness, yolk weight and yolk cholesterol). Blood samples (4 ml) were collected at the end of the experiment (day 49) from the brachial wing vein using sterilized syringes and needles and used for serum cholesterol determination after centrifugation at 2000 rpm for 10 min.

Dry matter of the diets (DM) was determined at 104°C for 24 h while all other analyses were done on samples dried at 65°C and ground in a mill to pass through a 0.5mm screen. Ash content was determined by igniting the ground sample at 550° C in a muffle furnace for 12 h. The Association of Official Analytical Chemists method (AOAC 1984) was used for crude proteins (CP) determination. Acid detergent fiber (ADF) and neutral detergent fiber (NDF) were determined as described by Van Soest et al. (1991) but sodium sulphite and alpha amylase were omitted from the NDF procedure. An enzymatic method (cholesterol enzymatic colorimetric test, CHOD-PAP, Biomaghreb, Tunisia) was used for cholesterol in serum and in egg yolk solubilized in 2% (w/v) NaCl solution (Pasin et al. 1998). Cholesterol in feed was determined by a spectrophotometric method employing ferric chloride in glacial acetic acid on lipid extract (Osman and Chin 2006). Saponins content was measured with the vanillin–perchloric acid colorimetric method as described by Wang et al. (2007) with some modifications. A volume of 0.1 or 0.075 ml of the diluted methanol crude extract of 0.2 g defatted samples was dried at 70 °C in a water bath after which 0.1 ml of 5% (w/v) vanillin-glacial acetic acid solution and 0.4 ml perchloric acid were added. The tube containing the mixture was vortex stirred to ensure complete distribution, plagued with glass marble and transferred to a water bath at 70°C for 15 min. It was removed thereafter and placed in ice-water to cool. Following this, 2.5 ml glacial acetic acid was added to each tube. The solution was mixed well and the absorbance measured against a freshly prepared blank reagent at 540 nm. A standard calibration plot was generated using known concentrations of saponins (cat №: 8047-15-2, Riedel de Haen).

The experiment was a completely randomized design with each hen used or egg tested as the experimental unit. Collected data were subjected to analysis of variance using the GLM procedure of SAS (1989). Orthogonal contrasts and multiple comparison tests were performed among treatments when variables were significant.

In the present study, because of the restriction on feed distribution, the hens showed slight loss of body weight throughout the 49d-experimental period. Those on FS6 showed the greatest body weight loss: 115.3 vs 0.31 to 0.97g/ hen. These results did not agree with the findings of Nasra et al. (2010)) and Moustafa (2006) who found significant increase in live body weight gain due to 0.1 or 0.5 and 0.05% fenugreek seed levels, respectively. This difference in results may due to the differences in the amounts of feed offered, and in hens’ strains and ages.

Despite the loss of their body weight, all hens irrespective of their ground fenugreek seeds treatment, maintained their weekly egg production rate unchanged throughout the 7 wk-experimental period. The overall mean egg production rate was not affected by ground fenugreek seeds levels (P>0.07) and ranged from 79.4 (FS6) to 83.7% (FS0). Such results may suggest that egg production was prior to body weight maintenance. Again, ground fenugreek seeds at the rate of 6 g/hen/d tended to reduce egg production even though it was associated with the highest feed intake. Ground fenugreek seeds showed also no significant effect on egg weight and egg mass which tended to be the lowest for FS6. Again, these results did not agree with those reported by Nasra et al. (2010) and Moustafa (2006). The former reported increased egg production rate and egg mass for hens on 0.1 or 0.5% ground fenugreek seeds, and decreased egg weight for hens on 0.5% ground fenugreek seeds. The latter found significant increase in egg production rate and egg mass with 0.05 or 0.15 % fenugreek seed levels, while egg weight was increased only by the 0.05 % fenugreek inclusion level. The results found herein showed that while feed conversion ratio (feed intake/egg mass) was not affected (P>0.07) by ground fenugreek seeds inclusion, it was the highest for FS6: 2.17 vs 1.93, 2.01 and 2.06 for FS0, SF2, and FS4, respectively. Such results would suggest that fenugreek seeds at high levels may exercise an adverse effect by mechanisms that cannot yet be explained with certitude. However, it is tempting to relate this to the saponins components even thought calculated saponins intakes were almost the same (1.01 to 1.09 g/hen/d). In this regard, fenugreek crude seed saponins administrated for 21 days to 7-d-old chicks at levels of 10 or 50 mg / kg BW or in drinking water at 500 mg /kg BW depressed body weights and caused some pathological changes among which liver fatty cytoplasmic vacuolation and necrosis of hepatocytes, epithelial degeneration of renal tubules, and varying degrees of hemorrhage in the thigh and breast (Nakhla et al. 1991). Some of other adverse effects ascribed to several properties of saponins are: reduction in intestinal motility (Klita et al. 1996), damage to the intestinal membrane, inhibition of nutrient transport and production of active metabolites (Wakabayashi et al., 1998). In contrast to such finding, Rao et al. (1996) found that there were no significant hematological, hepatic, or histopathological changes in weanling rats fed fenugreek seeds for 90 days.

Effects of ground fenugreek seeds on egg quality characteristics are presented in Table 3. These data show that there was no significant effect on yolk weigh, albumen weight and on shell thickness and weight.

Results reported herein were in agreement with those reported by Abdalla et al. (2011) but not with those of Nasra et al. (2010) who found that the yolk percent was decreased significantly by 0.5% fenugreek compared to control treatment. In contrast, El-Kaiaty et al. (2002) indicated that fenugreek had a significant increase in yolk and albumen weights. Abaza (2007) indicated that hens fed diet supplemented with fenugreek had their egg shell thicker and albumen heavier than non supplemented hens.

Considering the data obtained herein, it can be concluded that ground fenugreek seed given to Lohmann White laying hens at up to 6 g/hen/d had no effect on laying performance and egg quality but reduced hen’s serum cholesterol. Further studies may be needed to sort out the differences observed among research groups. Some of them may compare various fenugreek seed genotypes and processing treatments.