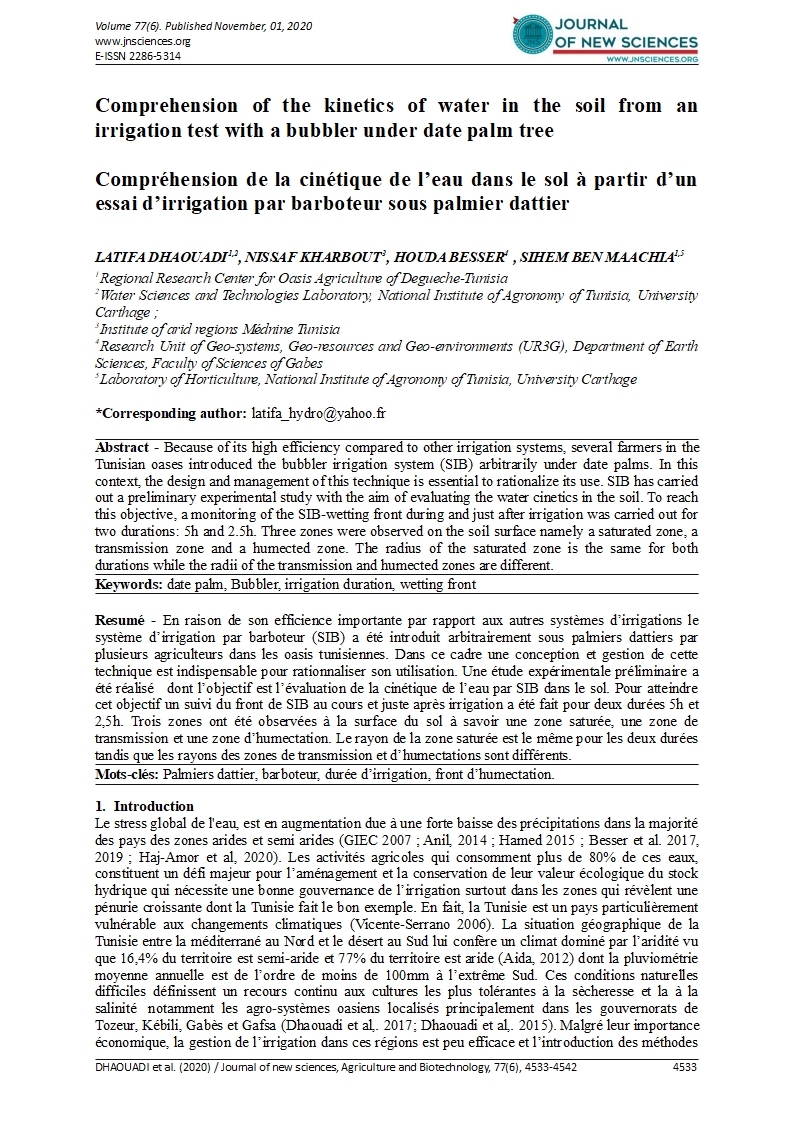 Abstract - Because of its high efficiency compared to other irrigation systems, several farmers in the Tunisian oases introduced the bubbler irrigation system (SIB) arbitrarily under date palms. In this context, the design and management of this technique is essential to rationalize its use. SIB has carried out a preliminary experimental study with the aim of evaluating the water cinetics in the soil. To reach this objective, a monitoring of the SIB-wetting front during and just after irrigation was carried out for two durations: 5h and 2.5h. Three zones were observed on the soil surface namely a saturated zone, a transmission zone and a humected zone. The radius of the saturated zone is the same for both durations while the radii of the transmission and humected zones are different.

Abstract - Fusarium crown rot (FCR) is a devastating wheat disease caused by Fusarium culmorum. The plants respond to infection by inducing a set of defence related enzymes. In this current study, seed coating with Trichoderma harzianum, known as biocontrol agent, was released on durum wheat grains of the cultivar ‘Karim’ in order to investigate its effects on F. culmorum resistance and antioxidant metabolites synthesis, under controlled conditions. Seed coating with a commercial product “Panoramix” was applied as reference, which is based on T. harzianum and mycorrhiza. Following Fusarium-inoculation, the results showed that the plants treated by T. harzianum induced wheat defence mechanisms by significantly reducing the necrotic symptoms in wheat crown compared to control plants with 50% of rate reduction of severity index at 10dpi (days post infection). The activities of peroxidase, catalase, chitinase as well as phenolic compounds were highly induced since the start of stress in plants treated by Trichoderma compared to plants treated by Panoramix. Both treatments significantly decrease 40% the pro-oxidant H2O2 content compared to control. These results suggest that T. harzianum reduce the H2O2 damage by enhancing the antioxidant defence mechanisms in response to the Fusarium challenge. Hence, the seed coating with T. harzianum may be considered as a potential strategy to alleviate of the oxidative stress caused by the FCR disease in durum wheat. 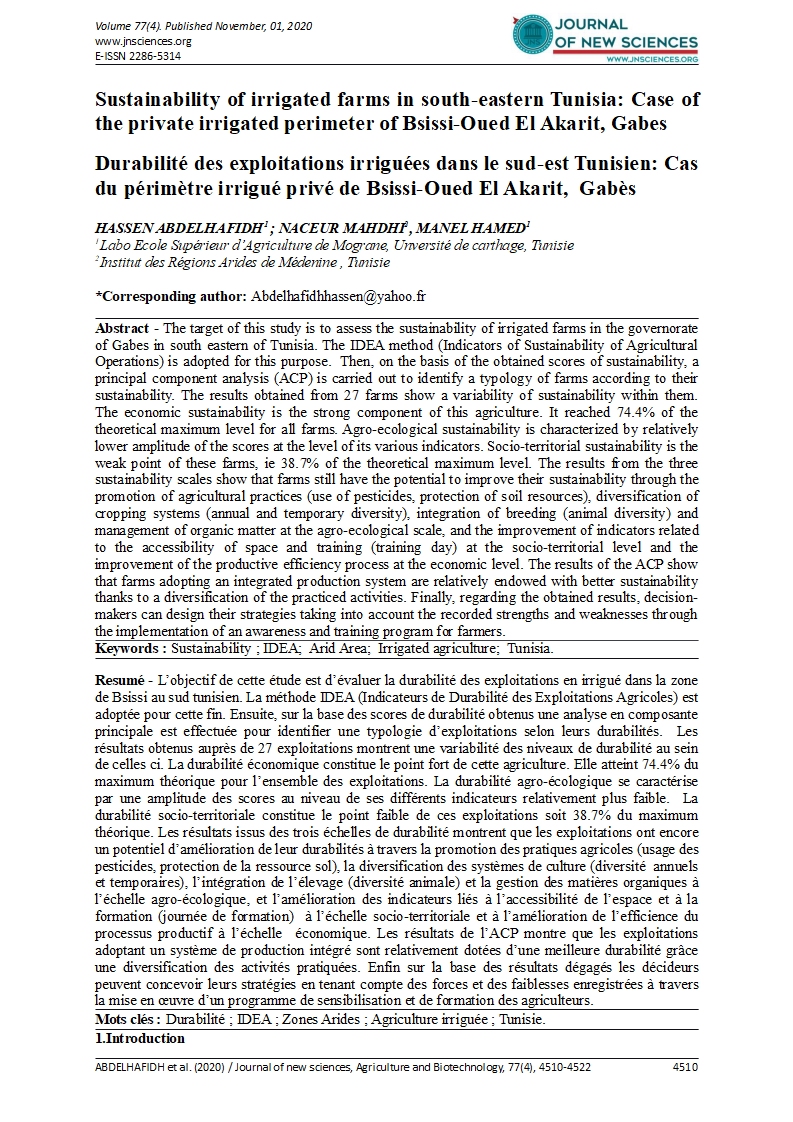 Abstract - The target of this study is to assess the sustainability of irrigated farms in the governorate of Gabes in south eastern of Tunisia. The IDEA method (Indicators of Sustainability of Agricultural Operations) is adopted for this purpose. Then, on the basis of the obtained scores of sustainability, a principal component analysis (ACP) is carried out to identify a typology of farms according to their sustainability. The results obtained from 27 farms show a variability of sustainability within them. The economic sustainability is the strong component of this agriculture. It reached 74.4% of the theoretical maximum level for all farms. Agro-ecological sustainability is characterized by relatively lower amplitude of the scores at the level of its various indicators. Socio-territorial sustainability is the weak point of these farms, ie 38.7% of the theoretical maximum level. The results from the three sustainability scales show that farms still have the potential to improve their sustainability through the promotion of agricultural practices (use of pesticides, protection of soil resources), diversification of cropping systems (annual and temporary diversity), integration of breeding (animal diversity) and management of organic matter at the agro-ecological scale, and the improvement of indicators related to the accessibility of space and training (training day) at the socio-territorial level and the improvement of the productive efficiency process at the economic level. The results of the ACP show that farms adopting an integrated production system are relatively endowed with better sustainability thanks to a diversification of the practiced activities. Finally, regarding the obtained results, decision-makers can design their strategies taking into account the recorded strengths and weaknesses through the implementation of an awareness and training program for farmers. 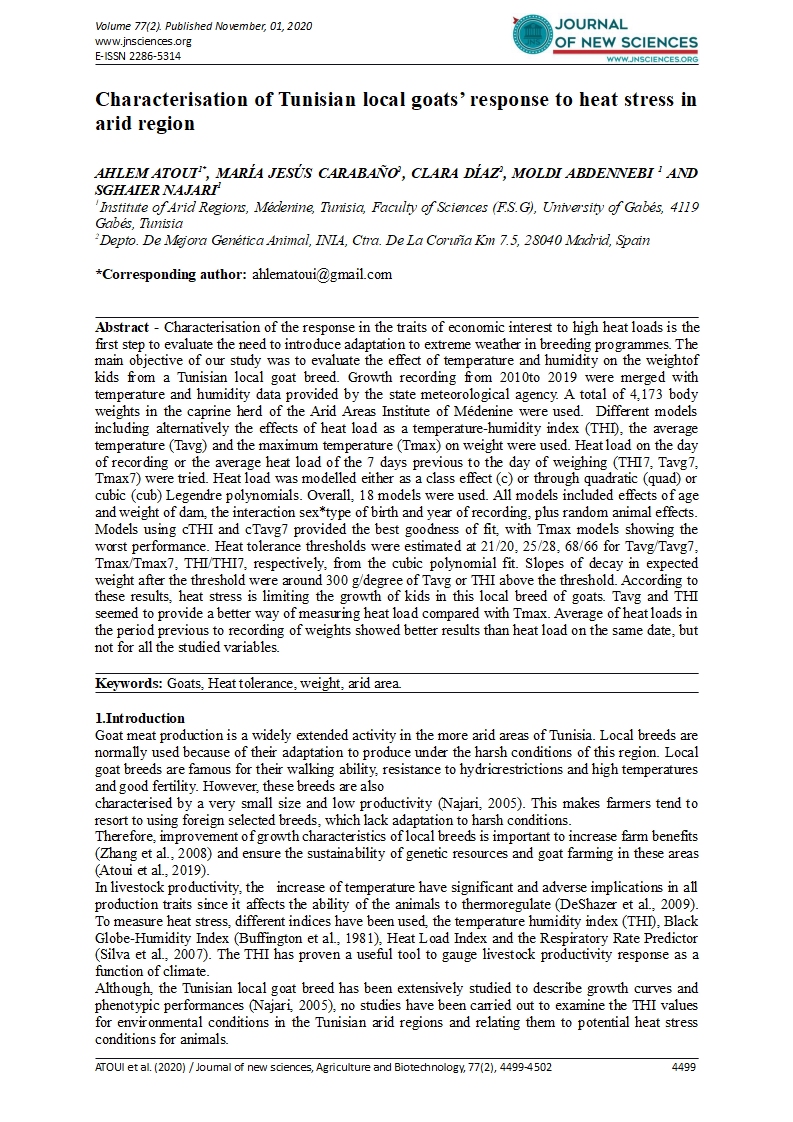 Abstract - Characterisation of the response in the traits of economic interest to high heat loads is the first step to evaluate the need to introduce adaptation to extreme weather in breeding programmes. The main objective of our study was to evaluate the effect of temperature and humidity on the weightof kids from a Tunisian local goat breed. Growth recording from 2010to 2019 were merged with temperature and humidity data provided by the state meteorological agency. A total of 4,173 body weights in the caprine herd of the Arid Areas Institute of Médenine were used. Different models including alternatively the effects of heat load as a temperature-humidity index (THI), the average temperature (Tavg) and the maximum temperature (Tmax) on weight were used. Heat load on the day of recording or the average heat load of the 7 days previous to the day of weighing (THI7, Tavg7, Tmax7) were tried. Heat load was modelled either as a class effect (c) or through quadratic (quad) or cubic (cub) Legendre polynomials. Overall, 18 models were used. All models included effects of age and weight of dam, the interaction sex*type of birth and year of recording, plus random animal effects. Models using cTHI and cTavg7 provided the best goodness of fit, with Tmax models showing the worst performance. Heat tolerance thresholds were estimated at 21/20, 25/28, 68/66 for Tavg/Tavg7, Tmax/Tmax7, THI/THI7, respectively, from the cubic polynomial fit. Slopes of decay in expected weight after the threshold were around 300 g/degree of Tavg or THI above the threshold. According to these results, heat stress is limiting the growth of kids in this local breed of goats. Tavg and THI seemed to provide a better way of measuring heat load compared with Tmax. Average of heat loads in the period previous to recording of weights showed better results than heat load on the same date, but not for all the studied variables. 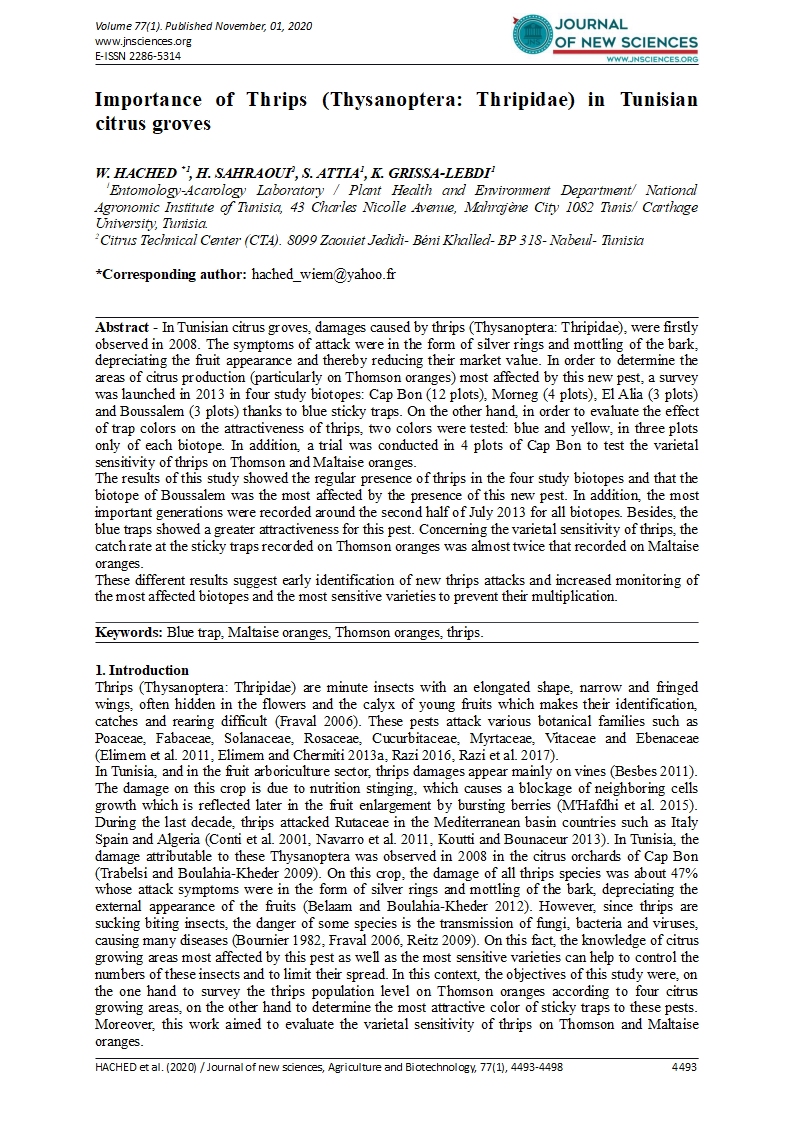 Abstract - In Tunisian citrus groves, damages caused by thrips (Thysanoptera: Thripidae), were firstly observed in 2008. The symptoms of attack were in the form of silver rings and mottling of the bark, depreciating the fruit appearance and thereby reducing their market value. In order to determine the areas of citrus production (particularly on Thomson oranges) most affected by this new pest, a survey was launched in 2013 in four study biotopes: Cap Bon (12 plots), Morneg (4 plots), El Alia (3 plots) and Boussalem (3 plots) thanks to blue sticky traps. On the other hand, in order to evaluate the effect of trap colors on the attractiveness of thrips, two colors were tested: blue and yellow, in three plots only of each biotope. In addition, a trial was conducted in 4 plots of Cap Bon to test the varietal sensitivity of thrips on Thomson and Maltaise oranges. The results of this study showed the regular presence of thrips in the four study biotopes and that the biotope of Boussalem was the most affected by the presence of this new pest. In addition, the most important generations were recorded around the second half of July 2013 for all biotopes. Besides, the blue traps showed a greater attractiveness for this pest. Concerning the varietal sensitivity of thrips, the catch rate at the sticky traps recorded on Thomson oranges was almost twice that recorded on Maltaise oranges. These different results suggest early identification of new thrips attacks and increased monitoring of the most affected biotopes and the most sensitive varieties to prevent their multiplication.