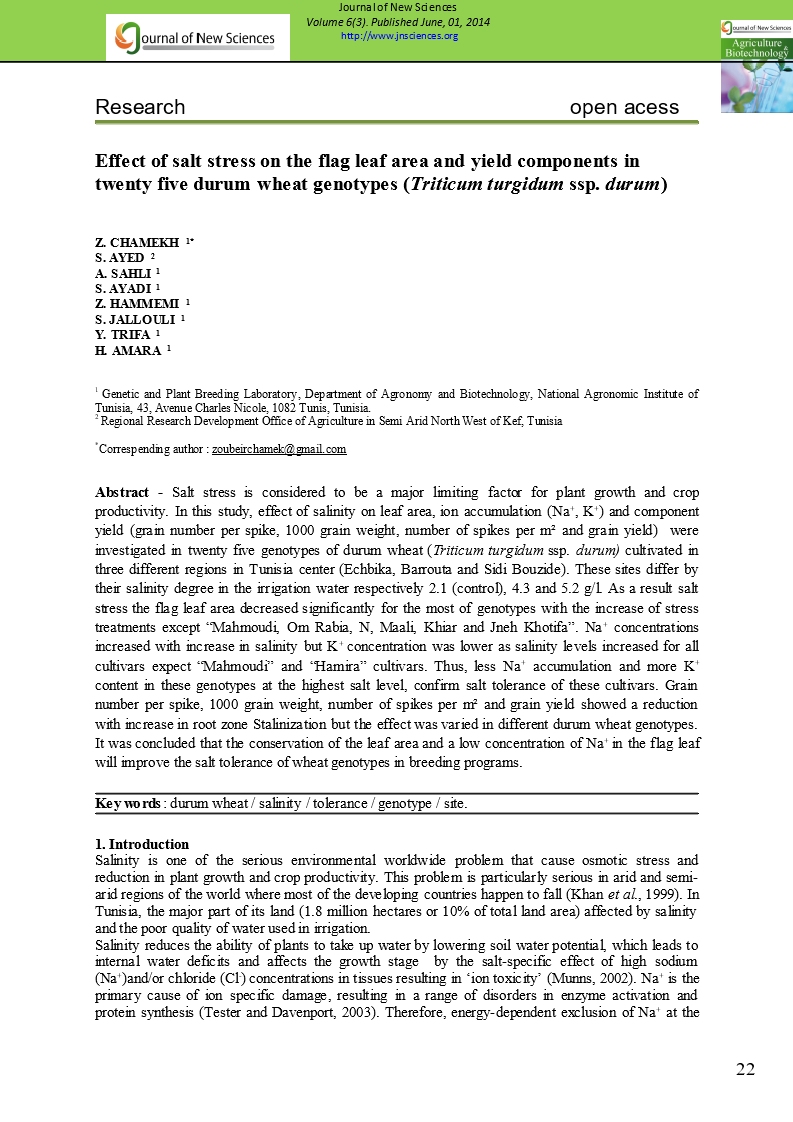 Abstract - Salt stress is considered to be a major limiting factor for plant growth and crop productivity. In this study, effect of salinity on leaf area, ion accumulation (Na+, K+) and component yield (grain number per spike, 1000 grain weight, number of spikes per m² and grain yield) were investigated in twenty five genotypes of durum wheat (Triticum turgidum ssp. durum) cultivated in three different regions in Tunisia center (Echbika, Barrouta and Sidi Bouzide). These sites differ by their salinity degree in the irrigation water respectively 2.1 (control), 4.3 and 5.2 g/l. As a result salt stress the flag leaf area decreased significantly for the most of genotypes with the increase of stress treatments except “Mahmoudi, Om Rabia, N, Maali, Khiar and Jneh Khotifa”. Na+ concentrations increased with increase in salinity but K+ concentration was lower as salinity levels increased for all cultivars expect “Mahmoudi” and “Hamira” cultivars. Thus, less Na+ accumulation and more K+ content in these genotypes at the highest salt level, confirm salt tolerance of these cultivars. Grain number per spike, 1000 grain weight, number of spikes per m² and grain yield showed a reduction with increase in root zone Stalinization but the effect was varied in different durum wheat genotypes. It was concluded that the conservation of the leaf area and a low concentration of Na+ in the flag leaf will improve the salt tolerance of wheat genotypes in breeding programs.

Salinity is one of the serious environmental worldwide problem that cause osmotic stress and reduction in plant growth and crop productivity. This problem is particularly serious in arid and semi-arid regions of the world where most of the developing countries happen to fall (Khan et al., 1999). In Tunisia, the major part of its land (1.8 million hectares or 10% of total land area) affected by salinity and the poor quality of water used in irrigation.

Salinity reduces the ability of plants to take up water by lowering soil water potential, which leads to internal water deficits and affects the growth stage by the salt-specific effect of high sodium (Na+)and/or chloride (Cl-) concentrations in tissues resulting in ‘ion toxicity’ (Munns, 2002). Na+ is the primary cause of ion specific damage, resulting in a range of disorders in enzyme activation and protein synthesis (Tester and Davenport, 2003). Therefore, energy-dependent exclusion of Na+ at the root level and maintenance of high potassium (K+)at the shoot level are vital for the plants to grow in saline environments (Colmer et al., 2006). Thus, the interaction between relative K+ and Na+ concentration has been considered a key factor in determining salt tolerance in plants (Willadino and Câmara, 2005). Restriction of leaf growth is among the earliest visible effects of salinity stress because leaves determine radiation interception and are the main photosynthetic organs (Taleisnik, et al., 2009). Salinity effects on leaf expansion and function are directly related to yield constraints under saline conditions (Taleisnik et al., 2009). Cereal plants are the most sensitive to salinity during the vegetative and early reproductive stages and less sensitive during flowering and during. However, a difference in the salt tolerance among genotypes may also occur at different growth stages (Zeng et al., 2002). Durum wheat (Triticum turgidum ssp. durum) is considered to be moderately tolerant of salinity (Maas, 1986). The strategy used by tolerant genotypes of durum wheat under saline stress conditions consists in limiting the reduction of leaf area to preserve its photosynthetic potentialities. Thus, the reduction in grain yield is less marked for tolerant genotype than for sensible genotypes for both levels of saline stress conditions (Alem, 2002). Crop yield is directly related to leaf area development, photosynthesis rate, and assimilate partition (Hay and Porter, 2006). Therefore, the salt tolerance of different wheat genotypes must be evaluated at different growth stages. Improving salt tolerance of wheat genotypes has been inhibited by a number of factors, such as the lack of effective evaluation methods for salt tolerance to screen the genotypes in breeding programs, low selection efficiency using overall agronomic parameters, and a complex phenomenon involving morphological, physiological and biochemical parameters among genotypes (Zeng et al., 2002). In this study, flag leaf area leaf Na+ and K+ concentration and 4 agronomic traits were measured to evaluate the salt tolerance in 25 wheat cultivars.

Five soil samples were taken in each site (three blocs) from (0-40 cm depth). Soil analysis presented in the tables 1 and 2.

Irrigation water for the experimental fields was taken directly from the sounding. Under the field experiment we used a drip irrigation system because their benefit was noted to limit heterogeneity of salinity trials. The chemical composition of the water was presented in the table 3.

Flag leaf area is measured as the means of three independent measurements in three different plants in each plot after flowering. Leaf area was measured by using by Leaf Area meter (LI-200).

Na+ and K+ accumulated in the flag leaf measurements were carried 3 days after flowering. Oven-dried simple flag leaf were finely ground before passing through a 2-mm sieve. About 0.5 g samples for 12 h in digesting tubes with 10 ml concentrated nitric acid and 3ml per chlorate acid, and then digested at 300 C° for 6 h.

The amount of K+ and Na+ contents was measured using an atomic absorption spectrophotometer (Sherwood 410).

Grain production was determined harvesting plants at maturity from the central part of the rows of each plot, excepting 25 cm as a border at each end of the row. The dry weight was determined; the samples were dried at 65 C° for 48 h to determine the dry weight (DM). Data for number of grains per spike, 1000 grain weight, number of spikes per m² and grain yield were recorded.

Data were subjected to analysis of variance (ANOVA) at the 5% and 1% level. The values are expressed as the means of three independent measurement and their standard errors. The differences between the means were compared using a Fisher’s least significant difference (LSD) test at P = 0.05. Statistic analysis was carried out using computer software SPSS 10.

Analysis of variance of flag leaf area, ion accumulation (Na+ and K+) and agronomic traits for sites and genotype factors are presented in Table 4. All traits measured were highly significant (p< 0.001) for sites and cultivars factors. This indicates the existence of genetic diversity of these traits among the wheat cultivars and it is in agreement with the results obtained by Hemati and Pakniyat (2006), who reported variation of these traits in bread and durum wheat cultivars in response to salt stress.

*: significant at the 0.05 probability level

**: Significant at the 0.01 probability level

In present study, salt stress caused a significant decrease of flag leaf area of the most genotypes with the increase of stress treatments except Azizi, Rezzak, Karim, Om Rabia, Nasr, Maali, Khiar and Jneh Khotifa (Figure 1). At 4.7 and 5.2 g/l, for example, leaf area reduced for Agili Glaber respectively by 50% and 60%. Thus, growth of leaf area is inhibited by salinity. Same results were obtained by Brungnoli and Lauteri (1991) and Alberico and Cramer (1993). Richardson and McCree (1985) believe that the greater ability of salinized plants to continue leaf expansion and carbon gain under water stress can be attributed primarily to a slower development of water stress, which prolonged the osmotic adjustment. But, it was thought that leaf area was not reliable indicators of salt tolerance (Alberico and Cramer, 1993). Probably, the negative effect of salinity on plants provoked osmotic potential by salt in the culture medium, so root cells do not obtain required water from medium.

The leaf Na+ concentration was significantly increased by salinity and salinity water logging treatments in all cultivars (Figure 2). A significantly higher Na+ concentration in these treatments was observed in the leaves of landrace genotype. This increase was more significant for Agili Glaber, Richi and Chili genotypes. This increase was not significant for Bayadha and Swebei Algia cultivars which showed high limitation of Na+ accumulation in the flag leaf. A possible survival strategy of these two cultivars under saline environments is the effective compartment of excess Na+ by sequestering Na+ in roots and inhibiting transport of Na+ from roots to shoots. Generally, salinity increased sodium content in salt sensitive wheat cultivars (Sairam et al., 2002; Poustini and Siosemardeh, 2004). Similarly, Ashraf and Oleary (1996) reported that salt tolerance could be correlated with lower leaf accumulation of Na+. According to these reports, it can be concluded that Bayadha and Swebei Algia cultivars lacked the ability of excluding Na+ and it can be the main reason for their salt sensivity.

Although salinity did not affect K+ content, K+ concentration were significantly reduced in all the stress treatments with a greater reduction in the case of landrace genotype (Figure 3). K+ accumulation was less affected by salt stress than Na+ accumulation. High Na+ concentration can induce K+ deficiency inhibiting the activity of enzymes that require K+.

Thus, the interaction between relative K+ and Na+ concentration has been considered to be one of the important physiological mechanisms contributing to salt tolerance in many plant species (Chhipa and Lal, 1995; Ashraf and Khanum, 1997; Willadino and Câmara, 2005). It is well documented that a greater degree of salt tolerance in plant is associated with a more efficient system for selective uptake of K+ over Na+ (Wyn Jones et al., 1984; Noble and Rogers, 1992). Therefore, less Na+ accumulation and more K+ content in Azizi and Bayadha cultivars at the highest salt level, confirm salt tolerance of these cultivars. It seems these cultivars have mechanisms for restricting Na+ inclusion and transporting it to shoot tissues.

Number of spike per m²

Salt stress result in a decrease in number of spike per m² for all genotype. This decrease is not significant for Mahmoudi, Aoudhay, Jneh khotifa, Bdi AP4 and Agili Glaber. The genotype Khiar, Maali, Nasr, Om Rabia and Karim showed the most decrease of the number of spike per m² (Figure 4). Same finding was obtained by Goudarzi and Pakniyat (2008) in fifteen Iranian wheat cultivars.

This parameter showed a reduction with increase of salinity level but the effect was varied in different durum wheat genotypes (Figure 5). The lowest decrease was observed for Mahmoudi, Chili and Ward Bled. Same finding was showed by Akram et al. (2002). According to Francois et al. (1994), the kernels number per spike was affected by reduction in floret viability. Similary, Maas and Grieve (1990) showed that NaCl stressed wheat during apex vegetative stage, had a shorter spikelet development stage, which resulted in fewer spikelets per spike, thus reducing the number of grains per spike. Grieve et al. (1992) found a reduction in kernels per spike of moderately salt stressed wheat and suggested that increase in number of kernels per spikelet lead to grain yield enhancement. Likewise, a considerable reduction for this parameter was recorded in sunflower under saline conditions (Wahid et al., 1999).

Increase in salinity decreased thousand kernels weight in most of genotypes. Maximum thousand kernels weight was produced by Maali followed by Karim and Rezzak, while the lowest was exhibited by Azizi (Figure 6). According Francois et al. (1988), salt stress accelerates maturation and grain filling in some cereal crops. Therefore, nearly consistent reduction in grain weight at the higher salinity levels could be result of shortened grain filling period as reported by Francois et al. (1994). Similarly, Akram et al. (2002) showed that salinity reduced 1000 grain weight.