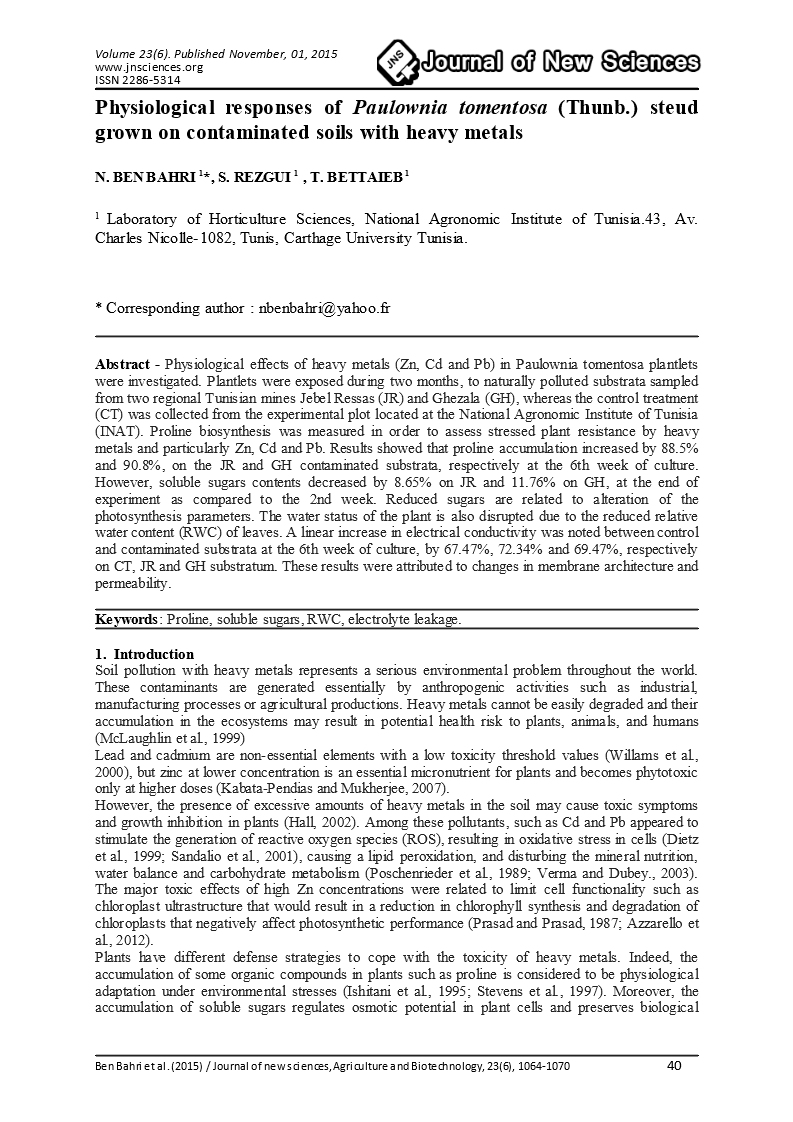 Abstract - Physiological effects of heavy metals (Zn, Cd and Pb) in Paulownia tomentosa plantlets were investigated. Plantlets were exposed during two months, to naturally polluted substrata sampled from two regional Tunisian mines Jebel Ressas (JR) and Ghezala (GH), whereas the control treatment (CT) was collected from the experimental plot located at the National Agronomic Institute of Tunisia (INAT). Proline biosynthesis was measured in order to assess stressed plant resistance by heavy metals and particularly Zn, Cd and Pb. Results showed that proline accumulation increased by 88.5% and 90.8%, on the JR and GH contaminated substrata, respectively at the 6th week of culture. However, soluble sugars contents decreased by 8.65% on JR and 11.76% on GH, at the end of experiment as compared to the 2nd week. Reduced sugars are related to alteration of the photosynthesis parameters. The water status of the plant is also disrupted due to the reduced relative water content (RWC) of leaves. A linear increase in electrical conductivity was noted between control and contaminated substrata at the 6th week of culture, by 67.47%, 72.34% and 69.47%, respectively on CT, JR and GH substratum. These results were attributed to changes in membrane architecture and permeability.

Soil pollution with heavy metals represents a serious environmental problem throughout the world. These contaminants are generated essentially by anthropogenic activities such as industrial, manufacturing processes or agricultural productions. Heavy metals cannot be easily degraded and their accumulation in the ecosystems may result in potential health risk to plants, animals, and humans (McLaughlin et al., 1999)

Lead and cadmium are non-essential elements with a low toxicity threshold values (Willams et al., 2000), but zinc at lower concentration is an essential micronutrient for plants and becomes phytotoxic only at higher doses (Kabata-Pendias and Mukherjee, 2007).

However, the presence of excessive amounts of heavy metals in the soil may cause toxic symptoms and growth inhibition in plants (Hall, 2002). Among these pollutants, such as Cd and Pb appeared to stimulate the generation of reactive oxygen species (ROS), resulting in oxidative stress in cells (Dietz et al., 1999; Sandalio et al., 2001), causing a lipid peroxidation, and disturbing the mineral nutrition, water balance and carbohydrate metabolism (Poschenrieder et al., 1989; Verma and Dubey., 2003). The major toxic effects of high Zn concentrations were related to limit cell functionality such as chloroplast ultrastructure that would result in a reduction in chlorophyll synthesis and degradation of chloroplasts that negatively affect photosynthetic performance (Prasad and Prasad, 1987; Azzarello et al., 2012).

Plants have different defense strategies to cope with the toxicity of heavy metals. Indeed, the accumulation of some organic compounds in plants such as proline is considered to be physiological adaptation under environmental stresses (Ishitani et al., 1995; Stevens et al., 1997). Moreover, the accumulation of soluble sugars regulates osmotic potential in plant cells and preserves biological molecules and membranes Paulownia tomentosa (Thunb.) Steud,with high concentrations of Zn and Pb accumulation, indicated a phytoremediation potential and could be used for a phytoextraction of Zn and Pb (Ben Bahri et al., 2015).

In this study, proline, soluble sugars contents and water relation components were determined to reflect the physiological responses of Paulownia tomentosa growing on substrata containing Zn, Pb and Cd.

The experimental was conducted at the Horticulture Science Laboratory of the National Agronomic Institute of Tunisia (INAT). It was arranged in a completely randomized design with 6 replicates for each substratum.

Pots were maintained in greenhouse at 17-29 ºC, supplied with natural sunlight (photoperiod varying from 13 to 16 h) and a relative humidity between 43% and 67%, from May, 1st to 30th June. The containers were watered daily with deionized water. After 12 weeks, control and treated plants were harvested and used for analysis.

Proline was estimated calorimetrically as ninhydrine complex in toluene (Troll and Lindesly, 1955). The photometric absorbance of the Toluene extract was carried out using a spectrophotometer (JENWAY, Model 6505, UK) at a wavelength of 528 nm using a standard curve of proline.

The amounts of soluble sugars were measured by phenol-sulfuric acid method (Robyt and White, 1987). The absorbance was read by a spectrophotometer (JENWAY, Model 6505, UK) at a wavelength of 640 nm and sugars concentrations were calculated using a standard curve of glucose.

Relative water content (RWC) was determined by measuring fresh (FW), hydrated (TW) (24h, at 4°C in the dark on contact with a moist filter paper) and oven dry weights (DW) of leaf disks (Barrs and Weatherley, 1962).

The degree of cell membrane injury induced by heavy metals may be estimated through measurements of electrolyte leakage from the leaves tissues (Nayyar et al., 2005).

For measuring electrolyte leakage (EL), samples were thoroughly washed with deionized water to remove surface adhered electrolyte and then kept in closed vials containing 10 mL of deionized water and incubated at 25°c for 24 h on a shaker and consequently electrical conductivity (C1) was determined by a conductivity meter (Consort C 830). Samples were then kept at 120°C for 20 min and the final electrical conductivity (C2) was obtained after getting equilibrium at 25°C. EL was calculated using the following equation:

The statistical significance of the results was analyzed using one-way analysis of variance (ANOVA), with the option of LSD to compare treatment means using proc anova of SAS (9.0).

Selected physico-chemical characteristics of the three substrata: Tunis (CT), Jebel Ressas (JR) and Ghezala (GH) were determined and their values are summarized in table 1.

The high levels of Zn, Pb and Cd in JR and GH in substrata (Table 2) induced increases of proline synthesis in Paulownia tomentosa plantlets (Figure 1).

This essential amino acid is considered as an indicator of stress in plants (Szabados and Savopuré 2010). It is an osmoregulator that protects enzymes, prevents denaturation of macromolecules, confers rigidity to the cell membrane and scavenges hydroxyl radicals (Kuznetsov and Svyakova, 1997; Di Toppi and Gabbrielli, 1999). The accumulation of proline would enhance the activity of antioxidant enzymes and reduce the level of FAO in cells (Jiang et al., 1997).

According to Wang et al. (2010), heavy metal stress (Cd and Pb) imposed during the culture period of Paulownia fortunei plantlets increased proline biosynthesis. However, plantlets exposed to Zn are not different to control one. This specie appeared to have more effective defense mechanisms against Cd and Pb than Zn. Similar results were found by Zhiqiang et al., (2009) on cabbage cultivars suggesting that the synthesis of proline is considered as resistance mechanism to stressed plants grown under Cd and Pb.

Soluble sugars are synthesized during photosynthesis and degraded during respiration by plants. Several studies reported the negative effects of heavy metals on higher plants photosynthesis (Mishra and Dubey, 2005). Bhardwaj et al., (2009) reported that the exposure of Phaseolus vulgaris to excessive doses of Pb and Cd resulted in a reduction of sugar contents in leaves tissues. Pandey and Tripathi (2011) have also described that increasing Cd , Pb and As concentrations (1, 5 and 10 ppm) induce significant reduction in soluble sugars in Albizia procera. Kumar et al., (2012) demonstrated that the exposure of wheat seedlings to high Zn doses leads to a decline in total sugar contents. This result may be due to the cycles of carbohydrate catabolism and related enzymatic reactions (Rabie et al., 1992).

Conversely, several researches suggested that metal stress imposed during the culture period of some species increased biosynthesis of soluble sugars in their tissues (Guo et al., 2007; Farshad et al, 2013). These results would be estimated as an adaptation mechanism by the plants to maintain a favorable osmotic potential in cells and led to the preservation of biological molecules and membranes (Farshad et al., 2013).

Analysis of variance for the Relative water content (RWC) indicated that there was a significant difference between the three substrata CT, JR and GH (Figure 3).

The RWC in GH substratum showed the highest percentage (45.8%) (Figure 3). However, the RWC decreased by 18.41 and 34.4% for plants grown in CT and JR substrata, respectively as compared to plants growing in GH substratum. These results indicated that the water status of Paulownia leaf tissue was affected by the presence of heavy metals in growing substrata, and also by the high temperatures during the months of May and June in glasshouse. Aghaz et al., (2013) observed a decline in RWC related to the increased stress intensity in Anethum graveolens. This reduction can be explained by the decrease of the water absorption through the roots (Alsokari and Aldesuquy, 2011). Heavy metals inhibit normal physiological and biochemical processes in Paulownia tomentosa plantlets causing a reduction in plant growth and chlorophyll biosynthesis (Ben Bahri et al., 2015). In this study, phototoxic symptoms was observed as a result of heavy metal treatment and lead to cell turgidity and respiration disturbances, which is induced by the increased level of abscisic acid (ABA) to limit evapotranspiration and water losses (Di Sanita toppi and Gabrielli, 1999; Costa et al., 2009; Alsokari and Aldesuquy, 2011).

The degree of membrane disruption in Paulownia plantlets, which is represented by electrolyte leakage, was affected by heavy metal (Zn, Pb and Cd) concentrations in the three substrata CT, JR and GH and by the time of exposure to stress. The percentages of electrolyte leakage in Paulownia leaves under metallic stress are shown in Figure 4. This parameter increased significantly from control to contaminated substrata and ranged from 67.47% for CT, 69.47% for GH and 72.34% for JR, at the 6th week of culture. The presence of heavy metals in the culture substratum of Paulownia tomentosa has significantly altered the electrolyte leakage resulting in a reduction of water level in the cells. According to Fodor et al., (1995) this was attributed to the functionality of plasma membranes by inducing lipid peroxidation. This fact was in agreement with previous research in some other plant species such as Anethum graveolens, Brassica, Phaseolus vulgaris (Aghaz et al., 2013; Bhardwaj et al., 2009; Mobin and Khan, 2006). Results of this investigation suggest that heavy metals may favor architectural changes of the membrane and its permeability (Jensen and Adal-Steinsson, 1989). Therefore, Green et al., (1980) reported that damage to the plasma membrane was associated to metals interaction with the phospholipids.

However, soluble sugar contents slightly decreased at the end of experiment in comparison to the 2nd week. The effect of contaminated substratum on water status of the plant was more pronounced in response to heavy metal concentrations in the substrata by reducing relative water content of leaves and increasing the electrolyte leakage between control and contaminated substratum at the end of Culture.

Fodor E, Szabo NA, Erdei L (1995) The effects of cadmium on the fluidity and H+‐ATPase activity of plasma membrane from sunflower and wheat roots. Journal of Plant Physiology 147: 87‐92.

Kumar V, Awasthi G, Chauhan PK (2012) Cu and Zn tolerance and responses of the Biochemical and Physiochemical system of Wheat. Journal of Stress Physiology and Biochemistry 8 (3): 203-213.

Rabie MH, Eleiwa ME , Aboseoud MA, Khalil KM (1992) Effect of nickel on the content of carbohydrate and some mineral in corn and broad bean plant. Journal of King Abdulaziz University-Science 4:37-43.

Troll W, Lindsley J (1955) A photometric method for the determination of proline. Journal of