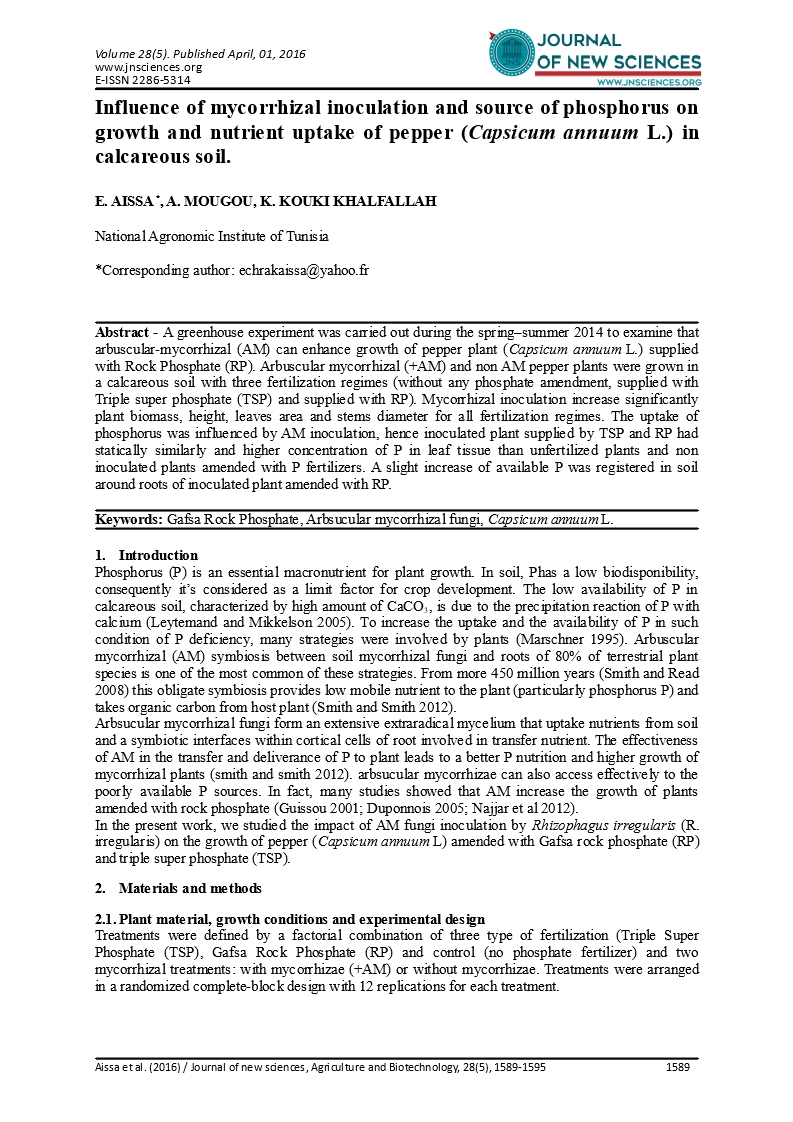 Abstract - A greenhouse experiment was carried out during the spring–summer 2014 to examine that arbuscular-mycorrhizal (AM) can enhance growth of pepper plant (Capsicum annuum L.) supplied with Rock Phosphate (RP). Arbuscular mycorrhizal (+AM) and non AM pepper plants were grown in a calcareous soil with three fertilization regimes (without any phosphate amendment, supplied with Triple super phosphate (TSP) and supplied with RP). Mycorrhizal inoculation increase significantly plant biomass, height, leaves area and stems diameter for all fertilization regimes. The uptake of phosphorus was influenced by AM inoculation, hence inoculated plant supplied by TSP and RP had statically similarly and higher concentration of P in leaf tissue than unfertilized plants and non inoculated plants amended with P fertilizers. A slight increase of available P was registered in soil around roots of inoculated plant amended with RP.

Phosphorus (P) is an essential macronutrient for plant growth. In soil, Phas a low biodisponibility, consequently it’s considered as a limit factor for crop development. The low availability of P in calcareous soil, characterized by high amount of CaCO3, is due to the precipitation reaction of P with calcium (Leytemand and Mikkelson 2005). To increase the uptake and the availability of P in such condition of P deficiency, many strategies were involved by plants (Marschner 1995). Arbuscular mycorrhizal (AM) symbiosis between soil mycorrhizal fungi and roots of 80% of terrestrial plant species is one of the most common of these strategies. From more 450 million years (Smith and Read 2008) this obligate symbiosis provides low mobile nutrient to the plant (particularly phosphorus P) and takes organic carbon from host plant (Smith and Smith 2012).

Arbsucular mycorrhizal fungi form an extensive extraradical mycelium that uptake nutrients from soil and a symbiotic interfaces within cortical cells of root involved in transfer nutrient. The effectiveness of AM in the transfer and deliverance of P to plant leads to a better P nutrition and higher growth of mycorrhizal plants (smith and smith 2012). arbsucular mycorrhizae can also access effectively to the poorly available P sources. In fact, many studies showed that AM increase the growth of plants amended with rock phosphate (Guissou 2001; Duponnois 2005; Najjar et al 2012).

In the present work, we studied the impact of AM fungi inoculation by Rhizophagus irregularis (R. irregularis) on the growth of pepper (Capsicum annuum L) amended with Gafsa rock phosphate (RP) and triple super phosphate (TSP).

Treatments were defined by a factorial combination of three type of fertilization (Triple Super Phosphate (TSP), Gafsa Rock Phosphate (RP) and control (no phosphate fertilizer) and two mycorrhizal treatments: with mycorrhizae (+AM) or without mycorrhizae. Treatments were arranged in a randomized complete-block design with 12 replications for each treatment.

Inoculated plants received a commercial mycorrhizal inoculum carrying R. irregularis (50 spores g−1) by mixing 2L germination substrate with 84 g of inoculum and at the transplantion inoculum was added in the hole transplanting at a rate of 1,5 g per plant. P2O5 content of phosphate fertilizers were 28.6% for PR and 45% for TSP Phosphorus was applied before transplanting by mixing 300 mg Kg-1 of P2O5 to the mixture soil as Gafsa Rock Phosphate for RP treatments and TSP for TSP treatments. Plants were irrigated with a nutrient solution containing: 14.0 mM N–NO3, 1.6 mM S, 6.0 mM K, 4.5 mM Ca, 1.5 mM Mg, 20 μM Fe, 9 μM Mn, 0.3 μM Cu, 1.6 μM Zn, 20 μM B, and 0.3 μM Mo.

To determine chlorophyll index, a chlorophyll meter (Minolta SPAD-502) was used to take SPAD values (SPAD units). Measures were taken from the fully expanded functional leaves (the fourth from the apex) four times in the growing cycle (25, 38, 56 and 70 days after transplanting).

At the end of experiment (71 days after transplanting), plants were separated into stems, leaves, and roots. Leaves area was determined by LI-3000 A planimeter and stems diameter by Art. C041/150 electronic digital caliper. Shoot and roots were separately washed with distilled water to remove any adhering debris. Subsamples of roots were saved for assessment of AM-fungi root colonization. All plant tissues were dried in a forced-air oven at 75° C for 72 h for biomass determination. Dried leaves were ground and 0.5 g of the dried tissues was analyzed for the following macronutrients: N, P, K, Ca, Mg. N concentration of leaf. N was determined after mineralization with sulfuric acid using Kjeldahl method (Bremner, 1965). P, K, Ca, Mg, concentrations were determined after dry-ashing at 400°C for 24 h and dissolving the ash in HNO3 1:20. P were determined by the molybdenum blue method (Murphy and Riley, 1962) whereas K, Ca were determined by flame photometry and Mg by atomic adsorption spectrometry.

A fraction of the roots samples were cleared with 10% KOH at 90°C, acidified in 2% HCl for 5 minutes and stained with 0.05% trypan blue in lactophenol as described by Phillips and Hayman (1970), and examined microscopically for AMF colonization by determining the percentage of root segments containing arbuscules + vesicles using a gridline intercept method (Giovannetti and Mosse, 1980).

At the end of the experiment, soil samples from pots of each treatment were analyzed for changes in soil-available P and pH. A composite sample from each pot was collected and air-dried for 3 days. The soil-available P was determined using sodium bicarbonate extractable phosphorus colorimetric method (Olsen et al, 1954). The soil pH was determined using a glass electrode in a 1:2.5 (v/v) soil–water.

All data were statistically analyzed by ANOVA using the SPSS software package (SPSS 10 for Windows; SPSS, 2001). Duncan’s multiple range test was performed at p = 0.05 on each of the significant variables measured

Type of fertilization had a significant effect on the rate of roots mycorhization (figure 1). Plants that received RP had higher mycorrhization (81,2%) than plant fertilized with TSP (22%). Plants without phosphate fertilizer showed a rate of mycorhization significantly similar to that observed in roots of RP treatment (78,5%).

71 days after transplantation, growth parameter (Table 1) were highly influenced by type of P fertilization and AM inoculation. Plant of P0 and RP treatment had a poor and statically similar growth parameter. In comparison to non inoculated plants, AM inoculation increased plant’s high, leaves area, leaves number and diameter of stem respectively by 40, 77, 85 and 24% for unfertilized plants and by 61, 86, 92 and 41% for plants supplied with RP. Inoculated plants of TSP treatment had statically similar high and leaves number to non mycorrhizal plants but had higher leaves area and stem diameter respectively by 13% and 30%. In comparison with TSP treatment, Plants of RP +AM had higher plant and produced more leaves but produced less flowers.

For control, Triple Super Phosphate and Rock Phosphate amendment, pepper plant showed a positive response to mycorrhizal inoculation. Dry weight, plant height, stem diameter and leaves area were higher in inoculated plants for each P treatment. Plants amended with TSP showed the highest growth because of immediately release of Pi in soil solution from TSP. Our results showed that mycorrhizal plant had better growth than non mycorrhizal plant of TSP treatment. Jujube plant inoculated by Rhizophagus irregularis and fertilized with different levels of TSP had a higher DM than non inoculated plant (Guissou 2001). Tanwar et al. (2013) observed that mycorrhizal inoculation promote growth of pepper in different level of TSP supply. The increase of growth by mycorrhizal inoculation was more pronounced in pepper plant fertilized with rock phosphate. In RP treatment, non inoculated plant had no growth response due to the low solubility of RP in calcareous soil. The very low effectiveness of RP in non acidic soil is very well documented (Chien & Menon 1995). Pepper inoculated by AM fungi showed a positive response into RP application for biomass accumulation. This is an accordance with other results on jujube (Guissou 2001), acacia ((Duponnois et al. 2005), bean and maize (Najjar et al. 2012)

In this work, inoculated plant amended with TSP and RP had the highest P status. Mycorrhizal plants of TSP treatment had better P status than non mycorrhizal plants even there is no significant difference between soil levels of Pi of these tow treatments at the end of the experiment. In fact the amount of Pi around roots decrease rapidly thus P concentration around hyphae of mycorhhizae is higher than that near roots. This efficiency in P uptake of mycorrhizal plants amended with TSP was observed with only 20% of mycorrhization. This low percentage is contributed to the decrease of AM colonization at High concentration of Pi in soil solution (Nagy et al. 2009; Balzergue et al. 2011). For control and RP treatment, AM colonization was high due to the low initial amount of available Pi in the soil and the low availability of Pi from RP that prevent the inhibition of mycorrhizal association. For mycorrhizal inoculated treatement, plants amended with RP had high leaves P content. Moreover, the final amount of Pi in soil was slightly higher in RP treatment than in control, control+ AM, and RP treatment. We suggested that AM fungi can solubilize locally RP than absorb and transfer quickly the Pi solubilized to the plant host. The contribution of RP in P nutrition of mycorrhizal plants was demonstrated by Toro et al. (1997). They used radioactive 32P and showed that plants inoculated with Rhizophagus irregularis had lower speciﬁc activity (32P/31P) than non inoculated plants, suggesting that mycorrhizal plant used RP as source of P not available for non mycorrhizal plant. Moreover, our measurement showed that the slight increase of Pav in mycorrhizal treatment of the control and RP amendment was associated with a low drop of the pH. This decrease of pH could be due to the release of organic acids and protons (Najjar et al. 2012) but mechanisms by which AM symbiosis can mobilize P from RP is still not very well understood (Bolan 1991; Antunes et al. 2007; Smith and Smith 2012).

The uptake of K+ was improved with AM inoculation. Smith et al. (1981) observed that the decrease of P availability in soil leaded to an increase of K+ content in mycorrhizal Trifolium. Satter et al. (2006) showed that AM fungi improve P and K uptake for acacia seedling amended with Gafsa RP. Olsson et al.( 2008) reported a strong correlation between K+ and P during mycorrhizal symbiosis with Rhizophagus irregularis. According to Garcia and Zimmermann (2014), K+ is involved in the homeostasis and transfer of inorganic phosphate in the mycorrhizal association.

Mycorrhizal inoculation increased significantly plant biomass, height, leaf area and stem diameter for each phosphate treatment. The uptake of phosphorus was influenced by AM inoculation. Inoculated plant supplied by Triple Super Phosphate and Rock Phosphate had statically similarly and the highest growth. Moreover, our measurement showed that the slight increase of Pav for mycorrhizal treatment of the control and RP amendment was associated with a low drop of the pH. We can conclude that AM can access effectively to the RP, thus mycorrhizal plant used RP as source of P not available for non mycorrhizal plant.

Deniz A.(2004) Influence of Arbuscular Mycorrhiza on Some Physiological Growth Parameters of Pepper, 28, 85–90.

Giovannetti M, Mosse B. 1980. An evaluation of techniques for measuring vesicular-arbuscular infection in roots. New Phytologist 84, 489–500.