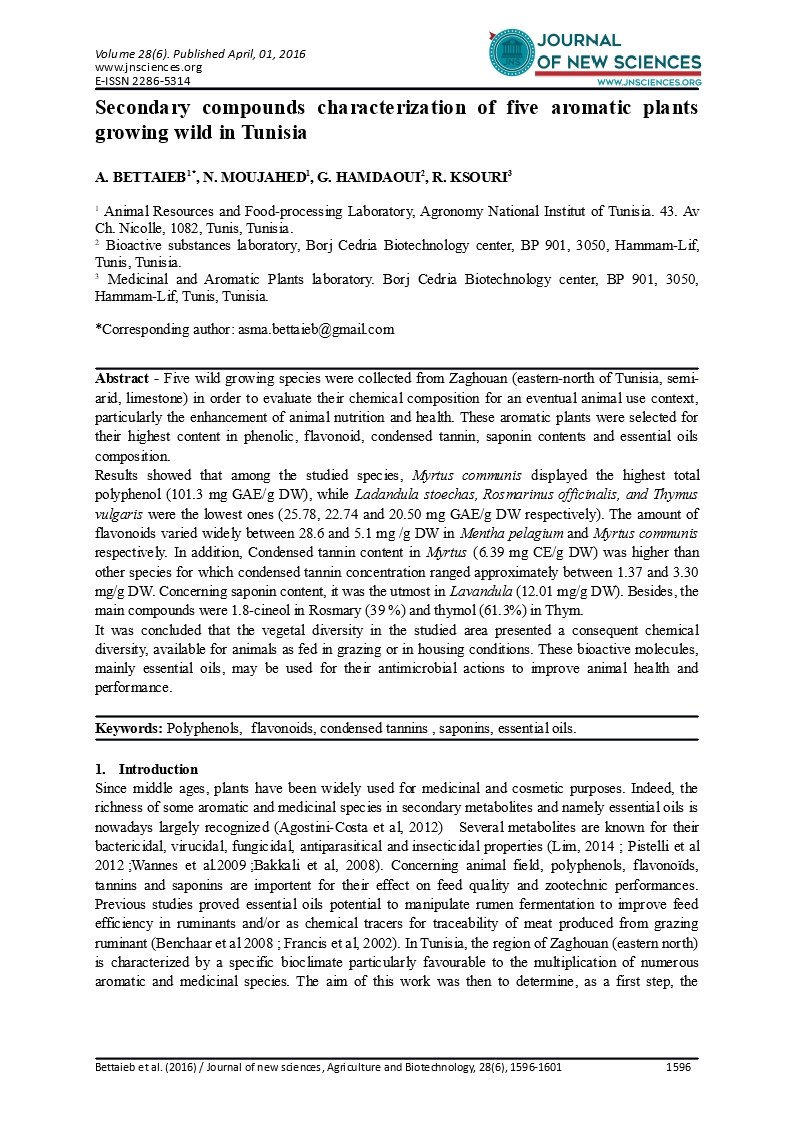 Abstract - Five wild growing species were collected from Zaghouan (eastern-north of Tunisia, semi-arid, limestone) in order to evaluate their chemical composition for an eventual animal use context, particularly the enhancement of animal nutrition and health. These aromatic plants were selected for their highest content in phenolic, flavonoid, condensed tannin, saponin contents and essential oils composition. Results showed that among the studied species, Myrtus communis displayed the highest total polyphenol (101.3 mg GAE/g DW), while Ladandula stoechas, Rosmarinus officinalis, and Thymus vulgaris were the lowest ones (25.78, 22.74 and 20.50 mg GAE/g DW respectively). The amount of flavonoids varied widely between 28.6 and 5.1 mg /g DW in Mentha pelagium and Myrtus communis respectively. In addition, Condensed tannin content in Myrtus (6.39 mg CE/g DW) was higher than other species for which condensed tannin concentration ranged approximately between 1.37 and 3.30 mg/g DW. Concerning saponin content, it was the utmost in Lavandula (12.01 mg/g DW). Besides, the main compounds were 1.8-cineol in Rosmary (39 %) and thymol (61.3%) in Thym. It was concluded that the vegetal diversity in the studied area presented a consequent chemical diversity, available for animals as fed in grazing or in housing conditions. These bioactive molecules, mainly essential oils, may be used for their antimicrobial actions to improve animal health and performance.

Since middle ages, plants have been widely used for medicinal and cosmetic purposes. Indeed, the richness of some aromatic and medicinal species in secondary metabolites and namely essential oils is nowadays largely recognized (Agostini-Costa et al, 2012)  Several metabolites are known for their bactericidal, virucidal, fungicidal, antiparasitical and insecticidal properties (Lim, 2014 ; Pistelli et al 2012 ;Wannes et al.2009 ;Bakkali et al, 2008). Concerning animal field, polyphenols, flavonoïds, tannins and saponins are importent for their effect on feed quality and zootechnic performances. Previous studies proved essential oils potential to manipulate rumen fermentation to improve feed efficiency in ruminants and/or as chemical tracers for traceability of meat produced from grazing ruminant (Benchaar et al 2008 ; Francis et al, 2002). In Tunisia, the region of Zaghouan (eastern north) is characterized by a specific bioclimate particularly favourable to the multiplication of numerous aromatic and medicinal species. The aim of this work was then to determine, as a first step, the composition of some of these autochton species (essential oils and secondary metabolites) in order to study in fine their zootechnic effect.

Rosmarinus officinalis, Thymus vulgaris, Mentha pelagium, Myrtus communis and Lavandula stoechas. A voucher specimen has been kept in our unit for future reference. The sampling was done during the period of spring 2011 by a randomized collection from 15-20 plants in an area of about 200 m2. Plant leaves and twigs were collected in flowering stage. The plant dry matter (DM) content was determined at 105°C in a forced-air oven.

Two types of plant secondary metabolites were extracted during this study: methanolic extracts and essential oils. For the methanolic extracts, prior to analysis, the harvested material was dried at 40°C during 48 h and then ground to pass through 1 mm sieve and stored in obscurity. Extracts were obtained by magnetic stirring of 2.5 g dry powder in 25 ml methanol/water (80v/20v) for 30 min. Extracts were kept for 24 h at 4°C, filtered through a Whatman no. 4 filter paper, then, they were stored at 4°C. Methanolic secondary metabolites were analyzed for their total phenolic, flavonoid, condensed tannins and saponin contents. For the analysis of essential oil, plant samples were air dried for 10 days. Three lots of 800 g of each plant leaves and twigs were hydro-distillated for 2 h (time duration fixed after a kinetic survey during 30, 60, 90, 120, 150, 180 and 210 min, data not shown).The volatile compounds collected through hydro-distillation were wrapped in aluminium foil to protect them from light degradation and stored at 4°C until GC/MS analysis.

Total phenolic content of the methanolic extracts was determined using Folin–Ciocalteu reagent slightly modified by Dewanto et al. (2002) using gallic acid as a standard (0–400 µg/ml range). An aliquot of diluted sample extract was added to 0.5 ml of distilled water and 0.125 ml of the Folin–Ciocalteu reagent. The mixture was shaken and allowed to stand for 6 min, before addition of 1.25 ml of 7% Na2CO3. The solution was then adjusted with distilled water to a final volume of 3 ml and mixed thouroughly, and held for 90 min at ambient temperature. After incubation in dark, the absorbance at 760 nm was recorded. Total phenolic content of plant parts was expressed as milligrammes of gallic acid equivalents per gramme of dry weight (mg GAE/ g DW) through the calibration curve with gallic acid. All samples were analyzed in triplicates.

Total flavonoid content was measured using a colorimetric assay developed by Dewanto et al. (2002). An aliquot of diluted sample or standard solution of (+)-catechin was added to 75 µl of NaNO2 solution (7%), and mixed for 6 min, before adding 0.15 ml AlCl3 (10%). After 5 min, 0.5 ml of 1 M NaOH solution was added. The final volume was adjusted to 2.5 ml, thoroughly fixed, and the absorbance of the mixture was determined at 510 nm. Total flavonoid content was expressed as mg (+)-catechin equivalent per gramme of dry weight (mg CE/g DW), through the calibration curve of (+)-catechin (0–400 µg/ml range). All samples were analyzed in triplicates.

The total condensed tannin content was determined by spectrophotometric method (Sun et al.,1998). Three millilitres of 4% methanol vanillin solution and 1.5 ml of concentrated H2SO4 were added to 50 µl of suitably diluted sample. The mixture was allowed to stand for 15 min, and the absorbance was measured at 500 nm against solvent as a blank. The amount of total condensed tannins is expressed as mg (+)-catechin/g DW. The calibration curve range of catechin was established between 0 and 400 µg/ml. All samples were analyzed in triplicates.

The saponin content was determined by spectrophotometic method (Hiai, 1976). One a half millilitres of methanol vanillin and 2,5 ml of concentrate H2SO4 were added to 50 µl of suitably diluted sample. The mixture was immediately incubated in an ice bath then in 60 °C for 10 mn and reincubated in an ice bath. The absorbance was measured at 544 nm. The amount of saponin is expressed as mg diosgenin/g DW. All samples were analyzed in triplicates.

Essential oils composition was assessed using Gas chromatography–mass spectrometry (GC/MS) analysis. This analysis was performed on an HP 5972 mass spectrometer (Agilent technologies, Palo Alto, California, USA) with electron impact ionization (70 eV). An HP-5MS capillary column (30 m-0.25 mm coated with 5% phenyl methyl silicone, 95% dimethylpolysiloxane, 0.25 lm film thickness) was used. Oven temperature was programmed to rise from 50 to 240 °C at a rate of 5°C/min; transfer line temperature was 250°C. The carrier gas was He with a flow rate of 1.2 ml/min and a split ratio of 60:1. Scan time and mass range were 1 s and 40–300 m/z, respectively. The identification of volatile compounds was made by matching their recorded mass spectra with those stored in the Wiley/NBS mass spectral library of the GC/MS data system and other published mass spectra (Adams, 2001). Determination of the percentage composition was based on peak area normalization without using correction factors.

Methanolic extracts of the different studied species were characterized. Secondary compounds composition is given in Table 1. As far as total polyphenols are concerned, the analysis of these data showed 3 groups of phenolic contents: the group 1 contained the highest level of phenolics: 101.3 GAE/g DM for Myrtus. The group 2 held a medium level specie which is Mentha pelagium: 56.20 GAE/g DM. The group 3 represented the lowest levels of phenolic content which are comprised between 20.50 and 25.78 GAE/g DM for Lavandula, Rosmarinus and Thymus; decreased by level. For this last group, Wojdylo et al. (2007), adding reagents to prevent oxidative losses of phenols, reported a higher content for Rosmarinus officinalis (171 mg GAE/g DM) and Thymus vulgaris (58 mg GAE/g DM). Concerning flavonoids, the group 1 held high content species: 28.56, 23.1 and 22.4 mg CE/g DM for Mentha, Lavandula and Rosmarinus, respectively. Content was lower for group 2 and 10.71 mg CE/g DM was found for Thymus. For this specie, Eghdami et al. (2013) reported 4.30 (QE)/g and Marculescu et al. (2008) 0.485% of rutosid. The lowest content was observed in group 3 represented by Myrtus (5.14 mg CE/g DM). We deduced that the classification according to polyphenols richness is not conserved for flavonoids. In fact, the polyphenols richest specie (Myrtus) is the lowest in flavonoids. In addition, Mentha which is richest in flavonoids is relatively rich en polyphenols. According to condensed tanins content, we found in group 1 (6.39 mg CE/g DM) Myrtus and Mentha in group 2 (3.30 and 2.18 mg CE/g DM, respectively). Concerning group 3 tanins are 1.34 mg CE/g DM for Thymus vulgaris and and 1.37 mg CE/g DM for Rosmarinus. Lavandula stoechas exhibited the highest saponins content: 12.01 mg DE/g DM, all others were almost 7 mg DE/g DM. We point out that secondary metabolites determination of this species were earlier estimated in literature. However, the results of these studies are difficult to compare with our results because of different extract nature and extraction methods. Some authors gave the amounts of metabolites as mass in weight of fresh herb or extract or by referring to another standard.

For Rosmary, the most abundant mediterranean Lamiacea, we found 1.8-cineol (39.00 %), Borneol (9.83 %), α-pinene (9.03 %) and Camphor (8.45 %). Literature mentioned that, the amount of these components distinguishes the 3 rosemary chemotypes which are: the 1.8-cineol specific to Italy, France, Morocco, Tunisia, Turkey, Greece and Yugoslavia (over than 40%) (Pintore et al., 2002); the Camphor-borneol: in Spain and the α-pinene-verbenone in Algeria and Corsica (Guazzi et al., 2001). Thus, different less abundant chemotypes have been reported in these areas, the Camphor chemotype (28%) was mentioned in the very hot regions of Tunisia and Turkey (Matmata and Mersin) while the 1,8-cineol chemotype in the cool and moderately hot climate (Celiktas et al., 2007; Zaouali et al., 2008). These three chemotypes have been reported in different regions in Spain and Morocco. Many authors explained the antibacterial and antioxidant effect of rosemary by the presence of 1.8-cineol (Oyedemi et al., 2009). As far as Thymus vulgaris is concerned, its essential oil exhibited the higher chemotype proportion: thymol (61.32%). Secondary components are largely inferior to thymol: we find γ-terpinene (7.68 %) and β-cymene (7.58 %). Our results are on line with several researches which all confirmed that thymol is the major compound (≈ 45%) (Hudaib et al., 2002; Ozcan and Chalchat, 2004; Nezhadali et al., 2010). Starting material for the manufacturing of 1-menthol, the thymol is used as disinfectant and antioxidant (BG Chemie, 2000). As it was reported by several authors, Zaouali et al.(2008), Yadegarinia et al.(2006), Chalchat et al.(1998), we found that the chemotype in Myrtus communis, is α-pinene (29.47 %) charactersitic of Tunisia. However, the main components are different from other results reported in Tunisia, Morocco and Greece since the level of limonene and linalool are higher, depending on the 1-8 cineol level (Snoussi et al.,2008; Viuda-Martos et al., 2007; Abidi-wannes et al., 2010). Gardely et al. (2008) has reported that myrtenyl acetate chemotype (23 to 37%) which exists as trace in other studies. The polymerisation of this α-pinene is mainly used to make the camphene, compound of many commercial chemicals such as isoborneol, isobornyl acetate and camphor (Chimal-Valencia et al., 2004). The variability of results and differences with several studies mainly in the Mediterranean regions may reflect the most important variability factors of essential oil contents and composition intrinsic factors such as vegetative cycle and studied organ in addition to intrinsic factors such as climatic and environmental conditions (Baser and Buchbaurer, 2010 ; Zaouali et al., 2008 ; Celiktas et al., 2007 ;Hudaib et al., 2002).

The vegetal diversity in the studied area presented a consequent chemical diversity, available for animals as fed in grazing or in housing conditions. These substances, mainly essential oils, may be used for their antimicrobial actions to improve animal health and performances. In this connection, in vitro studies are currently carried out in our laboratory.

Chimal-Valencia, O., Robau-Sánchez, A., Collins-Martínez, V., Aguilar-Elguézabal, A. (2004) Ion exchange resins as catalyst for the isomerization of α-pinene to camphene. Bioresource Technol.93:2, 119–123.